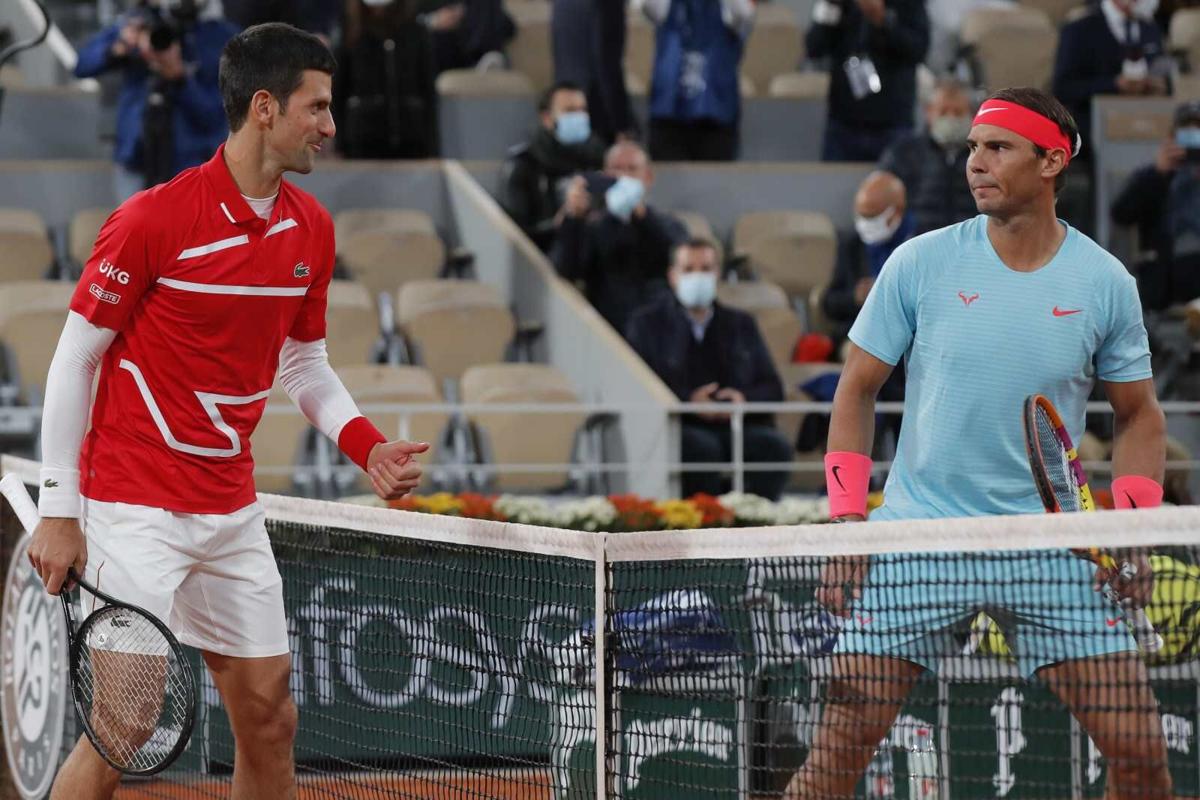 Serbia’s Novak Djokovic, left, and Spain’s Rafael Nadal look at each other as they pose for images prior to the final match of the French Open tennis tournament at the Roland Garros stadium in Paris, France, Sunday, Oct. 11. 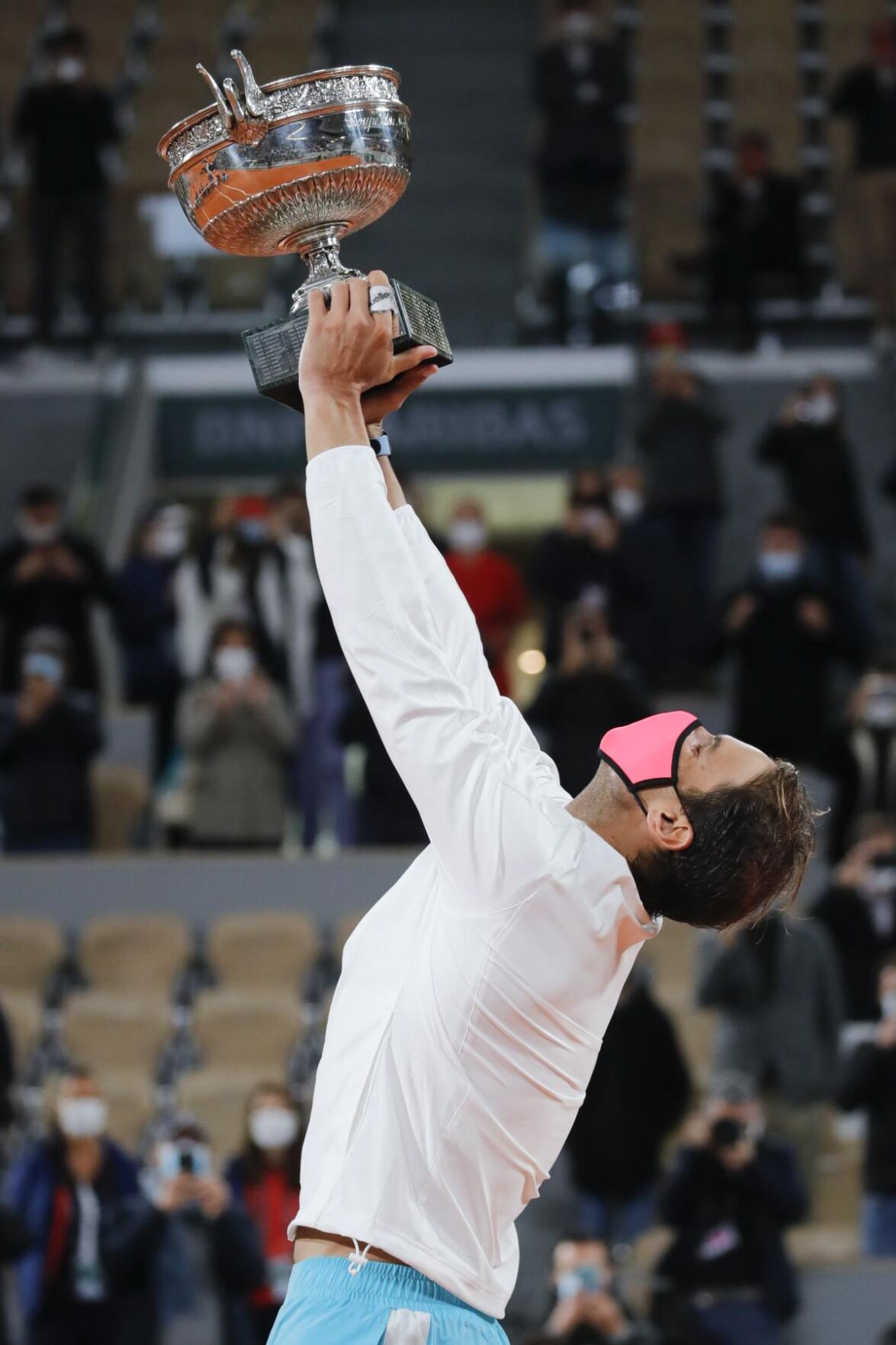 Spain’s Rafael Nadal holds the trophy as he celebrates winning the final match of the French Open tennis tournament against Serbia’s Novak Djokovic in three sets, 6-0, 6-2, 7-5, at the Roland Garros stadium in Paris, France.

Serbia’s Novak Djokovic, left, and Spain’s Rafael Nadal look at each other as they pose for images prior to the final match of the French Open tennis tournament at the Roland Garros stadium in Paris, France, Sunday, Oct. 11.

Spain’s Rafael Nadal holds the trophy as he celebrates winning the final match of the French Open tennis tournament against Serbia’s Novak Djokovic in three sets, 6-0, 6-2, 7-5, at the Roland Garros stadium in Paris, France.

Nadal equaled long-time rival Federer for the most major singles tennis championships won by a man and added to his own record at Roland Garros with No. 13 on the red clay, courtesty of a surprisingly dominant 6-0, 6-2, 7-5 victory over the No. 1-ranked Djokovic on Sunday.

When Nadal ended it with an ace, he dropped to his knees, smiled widely and pumped his arms.

He did not cede a set in his favorite tournament this year.

“The love story that I have with this city, and with this court, is unforgettable,” Nadal said.

He deflected a question during the on-court, post-match interview about catching Federer, saying his focus remained squarely on the French Open.

Nadal, No. 2 in the rankings, improved to 100-2 at the French Open, including a combined 26-0 in semifinals and finals, and picked up his fourth consecutive title in Paris. The 34-year-old left-hander from Spain previously put together streaks of four French Open championships from 2005-08, then five in a row from 2010-14, to go alongside his four trophies at the U.S. Open, two at Wimbledon and one at the Australian Open.

Nadal is now even with Federer for the first time since each man had zero Slams to his name in 2003. Federer’s first arrived at Wimbledon that year; Nadal, naturally, earned his first in France in 2005, by which point he trailed 4-0.

Nadal is the oldest French Open champion since 1972 and the more than 15 years between his first and most recent Grand Slam titles is the longest such span for a man.

This was the 56th installment of Nadal vs. Djokovic, the most meetings between any pair of men in the professional era, and their ninth in a Grand Slam final, equaling Nadal vs. Federer for the most.

The key statistic: Nadal limited his unforced errors to 14 across 183 points, impressive against anyone, but especially someone the caliber of Djokovic, who accumulated 52.

The much-anticipated matchup between these two titans of their sport was the first indoor French Open men’s final, contested under Court Philippe Chatrier’s new retractable roof. The day began with a blue sky and sunshine, but dark clouds eventually gathered, and when rain came about a half-hour before the scheduled start, the cover was shut.

From its stand in the VIP section, the trophy, La Coupe des Mousquetaires, glistened under the electric lighting that did away with the sharp contrasts of light and shadow seen on the court under the autumnal afternoon sun.

This also was the first French Open contested with players walking on court wearing masks on account of the coronavirus pandemic, the reason the 15-day event was shifted from May-June to September-October and crowds were limited to 1,000 per day. On Sunday, those lucky enough to attend mainly were concentrated in not-very-socially-distanced dense clumps in the first 20 or so rows; the roof helped amplify cheers and roars reverberating around the enclosed space.

Perhaps owing to the lopsided nature of this final, though, they often were silent, so much so that the sound of Djokovic peeling the plastic cover off a new racket could be heard.

The postponement led to colder, wetter weather than usual, which affects the way the clay affects shots, making them bounce lower and slower. There was a school of thought that could hinder Nadal, as would this year’s change to a slighty heavier tennis ball.

So much for that.

What didn’t Nadal do well all tournament and on this historic day?

He dealt with Djokovic’s predilection for drop shots much better than previous foes of the 33-year-old Serb, using anticipation and speed to dim that strategy’s success.

He took five of Djokovic’s first six service games and broke seven times in all.

He faced only five break points himself, saving four.

More than two hours in, when Djokovic employed a backhand winner to get his initial break on his fifth opportunity, making it 3-all in the third set, he let out a couple of roars and waved his arms to ask for more noise from fans.

But less than a half-hour later, it would all be over.

Nadal was simply too good, as he almost always is at the French Open — and as good as any man ever in Grand Slam action.

Minutes after suddenly becoming a Grand Slam champion at age 19, while ranked just 54th, Iga Swiatek held a microphone during the French Open trophy presentation and was hesitant for pretty much the only time over the past two weeks.

“First of all, I’m not very good at speeches,” Swiatek began, haltingly, “so, sorry, because I won my last tournament like two years ago, and I really don’t know who to thank.”

When she’s got a racket in her hand, it’s a whole different story. With the poise of a veteran and the shots of a champion, Swiatek wrapped up a dominating run at Roland Garros, grabbing the last six games to beat Sofia Kenin 6-4, 6-1 in Saturday’s final.

Swiatek lost 28 games across seven matches and is the first woman to triumph in Paris without ceding a set since Justine Henin in 2007. She’s the first teen to win the women’s title there since Iva Majoli in 1997.