You are the owner of this article.
Edit Article Add New Article
You have permission to edit this article.
Edit
Login
I want to
Publications
News
Business
News Archives
Classifieds
Obituaries
Sports
Events
Featured Sections
Viewpoint
Announcements
Subscribe
E-Paper
Public Notices
Contact Us
Share This
1 of 6 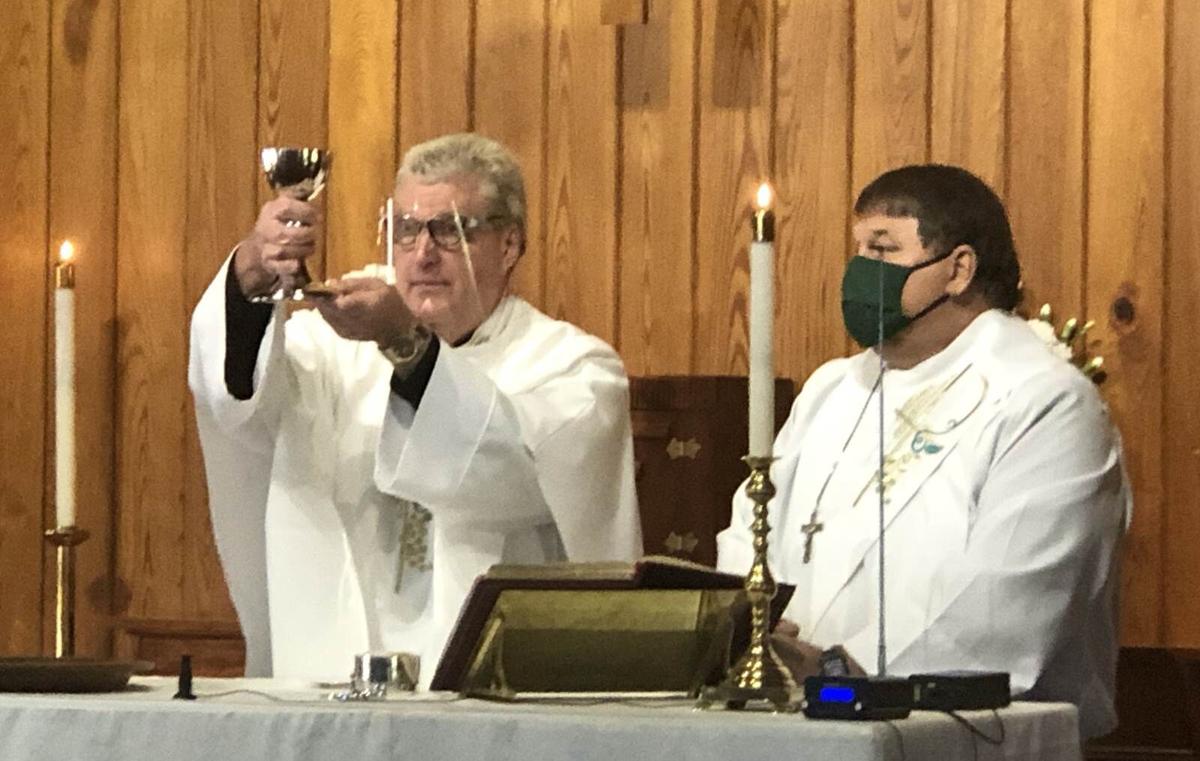 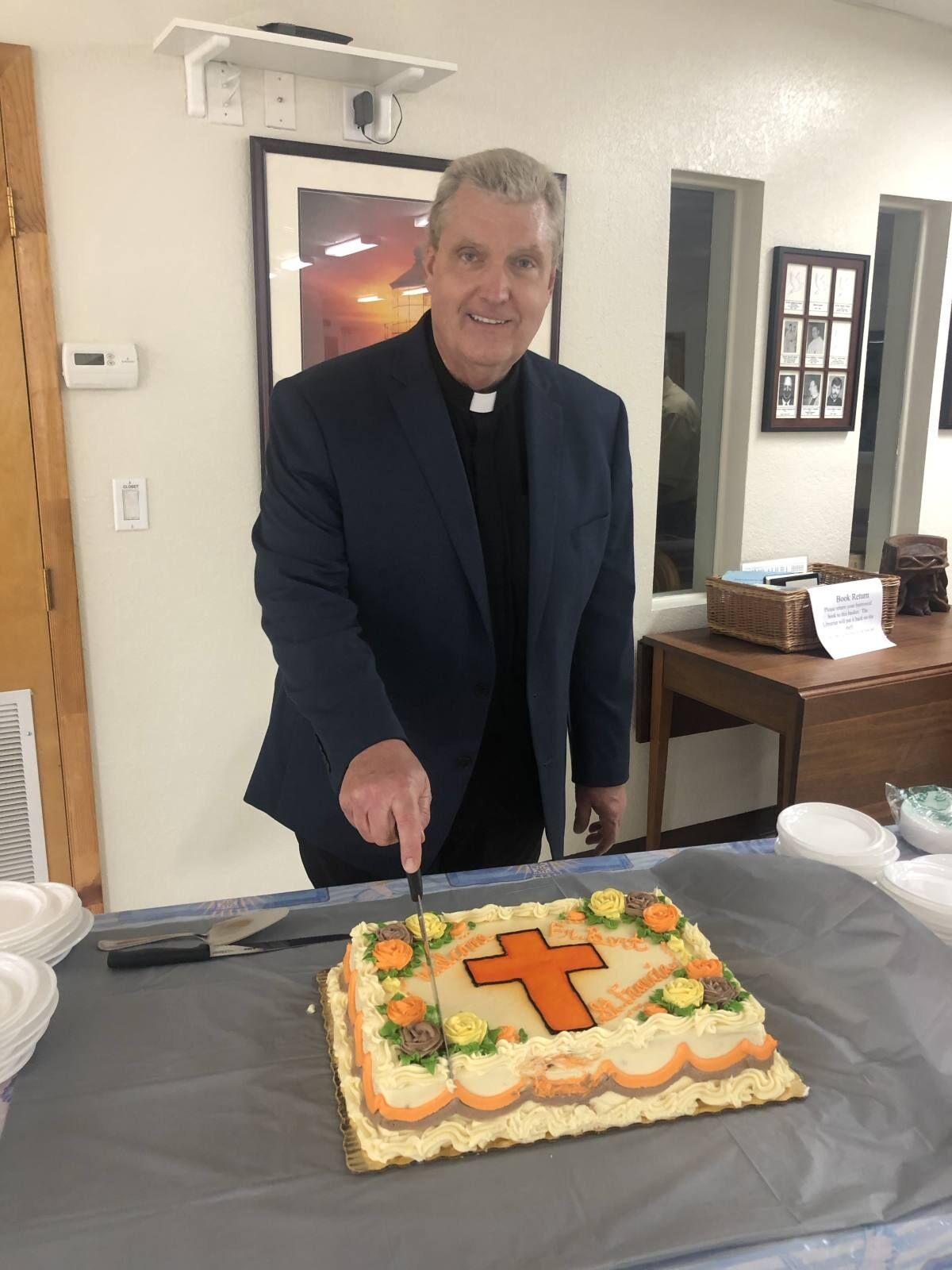 Father Bert Daly cuts his welcome cake at his meet and greet after last Sunday’s services. 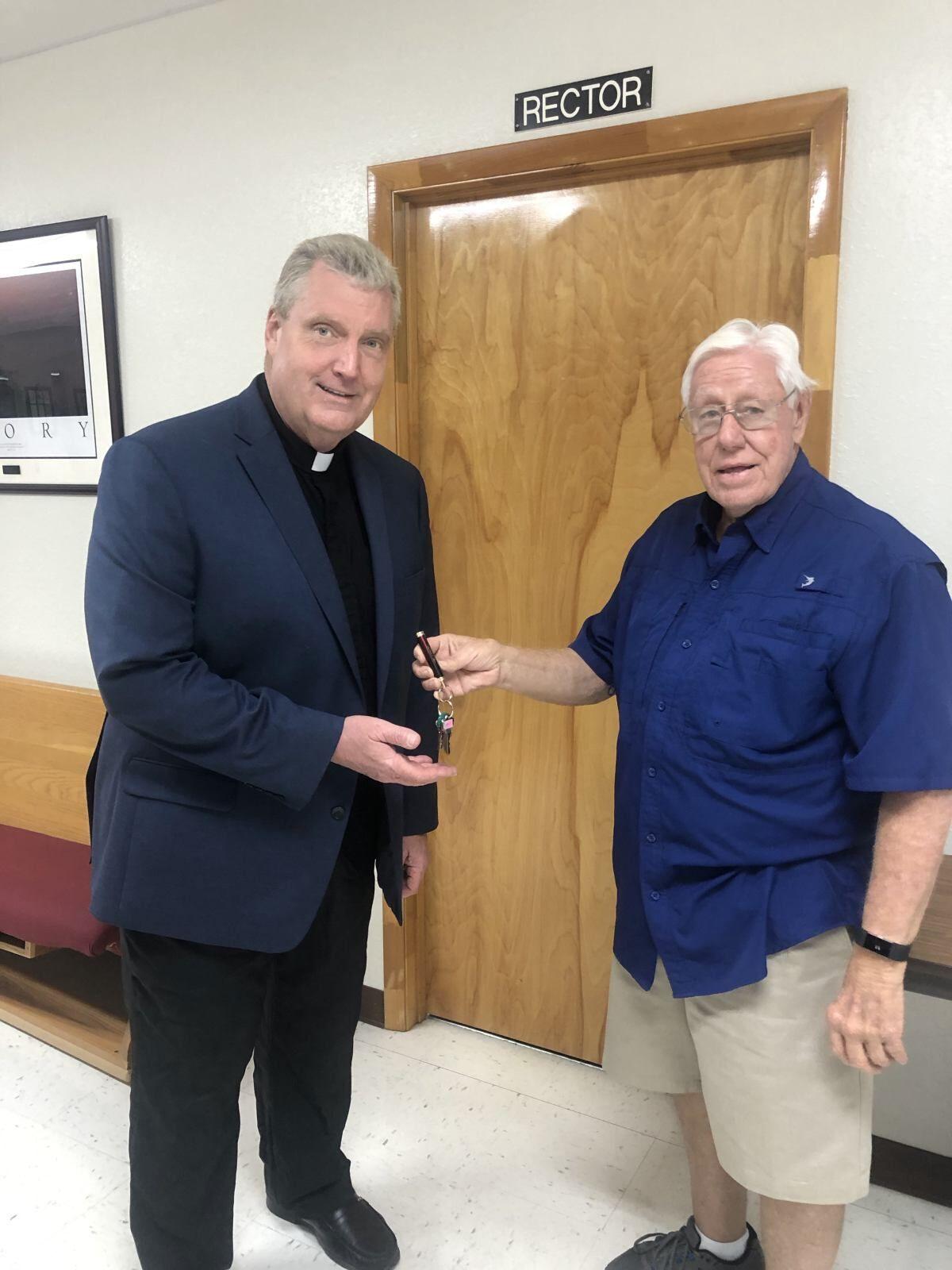 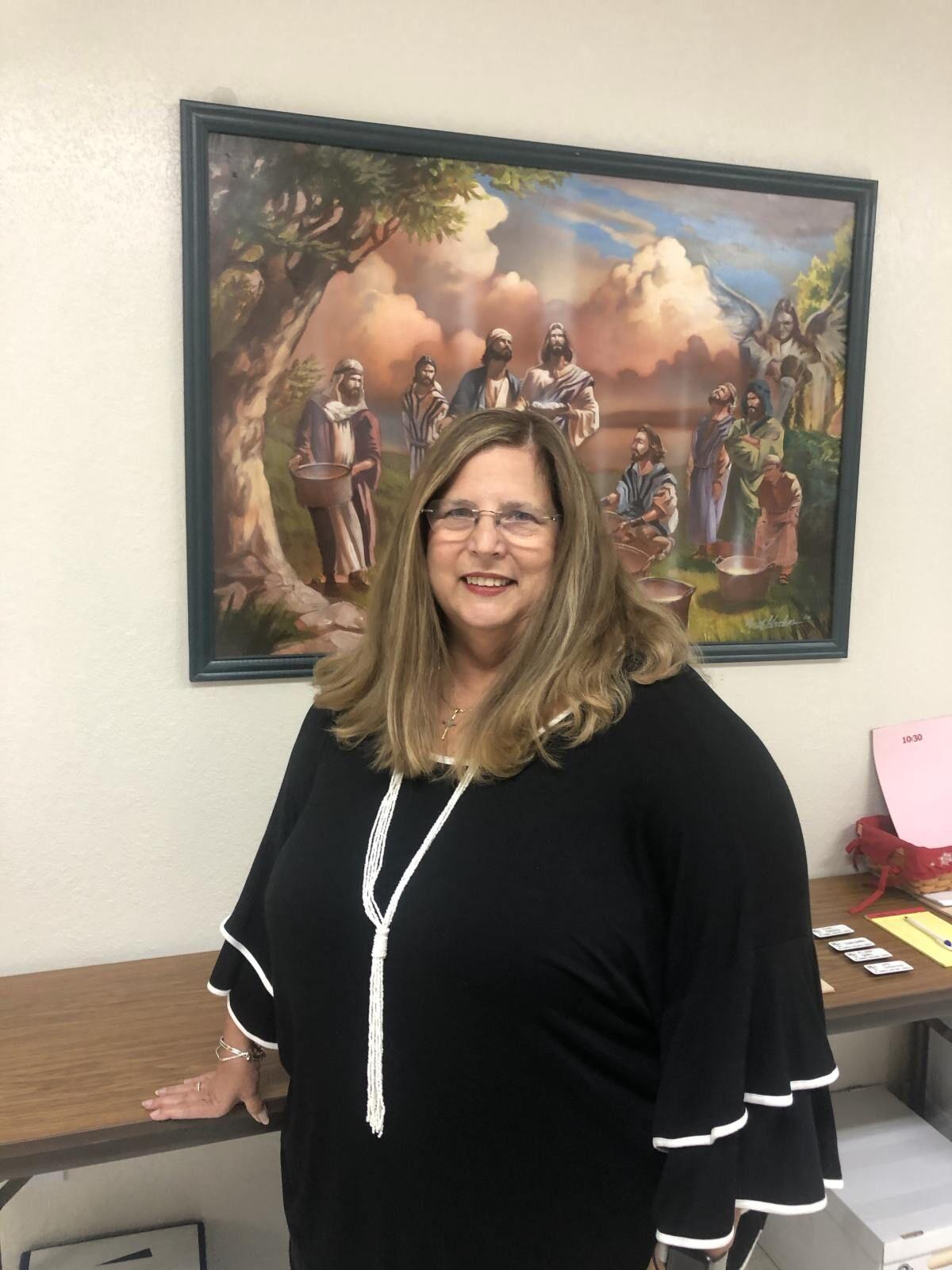 Laurie Glover headed the search committee to find a new rector for St. Francis Assisi Parish. “He found us!” 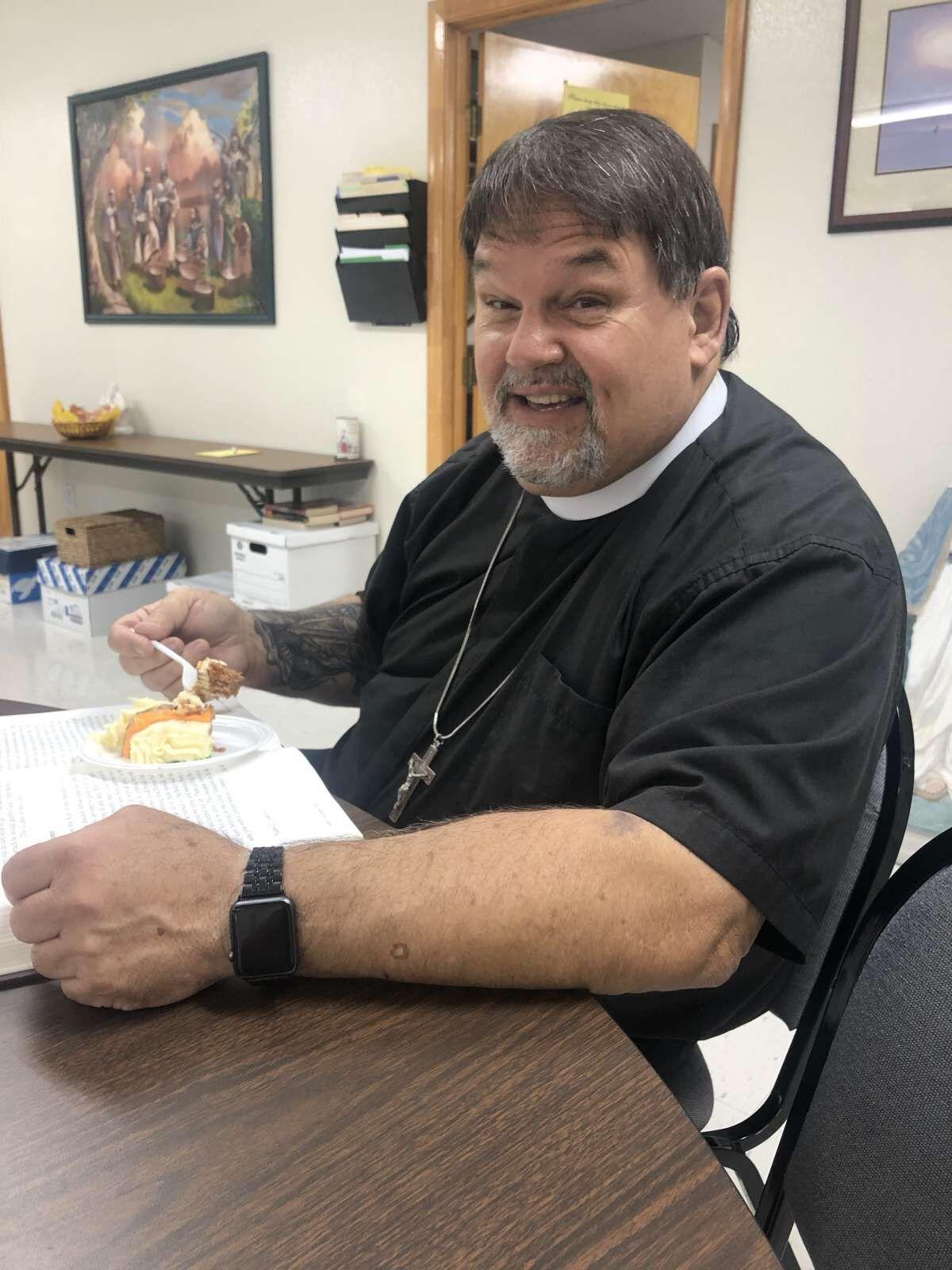 St. Francis Assisi Episcopal Church’s Deacon, Rev. Maurice McGee has known Father Bert for 10 years. “We are exited about having him as our new rector. He will be deeply involved not only in our parish but the community of Lake Placid.” 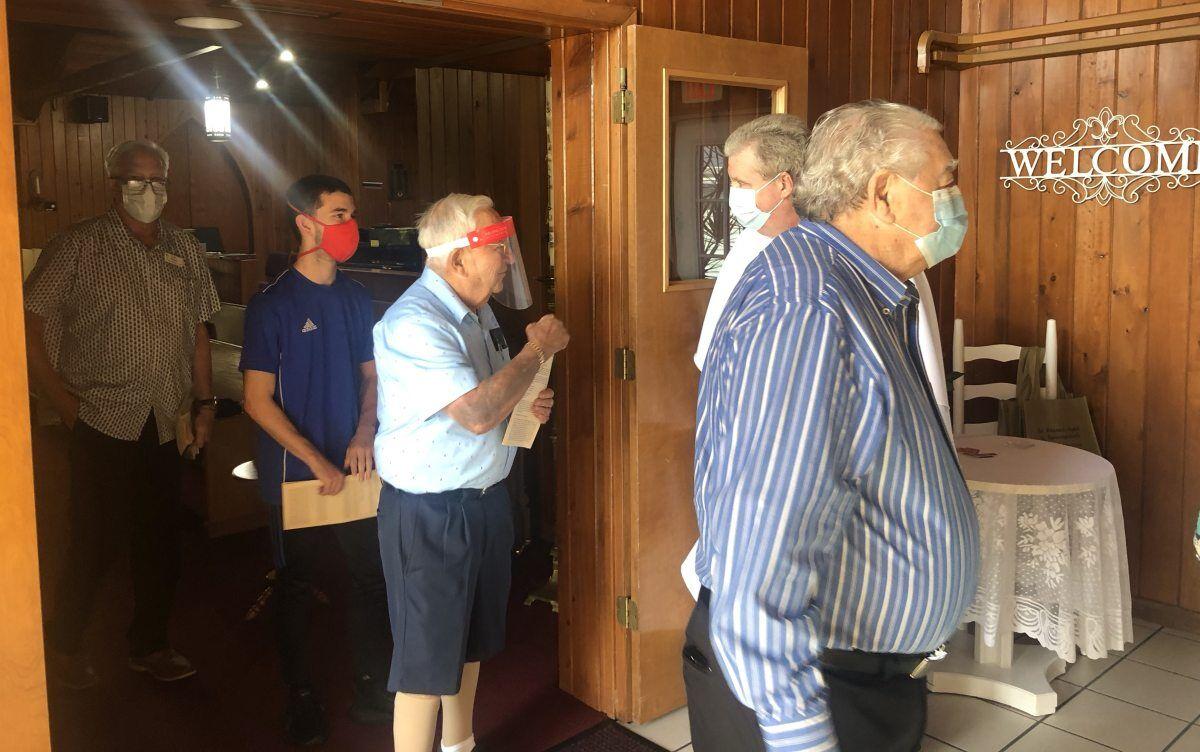 Father Daly greeted his new flock as they left his first liturgy Sunday.

Father Bert Daly cuts his welcome cake at his meet and greet after last Sunday’s services.

Laurie Glover headed the search committee to find a new rector for St. Francis Assisi Parish. “He found us!”

St. Francis Assisi Episcopal Church’s Deacon, Rev. Maurice McGee has known Father Bert for 10 years. “We are exited about having him as our new rector. He will be deeply involved not only in our parish but the community of Lake Placid.”

Father Daly greeted his new flock as they left his first liturgy Sunday.

Rev. Elizabeth Nelson had served as Rector of St. Francis Assisi Episcopal Church in Lake Placid for 21 years. The Episcopal Church mandates that a rector retire at age 72. Nelson retired last December and the diocese requires a period that the parish rector position remain open while a search is made for a new rector (pastor).

After a year long search Rev. Herbert “Bert” T. Daly Jr. has been named the new rector. He is the 12th priest to serve the church of 200 members. The church was founded in 1956 but received parish status in 1987. Daly held his first liturgy Sunday, Nov. 1 and greeted his new flock in the parish hall between services. He cut a welcome cake in his honor.

Father Bert as he likes to be called was pastor of. St. Mark’s Episcopal Church in Starke, Florida for the past three-and-a-half years. He was ordained in 2005 in Pennsylvania where he received his Master of Divinity degree. He held a number of positions in the Pittsburgh, Pennsylvania area. Prior to entering the seminary he had worked as a sales associate and sales manager in Arcadia and then in Pittsburgh.

Daly comes to Lake Placid with many ties to the area. His sister Jan is married to John Shoop the mayor of Sebring and Bert was born in neighboring Arcadia. While in Starke he was active in Rotary and is excited to become a member of the Lake Placid Noon Rotary Club.

Parish member, Laurie Glover who headed the search committee, said, “God wanted him to be here. He will be out and about in the community and take care of his flock.” Senior Warden Bob Dietrich commented, “Father Bert was exactly what we were looking for in a rector. He found us.”

Parish deacon Rev. Maurice McGee has known Father Bert for over 10 years. McGee said, ”He called me, inquiring about the opening. I felt he would be a wonderful rector and referred him to the search committee. I am so excited that he is here as he will be a wonderful rector. He also will be deeply involved in the Lake Placid community.”

Father Bert fits the parish survey needs that indicated members were looking for a rector that will be a strong leader, educator and teacher in the area of Christian education and come along with them, challenge them and continue to raise up lay individuals to lead continued and additional Christian Studies. The parish survey also found that the three highest qualifications they sought in a new rector were an excellent preacher, counselor and administrator. Glover and Dietrich and the search committee believe Father Daly has those talents and qualities.

Daly is proud of many of his past accomplishments. He increased Sunday school membership, started a family night and men’s club, supported the local food bank and the Wounded Warrior project, as well as opened his church to AA meetings. As an accomplished organist, he has a deep appreciation for moving liturgical music. He also served as the spiritual director of the popular Cursillo movement.

Some of his comments found on Facebook include “Jesus did not die and rise again so that we could keep our spiritual comfort level,” and “I encourage via my sermons to think outside the box as opposed to sermons that are outside the Bible.”

St. Francis Assisi Church is an older community of Christians. He plans to serve their continued needs but has interest in creating a small Sunday School program for youngsters that will grow. His motto is, “Let the Spirit lead us.”

Father’s hobbies and interests include swimming, reading historical fiction, mystery novels and play the organ. He is happy that the parish has a new Johannus three manual organ.

St. Francis Assisi Episcopal Church is located at 43 Lake June Road, Lake Placid. There are two services every Sunday, one at 8 a.m. the second at 10:30 a.m. Christians looking for a congregation that is open and welcoming with a new energetic priest are invited to come and celebrate the liturgy in Word and Sacrament to see if St. Francis will meet their spiritual needs.