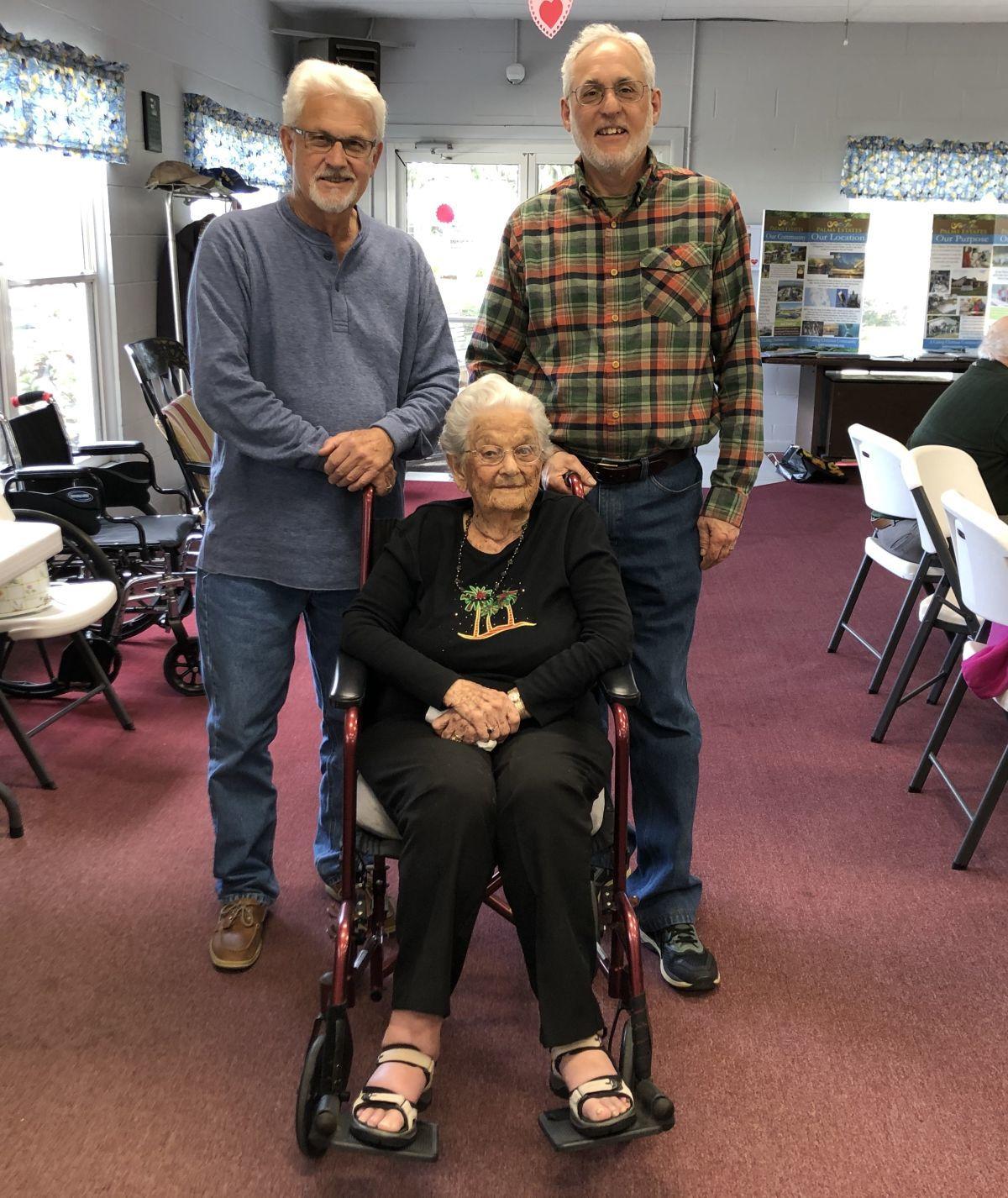 Gladys Malette with her sons Tim and Roger Malette. 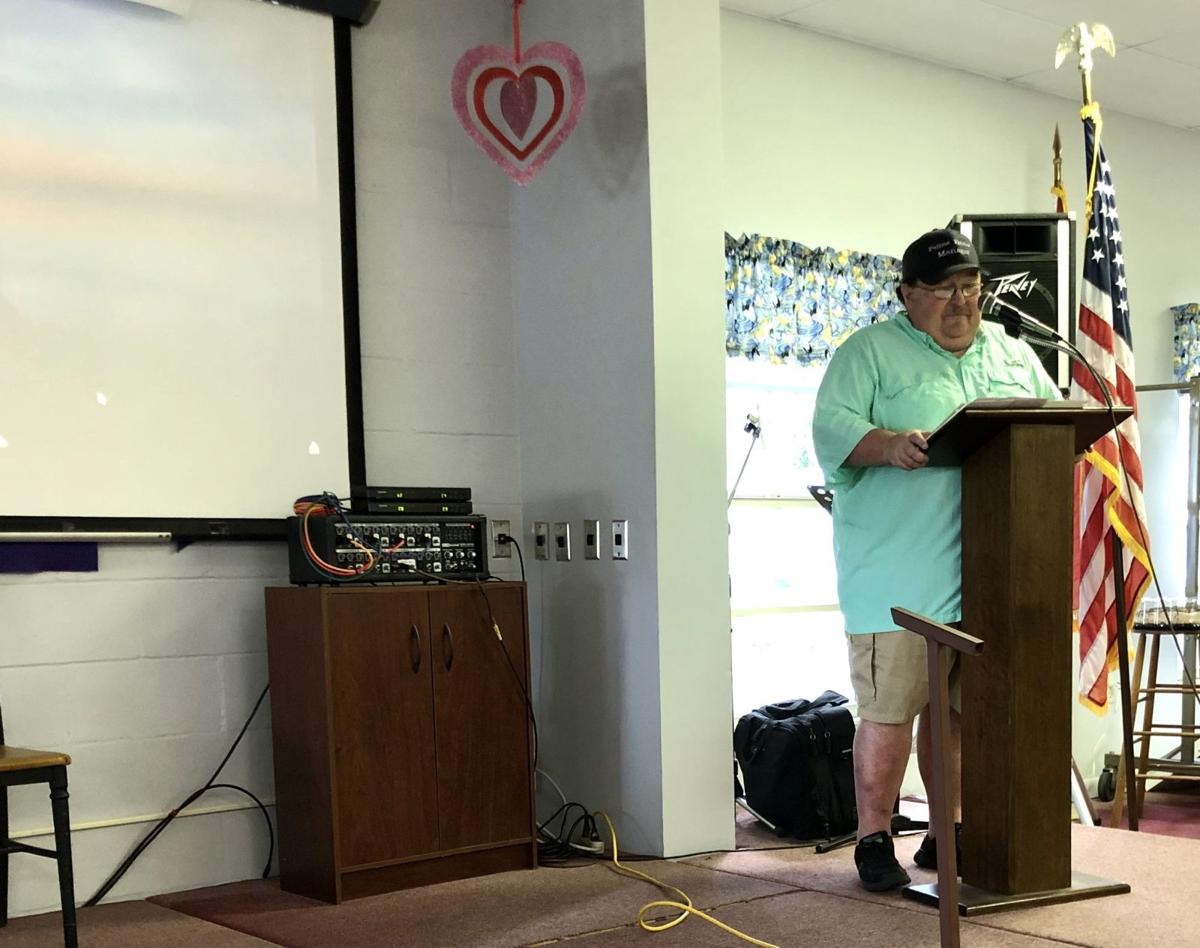 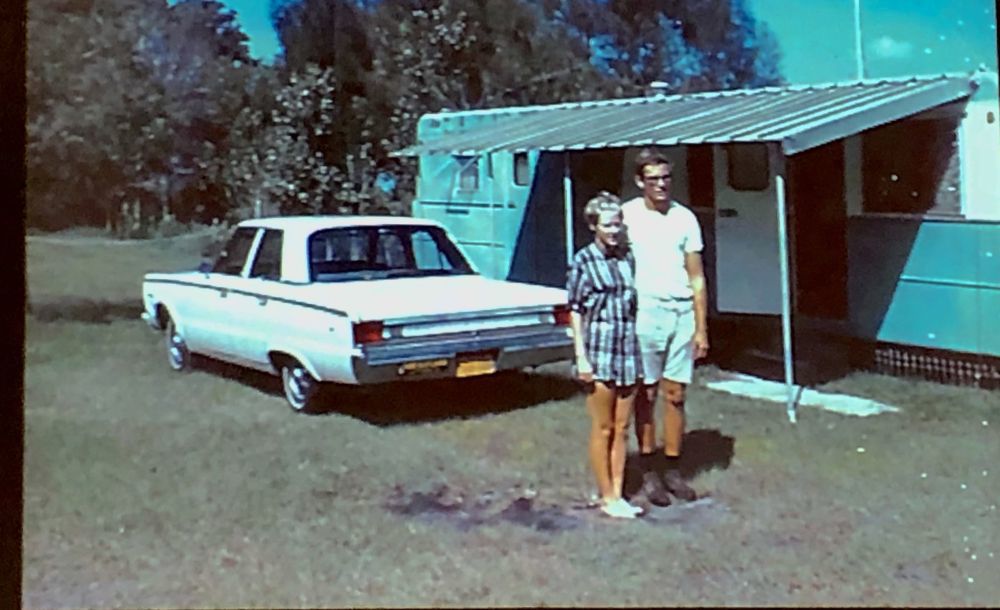 A picture of Don and Betsy Shope as a young couple. 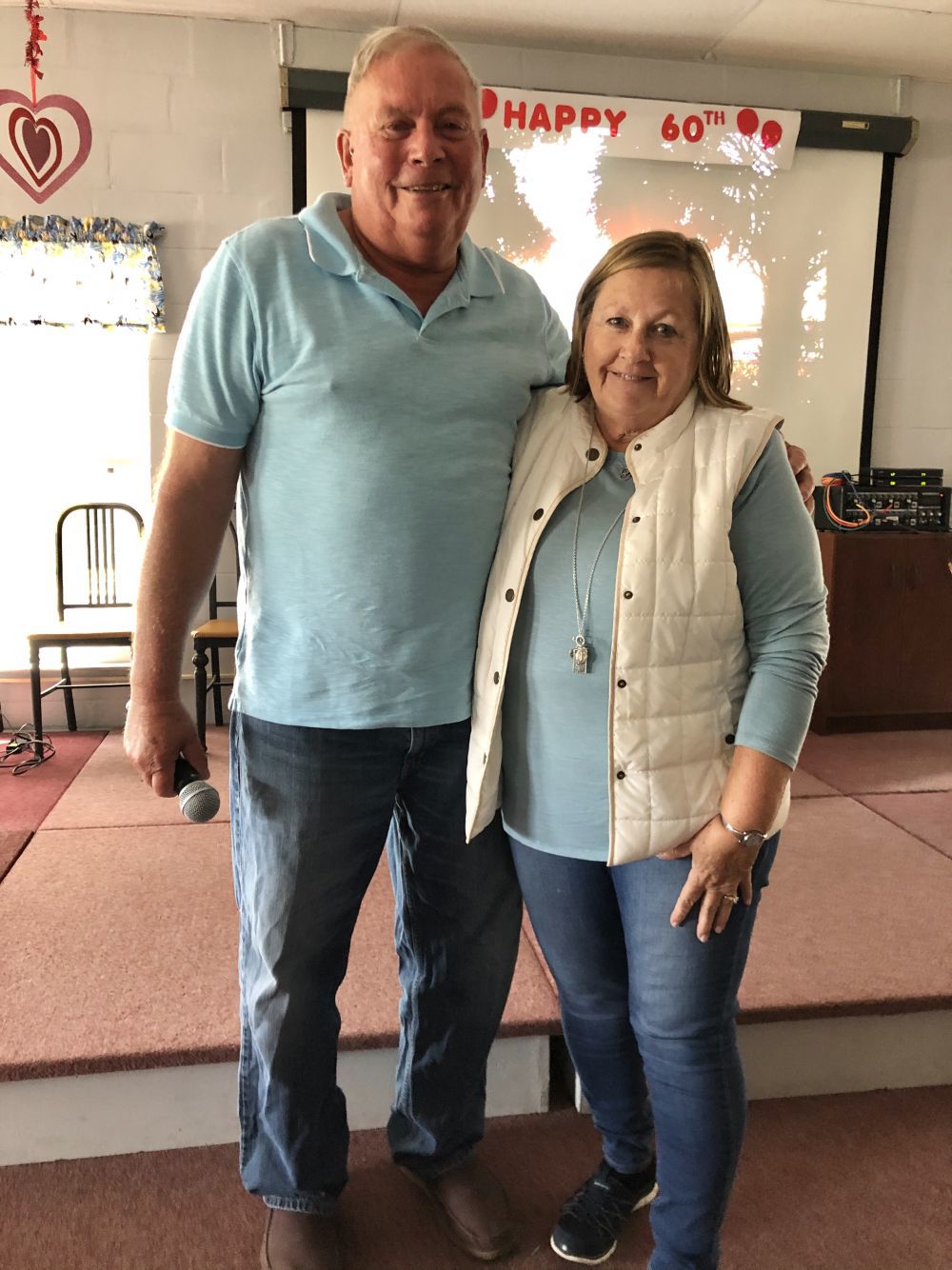 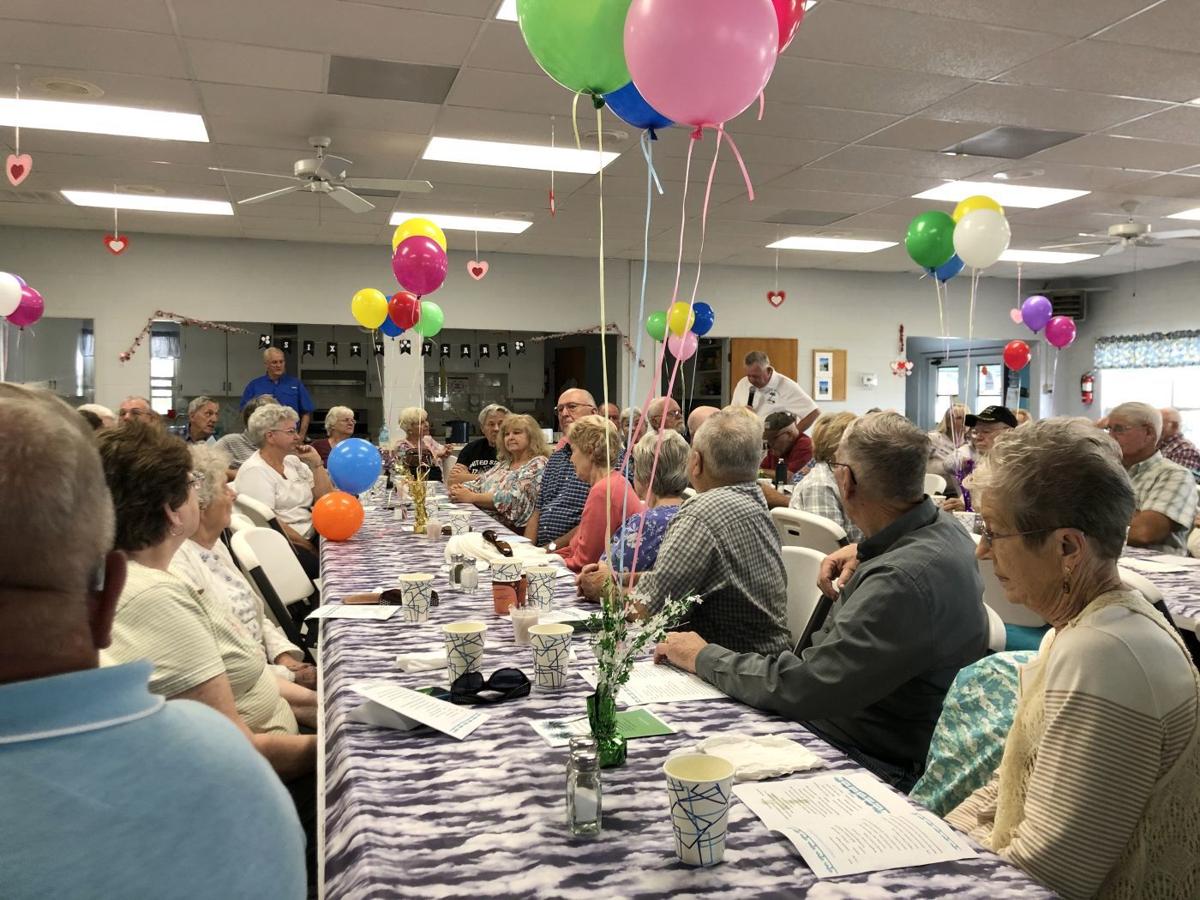 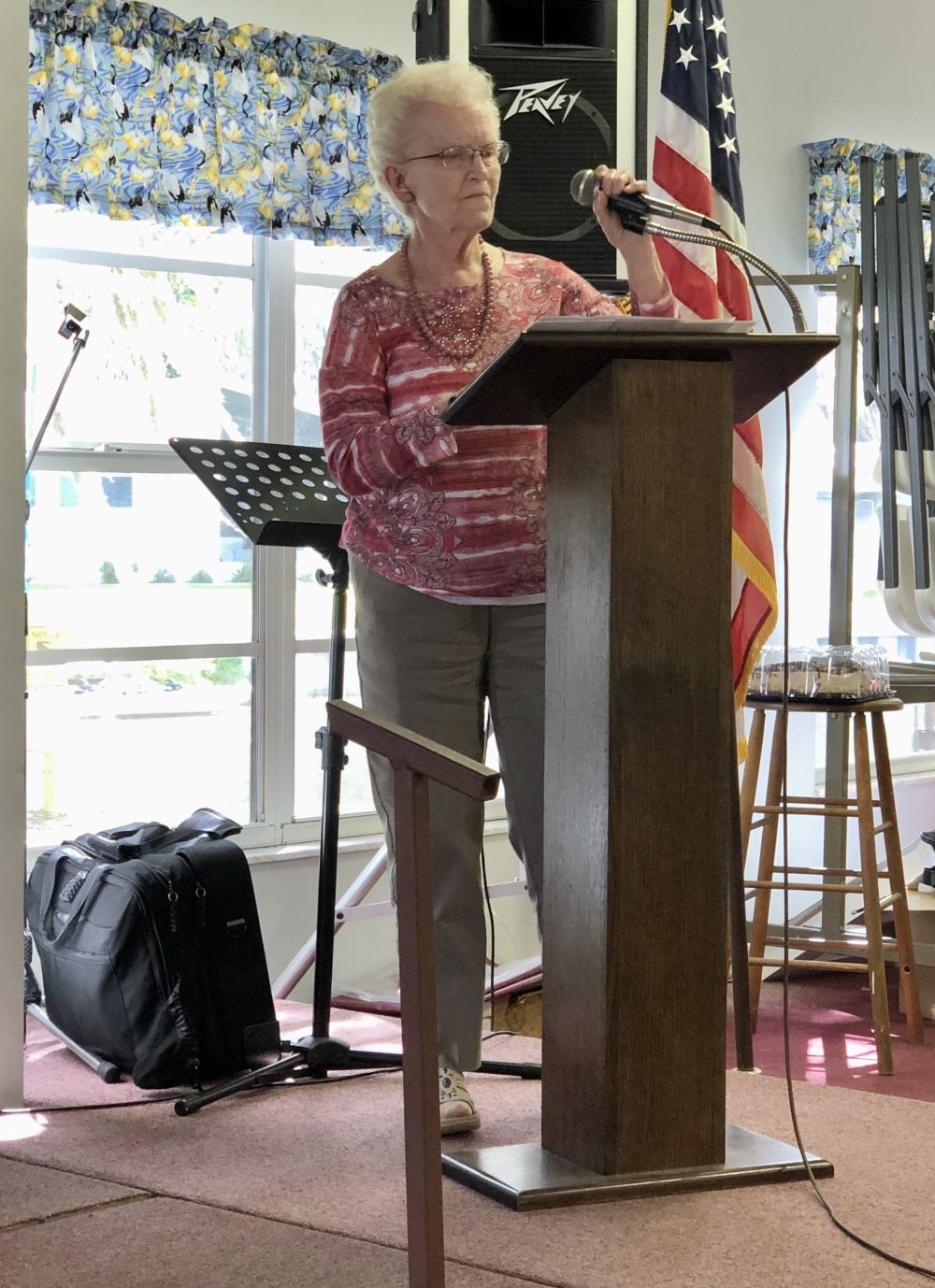 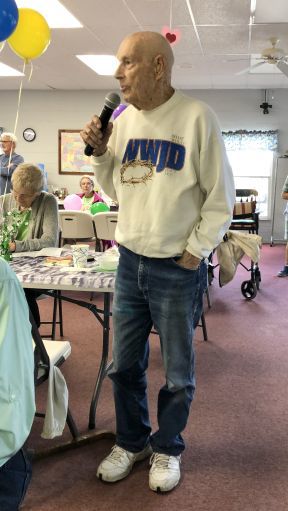 John King speaks into the microphone. 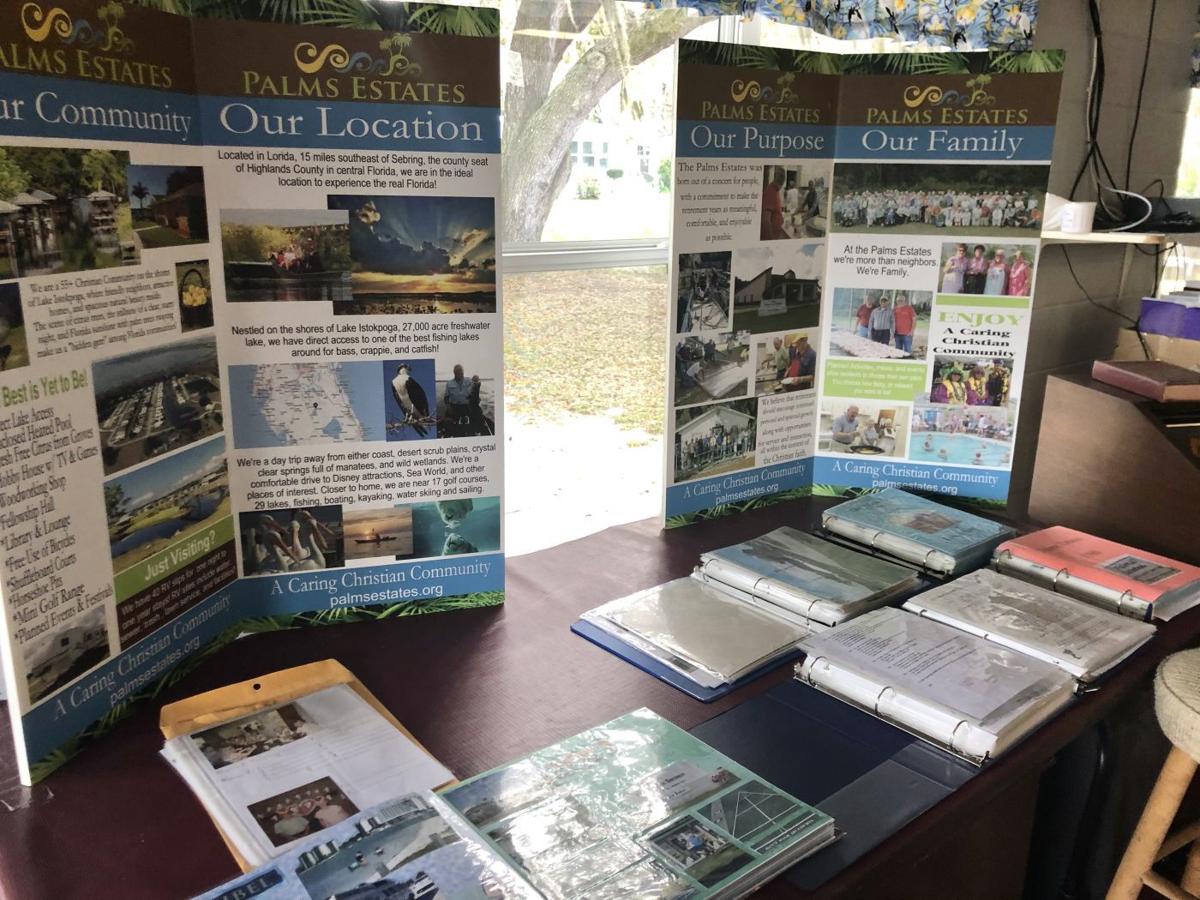 Picture of boards and scrapbooks about Palm Estates. 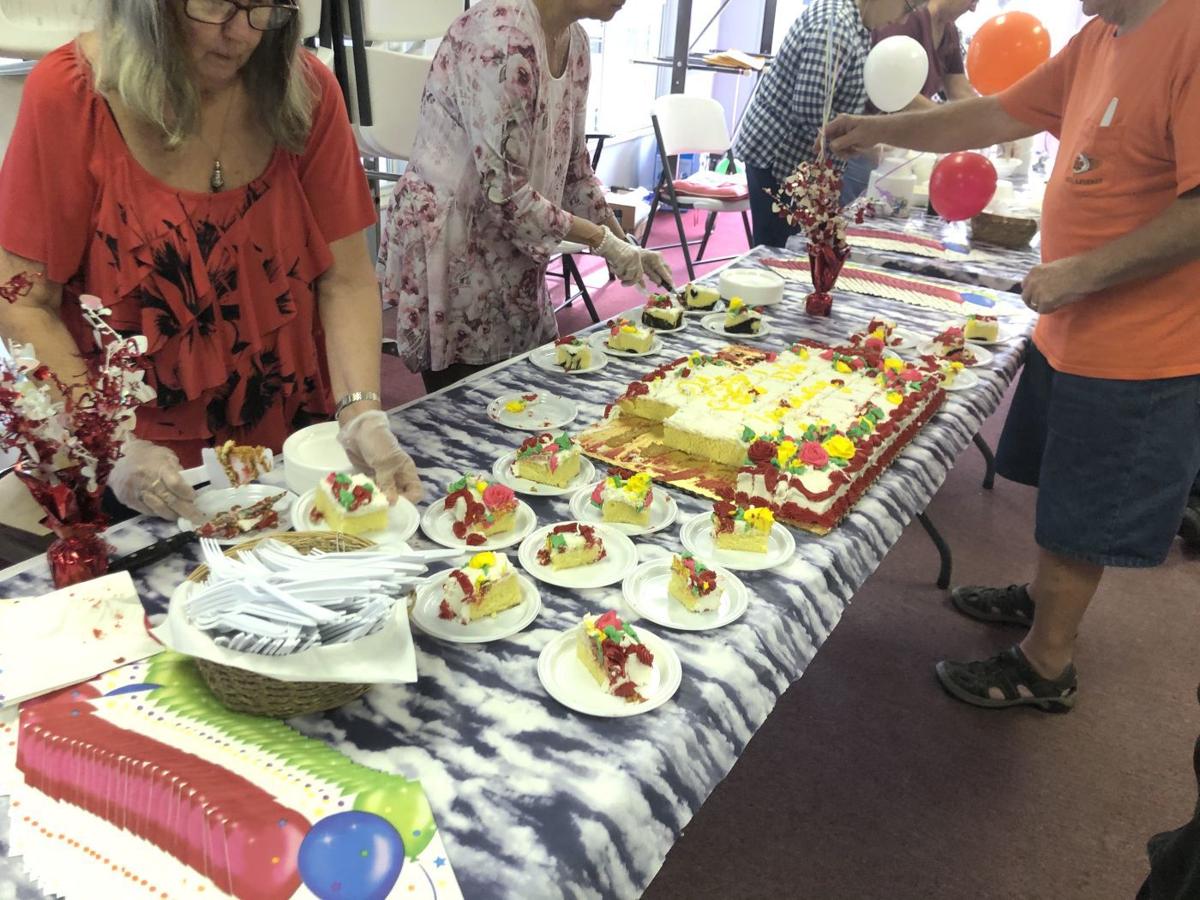 The 60th anniversary cake being served. 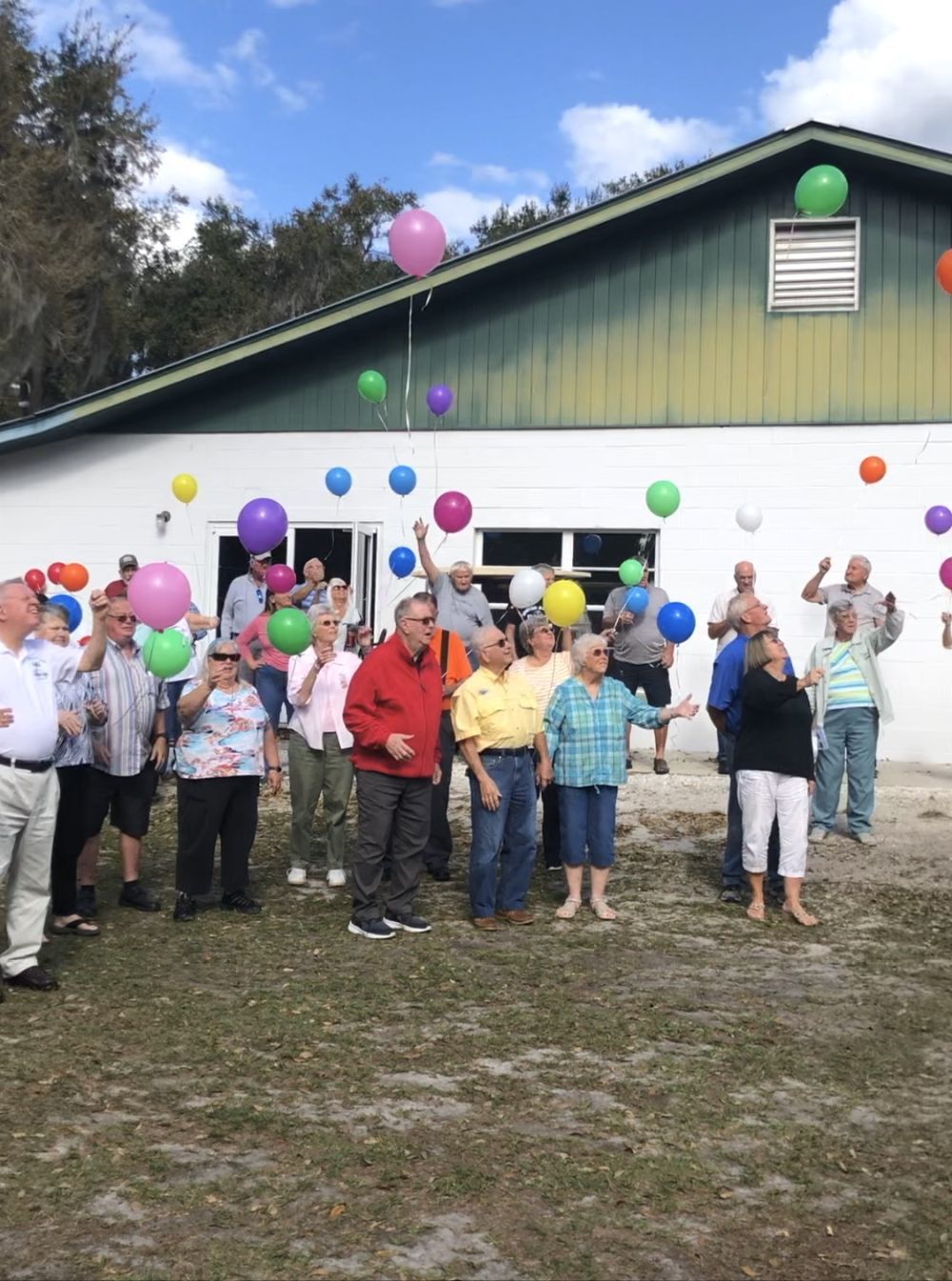 Everyone releasing their biodegradable balloons. 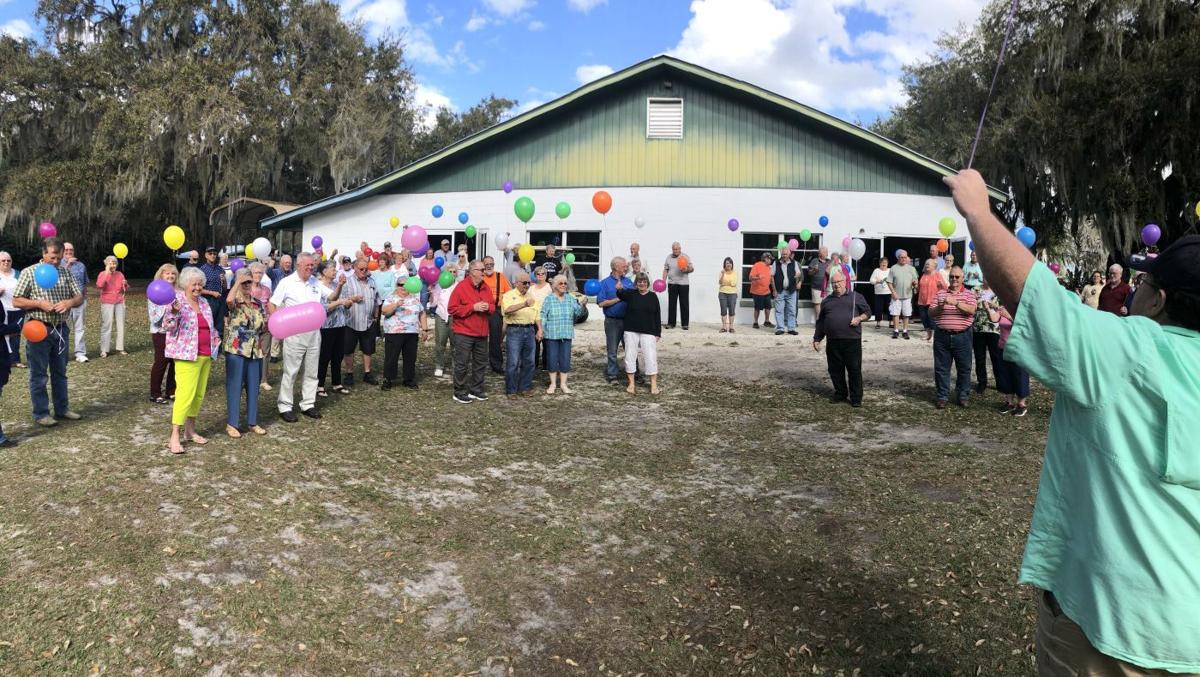 Residents outside ready to release their balloons.

Gladys Malette with her sons Tim and Roger Malette.

A picture of Don and Betsy Shope as a young couple.

John King speaks into the microphone.

Picture of boards and scrapbooks about Palm Estates.

The 60th anniversary cake being served.

Everyone releasing their biodegradable balloons.

Residents outside ready to release their balloons.

LORIDA — Located off Highway 98 and on the shores of Lake Istokpoga, the quiet yet charming Palm Estates of Highlands County celebrated their 60th anniversary on Saturday, Feb. 22. The history of the 55-plus retirement community and RV park goes back to The Church of the Brethren (now the Lorida Church of the Brethren). In May 1959 in a council meeting, the board and the study committee of the church decided to set aside some money and buy some land to have a place for retired ministers and their wives to come and live during the winter.

Jeff Parsons, manager of the establishment stated, “And 60 years later, we have 75 homes and 40 RV sites and a community of about, when everyone’s here, of 220 people”.

There are 35 year-round residents at Palm Estates, no one from the original start are left, but instead a second generation of son and daughter retirees have taken residence, some in their past relatives’ homes. Parsons, whose parents live in the community, came down from North Carolina and started in the maintenance department, when an opening presented itself for management he jumped on it and has been happily managing the grounds for two years.

“Today is our 60, we’re celebrating our 60th anniversary and we are just very excited about 60 years. We’re one of the very few parks in Highlands County that has the same ownership that started 60 years ago. We’ve never been sold and never been bought. And we have prayed to stay that way forever,” stated Parsons.

The park does market themselves as a Christian community.

“And these people take care of each other. It’s just remarkable to see how if someone gets hurt or if someone loses a loved one how they rise up and send cards, feed meals, they’re just remarkable,” Parsons said.

The celebration was held from noon to 3:00 p.m. and had a luncheon to start the event which featured an array of foods such as soups and delicious chicken salad sandwiches.

After lunch, everyone turned to the stage to where Agatha Johnson before opening prayer, jokingly said, “It’s usually the custom of many of us here at Palms to take a nap after lunch. This is a long invocation, please bow your heads but don’t go to sleep.”

To begin, they played a very informative video of the park’s history and all the different people involved during its making by Gene Knicely. Followed by Don and Betsy Shope, who came down from Pennsylvania for the event and resided at Palm Estates 50 years ago, from March 1969 to January 1971. The couple were part of the BSV (Brethren Service Volunteer) and went in-depth of how they got involved in the park and talked about the rich history of Palm Estates and its delightful residents all through pictures they’ve taken throughout the time of their volunteer.

Don Shope also mentions a mystery bell set that has been on the property for many years, but no one currently knows where it came from. The Shopes also tell everyone that upon only receiving $15 to $20 a month during those times, they would purchase five-pounds of hamburger meat from the grocery store for the convenient price of $1.

There was also a story about the day resident Junior King, 95, got into quite the pickle with a tractor he drove into a canal one of the days they were working on the orange groves that still stand in Palm Estates. King, a snowbird from Michigan came to the park in 1978 to retire, he helped build the fellowship center, where plenty of activities and programs take place. King also was involved in starting the Habitat for Humanity in Highlands County.

Resident Sylvia Replogle-Keister shared a beautiful poem about Palm Estates, where she expresses how they live on a lake and that the fishermen share their catches with the other community members and when the northerners go home, they all make sure to keep touch.

Before the program ended, the residents who are in their 90s shared fond memories. A few talked about their relatives that were before them and the stories of what brought them to the retirement park. A couple residents mentioned how some of their children were baptized in the canals.

Gladys Malette, 98, who has been apart of the community since the late 80s, bought a home on Canal Street in 1993, she said, “I love the attitude that people have here. It seems to be a Christian attitude. Everything that’s done is done is love”.

One of her first memories were of paying $1 to swim in the Palm Estates swimming pool after it was built. Malette has two sons, Tim and Roger Malette (also involved in the community) nine grandchildren and 16 great grandchildren. After everyone shared precious memories and had a few laughs, one more thing was planned and that was to go outside and release balloons.

“We’ve bought ecologically safe and biodegradable balloons, so it won’t hurt the wonderful wildlife here and we want to release the balloons in honor of those who came before us and in hope of the future that’s ahead of us”, Parsons said.

As the attendees took their balloons and gathered outside Parsons commemorated the past and future generations and in unison everyone released the balloons that speckled the crisp blue sky in beautiful colors. As they floated away all cheered, then went inside to enjoy scrumptious cake and ice cream as they continued to reminisce in the past and spoke of what the future holds.