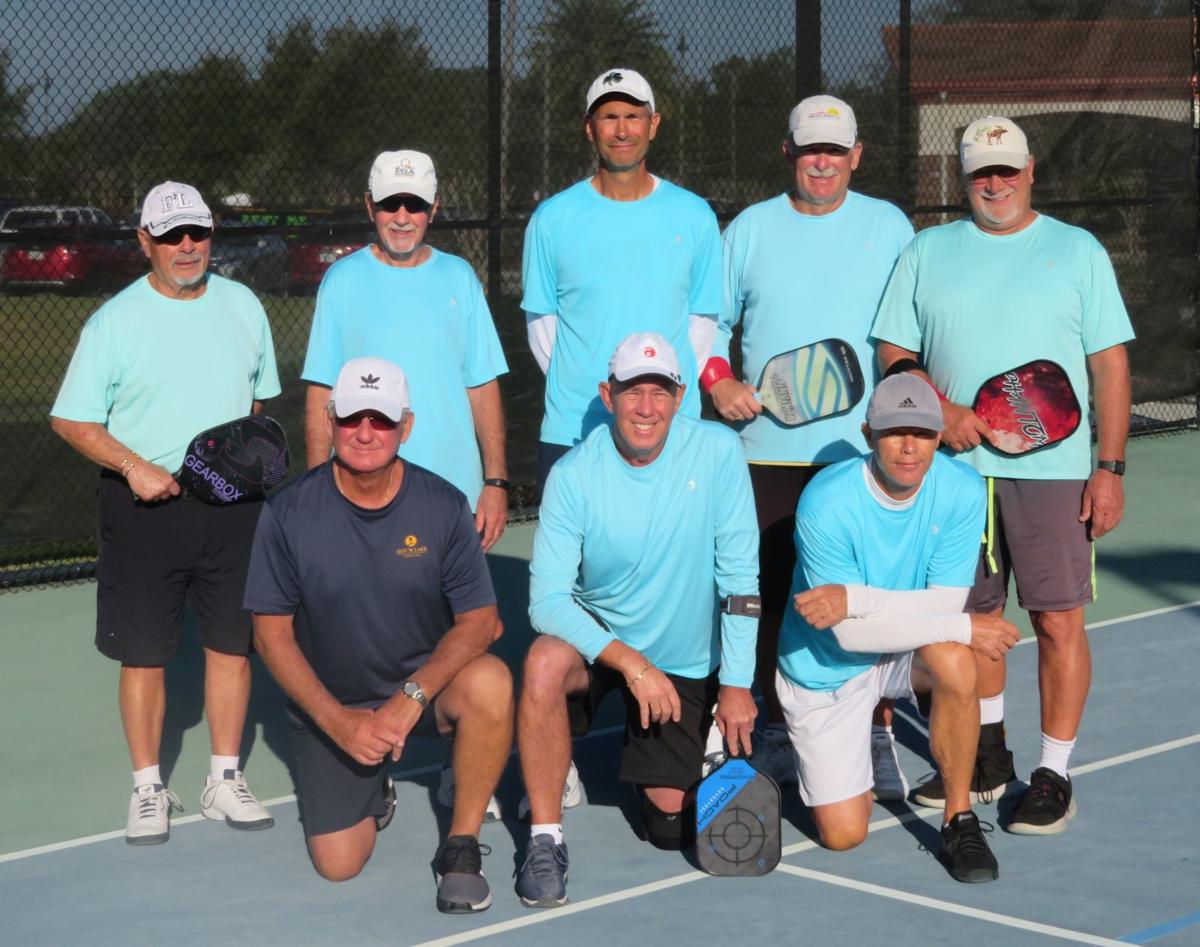 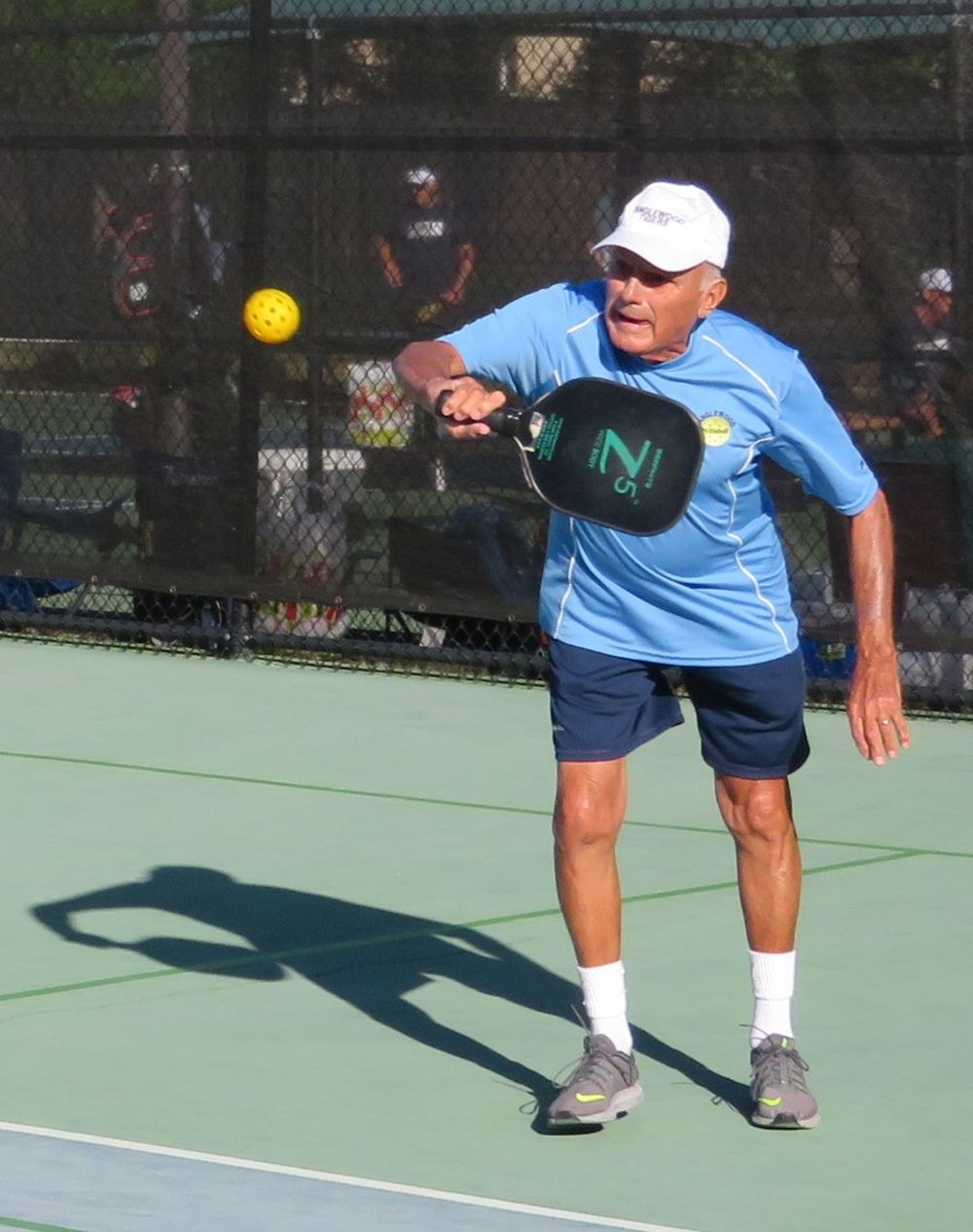 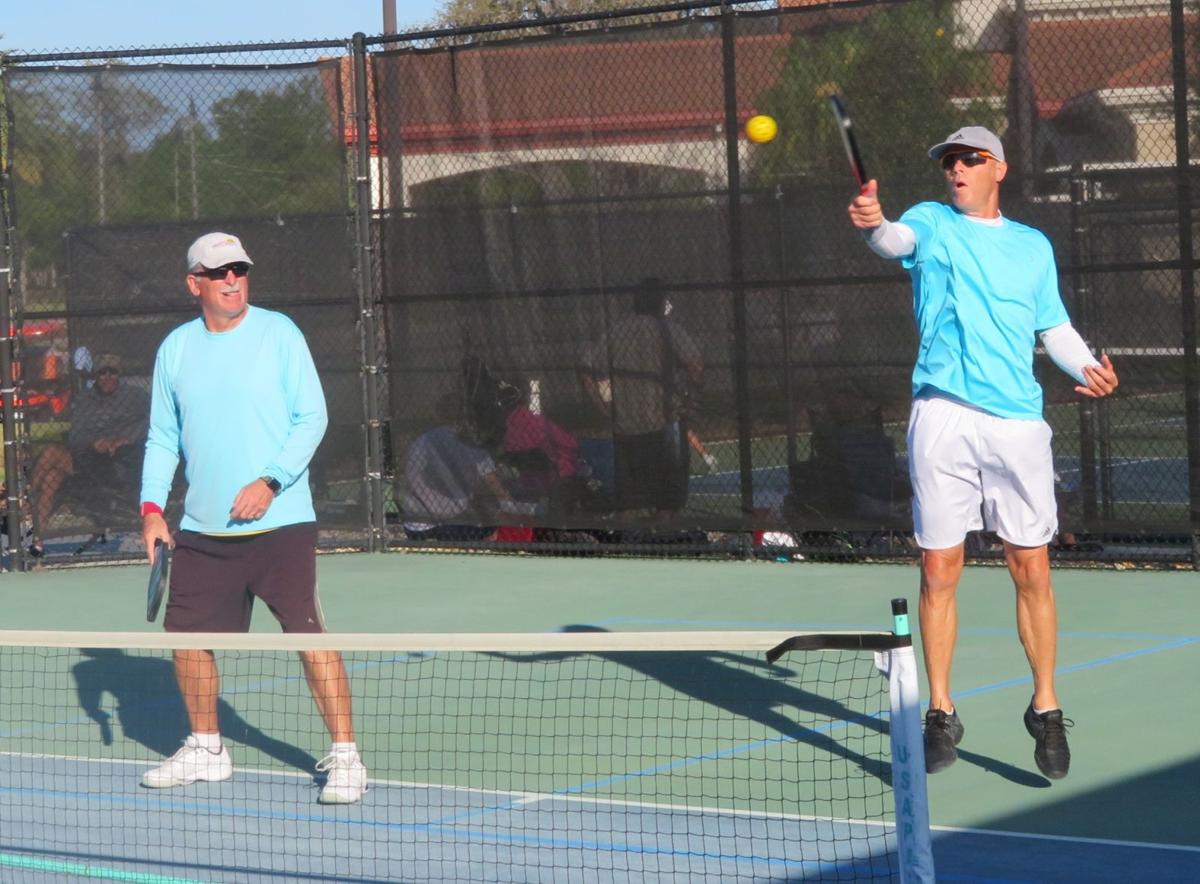 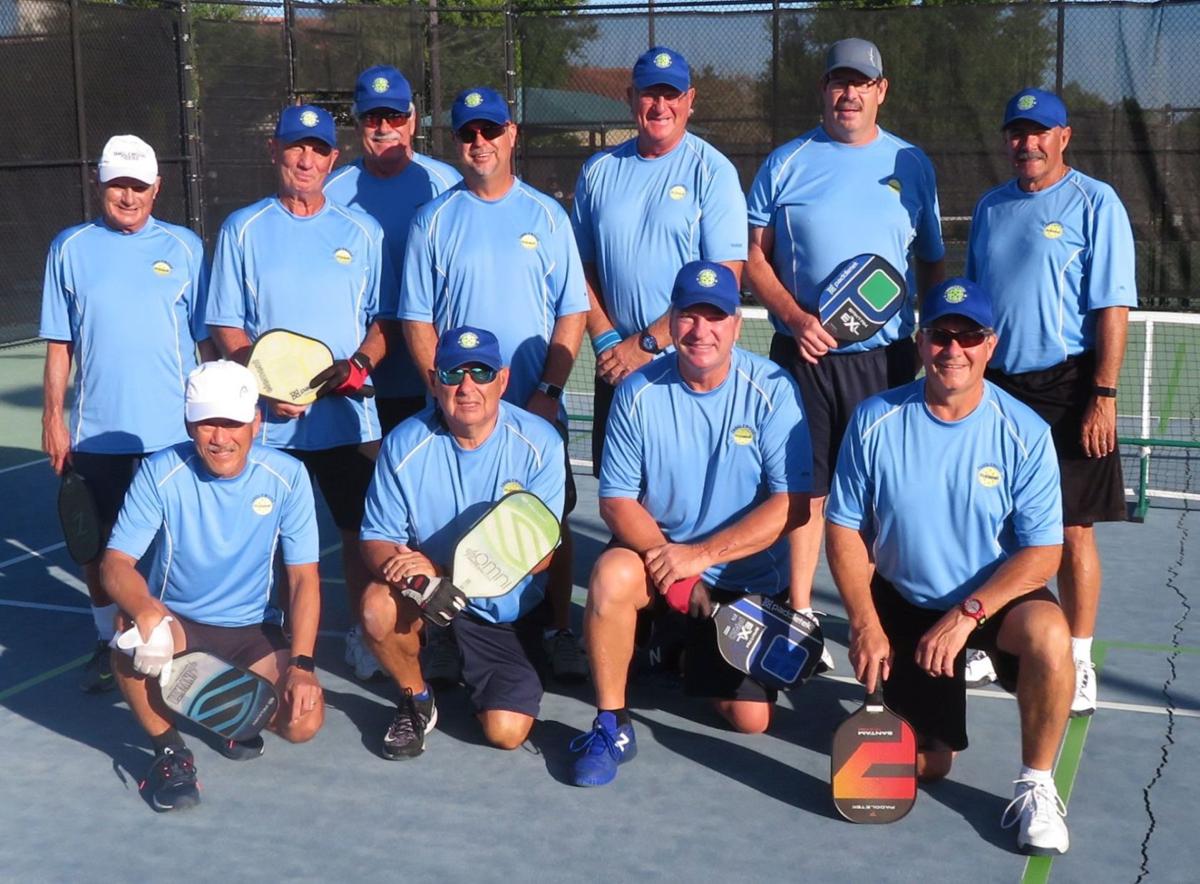 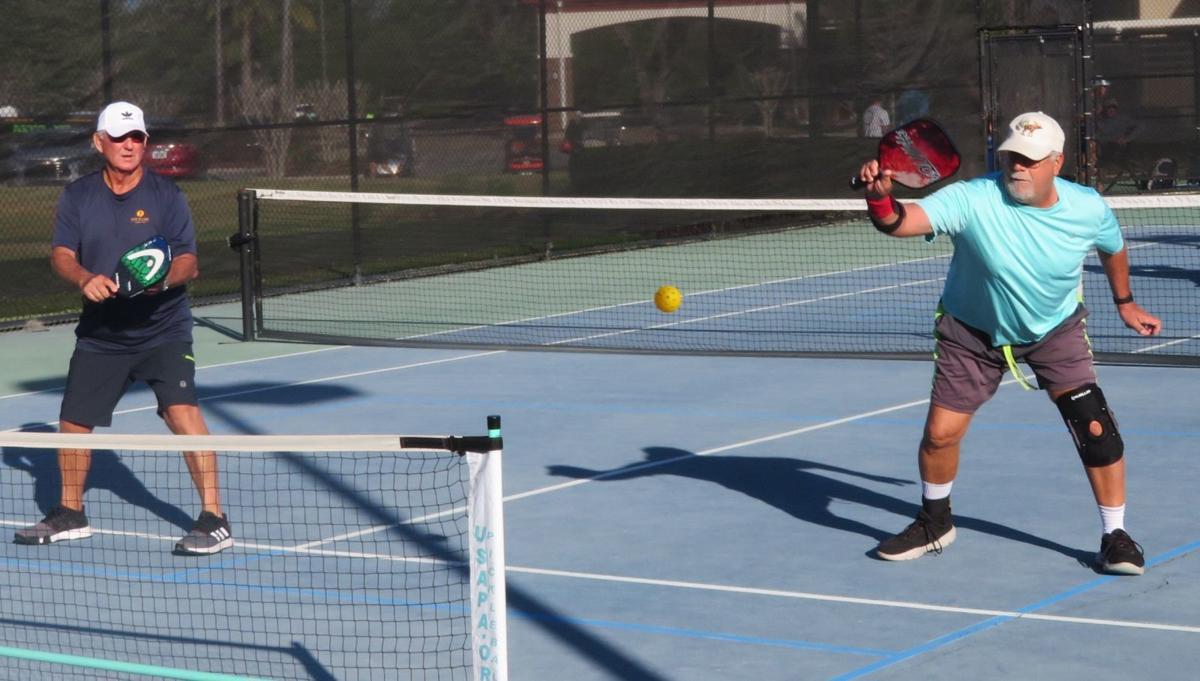 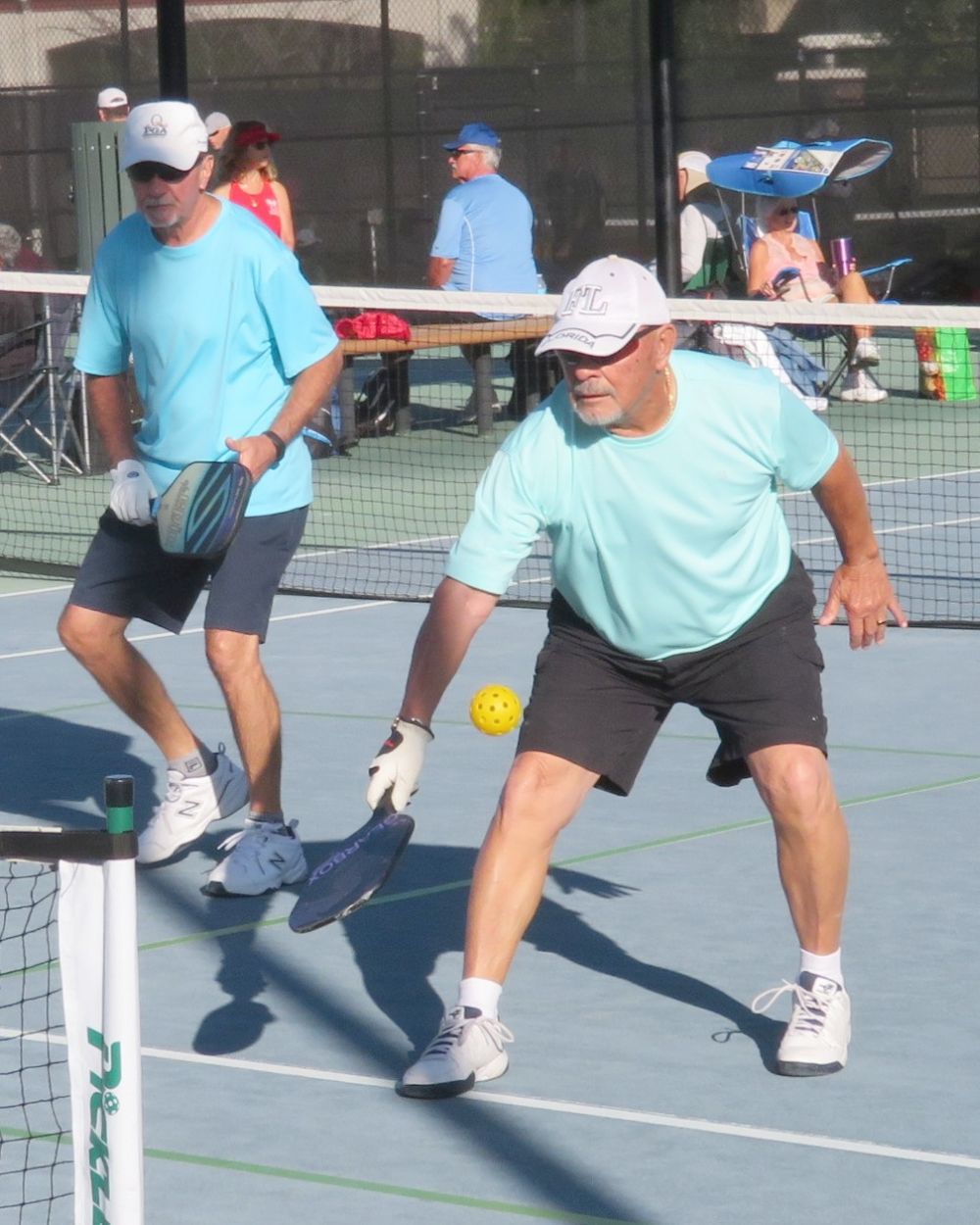 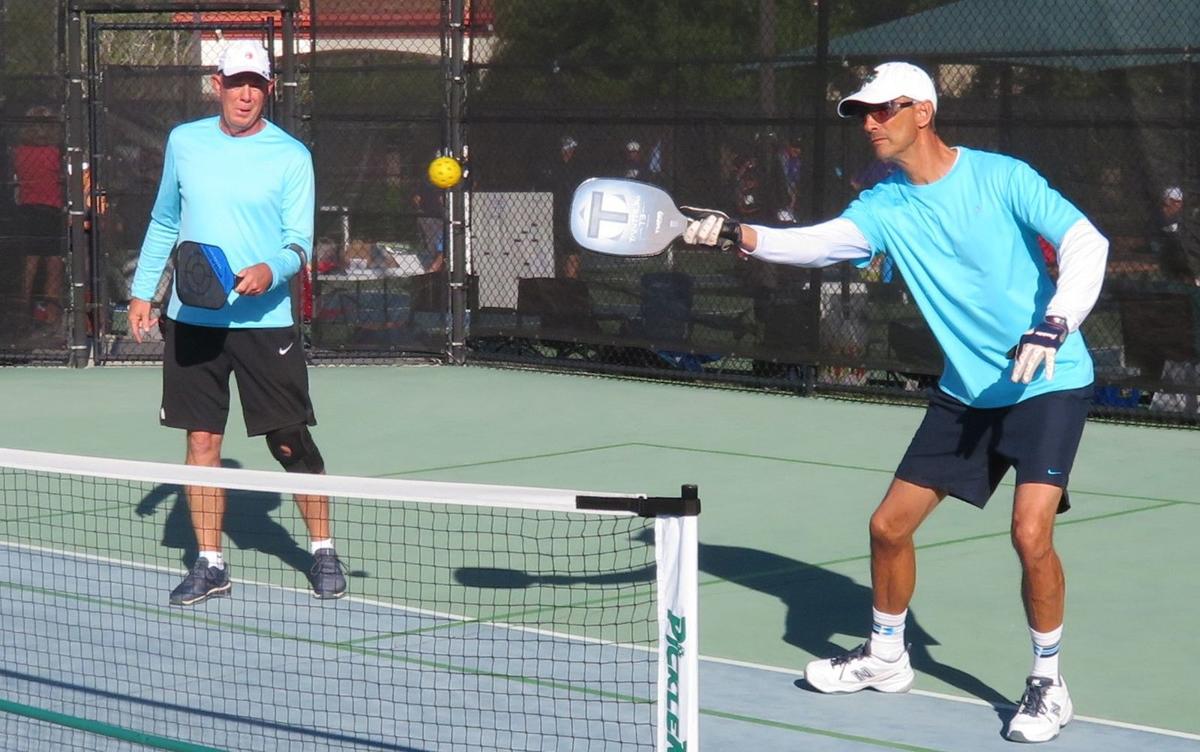 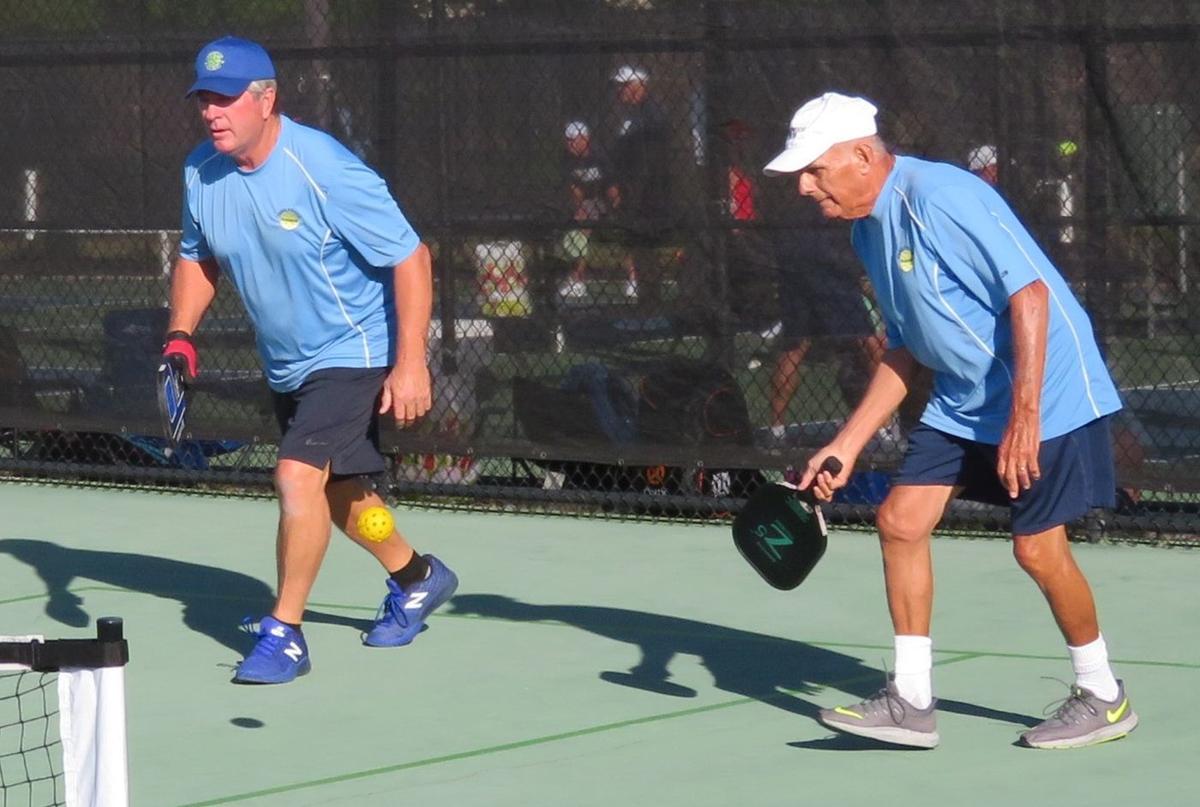 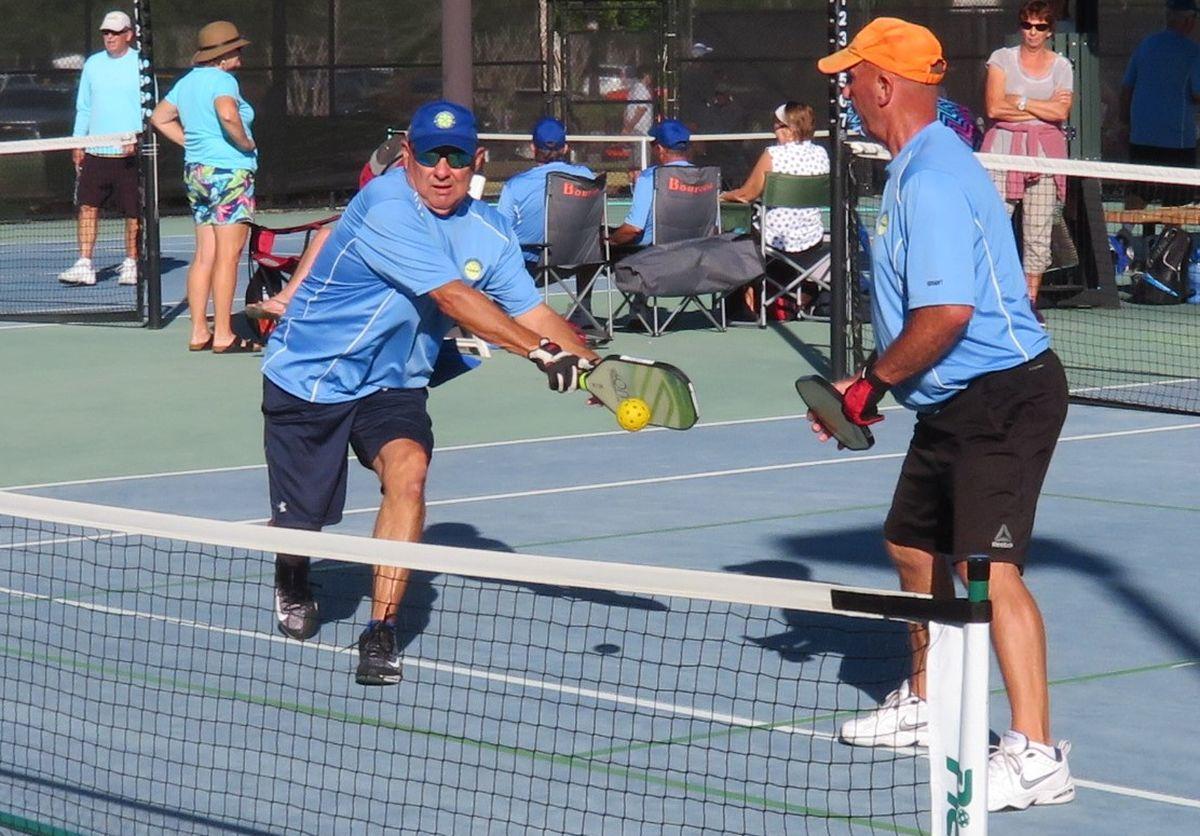 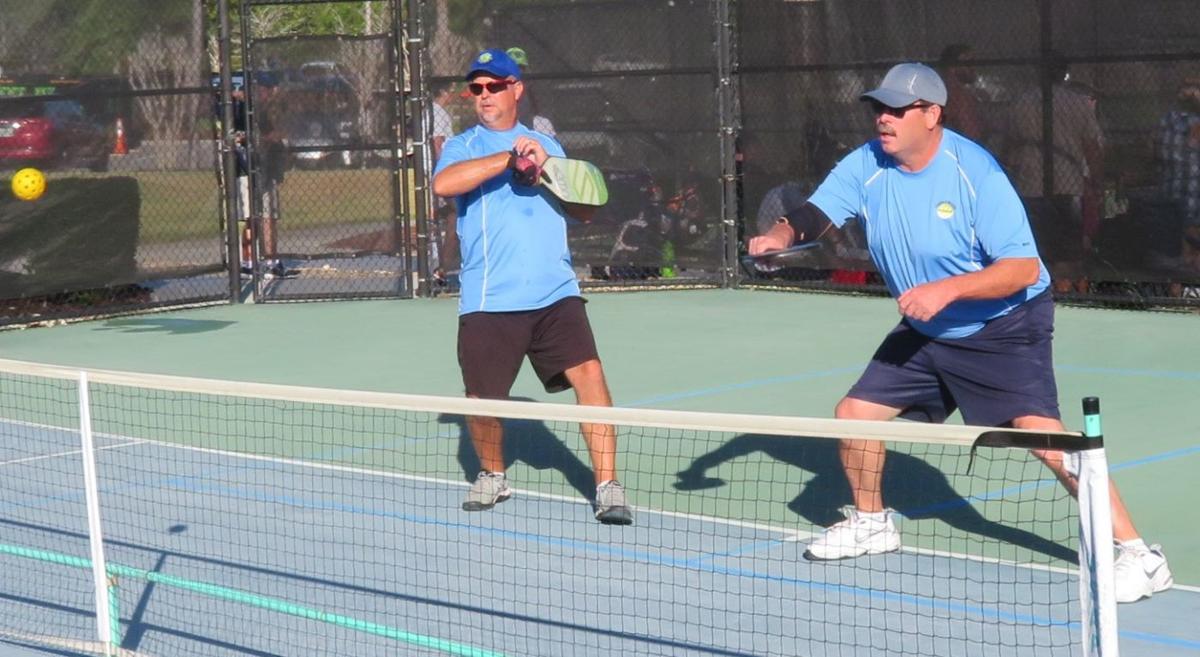 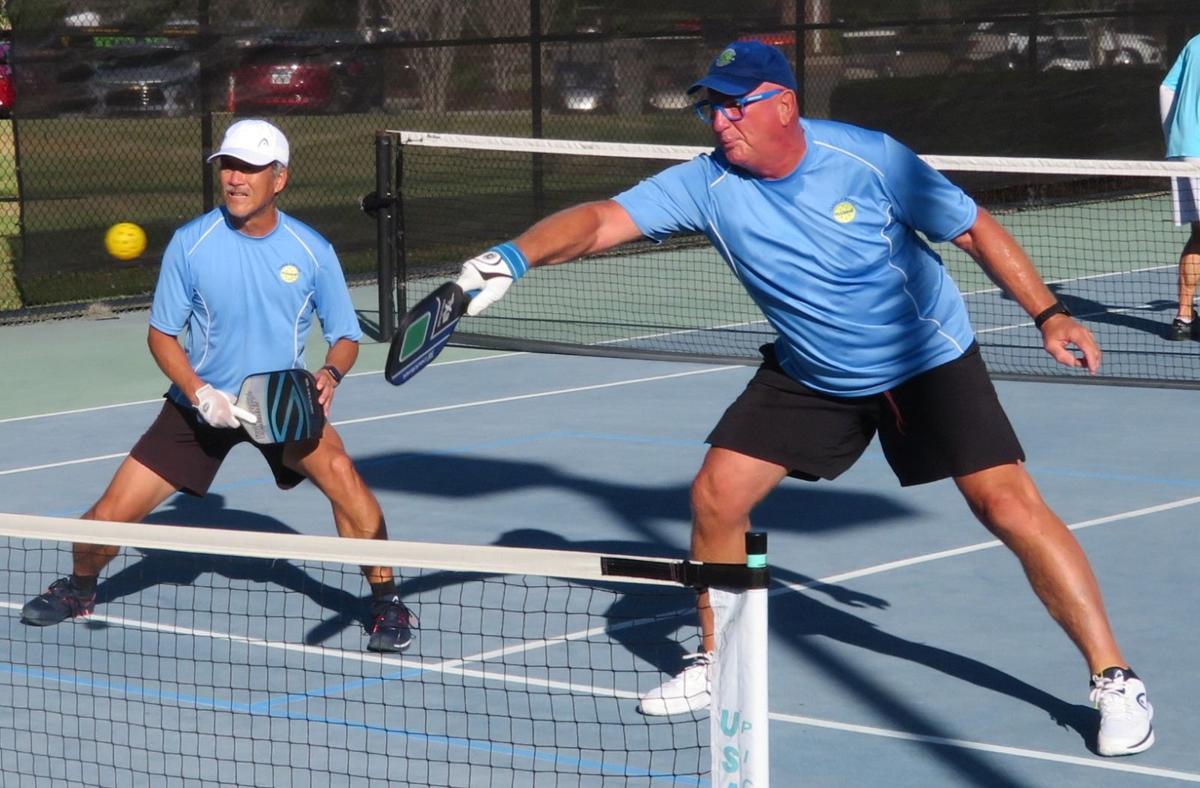 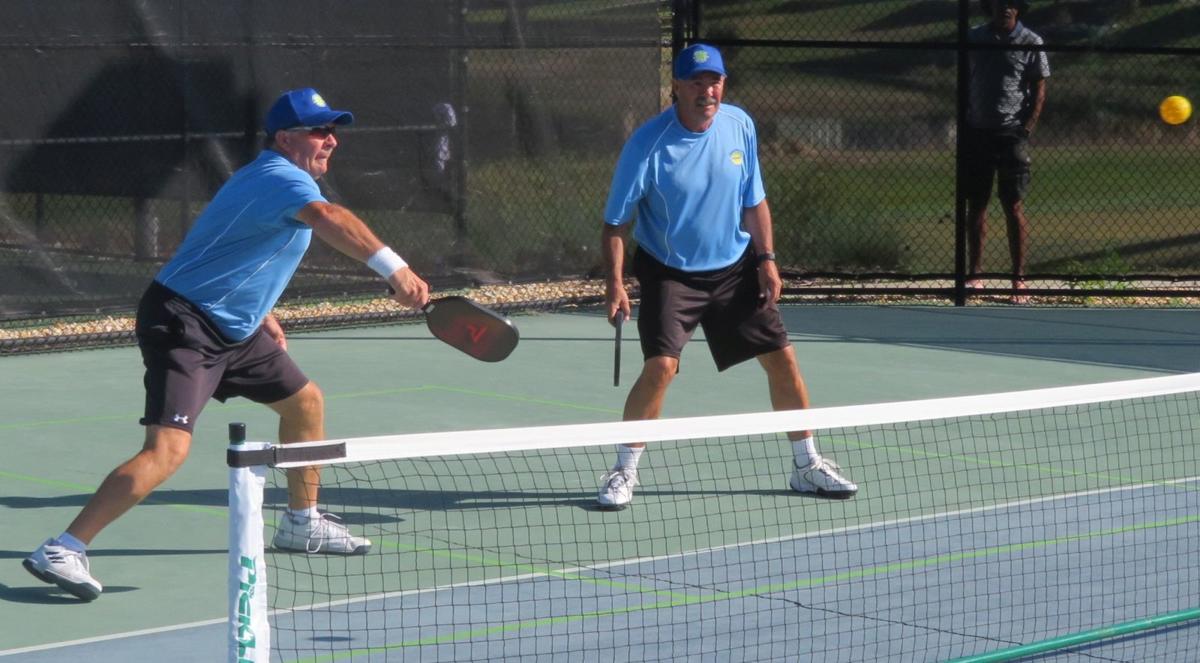 Each team played every other team once during the regular season. Lake Ashton was in first place with a 6- 0 record. Camp Inn’s win over Sun ‘N Lake in their match put Camp Inn second with Sun ‘N Lake finishing third, both with 4-2 records. Tanglewood and Del Webb Orlando had 3-3 records but a win by Tanglewood in their head-to-head play put Tanglewood in fourth place followed by Del Webb in fifth. Lily Lake placed sixth with a 1-6 record. Auburndale, playing in the league for the first time, was winless but amassed 129 points during the season.

As the coronavirus became a national emergency, teams had to make decisions about participating in the shootout with Lily Lake and Camp Inn opting not to compete. That left just five teams to challenge for supremacy.

“Best 8” refers to the make up of each team. Both men and women are eligible to play with each community sending its best eight players plus subs. At this year’s shootout, Auburndale’s Jan Eason was the only woman competing. Each team has four pairings ranked A, B, C and D. At the shootout, all of the A duos met in double elimination play as did the B, C and D partnerships.

Points were awarded for each win. A victory by an A team was worth nine points, while a B win earned seven points, C took six points and D got five points. The point structure was set up to guarantee that the best players would be placed in the A division, not lower down where they might have easy victories.

In early play, the two local teams met with Sun ‘N Lake defeating Tanglewood. In the A match, Sun ‘N Lake’s Chris Donaghy and Rene Smit combined to win over Tanglewood’s Jay Bowers and Mike Whalen. Tanglewood’s Grant McLaughlin and Dennis Aldridge lost to Sun ‘N Lake’s Bob Kollmeyer and Ross Myles in a hard-fought, closely contested three game match. The D pairing of Jeff Lindskoog and Joe Oblon from Sun ‘N Lake overpowered Tanglewood’s tandem of Jim Maynard and Steve Batey. That left the B teams, Gary Schinderle and Dave Kontowsky for Sun ‘N Lake and Mike Yuan and Don Leblanc from Tanglewood, on the courts playing the rubber match when the game was halted as Sun ‘N Lake had already taken the overall victory.

The win advanced Sun ‘N Lake to the winners’ bracket where they met up with the powerful Lake Ashton team. Schinderle and Kontowsky won the B match but Donaghy and Smit lost the A round as did Lindskoog and Oblon in the D matchup. Myles and Kollmeyer were on a roll in the third game of their C match when play was halted as Lake Ashton had already earned enough points for the team victory.

Tanglewood went into the consolation round where they were knocked out of the shootout by Del Webb. Tanglewood’s A team, Bowers/Whalen and B pair, Yuan/Leblanc were defeated. The C team McLaughlin/Aldridge won their game 15 to 7 and the D team, comprised of subs Guy Racette and Joel Dumouchelle, also took their game 15 to 7.

Del Webb went on to knock Auburndale out of contention setting up a match between Sun ‘N Lake and Del Webb. The locals won with strong wins in each of the A, B and C games. The D game wasn’t finished as Sun ‘N Lake had amassed enough points to take the victory.

In the gold medal round, all four players in the A group displayed amazing talent with quick movements, precise shots and extended rallies. The Lake Ashton duo, Graham Littlehales and Don Seavey, both newcomers to the community within the past year, proved to be too powerful for the talented team from Sun N Lake, Donaghy and Smit, taking the win by scores of 11-4 and 11-3.

Schinderle and Kontowsky played an extremely powerful B match winning the first game 11-2, losing the second 6-11 and bouncing back in the third with a convincing 11-7 win.

The C team of Ross Myles, a youngster at just 79 years of age, and his partner Bob Kollmeyer, started slowly, going down to defeat 5-11 in game one but quickly regained their confidence and battled back for impressive 11-2 and 11-4 wins.

As the A, B and C matches were wrapped up, Sun ‘N Lake had earned 13 points from the B and C wins to just 9 points for Lake Ashton’s A victory. It all came down to play in the D division where 5 points were up for grabs.

Joe Oblon and Jeff Lindskoog won the first game 11-9 and lost a squeaker in the second, 11-13. As the rubber match progressed, all of the spectators moved to watch the final teams in action and the pressure mounted on all involved. It was a close match throughout with the score being tied at 4-4, 5-5, and 6-6 before Sun ‘N Lake took what looked to be a commanding lead of 9-6. Lake Ashton’s Tom Fleming and Jay Brooks battled back to a 9-9 tie before Lindskoog and Oblon regained the lead 10-9 then Lake Ashton finished it off with three straight points for a 12-9 win.

Hill praised his partner, Ralph Rickard from Lake Ashton, who took care of statistics and communication this year. He also thanked his co-commissioner, Susan Price for her work in guiding the Ladies Division so well throughout the season. Kudos were extended to Bob Hofmann and his assistants from Del Webb for hosting the shootout.

It was noted by Hill that the level of play was better this year than in the past. He commended Auburndale for a fine effort in their first year of play and is optimistic that even more teams might be interested in joining the South Central Florida Pickleball League.

The league founder and original Commissioner, David Majick, was on hand to enjoy the competition in this, the 10th year of play in the South Central Florida Pickleball League. He is proud of what the league has accomplished in providing competitive play with a great social aspect with players getting to know other pickleball crazed players from surrounding communities.

Majick also commented on the ever increasing caliber of play in the league and was pleased to see that the weighted point system guaranteed that the C and D games played a factor in the final outcome of the shootout as they did with this year’s championship round.

Tanglewood’s Jimmy Maynard, the elder statesman of the league at 82, has played since the league’s inception. He has enjoyed league play through the years and commends the Tanglewood coach, Mike March, for his fine work with the team. Maynard claims this will be his last year in the league.

Another league original, Gary Schinderle, played for Highlands Ridge until their team merged with Sun ‘N Lake last year. He also agrees that the competition continues to improve and notes that younger people are taking over the game.