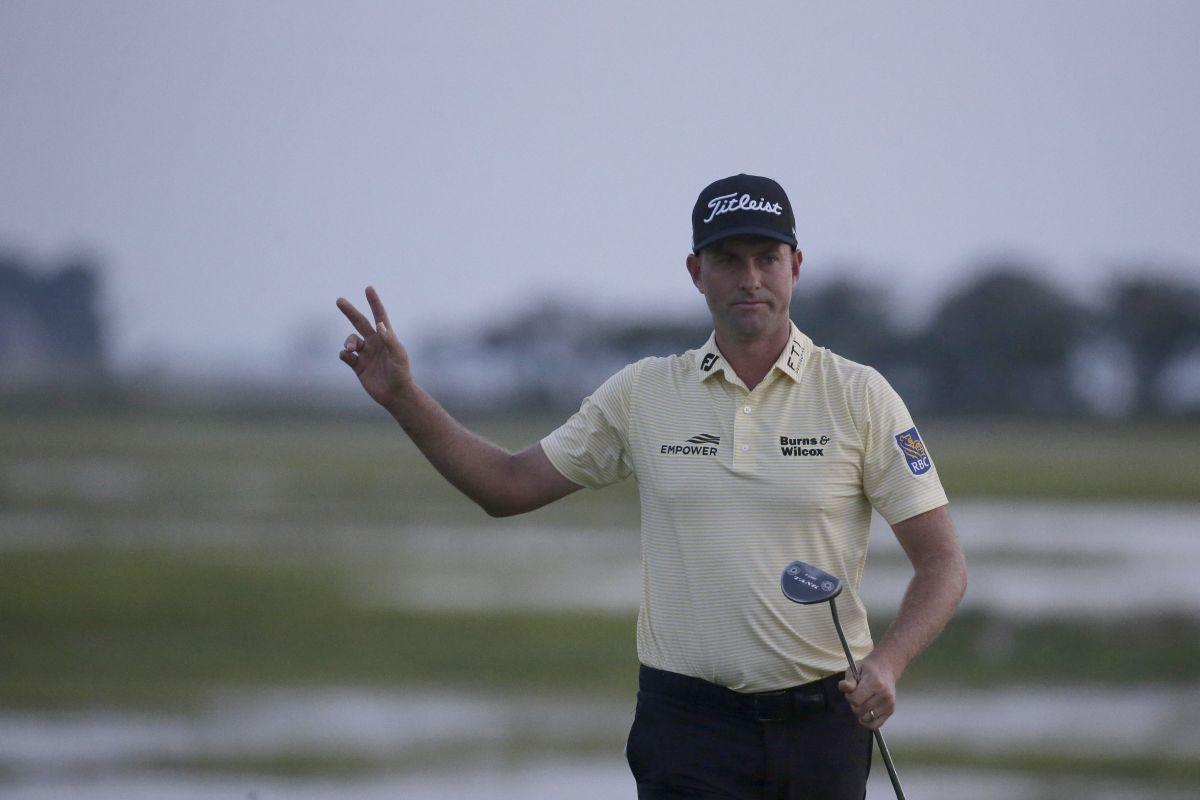 Webb Simpson waves as the sun disappears on the 18th green, on a course with no fans due to the COVID-19 pandemic, during the final round of the RBC Heritage golf tournament, Sunday, June 21 in Hilton Head Island, S.C. 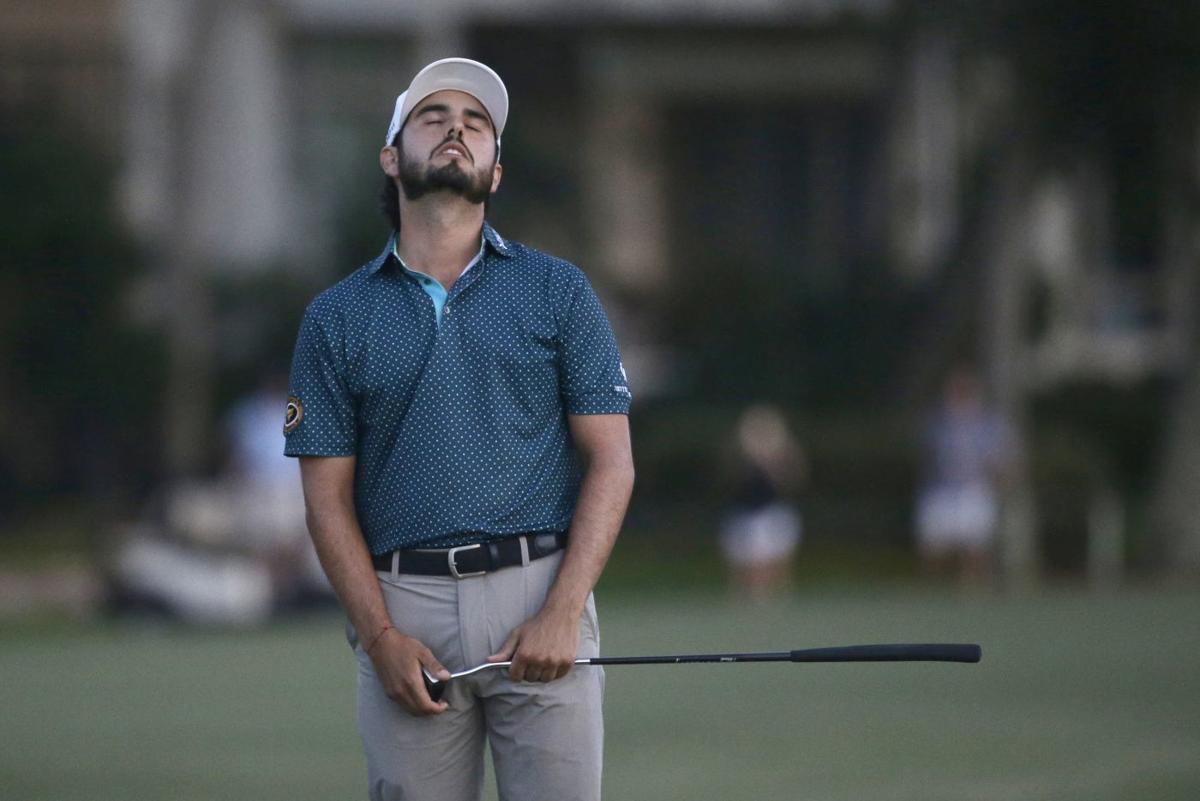 Abraham Ancer reacts after missing a birdie to lose to Webb Simpson by one stroke on the 18th green, during the final round of the RBC Heritage golf tournament.

Webb Simpson waves as the sun disappears on the 18th green, on a course with no fans due to the COVID-19 pandemic, during the final round of the RBC Heritage golf tournament, Sunday, June 21 in Hilton Head Island, S.C.

Abraham Ancer reacts after missing a birdie to lose to Webb Simpson by one stroke on the 18th green, during the final round of the RBC Heritage golf tournament.

HILTON HEAD ISLAND, S.C. — Nothing can top the first time Webb Simpson won on Father’s Day, a U.S. Open title eight years ago at Olympic Club and hearing his father’s laughter on the phone to share the joy.

Harbour Town was special in its own right.

Dressed in his Sunday yellow shirt — his late father’s favorite color — Simpson emerged from a crowd of contenders with five birdies in a six-hole stretch on the back nine for a 7-under 64 to win the RBC Heritage by one shot over Abraham Ancer and set the tournament scoring record.

A three-hour storm delay nearly kept it from finishing. Nine players were still in the mix with an hour to go. Simpson was two shots behind and had only two birdies on his card when he dropped in a 10-footer at No. 12 and off he went.

“I think it’s a good thing that guys were making birdies because they kind of forced me to be a little more aggressive and know that pars weren’t going to cut it,” said Simpson, who finished at 22-under 264 to break by two shots the tournament record Brian Gay set in 2009.

Father’s Day has been the final round of the U.S. Open every year since 1976, but it was moved to September in this most unusual year because of the COVID-19 pandemic that shut down golf for three months. The RBC Heritage filled the spot on the schedule and Simpson, now a father of five, became a winner for the second time this year.

“I won The Players on Mother’s Day after my dad passed away, and that was really special. That was an emotional win,” Simpson said. “U.S. Open on Father’s Day, I’ll never forget calling my dad after on the way to the press conference, and when he picked up the phone, he just was laughing. That’s kind of what he did when he was happy, he would just laugh. So I’m going to miss that laugh today for sure.

It was quite a show.

Simpson, Ancer, Joaquin Niemann and Tyrrell Hatton were tied at 20 under at one point late in the round. It was a matter of who blinked first.

Ancer, who hit every green in regulation, pushed Simpson to the end in his bid to win his first PGA Tour title. He holed a birdie putt from 10 feet on the 17th to get within one, but his approach to the 18th was 40 feet away and his putt to force a playoff came up short. Ancer closed with a 65.

“That’s just golf. You’ve just got to keep trying,” Ancer said. “I’m not going to change anything or work on anything. I’m just going to keep doing what I’m doing, and I think that will eventually happen.”

Colonial winner Daniel Berger also stayed in the mix by chipping in for birdie on the 17th and closing with a 65. Hatton, whose last tournament was his victory in the Arnold Palmer Invitational, was leading until a poor tee shot led to bogey on the 13th, and bogeys were hard to recover from on this day. He shot 66 and tied for third.

Simpson, who won the Phoenix Open in February, moved to No. 5 in the world. He also moved to the top of the FedEx Cup.

Dylan Frittelli had the low score of a tournament filled with them, a 62 that put him in the lead before the final groups even teed off. Justin Thomas had a 63 and tied him. Both knew it wasn’t going to hold up, especially after returning from a storm delay to still conditions and even softer conditions.

The PGA Tour now heads to the Connecticut for the Travelers Championship, and it’s still to be determined who will be playing until coronavirus tests are released for those on the charter flight.

The uncertainty stems from the first positive test — Nick Watney on Friday — along with tests for the 11 people who had been in close contact with Watney.

Those 11 people were given two tests, with the second set of results released Sunday night. Both tests came back negative for all 11.

Until the first tournament back at Colonial in Fort Worth, Texas, the area around Harbour Town was crowded with the start of summer vacation.

Those not on the charter will be tested upon arrival in Connecticut. Any positive test means a player must withdraw.