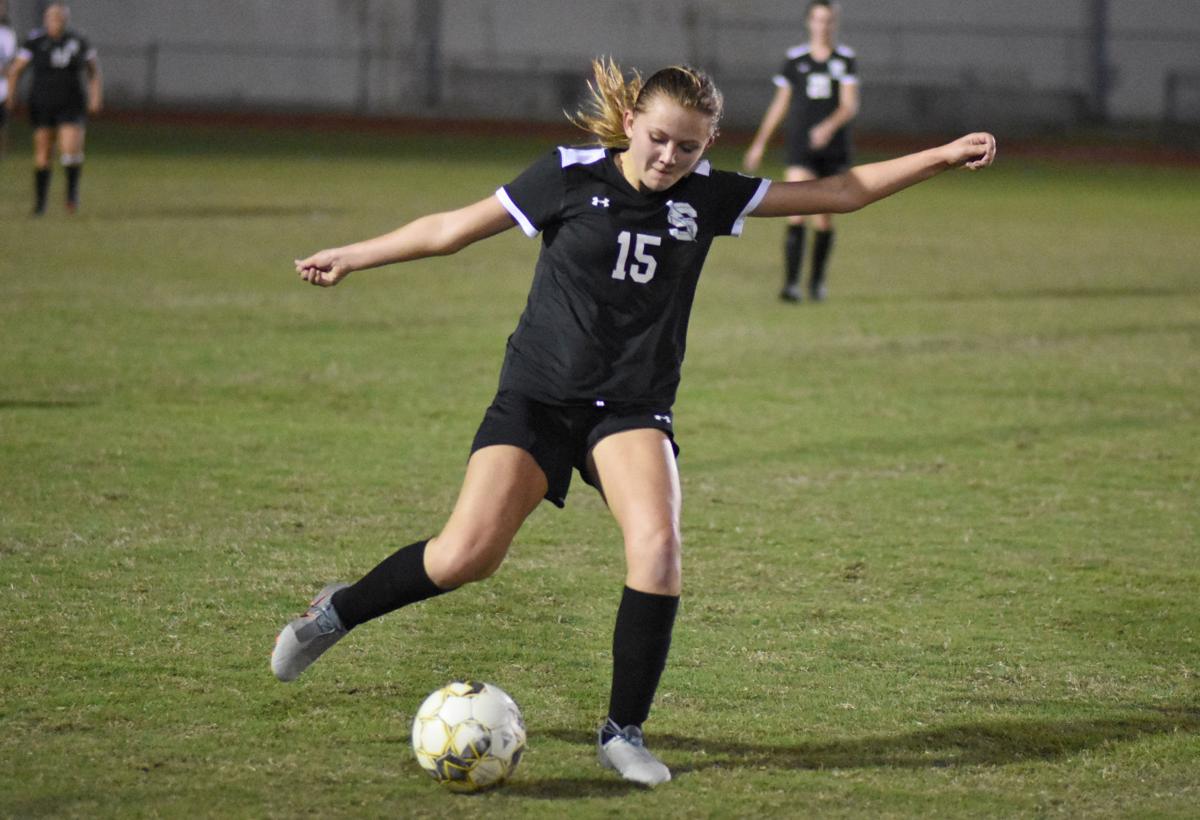 Sebring’s Cali Zimmerman (15) booted the ball down field during Thursday’s shutout against Okeechobee. 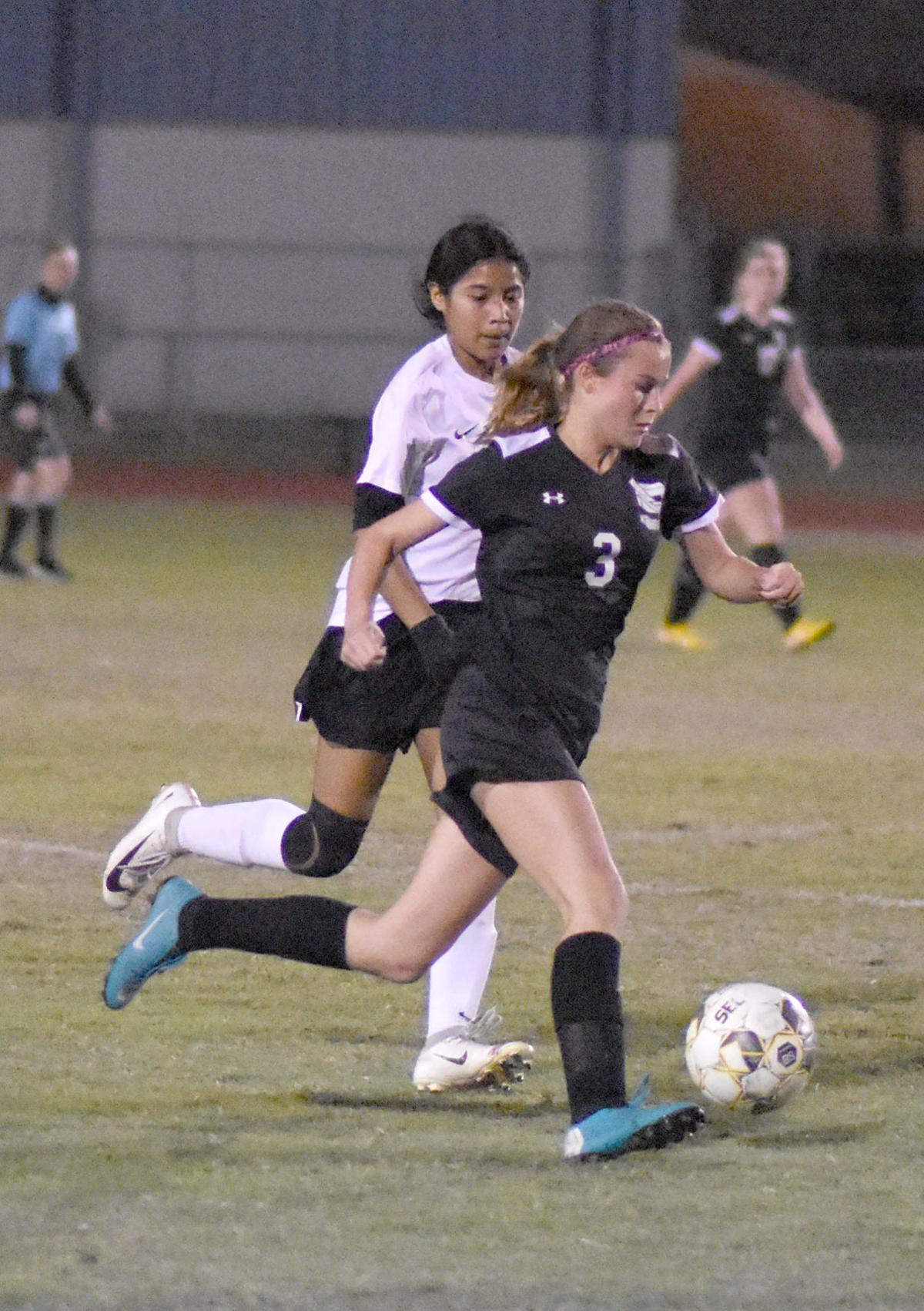 Sebring’s Jackie Lackey (3) charged down field during Thursday’s game. Lackey completed the hat trick and scored all of the Blue Streaks goals during the shutout against Okeechobee. 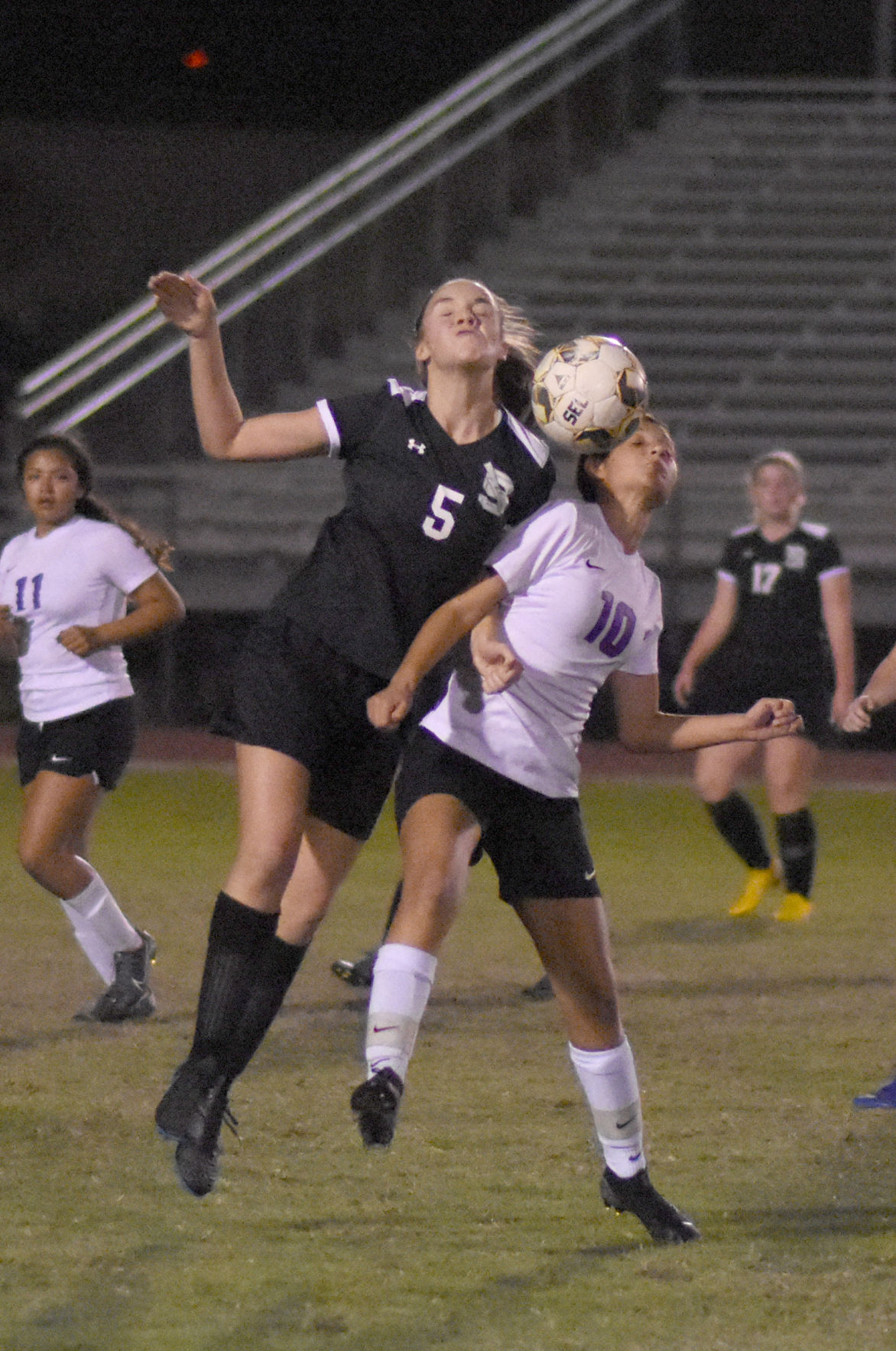 Sebring’s Elissa Nawrocki (5) and Okeechobee’s Isabella Saucedo (10) both went for a header during Thursday match. 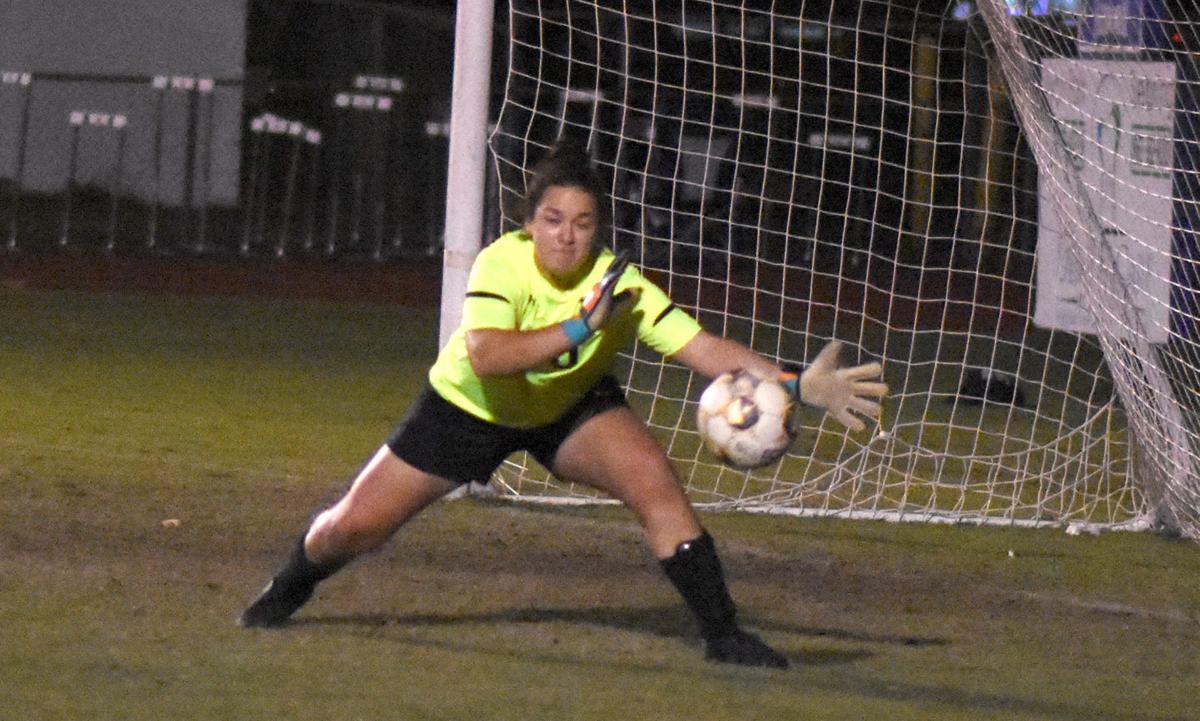 Sebring’s keeper Angie Oliveros lunged for a save during Thursday’s shutout against Okeechobee.

Sebring’s Cali Zimmerman (15) booted the ball down field during Thursday’s shutout against Okeechobee.

Sebring’s Jackie Lackey (3) charged down field during Thursday’s game. Lackey completed the hat trick and scored all of the Blue Streaks goals during the shutout against Okeechobee.

Sebring’s Elissa Nawrocki (5) and Okeechobee’s Isabella Saucedo (10) both went for a header during Thursday match.

Sebring’s keeper Angie Oliveros lunged for a save during Thursday’s shutout against Okeechobee.

SEBRING – The Sebring Blue Streaks dominated Thursday night against the Okeechobee Brahmans. With a strong defense, an impeccable goalie and Jackie Lackey leading the way with a hat trick, the Blue Streaks blanked the Brahmans 3-0 increasing Sebring’s record to 7-6-1.

“We played fabulous tonight and every game we are getting better,” said Sebring Coach Dr. T.C. Lackey. “Okeechobee is a good team that has only lost two games all year. We lost to them 5-4 the first couple of weeks into the season and now we defeated them 3-0 tonight.

“Obviously, our defense is gelling, our freshmen are starting to step up and our goalie is getting comfortable so we are going to see what we can do.”

Late in the first half Sebring’s Lackey charged down the field and rocketed the ball past Okeechobee’s keeper giving the Blue Streaks a 1-0 lead. The Brahmans tried to answer with a shot by Maria Aguirre that hit the side of the net.

“I think we played well especially since Okeechobee is nearly an undefeated team, having only lost two games,” said Jenna Murphy. “I am pretty proud of our team winning tonight even with two of our best players being out right now. I made some good plays and bad plays tonight.

“I love my team this season, we all get along and our goalie did really good tonight. This season my goal was to get a ball print on my leg and that already happened. My other personal goal is to make a couple more goals this season.”

The Blue Streaks expanded their lead when Lackey took a shot from the right side and found the back-left side of the net expanding Sebring’s lead to 2-0 with 8:15 left in the first half.

In the second half Sebring’s Lexey Payne kicked a free kick to Lackey who charge toward the goal. Lackey saw her shot and took it. Okeechobee’s keeper dove for the ball but missed and Lackey completed the hat trick giving Sebring a commanding 3-0 lead.

“I thought we played really well as a team tonight,” said Jackie Lackey. “We all communicated really well and we really wanted this win, we needed this win because we lost a couple of our last games.

“I was really excited to get a hat trick tonight. I was there at the right time and my teammates helped me out a lot. This season I want to make a lot of goals and for us to grow together as a team. By my senior year I hope to break the Highlands County record for the most goals which is 124.”

“We have five freshmen on the varsity team and every one of them are good,” Coach Lackey said. “Jackie (Lackey) is a legit scorer. She put the ball in the net. She has made 18 goals so far this season. She is doing really well. This was her second hat trick of the season and I think she has few more left in her.

“Our goalie Angie (Oliveros) went from not playing last year to looking comfortable at the goal. Every game she is getting better. She made well past 20 saves tonight and made it look easy.”

Sebring’s defense kept the pressure on and did not allow the Brahman’s to score.

Sebring hosted the Lake Placid Green Dragons in a county rivalry game Friday night, results were not available at press time. The Blue Streaks are on the road Monday to face the Lake Gibson Braves staring at 8 p.m.