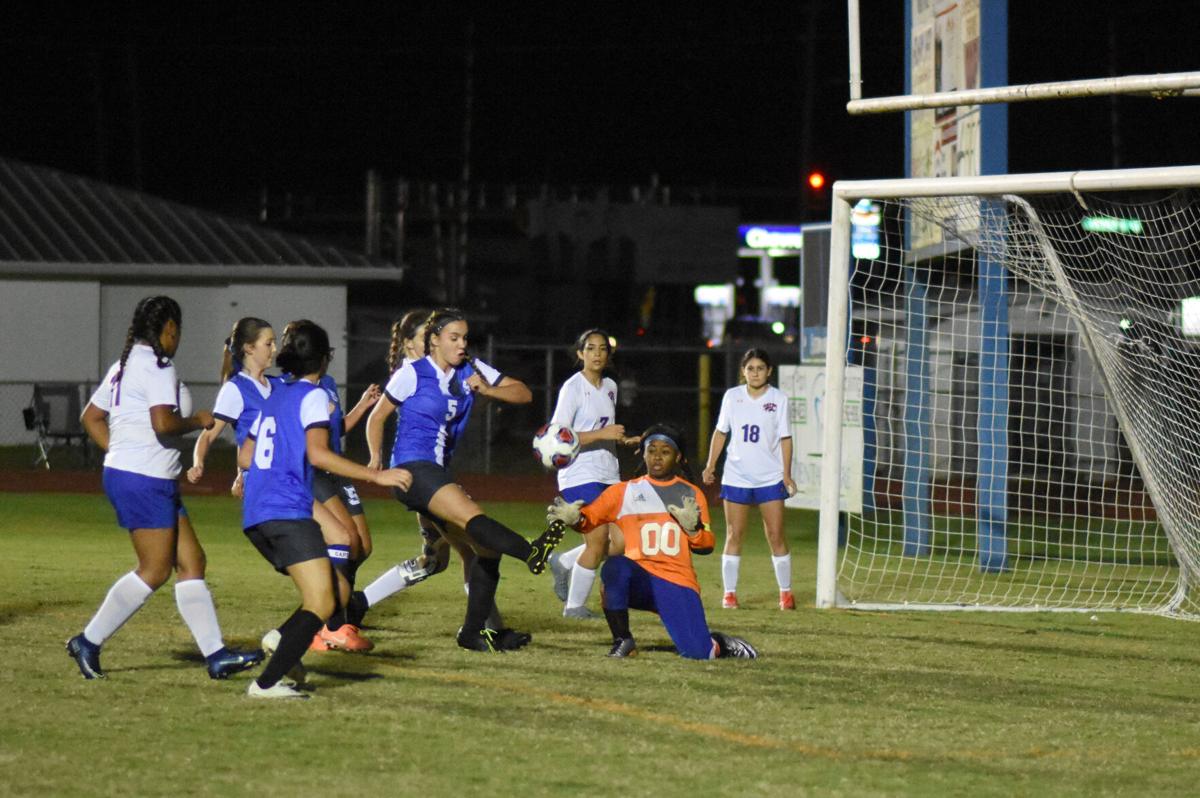 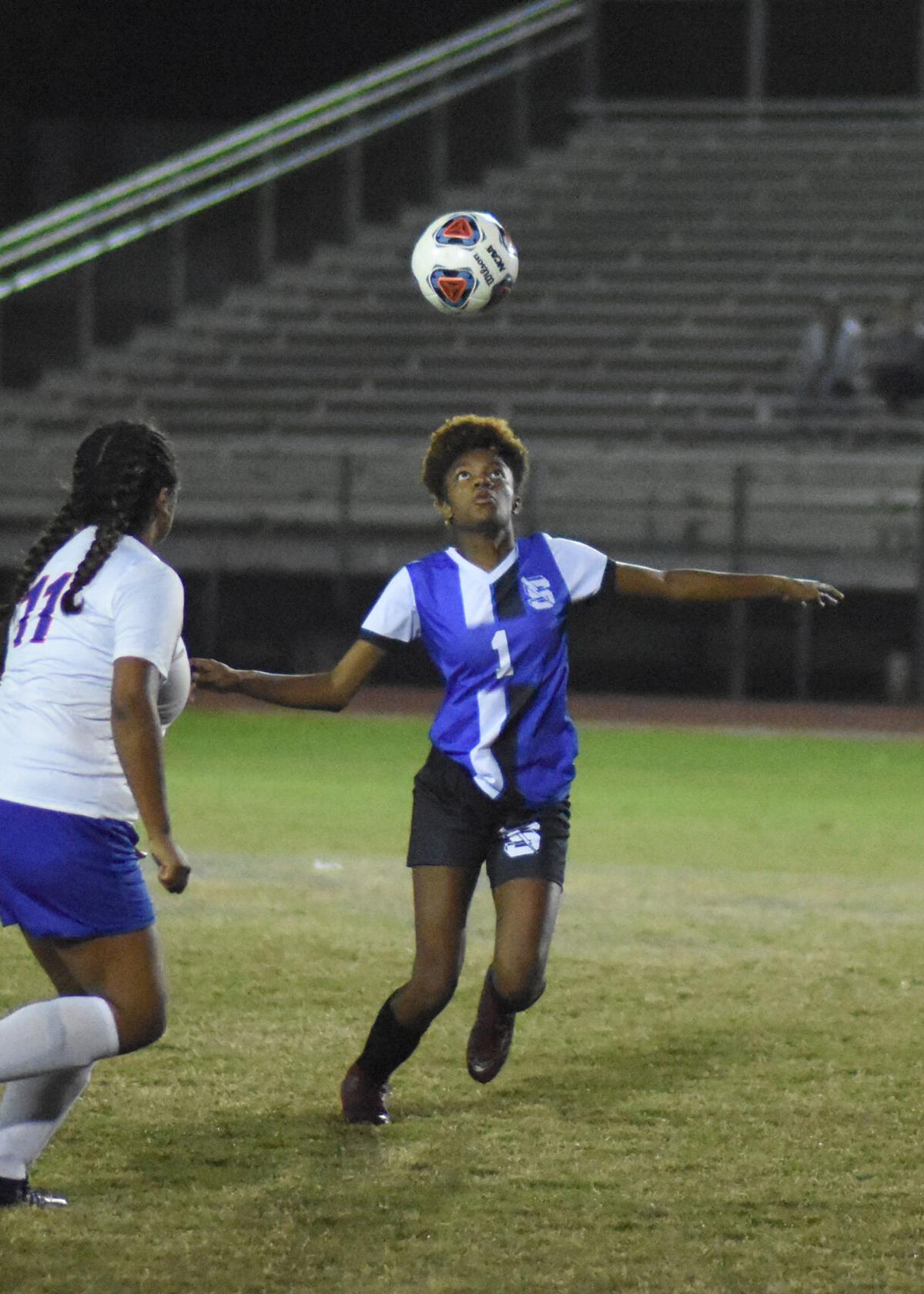 Sebring’s Leilani McMillan (1) keeps her eye on the ball. McMillan scored the Blue Streaks only goal. 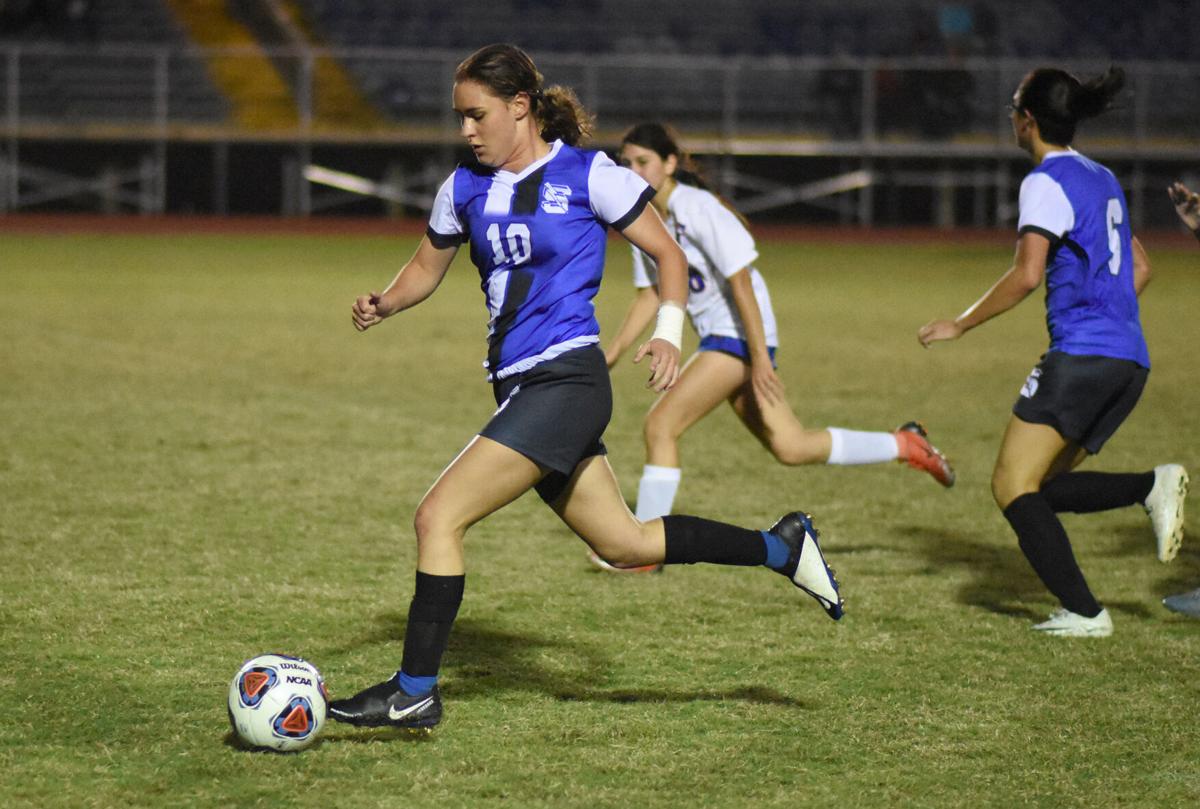 Sebring’s Shyann DeBree (10) dribbles the ball down field during Thursday’s match against Hardee. 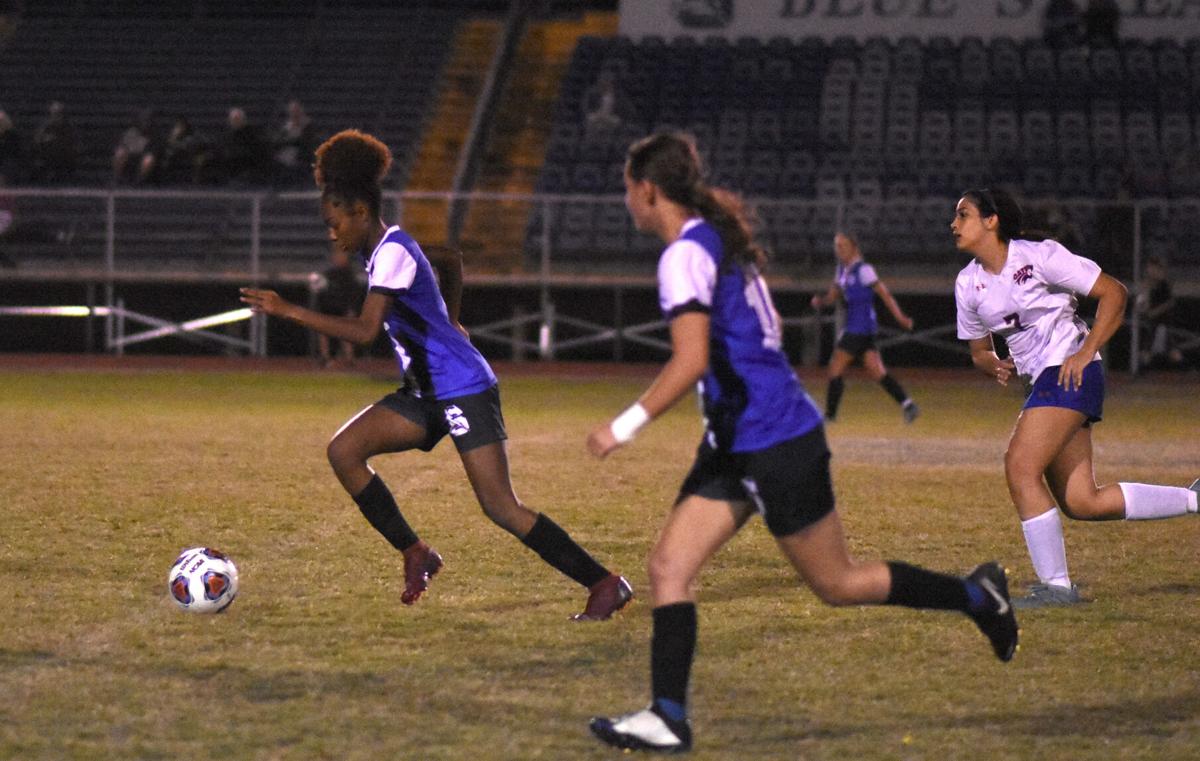 Leilani McMillan (1) broke away from Hardee’s defense and charged down field for a goal during Thursday night’s game.

Sebring’s Leilani McMillan (1) keeps her eye on the ball. McMillan scored the Blue Streaks only goal.

Sebring’s Shyann DeBree (10) dribbles the ball down field during Thursday’s match against Hardee.

Leilani McMillan (1) broke away from Hardee’s defense and charged down field for a goal during Thursday night’s game.

SEBRING — The Sebring Blue Streaks and Hardee Wildcats were evenly matched Thursday night. The scoring did not begin until late in the second half. Both teams battled until the end but the Blue Streaks and Wildcats ended in a tie at 1-1. This brings Sebring’s record to 0-2-1.

“We did good,” said Sebring Coach T.C. Lackey. “We fought well and we are just going to have to adapt a little bit. We have become a defensive team and we need to find someone to score some points for us. We will get there.”

“Our leading scorer (Jackie Lackey) from last year with 25 goals and she was four goals into this year is now out with a torn ACL,” stated Lackey. “She is out the rest of the season so someone has to step up now. We will get there, rearrange some of the lineup and make it happen.”

In the first half the Blue Streaks and Wildcats battled for control but neither team were able to find the back of the net resulting in a scoreless first half.

“Defense is doing well,” stated Lackey. “We are young across the board. We have four seniors out there but they are not on the defensive side of the ball so we have to learn defense.”

Hardee’s Ashley Tharp charged down field and took a shot on goal but Sebring’s keeper, Angie Oliveros, dove to block the ball but before Oliveros could respond Tharp rebounded and hit the back of the net for a goal. Tharp’s goal gave Hardee a 1-0 lead with 10:25 left in the game. Oliveros made eight saves for Sebring on the night.

“Angie (Oliveros) is always good,” Lackey said. “She has only played three years and it is amazing how much she has learned to play the game. She never played before then and now she is doing real well. She gets a lot of balls at her so she has to wake up.”

Sebring’s Leilani McMillan was injured early in the second half. While running full force down field McMillan collided with a Wildcat defender and took a hard hit to the chest area. After a breather McMillan was able to return to action and broke away, she charged down field fighting off several Wildcat defenders. McMillan launched the ball past Hardee’s keeper to even the score at 1-1 with 4:20 left in the second half. McMillan led the team in shots on goal with six.

Sebring and Hardee battled for control of the ball but neither team was able to get another point and the game ended in a tie with a final score of 1-1.

“We can never beat Sebring,” stated Hardee Coach Niki Rast. “We always end in a tie or they beat us. Just once I would like to beat them. It was a hard fought match tonight.”