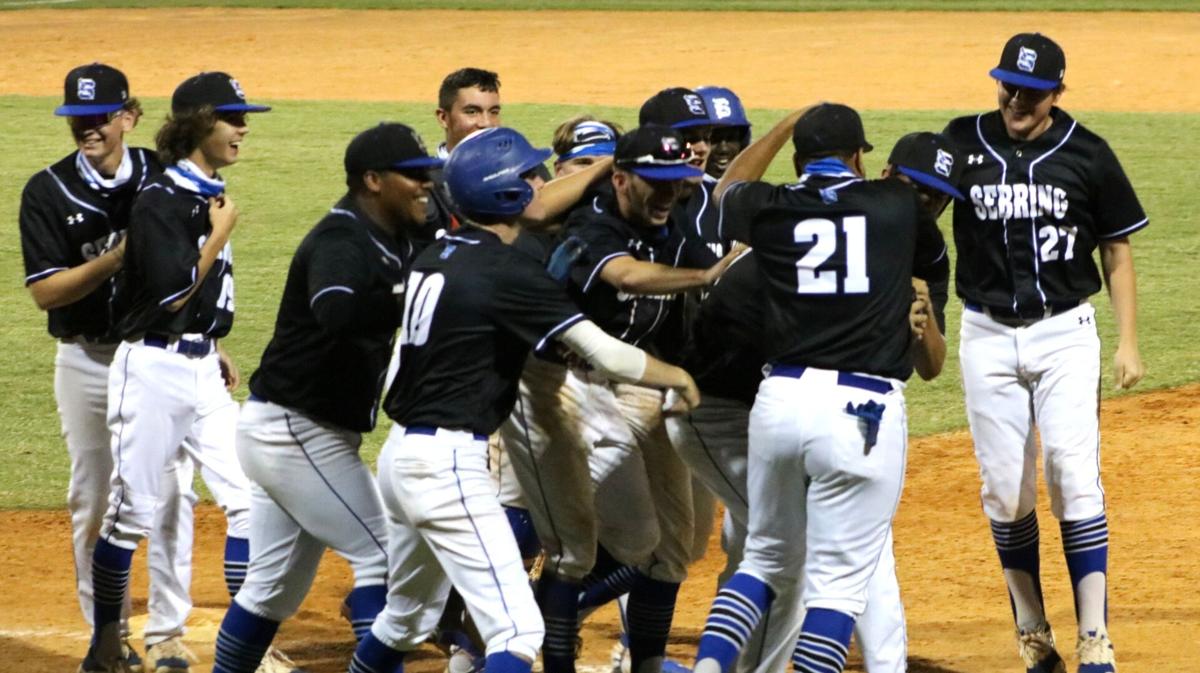 Sebring’s Rhett Vaughn is mobbed by his teammates after his game-winning single Tuesday night against Lake Wales. 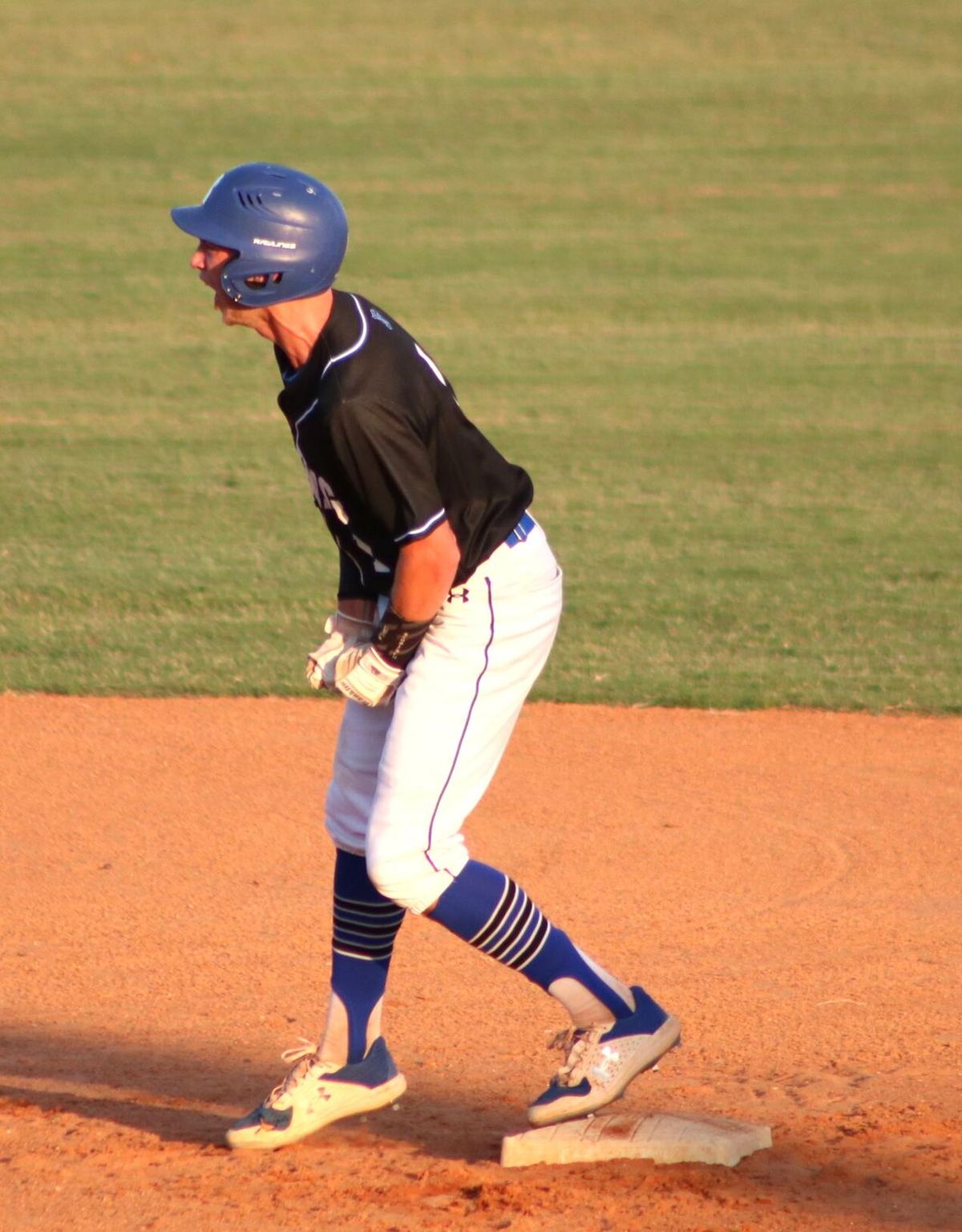 Joey Warner shows his excitement about the Blue Streaks getting two runners on with no outs in the first inning. 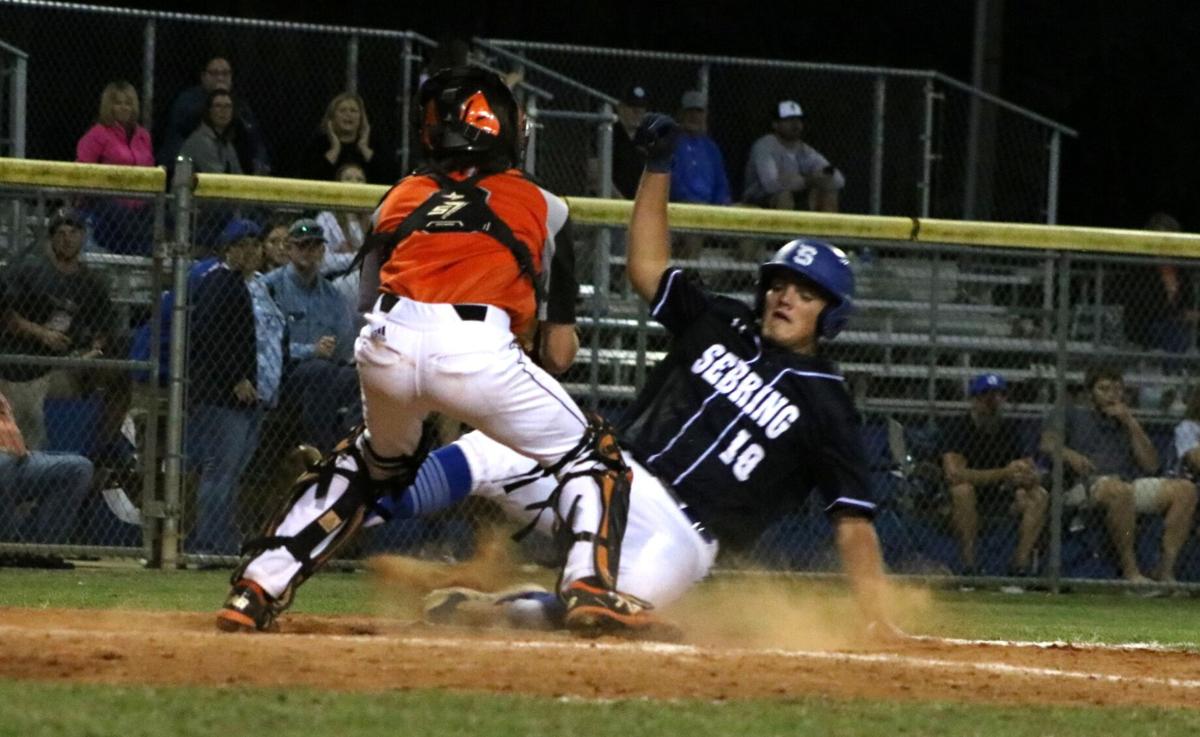 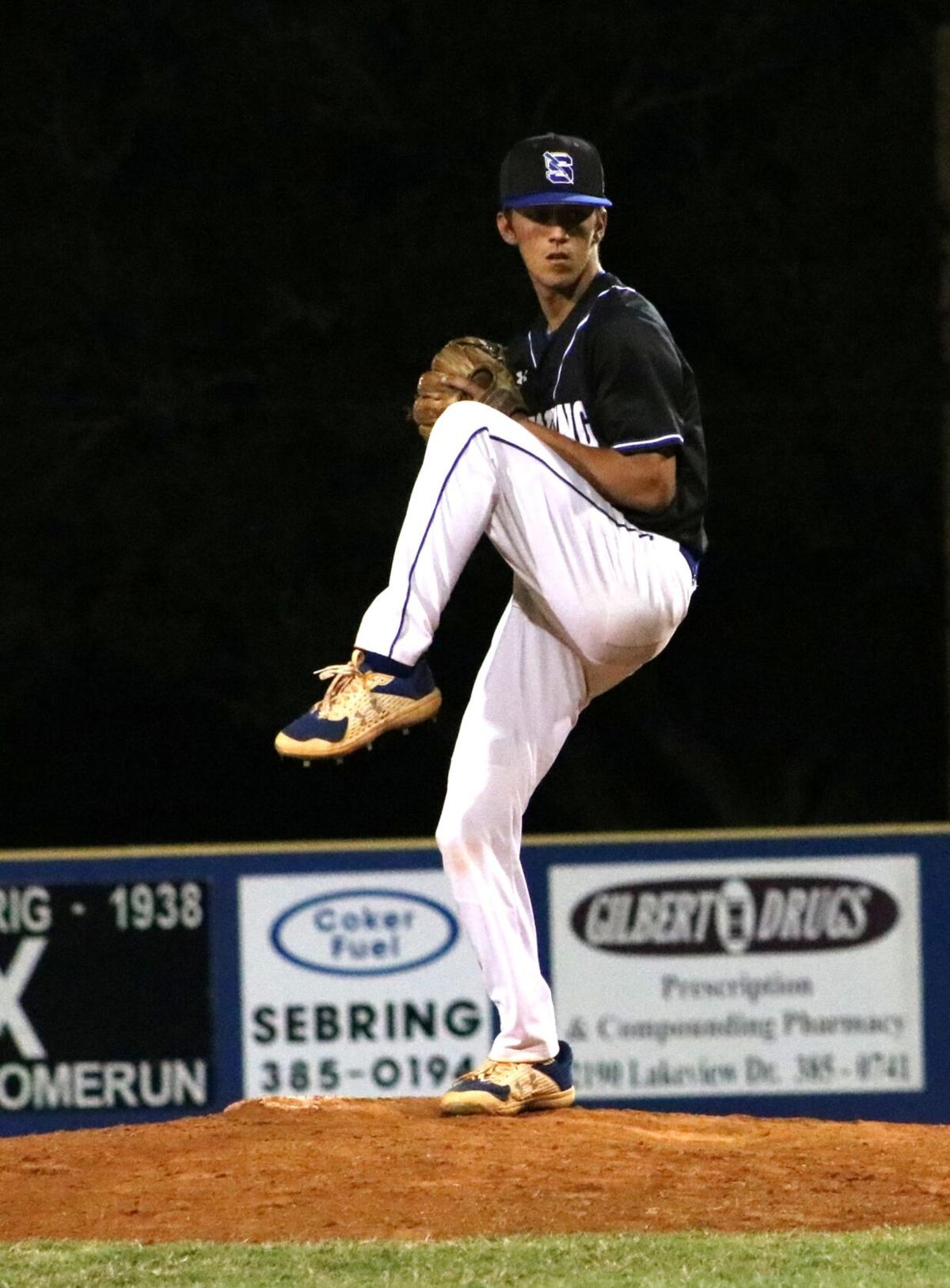 Sebring’s Rhett Vaughn is mobbed by his teammates after his game-winning single Tuesday night against Lake Wales.

Joey Warner shows his excitement about the Blue Streaks getting two runners on with no outs in the first inning.

SEBRING — A great all-around performance by the Sebring Blue Streaks Tuesday night has them within one win of being District Champions.

The Blue Streaks earned a 10-0 run-rule victory over the Lake Wales Highlanders for a spot in the championship round of the Class 4A-District 11 tournament.

“We were able to get on them,” Sebring Coach Jasone DeWitt said. “Our guys were focused today and they were ready. I’m proud of these guys.”

Zach Doorlag manned the bump for Sebring. He found himself in a pickle early. After starting the game with a hard-hit groundout to second base, Doorlag walked a batter and hit another.He kept the Highlanders off the board with a strikeout looking to the cleanup man on four pitches followed by a force out at second.

Doorlag led off Sebring’s bottom half of the first with a single up the middle. Shortstop Joey Warner smacked a pitch into centerfield and was able to take second on a throw to third. The second he was safe, fans could see him scream with excitement at his team coming out of the gate strong.

“He (Joey Warner) is a senior. He’s a leader for our team,” DeWitt said. “The good thing about this group is they don’t need a lot of motivation. If (Joey) doesn’t have a great day, he’s still leading guys and he doesn’t feel sorry for himself, but then these guys will pick him up if he’s struggling. Even the freshmen are going to pick them up.”

First baseman Trey Bender brought Doorlag home on a groundout to shortstop. Sebring was on the board 1-0. It stayed at 1-0, though, as Warner was thrown out at home and third baseman Reid Whitehouse struck out to end the inning.

Doorlag stranded a runner at second to keep the Highlanders scoreless in the second. The Blue Streaks went without a run too, unable to capitalize on Trey Rowe reaching on a dropped third strike.

The Streaks’ hurler found himself in trouble again in the third. A double by the Highlanders’ Shalor O’Bryant then a passed ball and a walk to Mason Hixenbaugh gave Lakes Wales runners on the corners with one out.

But the Sebring pitcher got himself out of it with a bunt attempt gone awry for Lake Wales. Simon Scharff bunted the first pitch he saw up in the air long enough for Doorlag to catch it for the out. He then turned, fired to first and caught Hixenbaugh off the bag for the inning-ending double play.

Sebring’s offense wouldn’t let that play happen in vain as it took control in the third.

Warner singled into right field, followed by a walk from Bender and Case McClelland was hit by a pitch to load the bases for Whitehouse.

The Blue Streaks got a run on an overturned double play call. Bender was forced out at third on a diving play by the Lake Wales third baseman and Warner scored.

Rowe then doubled into left field, scored McClelland’s courtesy runner in Peyton Spencer and gave Sebring runners on second and third with one out. Cameron Kimbrell singled and scored both Whitehouse and Rowe for a 5-0 Sebring lead.

Lake Wales then changed pitchers but it didn’t stop the Sebring attack.

The Blue Streaks tacked on another run in the fourth. A sacrifice fly with the bases loaded by Rowe scored Warner from third. Bender then ran into an out on an attempted steal of home to end the inning and the Sebring threat.

Both teams traded outs until the bottom of the sixth, including a great double play turned by the Streaks defense to erase a leadoff single by Lake Wales in the sixth.

Warner worked a one-out walk, Bender hit a laser on the ground by the first baseman and McClelland hustled down the line for an infield single. Warner scored on that play and Whitehouse brought home Bender the next at-bat on a single up the middle. A groundout by Rowe moved the runners over to second and third. After a hit-by-pitch, Vaughn came to the plate ready to play hero.

Down 1-2 in the count, the left fielder smoked a line drive into the outfield to score Spencer and give Sebring the mercy-rule win.

As a team, the Streaks finished 14-for-29 (.483 average), 10 runs scored, three walks earned and only five strikeouts at the plate.

DeWitt felt his team had a pretty good approach at the plate. It was a little disappointing when batters left some runners stranded or struck out when they shouldn’t. But he said they know those mistakes and will get them corrected.

Warner led all batters with a 3-for-3 performance, three runs scored and a walk. Meanwhile, Whitehouse, Rowe and Kimbrell all tied with two runs batted in apiece.

“Joey had a great approach,” DeWitt said. “I’ll tell you, probably the last two days, he’s struggled there in BP (batting practice) and he just decided ‘I’m going to be a gamer out there, and I’m just going to play. I’m not going to worry about anything else that goes on. I’m just going to be me.’ When he’s him, he does a good job.”

Doorlag earned the win Tuesday with a six-inning-complete-game shutout. He finished the night with three hits and three walks allowed with four strikeouts.

According to DeWitt, Doorlag didn’t pitch more than an inning for over three weeks before his start. They shut him down for a little just to get him some recovery. Nothing better than coming off the shelf for a shutout win.

“He had good velocity, he missed some spots,” DeWitt said. “He’ll tell you that it wasn’t a perfect night, but some of the pitches that he missed were just good enough misses that we were able to get some fly balls.”

His defense made some great plays to help him out. One being a diving stop by Bikar Jr. in the second inning for an out at first. Another was a great double play to get rid of a leader runner and escape the sixth turned by Bikar Jr. and Warner.

That’s something DeWitt expects from his middle infielders. That diving stop is just “Beny being Beny.” DeWitt felt his team had a good scouting report on the Highlanders, which allowed them to be well-positioned to make plays.

“We didn’t move a whole lot once the ball was hit where we positioned them and it goes to ‘Lag (Doorlag) hitting the spots that we wanted,” DeWitt said. “We felt like if he hit the spots and he threw the pitches for the spots that we needed, we felt pretty comfortable about where to position guys.”

Sebring takes on the Hardee Wildcats Thursday night in the District Championship. The Wildcats defeated Avon Park 6-2 Tuesday night. Despite two losses in the regular season, they played Sebring close in both games, including a 4-3 loss at Firemen’s Field.

DeWitt knows how good Hardee is and how important it is for his team to enjoy its win on Tuesday while also making sure they don’t revel in it too much.

“Everything that’s happened during the regular seasons is out,” said DeWitt. “This is the real season now and at the end of the day, we just we got to take every game just as a great opportunity. We told our guys ‘You’ve had an opportunity to play this game your whole life for this situation. This is why you came out in January. This is why you battled during the off-season, this is why you did the little things to make yourself better is for tonight (Tuesday) and beyond.’”