This season the Sebring Blue Streaks will have to play without the support of their student fan section at each game. 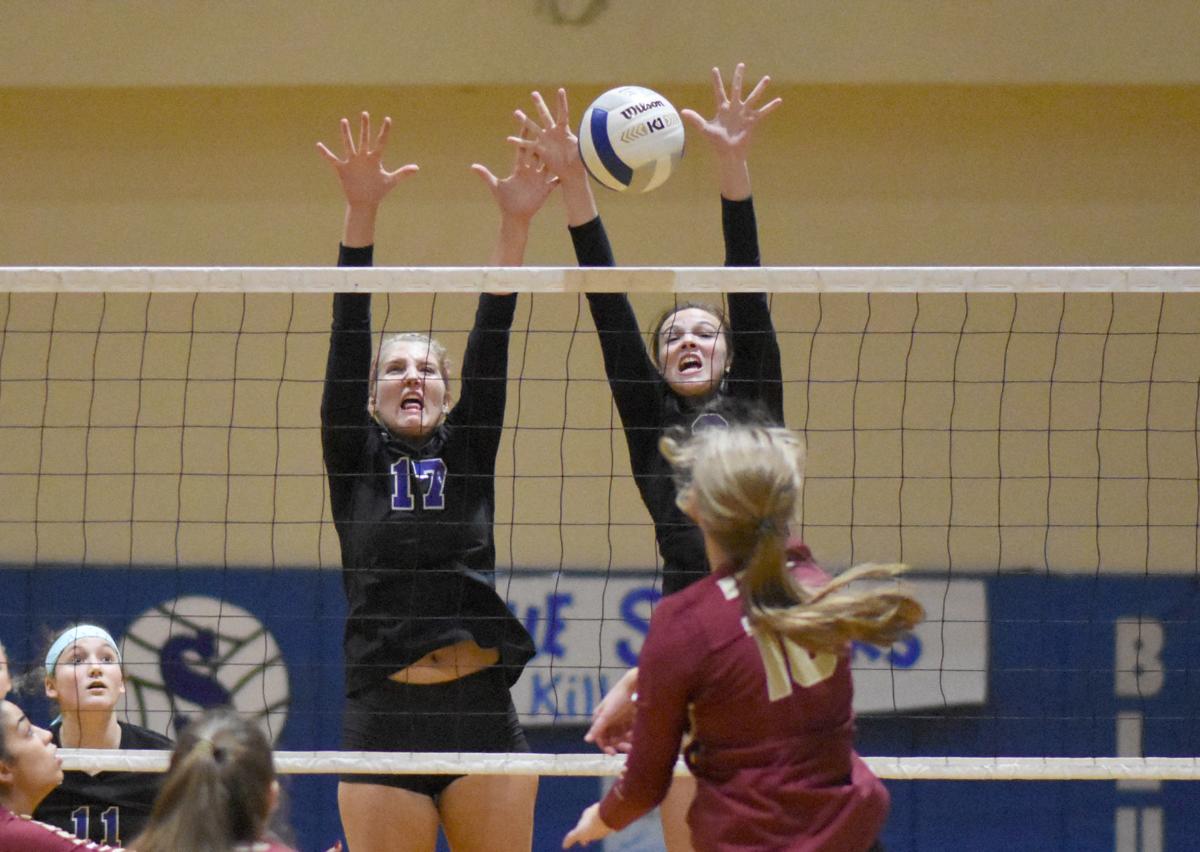 Sebring’s Allie Collier (17) and Ashley Bible (3) leaped into the air to block a hit last season against Lake Gibson.

This season the Sebring Blue Streaks will have to play without the support of their student fan section at each game.

Sebring’s Allie Collier (17) and Ashley Bible (3) leaped into the air to block a hit last season against Lake Gibson.

SEBRING – The Sebring Blue Streaks have endured quarantine, at-home conditioning and uncertainty all before the season has even begun. Due to COVID-19 the Blue Streaks only had two weeks to prepare for the season.

“Practice are a little bit different and unique but we are making it work,” said Sebring Coach Venessa Sinness. “Games will also be different for spectators with only four tickets being sold by each player, including the visiting team. Spectators will be temperature checked, the stands will be roped off with every other row off limits and face masks have not been decided yet. Tickets will have to be pre-purchased.”

Sebring has a strong team with 10 returning players this season with only two graduating last season.

“I have some good returning players that will fill in those spots and I think we will be stronger than we were before,” Sinness said. “We are trying to find our momentum. When we were able to get into the gym we were only allowed nine girls at a time so I didn’t have 12 girls until recently. It made it hard to do anything without 12 girls.

“It is good to have a full team and to be able to see where we are. We are pretty close to where we were last year but we are a little out of shape. I’ve always said my girls will be fine in five set matches but I think we are going to struggle this year but I think everyone is in the same boat with that. Last year we conditioned three to four days a week all summer long and this year we only were able to condition two days a week starting in June with only nine girls at a time. We have to get back into volleyball shape and see how it goes from there.”

The Blue Streaks have a few players stepping up into the leadership role.

“Allison Pate has really shown that she worked her butt off in the off season,” said Sinness. “I have eight seniors this year including my daughter Jordan (Sinness) and Carly Webb who will be very helpful. Carly will be our libero this season and I think we will be stronger with her in that role.”

There have been a few changes made this season such as no concession stand, no changing sides between sets, temperature checks for everyone including the athletes and only four tickets per athlete to be sold which will limit the capacity at each game. For the Blue Streaks not having their enormous student section to cheer them on will be hard.

“Our mental mindset has to be different because our intensity, motivation and drive will have to come from within,” explained Sinness. “Our home gym has always be very advantageous but our numbers will have to be cut drastically. It is going to be more about self motivation, self drive and feeding off of each other because we will not have the crowd like we normally would. My girls love and live for their crowd so it will be a lot different.”

The Sebring Blue Streaks first game will be Tuesday against Winter Haven. The Blue Streaks will travel to face their long time county foes the Lake Placid Green Dragons on Thursday. There was a match scheduled on Monday, Sept. 21 against the Avon Park Red Devils but due to COVID-19 that game has been cancelled. Sebring’s first home match will be Tuesday, Sept. 22 against Lakeland, which will be Senior Night.