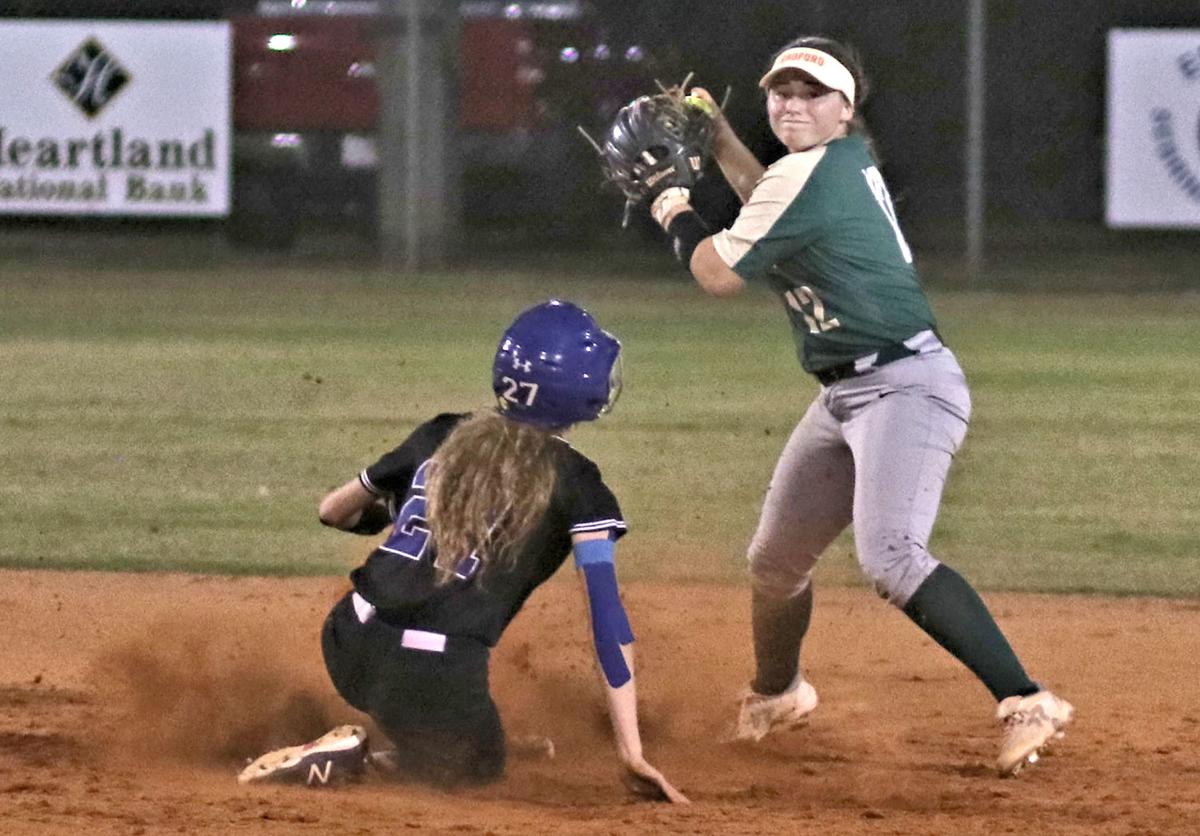 George Jenkin’s Paityn Moore looks to turn the double play after forcing Sebring’s McKinley Carver out at second base. 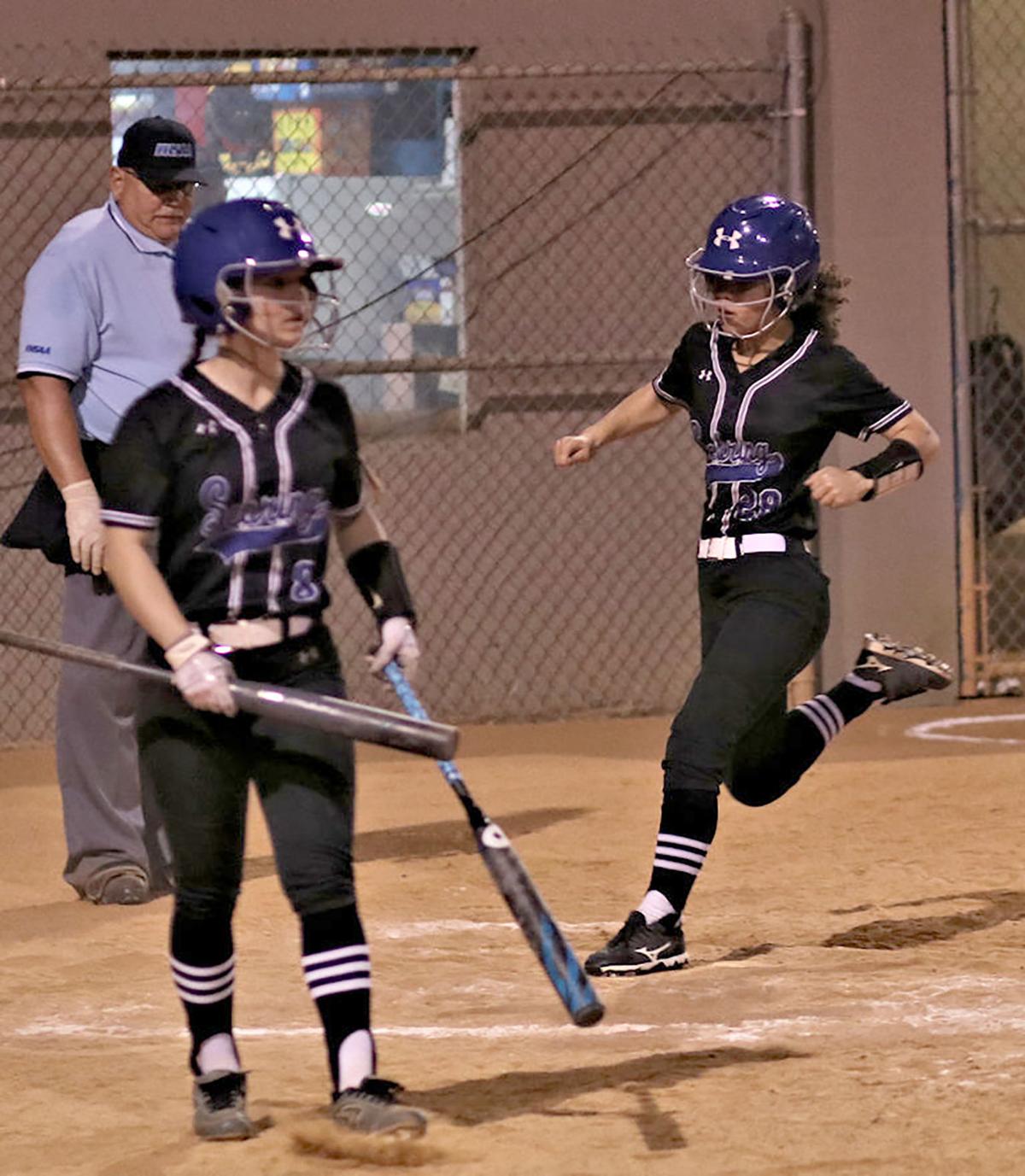 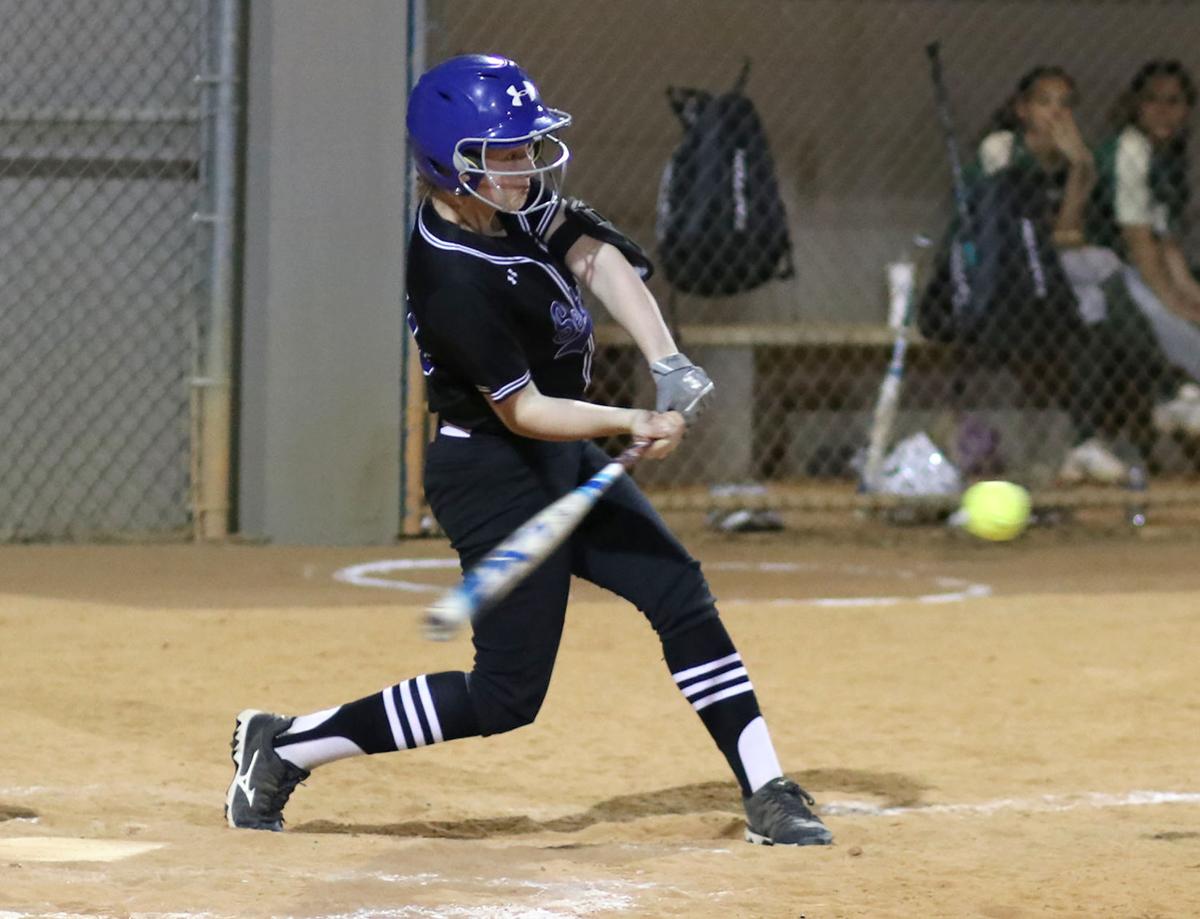 Sebring’s Emily White had two base hits and scored once against George Jenkins.

George Jenkin’s Paityn Moore looks to turn the double play after forcing Sebring’s McKinley Carver out at second base.

Sebring’s Emily White had two base hits and scored once against George Jenkins.

SEBRING – The Sebring Blue Streaks softball team stranded the bases full with the tying run on second and winning run on first as their seventh inning falls short in a 4-2 loss to the George Jenkins Eagles. The loss snapped a two game winning streak that Sebring had put together to fall to 7-3 on the season while George Jenkins improved to 6-6 with the win and they snapped a two game losing streak.

George Jenkins took the lead in the top half of the first on a pair of doubles. Olivia Davis led off the inning with a double into center field and scored two batters later when Paityn Moore doubled into left field to put the Eagles up 1-0.

Davis would strike again in the third inning with another double into center field and advanced to third on a bunt single by Madison Knight. Knight stole second and the Blue Streaks walked Moore intentionally to load the bases with one out.

In an effort to stop the Eagles from scoring by setting up a force out at any base, preferably at home, became a short term nightmare as two wild pitches allowed both Davis and Knight to score as George Jenkins increased their lead to 3-0.

Sebring pitcher Maci Barnhart limited the damage with two strikeouts, preventing the Eagles from posting anymore runs and keeping the score at 3-0.

George Jenkins added another run in the sixth inning as Moore led off with a laser ground ball to third base that went off the third baseman’s leg into foul territory for the infield single.

Moore scored two batters later as Kady Trotter doubled to the left field fence to build what seemed to be an insurmountable 4-0 lead into the seventh inning as the Blue Streaks were held scoreless the first six.

Sebring did not go quietly as Emily White singled into left and reached third on a double by Angie Oliveras that hit off the center field fence with no outs.

Two pop outs made the situation look bleak for the Blue Streaks as White remained on third and Gianna Dunbar on second as a pinch runner for Oliveras.

Alyssa Perez brought life back into the Blue Streaks with a line drive single into right field that scored White and Dunbar to cut George Jenkins lead in half 4-2.

A walk to Mackenzie Ferryman and a single by McKinley Carver loaded the bases with two outs.

Sebring’s attempt to stage a comeback victory eluded them when Trinity Rohrer grounded to George Jenkin’s shortstop Olivia Davis, who made the unassisted force out at second base to end the Blue Streak threat and preserve the 4-2 win over Sebring.

Davis led the Eagles with three hits and scoring two runs and Ashley Penix pitched all sevens innings, giving up two runs on seven hits while striking out three.

With the schools closing and sporting events cancelled, it is unsure when there will be another game this season.