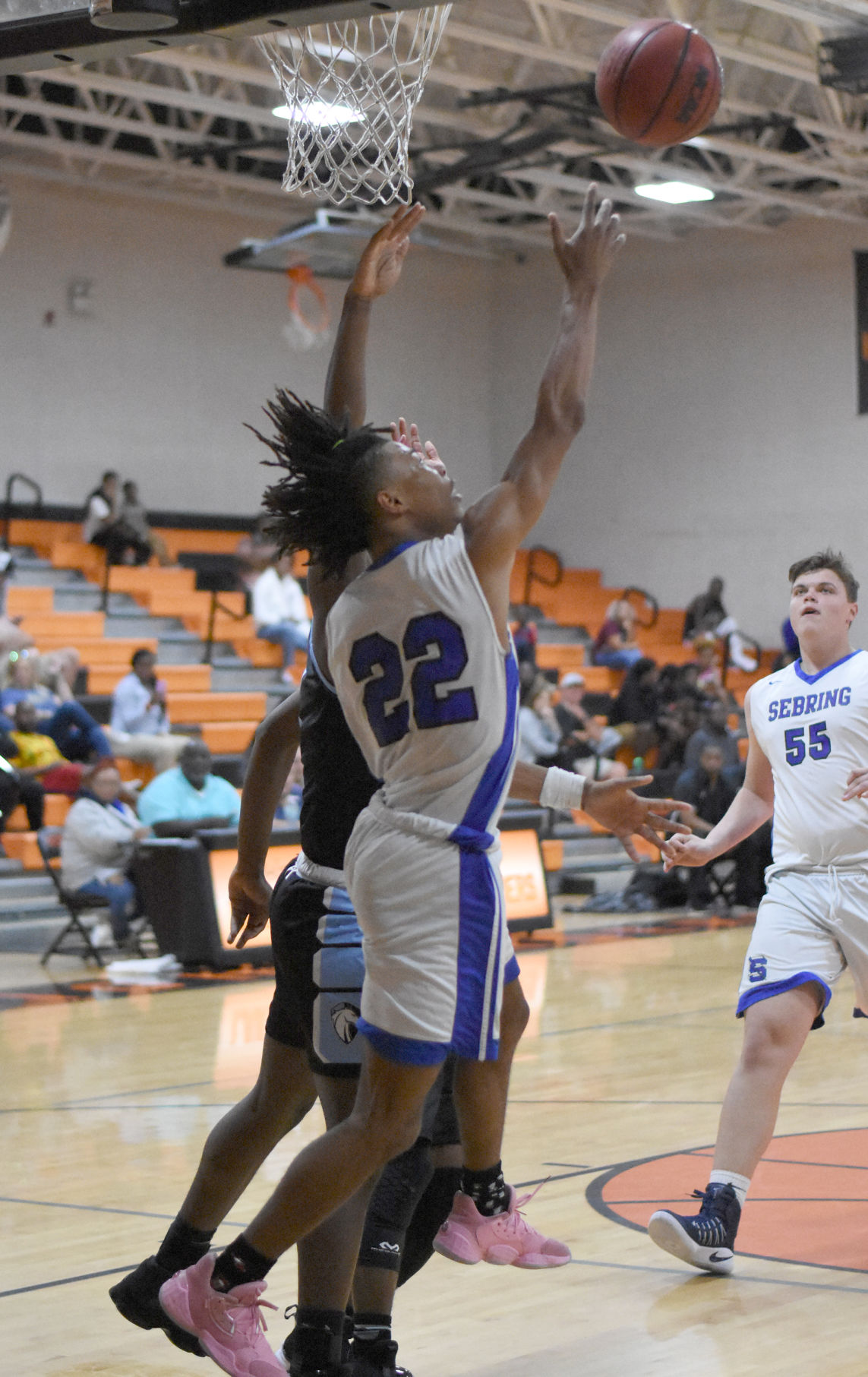 Sebring’s Ryan Brown (22) made a shot over his shoulder during Tuesday night’s District Semifinal game against Lake Region. 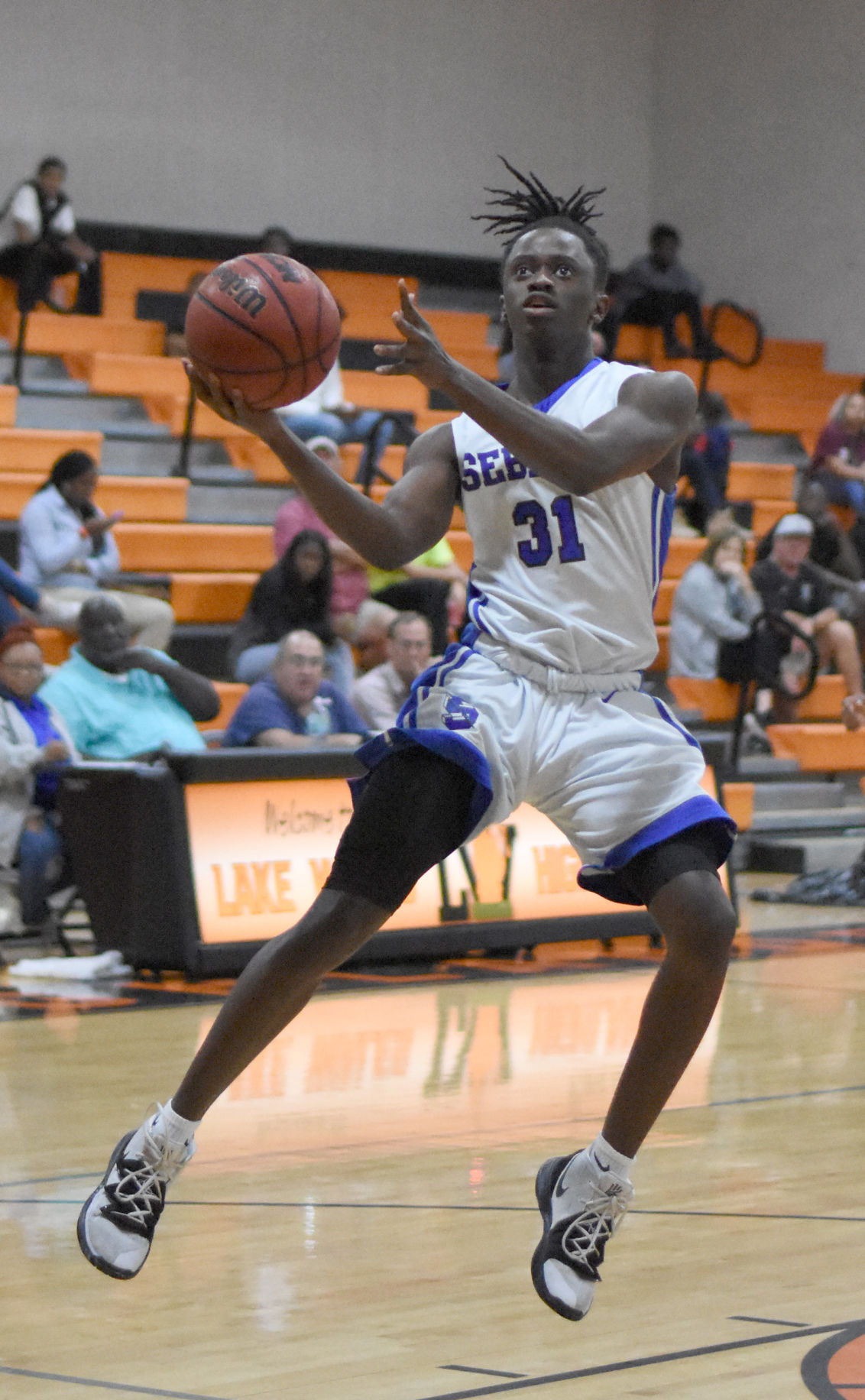 Sebring’s Will Desources (31) jumped around defenders for a basket against Lake Region. 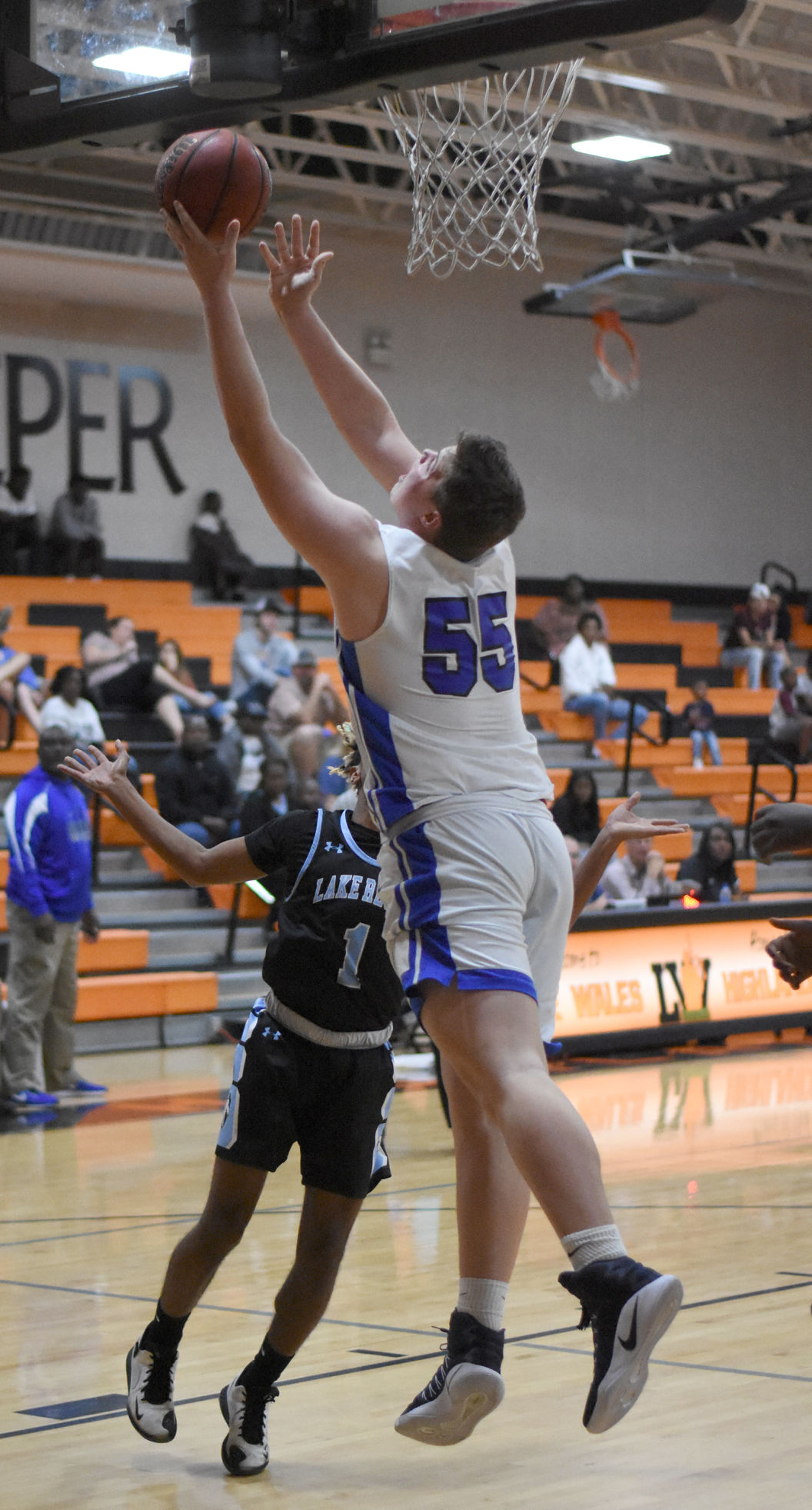 Tavion Coston (33) made an easy lay Tuesday night for the Blue Streaks.

Sebring’s Ryan Brown (22) made a shot over his shoulder during Tuesday night’s District Semifinal game against Lake Region.

Sebring’s Will Desources (31) jumped around defenders for a basket against Lake Region.

Tavion Coston (33) made an easy lay Tuesday night for the Blue Streaks.

LAKE WALES — The Sebring Blue Streaks competed in the Class 5A-District 7 Tournament Tuesday night against the Lake Region Thunder. The Blue Streaks dominated and knocked the Thunder out of the competition with a final score of 80-56. Sebring’s record increased to 17-6 for the season and the Blue Streaks remain undefeated in district play with a record of 4-0.

“It was a total team effort,” said Sebring coach Princeton Harris. “We played really well as a team tonight and looked good. They went out and executed what we wanted them to. It is a humbling experience to get this win and to know we are moving on. They all played well and that is what we look for this late in the season. We told them ‘have fun, if you don’t do anything else, make sure you have fun’. If they have fun then they are relaxed and it becomes easier for them to play.”

In the first period, the Blue Steaks jumped into an early lead with Ryan Brown sinking a pair of 3-pointers and adding a basket. Alvin Tumblin and Tavion Coston each contributed a pair of buckets and Eric Brown netted a 3-pointer. At the end of the first quarter the Blue Streaks had a 21-13 lead.

The Thunder continued to trail in the second period and scored just 12 points. Tumblin led the Blue Streaks with four baskets and three free throws. Ryan Brown added three buckets. Sebring’s Mike Sholtz netted a 3-pointer and added a couple of shots. Sebring had a commanding 21-point lead going into halftime with a score of 46-25.

“We played well tonight,” said Alvin Tumblin. “We really want to win the District Championship. I think I did well tonight. We need to work on playing both sides of the ball. We are going to work on a few things in practice to get ready for Friday and hopefully come out with the win. Our goal is to make it to the State Finals.”

In the third period the Blue Streaks maintained control with Sholtz leading Sebring with two jump-shots, a free throw and a three. Ryan Brown, Eric Brown, Marshal O’Hern, Will Desources, Coston and Tumblin each made a basket for Sebring. Ryan Brown also added three free throws, Eric Brown netted two free throws and Tumblin contributed a pair of foul shots pushing Sebring into an overwhelming 74-39 lead at the end of the third.

Sebring brought in their backup players in the fourth allowing Lake Region to narrow the deficit. The Thunder outscored Sebring 17-6. Sebring’s Ryan Brown netted a 3-pointer for half the Blue Streaks’ points in the quarter. Coston made a basket and Bo Riley made one of two free throws. Sebring held off the Thunder and clinched their spot in the Class 5A-District 7 Championship with a final score of 80-56.

“We are going to prepare for Friday night and hopefully bring home another District Championship,” said Harris. “We are going to do what we usually do to get ready for Friday. We just have to work and get the job done. If we work on our defense and our offense then everything else will fall into place for us.”

The Sebring Blue Streaks will take on the Auburndale Bloodhounds on Friday in the District Championship in Lake Wales. Tip-off is set for 7:30 p.m.