You are the owner of this article.
Edit Article Add New Article
You have permission to edit this article.
Edit
Login
I want to
Publications
News
Business
News Archives
Classifieds
Obituaries
Sports
Events
Featured Sections
Viewpoint
Announcements
Subscribe
E-Paper
Public Notices
Contact Us
Share This
1 of 9

The Sebring Blue Streaks are the Class 4A-District 11 Champions after defeating Hardee. 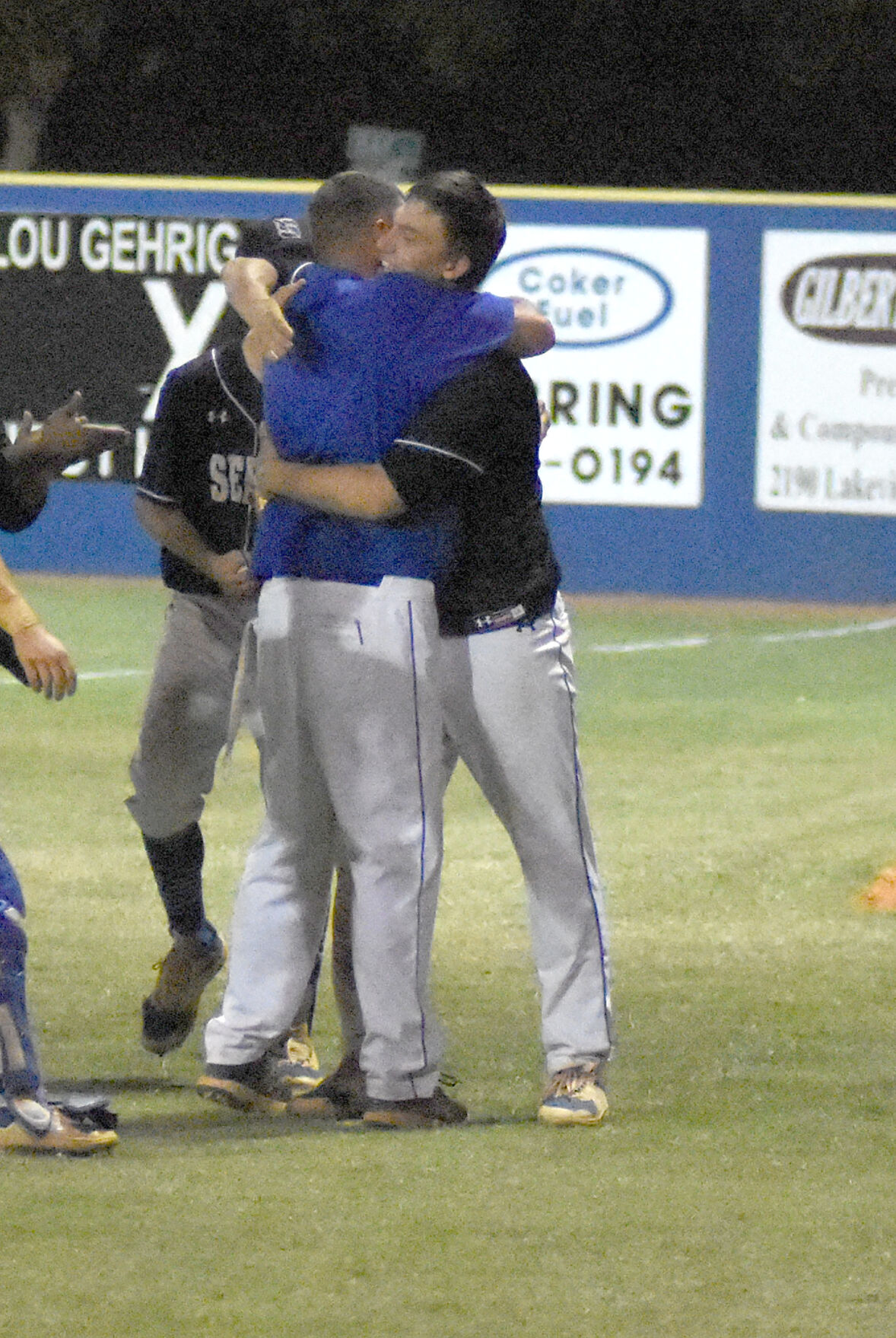 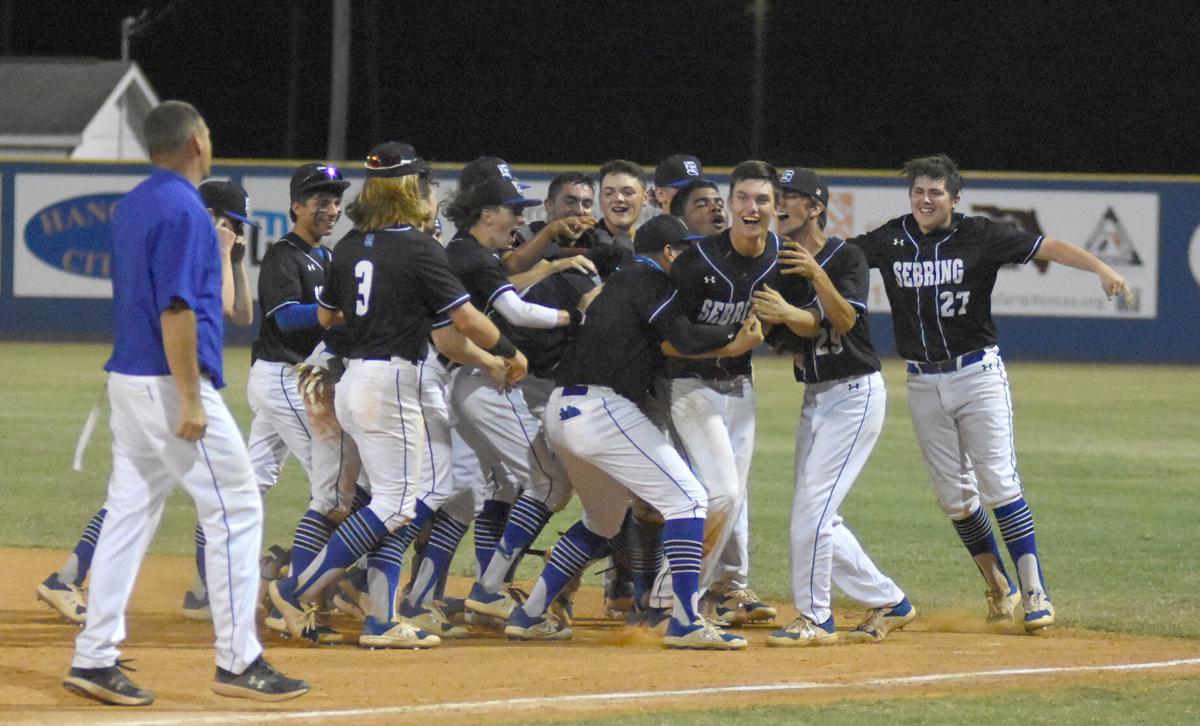 Rhett Vaughn was mobbed by his teammates after hitting the game winning RBI Thursday night. 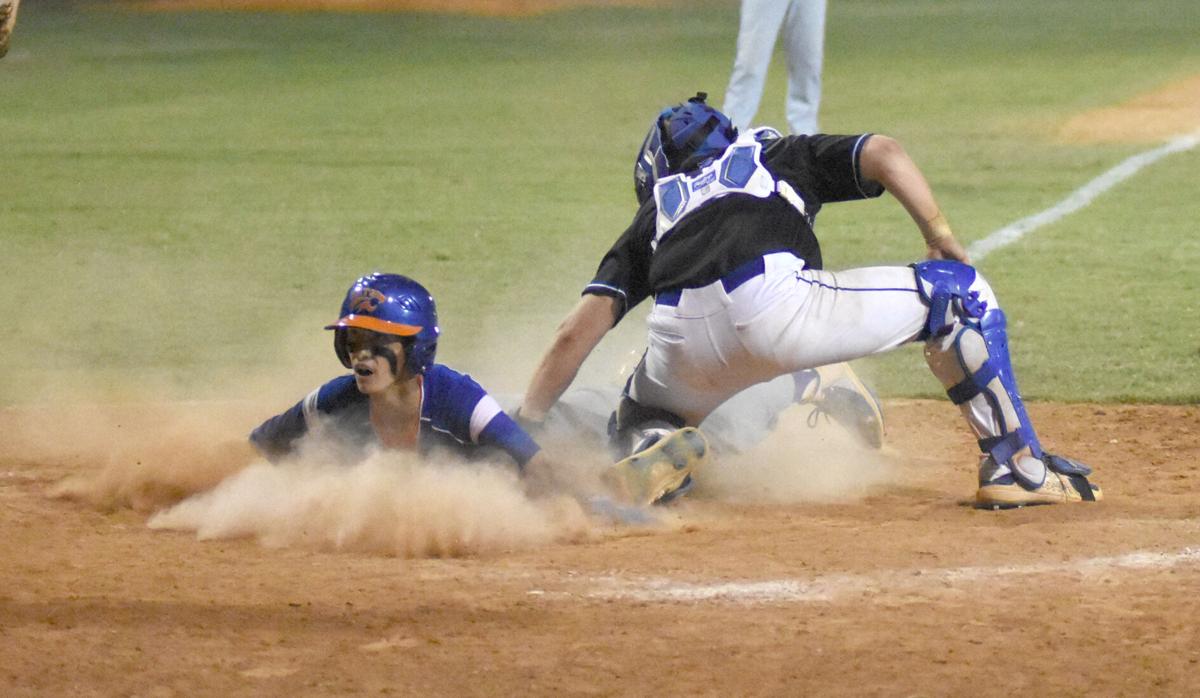 Sebring’s catcher Case McClelland made the play at the plate tagging out Hardee’s Dawson Hanchey. 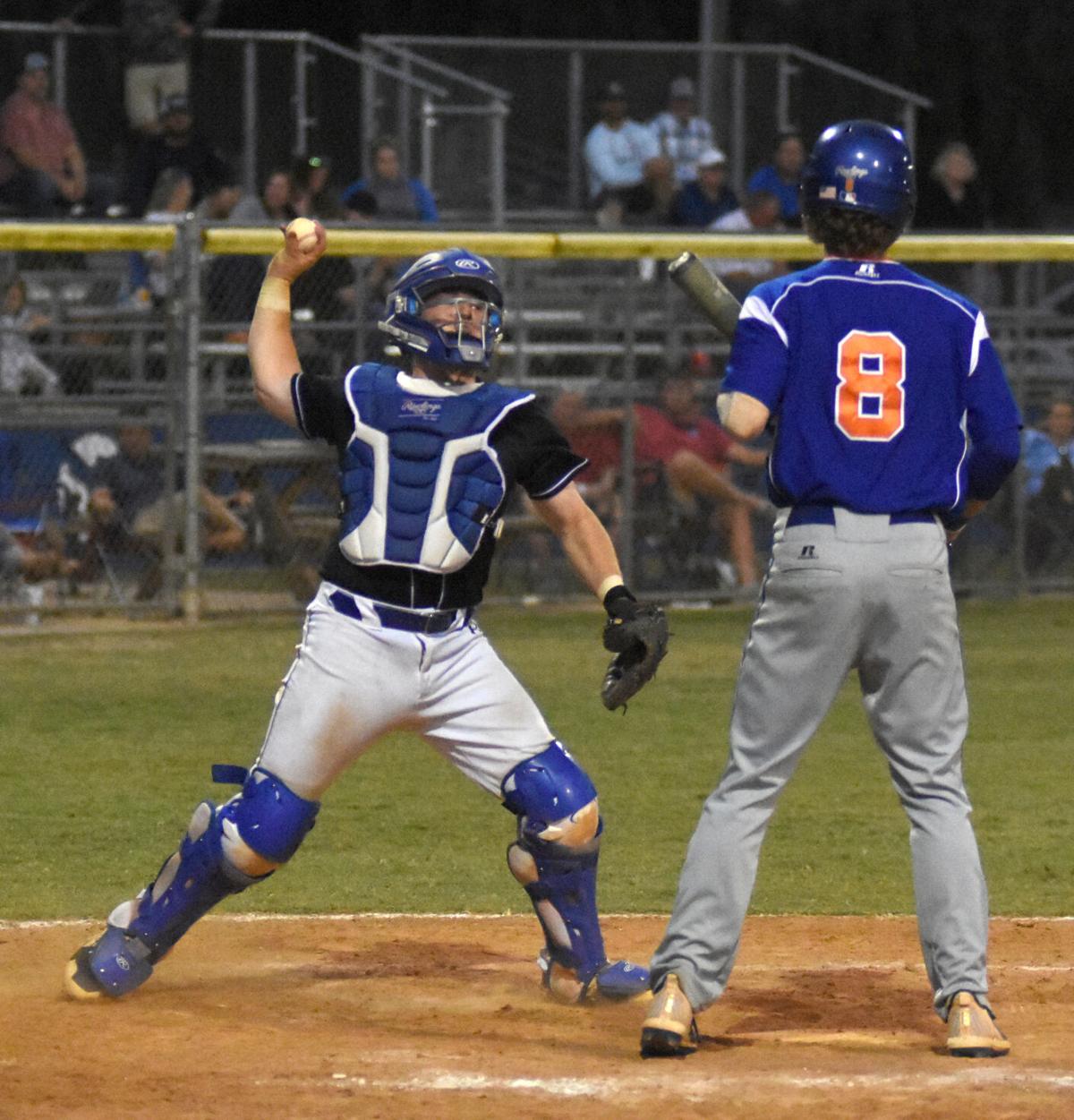 Sebring’s Case McClelland threw down to first to pickoff Hardee’s runner for an out during Thursday night’s championship game. 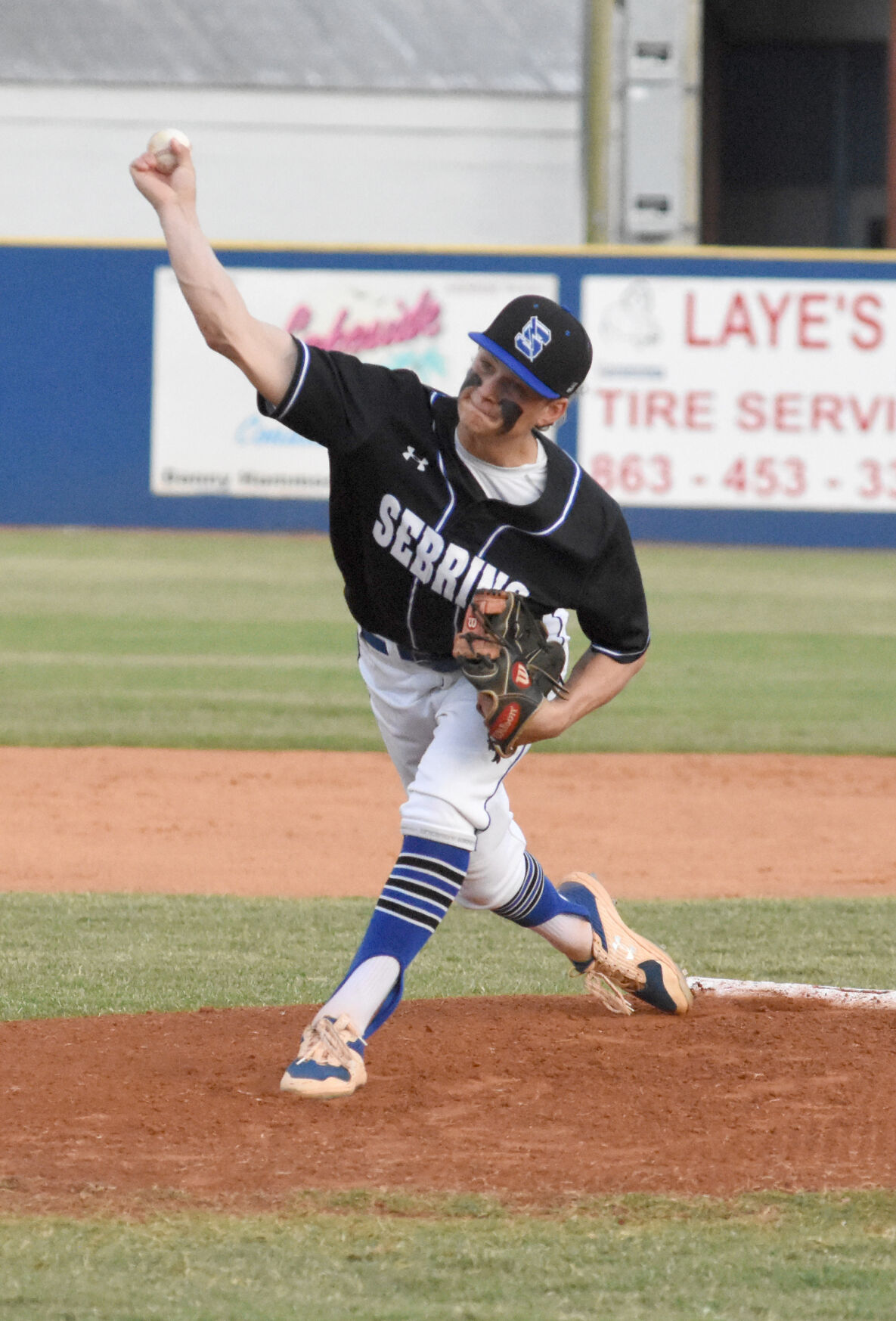 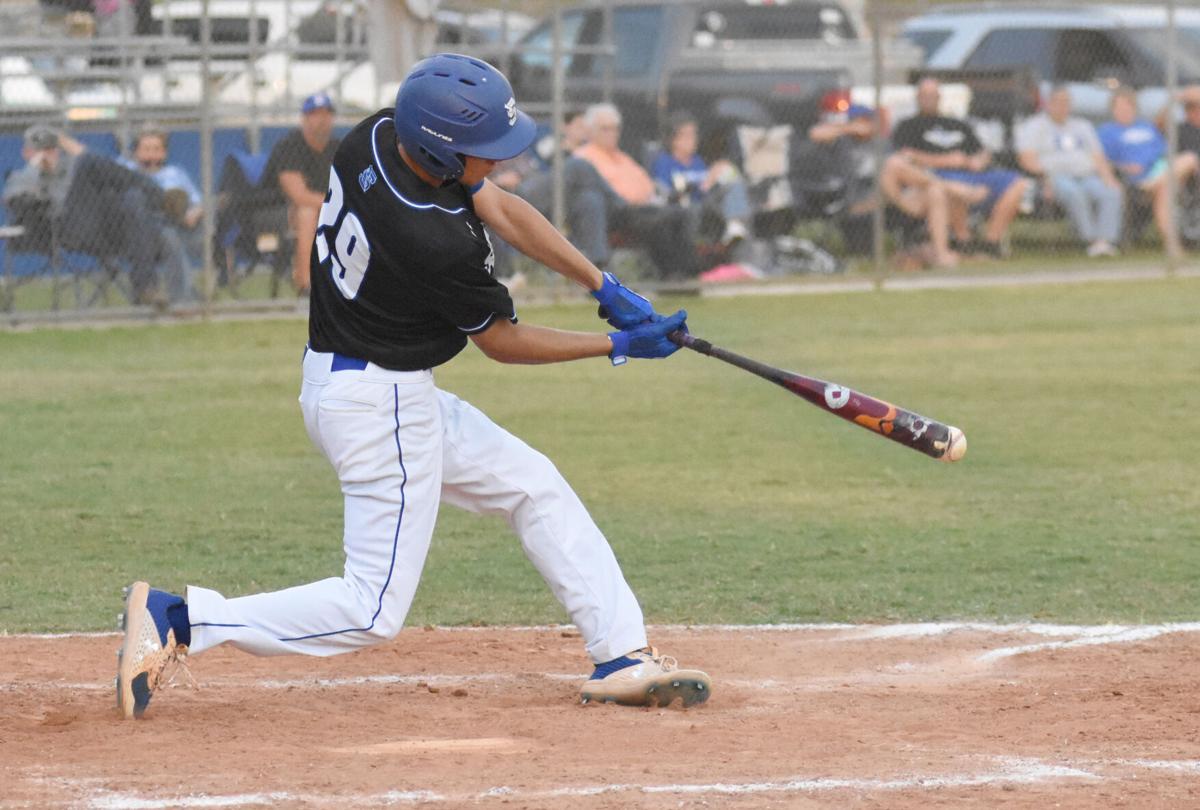 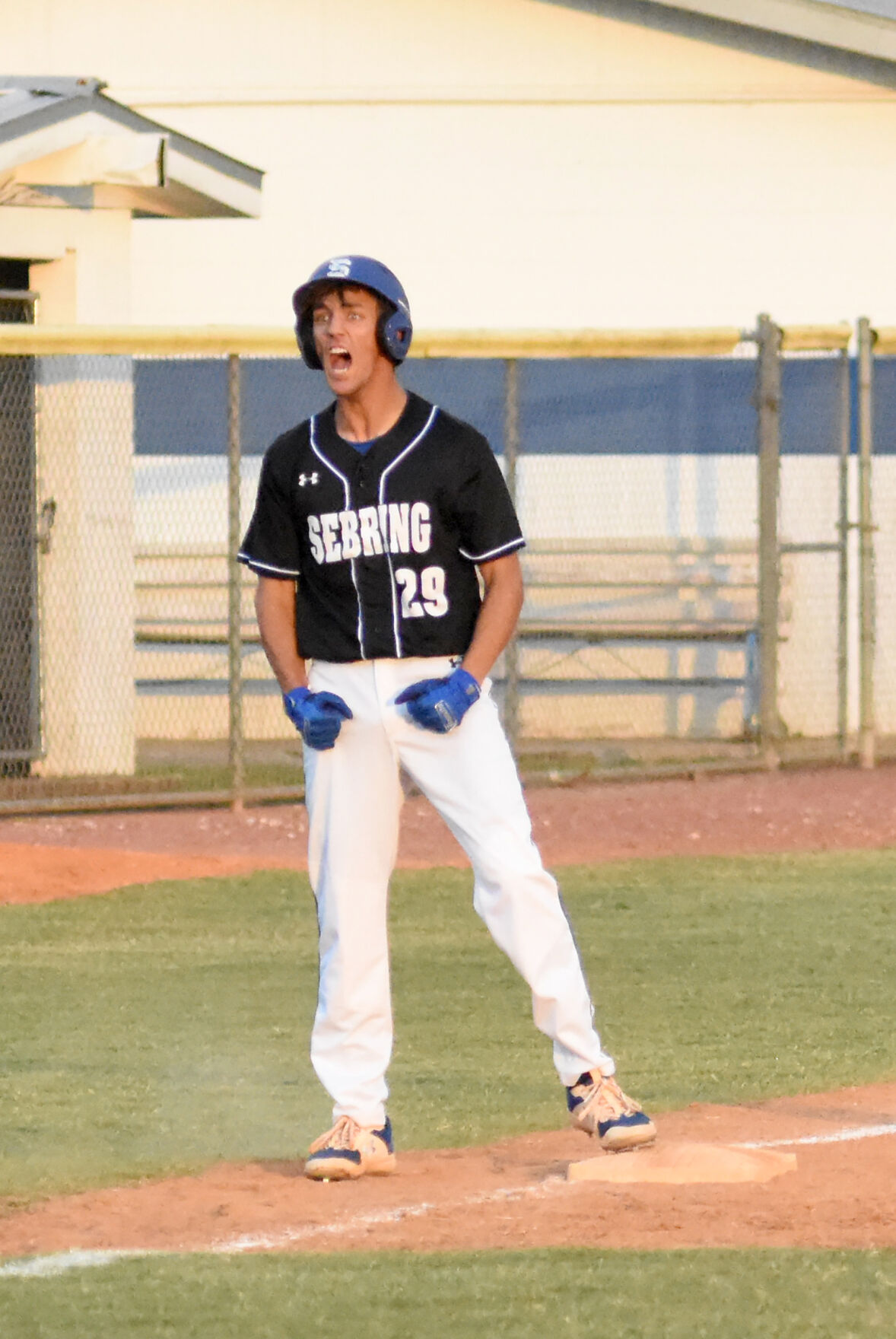 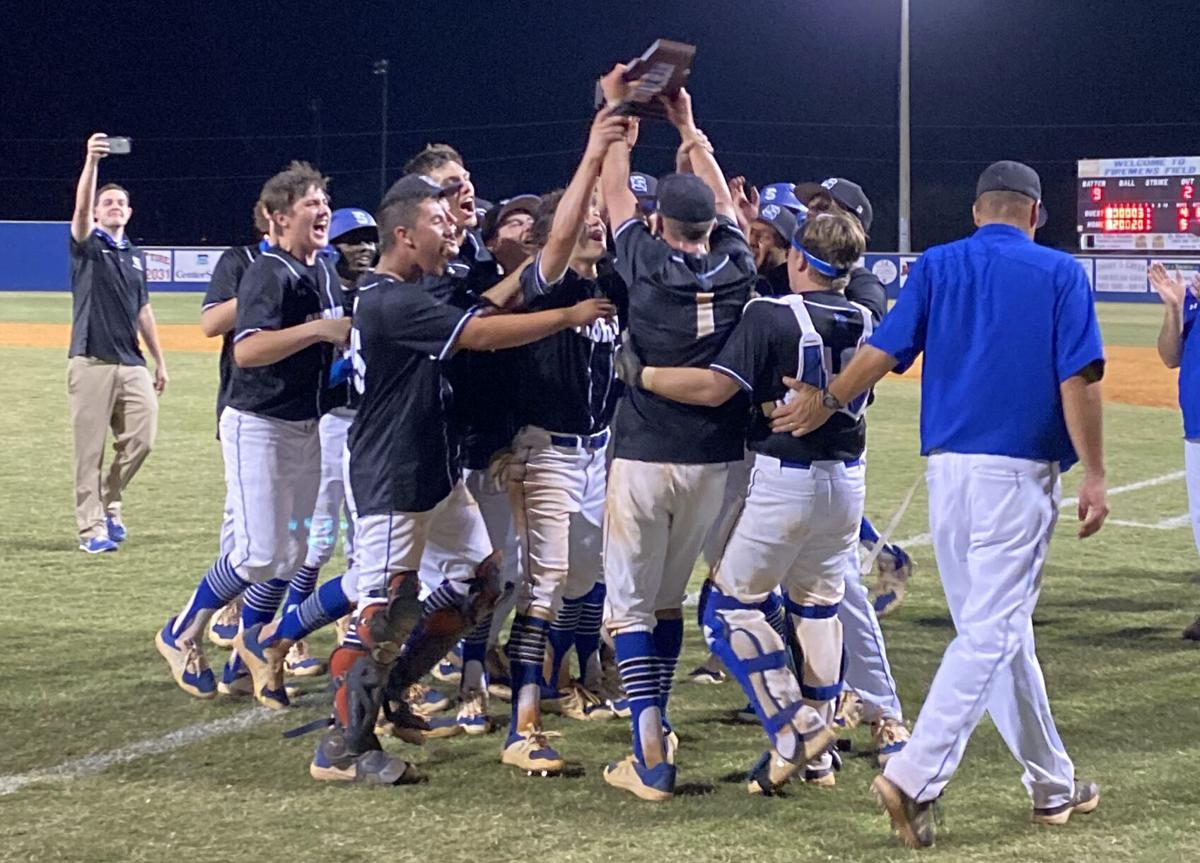 The Sebring Blue Streaks are the Class 4A-District 11 Champions after defeating Hardee.

Rhett Vaughn was mobbed by his teammates after hitting the game winning RBI Thursday night.

Sebring’s catcher Case McClelland made the play at the plate tagging out Hardee’s Dawson Hanchey.

Sebring’s Case McClelland threw down to first to pickoff Hardee’s runner for an out during Thursday night’s championship game.

Rhett Vaughn screamed all the way down the first base line as soon as he made contact with the first pitch he saw in the seventh inning. He now has as many game-winning postseason hits as he does postseason games.

“I’m so happy for these guys,” Sebring Coach Jasone DeWitt said. “To see the work and effort that they put in. Some of it had to be on their own just because of some restrictions we had in the fall, not being able to get into a couple areas, and they went and did it on their own. It shows their character, it shows their dedication to our program and I’m just happy for these guys.”

Vaughn’s heroics didn’t start in the seventh. In the second, Sebring starter Cameron Kimbrell gave up a leadoff single to Hardee’s Alex Solis. He advanced to second on a wild pitch and a single by Casen Gough gave him an opportunity to take home.

A hard-charging Vaughn fielded the line drive off the ground and turned in a throw to home to cut down Solis at the plate, keeping the Wildcats off the board.

Sebring drew first blood in the bottom of the second inning. A pair of singles by Cameron Kimbrell and Vaughn set the table for Zach Doorlag who rocketed the ball to right-centerfield for a triple and a 2-0 Blue Streak lead.

The Blue Streaks built on their lead in the fifth. A leadoff double by Trey Bender got it started, he scored on a hit by Case McClelland and a misplay in the outfield. Whitehouse moved McClelland’s courtesy runner, Peyton Spencer, over on a bunt. Trey Rowe pulled a pitch into right field to score Spencer furthering Sebring’s lead to 4-0.

Then Sebring ran into trouble.

After a line out to Joey Warner in the sixth, a hard-hit ground ball by Wildcat’s Palmer Klein to second base allowed him to reach. Solis doubled on the first pitch to score Klein to make it 4-1.

Kimbrell forced an 0-2 ground ball by Jacen Bryan to the third baseman Whitehouse. What would’ve been an easy out ended up as an airmail throw and gave the Wildcats runners on second and third with one out.

A ground ball by Hardee’s Dawson Hanchey then ate up Bender at first and Solis scored. Gough scored Bryan and, all of a sudden, the Streaks lead went from 4-0 to 4-3 with the tying run in Hanchey at third. Hardee laid down a squeeze bunt but a slick flip from Kimbrell to McClelland caught Hanchey at home.

DeWitt called those miscues in the sixth uncharacteristic. After the first one it just kind of snowballed, especially the missed throw by Whitehouse.

Sebring wasn’t out of it yet as a walk loaded the bases for Hardee with leadoff hitter Kellon Lindsey at the plate. Kimbrell shored up though as he got Lindsey looking on four pitches to end the half inning and preserving the lead for the Blue Streaks.

“He’s (Kimbrell) been a bulldog all year for us,” DeWitt said. “This is what he does. He pitches and he grinds and he doesn’t show emotion. He doesn’t get rattled very easy. He’s a guy that’s a utility player. He’s the quarterback of the football team so he’s always under pressure. For me, I knew he would be cool headed.”

In hindsight, DeWitt said he probably should’ve pulled Kimbrell after that inning. However, after a 1-2-3 the bottom of the sixth, DeWitt went with his gut and let him go back out for the seventh.

Kimbrell gave up a leadoff walk on five pitches and after the first ball to Klein, DeWitt pulled the right-hander for Ashton “Blueberry” Griffin.

With Griffin in for Sebring, Hardee’s Klein reached on a bunt single. Then he spiked a pitch and the runners moved up. A ground ball by Solis on the ninth pitch of his at-bat. Whitehouse immediately went home but the throw was a little low and McClelland couldn’t hold on. Hardee tied the game 4-4.

Griffin forced a pop out to right where Doorlag sprinted all the way from his center field position to make the grab, but the highlight of the night on defense came that next batter.

Hanchey rocketed a ground ball up the middle. Warner ranged to his left from shortstop and made a diving stop. The rest was like an action sequence.

Glove flip to Benny Bikar Jr., a spin, throw to first for a double play by the Blue Streaks.

The Sebring dugout exploded out with excitement, rushing onto the field celebrating the inning-ending spectacle.

“You would have thought that we won the game right there,” DeWitt said.

Warner said he’d never made a glove flip double play before but he and Beny Bikar Jr. made sure they were ready to turn it.

Warner and DeWitt praised Griffin for coming through in a clutch situation on the mound. He came in, threw strikes and kept his team in it.

“(He’s) a guy who didn’t get a lot of innings for us this year,” DeWitt said. “Watching him around school (Thursday), first time I saw him, I felt like he was going to be our closer today.”

Griffin’s performance and the walk-off earned him his first postseason win according to DeWitt.

Vaughn said the double play lit a fire. Warner said it might’ve given them a little juice but the team knew it needed hits in the bottom of the inning regardless of the double play.

McClelland led off the inning with a smoked ground ball to shortstop, who made a great play and threw out the catcher at first.

Whitehouse then drew a walk on four pitches and Rowe was hit by a pitch. Sebring had two runners on with one out. Kimbrell then moved Whitehouse’s courtesy runner, Freddie Perez, over to third on a fielder’s choice.

Vaughn jumped on the first pitch he saw: An inside fastball from Hanchey driven to left field to score Perez and make his team the District 11 Champions.

“I’m just glad our team kept us in the game long enough to give me an opportunity to go up to bat and give me that,” Vaughn said.

The Blue Streaks now take on Lemon Bay in the Class 4A-Region 3 Quarterfinals.

For DeWitt, it’s huge to host a regional game at home.

“You don’t have to get on the bus, you don’t have to travel,” DeWitt said. “You get to have an opportunity to have a great set of fans here, you get to play on your home field and it’s big to last the at-bat.”

Obviously, that came in handy Thursday night. For now, DeWitt said they’ll enjoy the win a little longer than normal and Warner agreed.

“I really wanted that district championship. That felt good,” DeWitt said. “I think it felt good for everyone, especially Rhett, with that walk off.”

He knows Sebring will need to be ready and focused when the Streaks get back at it.

“Take it one step at a time. Ready for the next game,” he said.