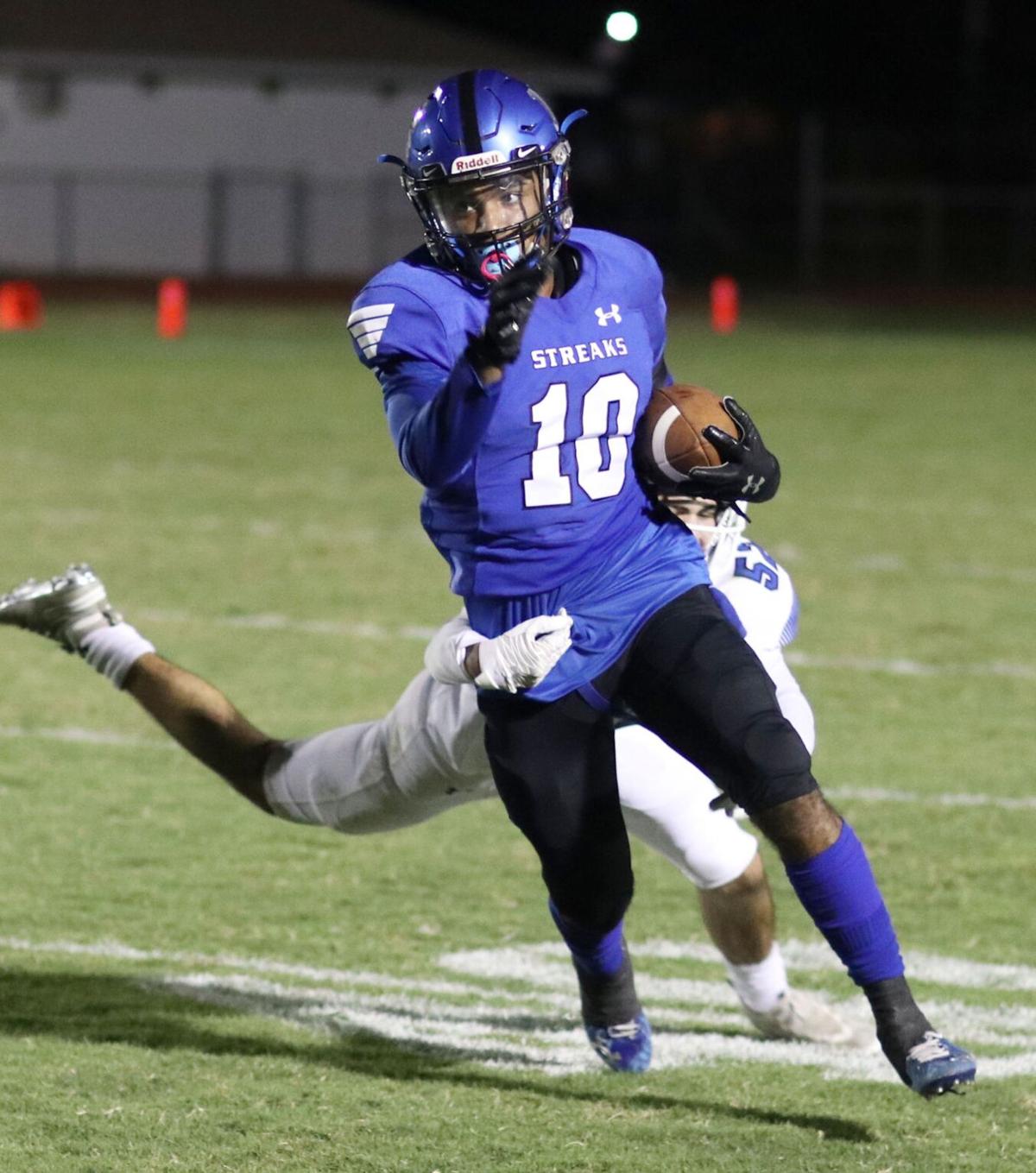 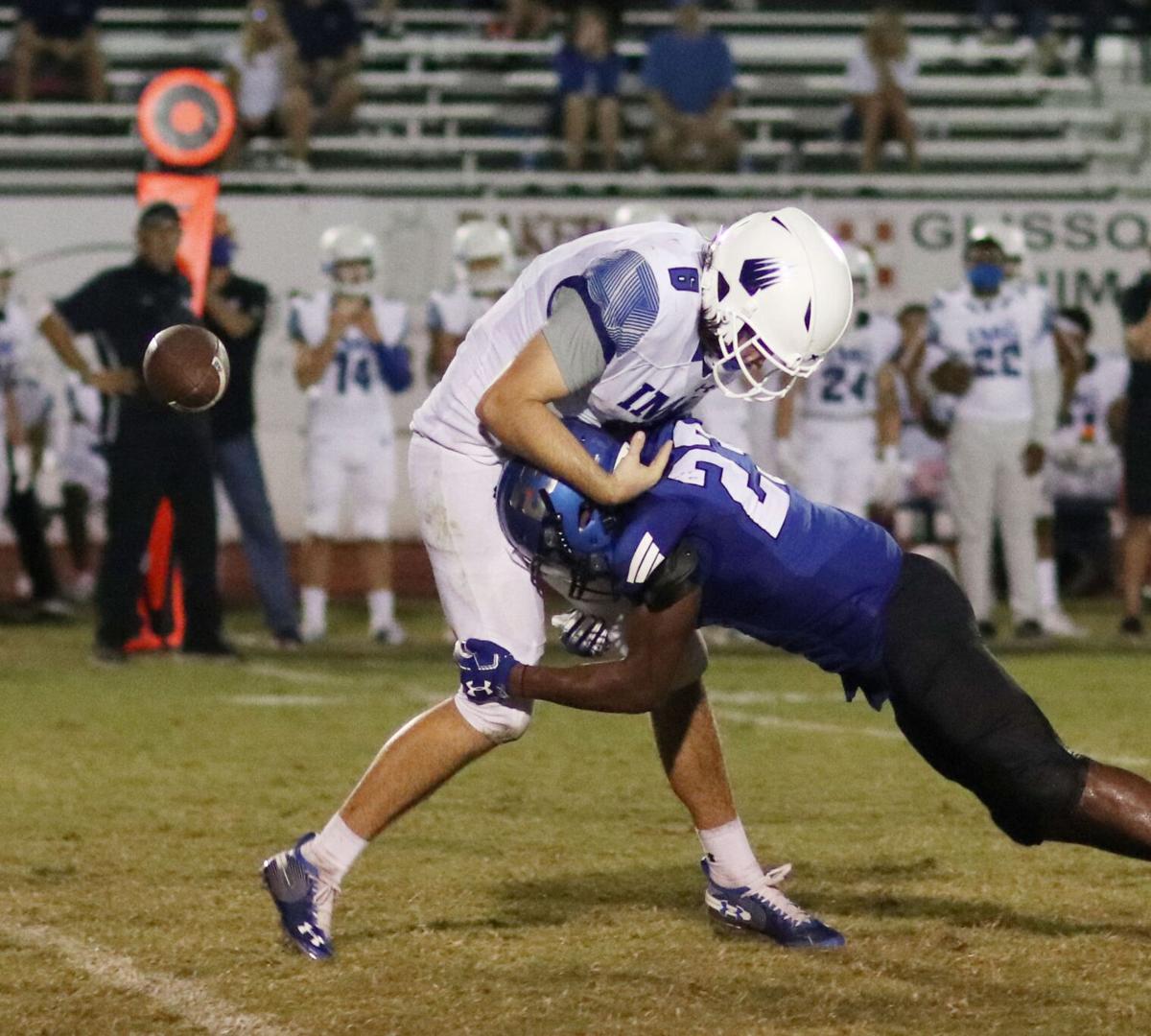 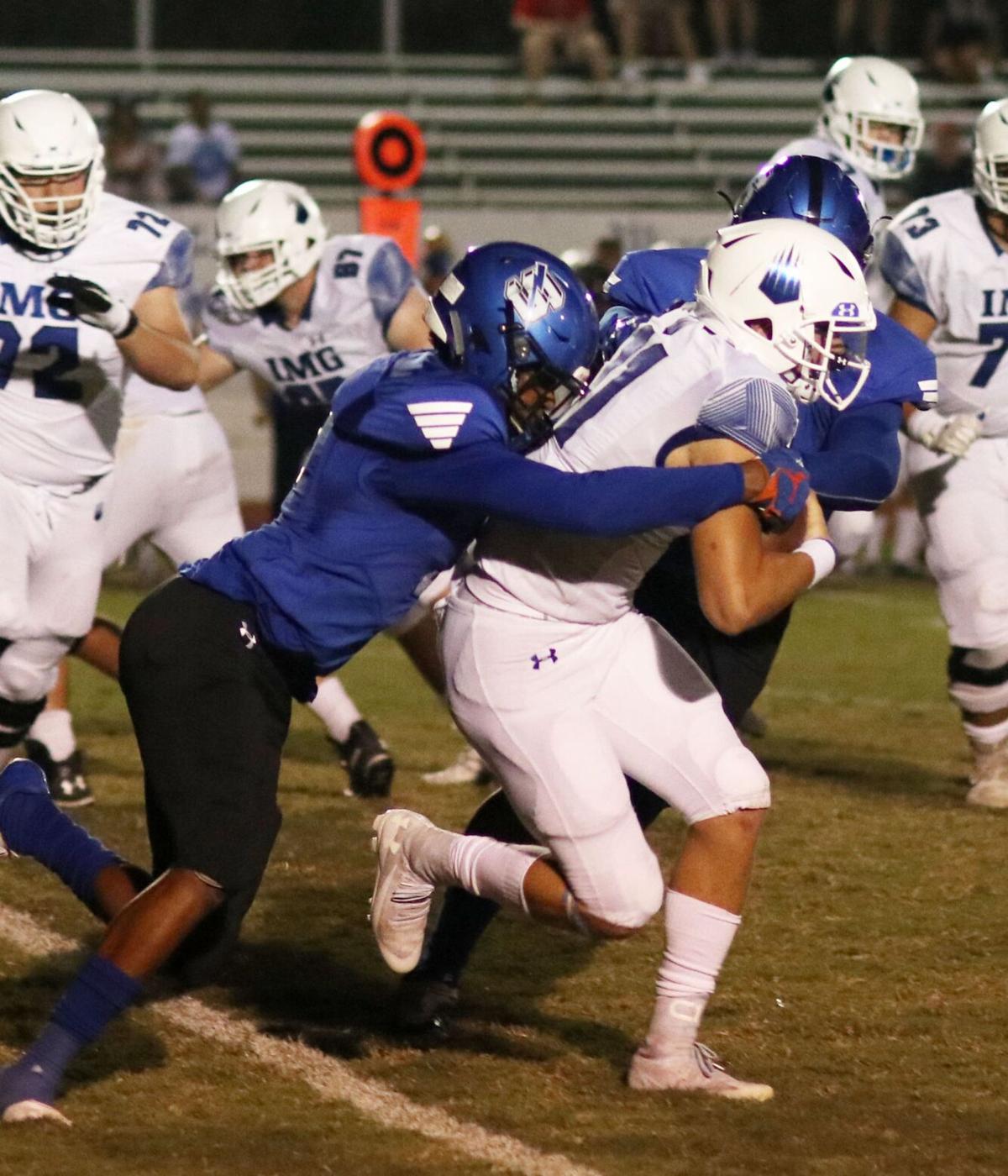 Sebring’s Emmitt Beck (3) catches IMG quarterback Tyler Ross from behind for a loss as Sebring’s Quentin Joyner (99) closes in from the side. 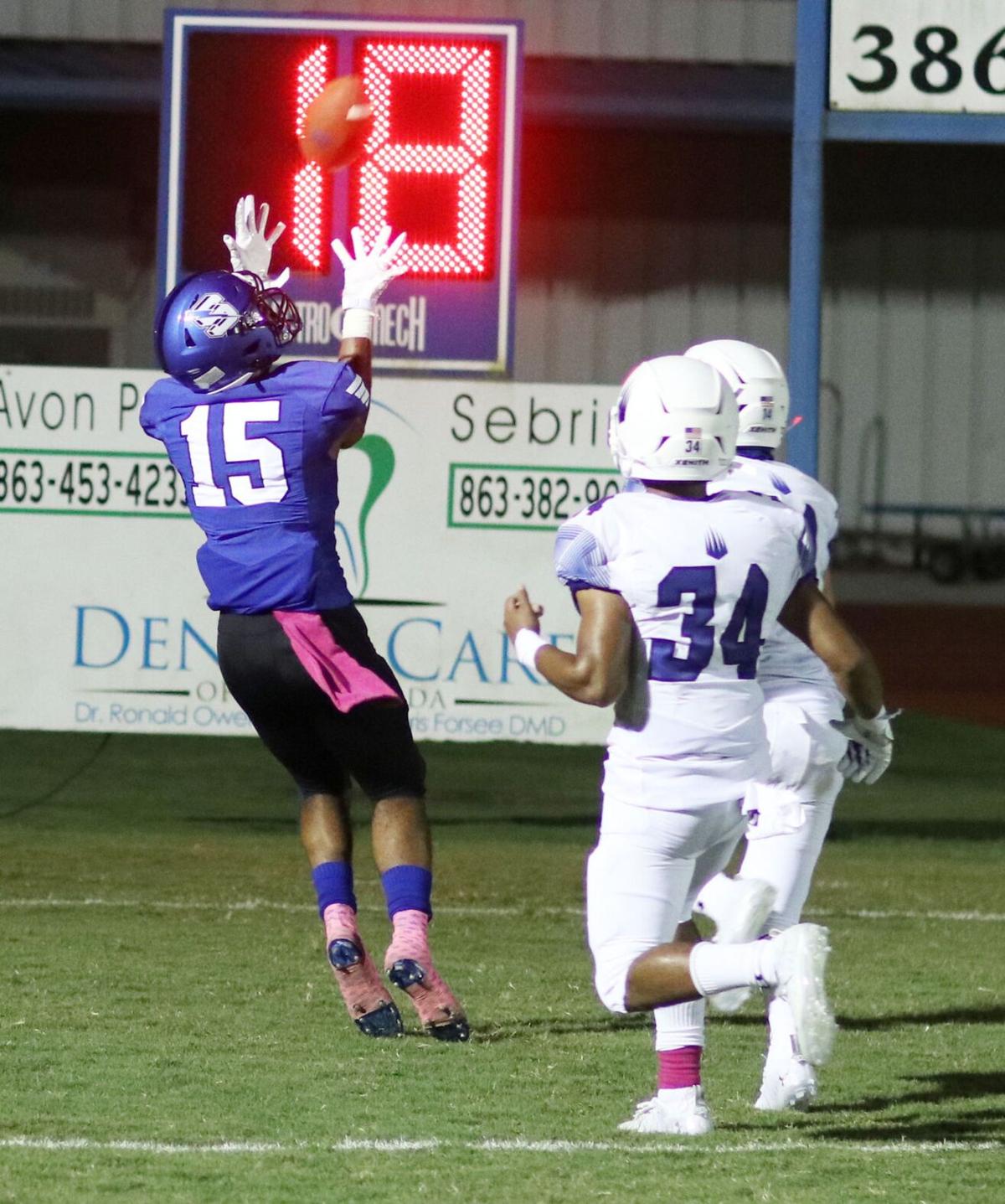 Sebring’s Emmitt Beck (3) catches IMG quarterback Tyler Ross from behind for a loss as Sebring’s Quentin Joyner (99) closes in from the side.

SEBRING – The Sebring Blue Streaks rolled to their fifth straight win with an impressive 44-14 win over the IMG White team. The win also improves the Blues Streaks to 5-0 on the season while IMG dropped to 3-3.

With the exception of a few players falling and tripping over each other as they exited to the field from the Blue Streak tunnel, the Blue Streaks hit IMG fast and hard while taking advantage of IMG mistakes to take a 16-0 first quarter lead.

Before the season, Sebring Head Coach LaVaar Scott talked about his players had to grow up fast.

“There is no doubt they are progressing well,” said Scott. “We are playing seven or eight freshman. They are still making some mistakes and some are growing up faster than we wanted. Hopefully we will be back up to full strength for next week.”

Getting the ball first, IMG attempted a squib kick that Sebring recovered at their own 47. From there, it only took seven plays for Sebring to take an early lead. Highlighted by a 17-yard run by Jabari Knighten to start the game and a 25-yard pass from Cam Kimbrall to Ryan Brown. Knighten capped off the drive with an 8-yard touchdown run around the left side. With the extra-point by Jean Carlos Sanchez, Serbring held an early 7-0 lead.

Sebring’s increased to 9-0 on IMG’s first possession when they attempted to punt from their own 11 and snapped the ball out of the back of the end zone for a safety.

The Blue Streaks got the ball back on IMG’s 44 after the kickoff. Three plays later Kimbrall connected with Jaray Harrison for a 30-yard touchdown pass as Harrison got behind two IMG defenders down the left side to catch the pass in the end zone.

With the extra point, Sebring’s lead swelled to 16-0 with 7:16 still left in the first quarter.

IMG tighten up as they put together a 70-yard drive to start the second quarter that ended with IMG scoring with 8:00 left in the half on an 8-yard run by Demitrias Fletcher to cut Sebring’s lead back to single digits at 16-7.

As it appeared that would be the score as both defenses took charge, IMG muffed the snap for the second time, this time allowing Sebring to get the ball on IMG’s 11 yard line with 38 seconds left in the half.

Time would not be a factor as Knighten scored his second touchdown of the game on the first play with a sweep to the left side that gave the Blue Streaks a 24-7 lead at the half.

Sebring’s special teams got involved early in the second half. Forcing IMG to punt deep in their own territory on their first drive, Sebring’s DJ Balfour was able to block the punt and the Blue Streaks recovered on IMG’s 2-yard line.

Fred Hankerson made short work of the short field with a 2yard touchdown run up the middle as Sebring now possessed a 31-7 lead.

Sebring would benefit with excellent field position again late in the third quarter when Eli Bertrand sacked and dislodged the ball from IMG quarterback Joe Borchers while recovering the fumble on IMG’s 28 that was later pushed back to the 39 due to a penalty.

The Blue Streaks gave IMG a steady diet of Hankerson, six straight runs, the first up the middle for 24 and the last yard touchdown run that gave the Blue Streaks a 37-7 lead going into the final quarter.

Each team added a touchdown in the fourth quarter, Sebring on a 46-yard deep throw from Cambrill to Kavontae Jones down the right sideline and IMG scored late on a 14-yard run by Tyler Ross to make the final score 44-14.

Hankerson led the Blue Streaks with a game high 81 yards on 15 carries for 2 touchdowns and Kimbrall completed 5 of 9 passes for 114 yards and 2 touchdowns.

“We still have things to work on,” noted Scott. “We are going to look at the film about the penalties and pass protection.”

Though Scott added that his quarterback had some young moments, leaving the pocket too fast and not letting the play develop, but was not overly concerned about it as it has more to do with experience.

The Blue Streaks will be home again this Friday against Lake Wales.