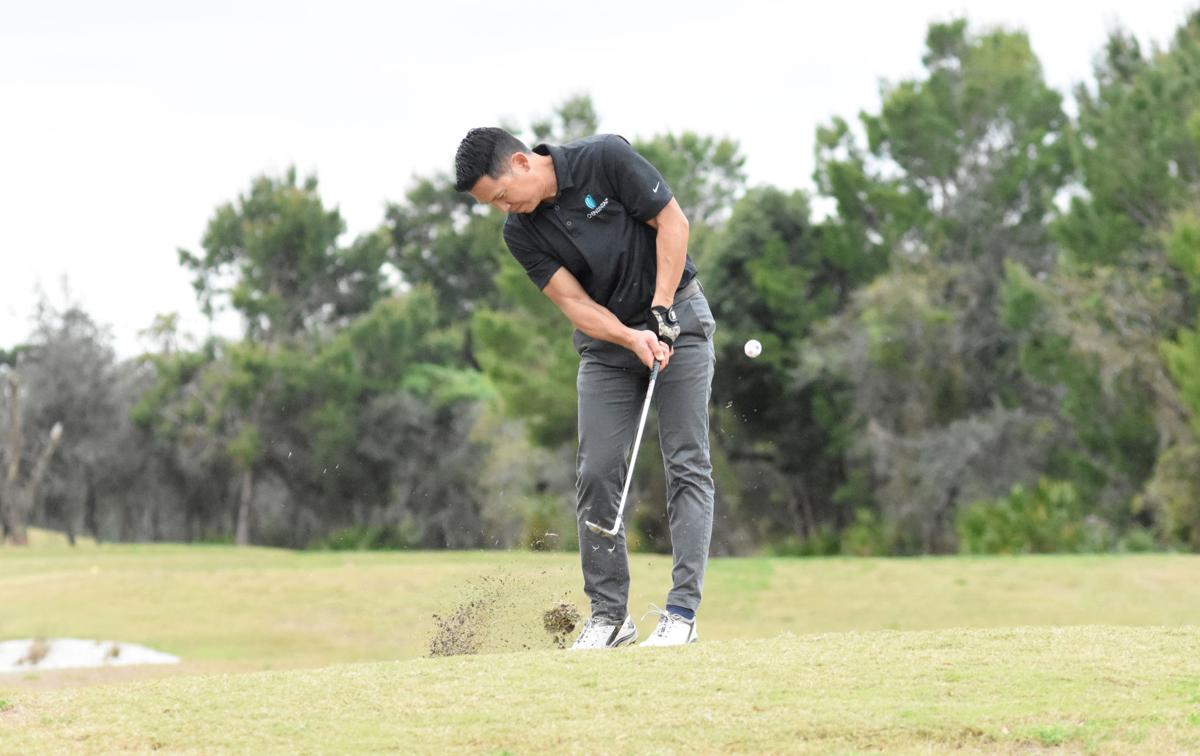 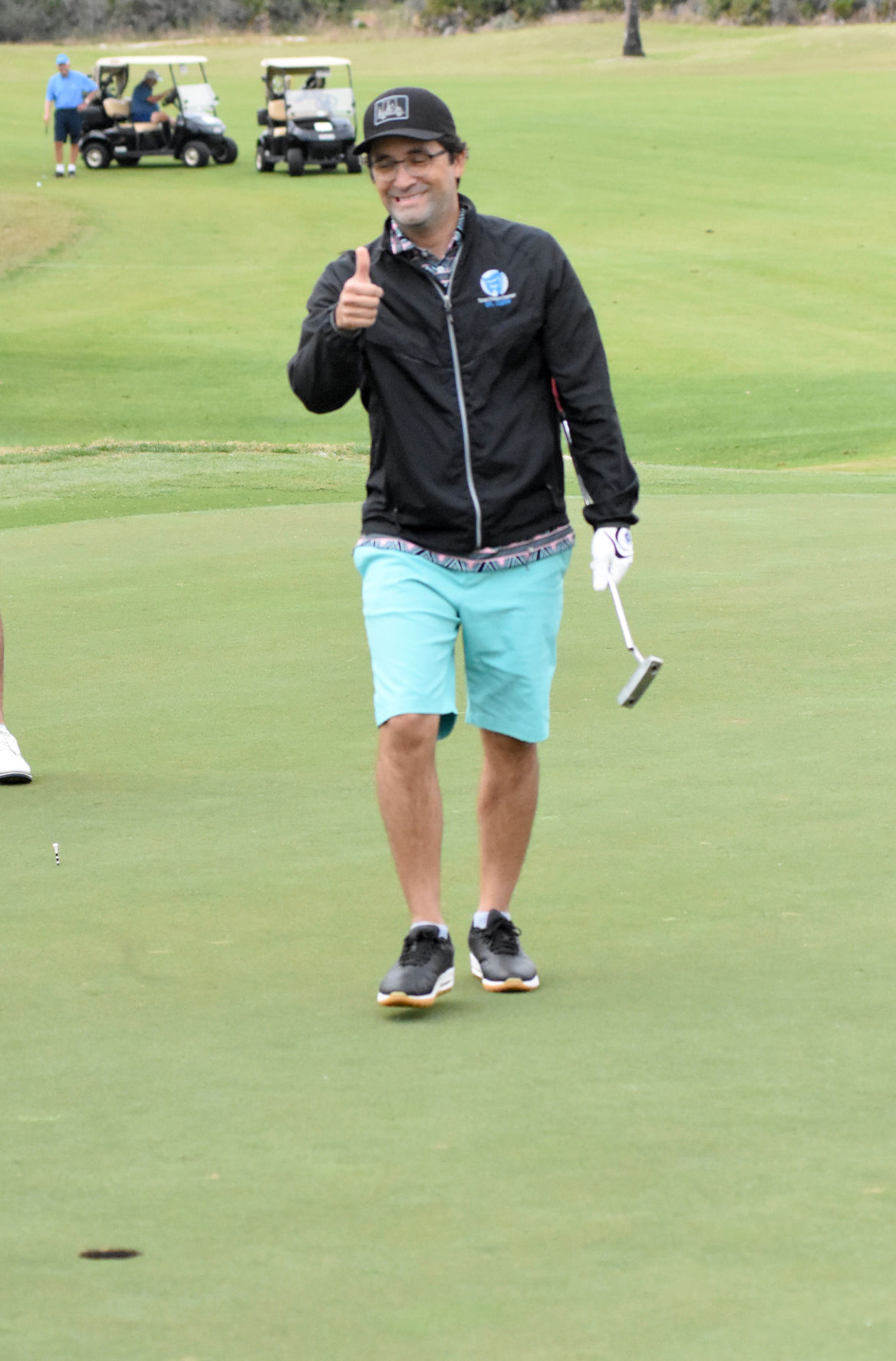 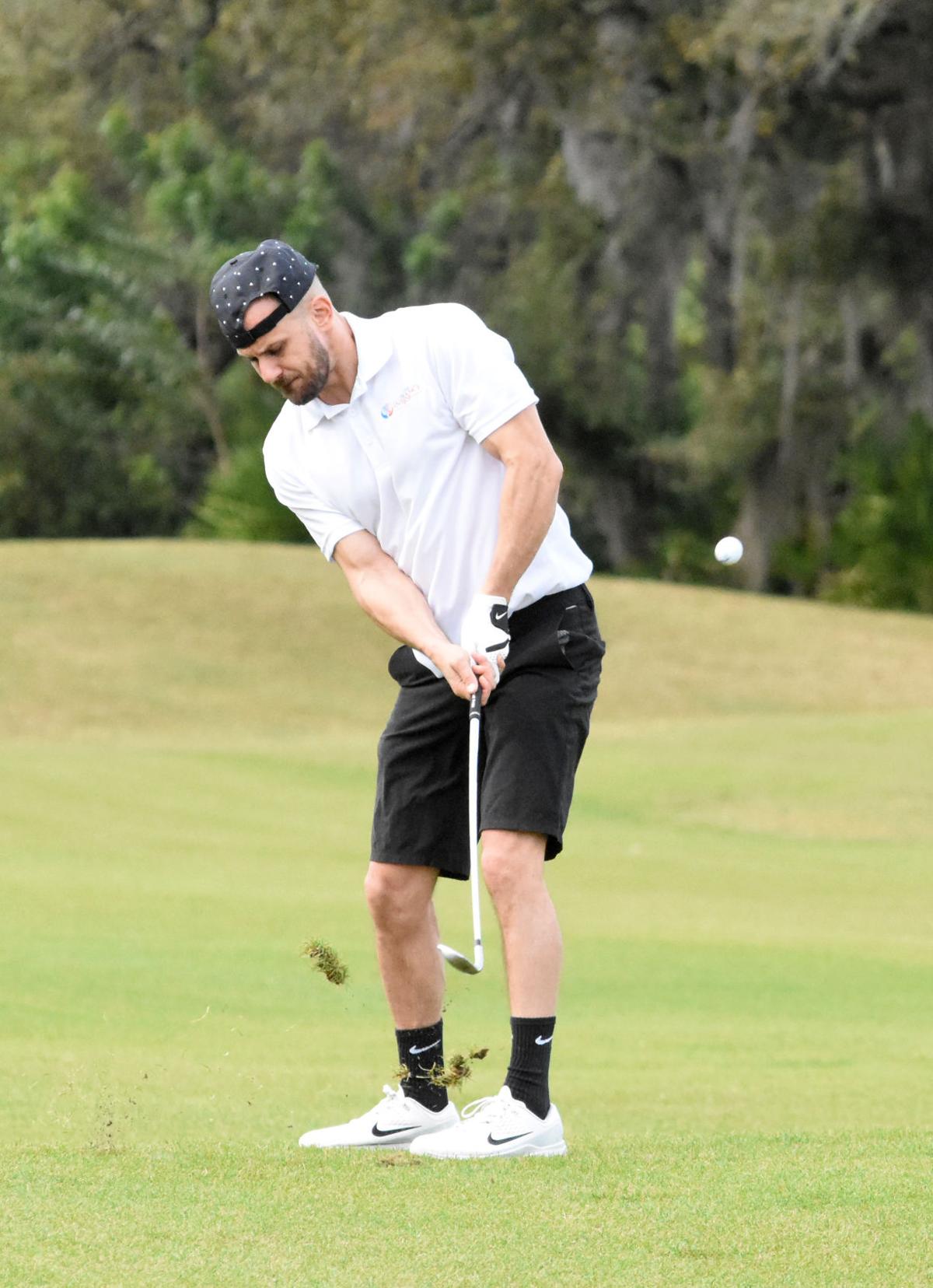 Brett Gizelt chipped his way toward the pin during Saturday’s tournament. 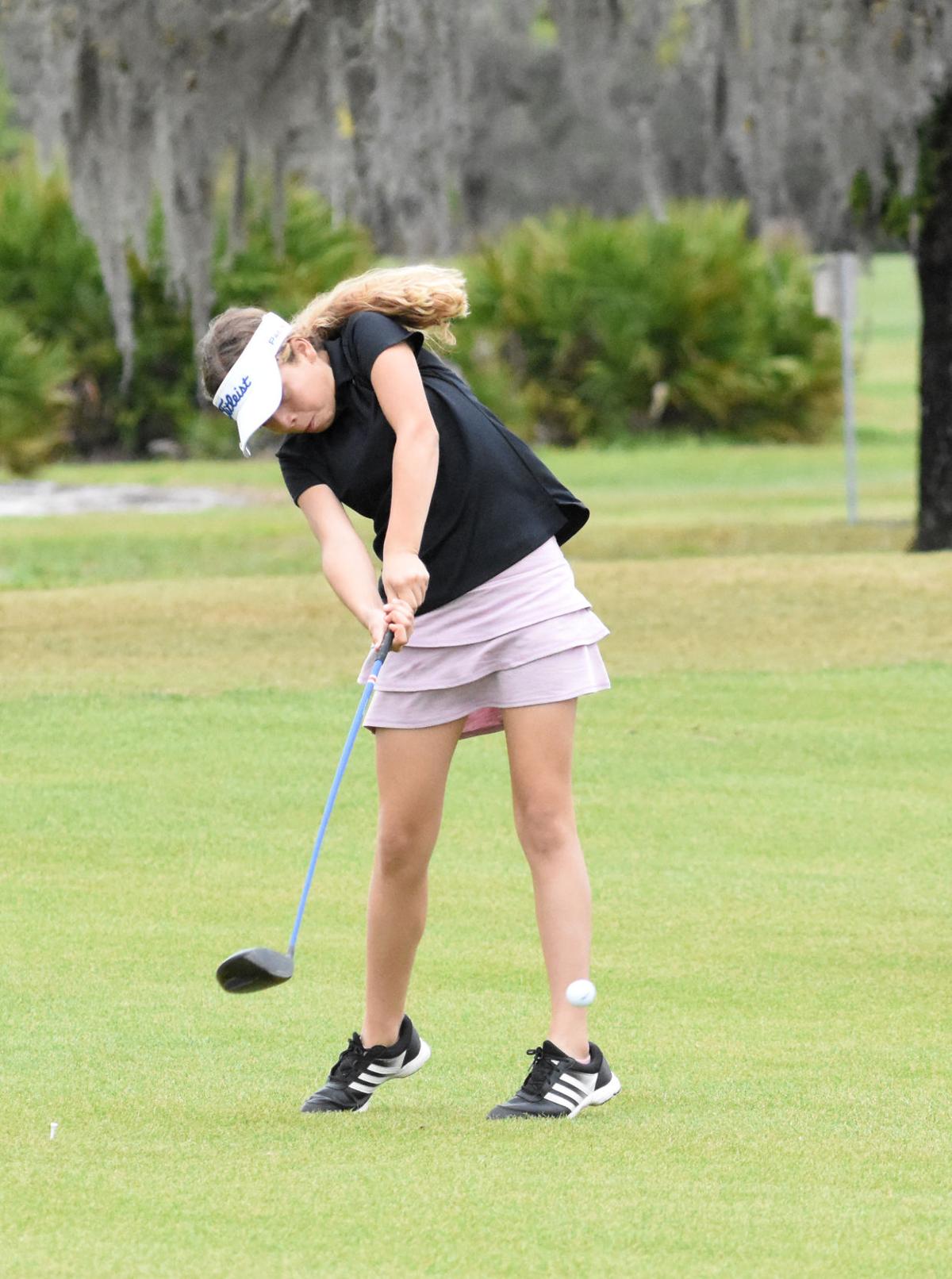 Ava Saavedra rocketed the ball out of the tee box during the Chen Dental Golf Tournament at Sun ‘N Lake Golf Club on Saturday. 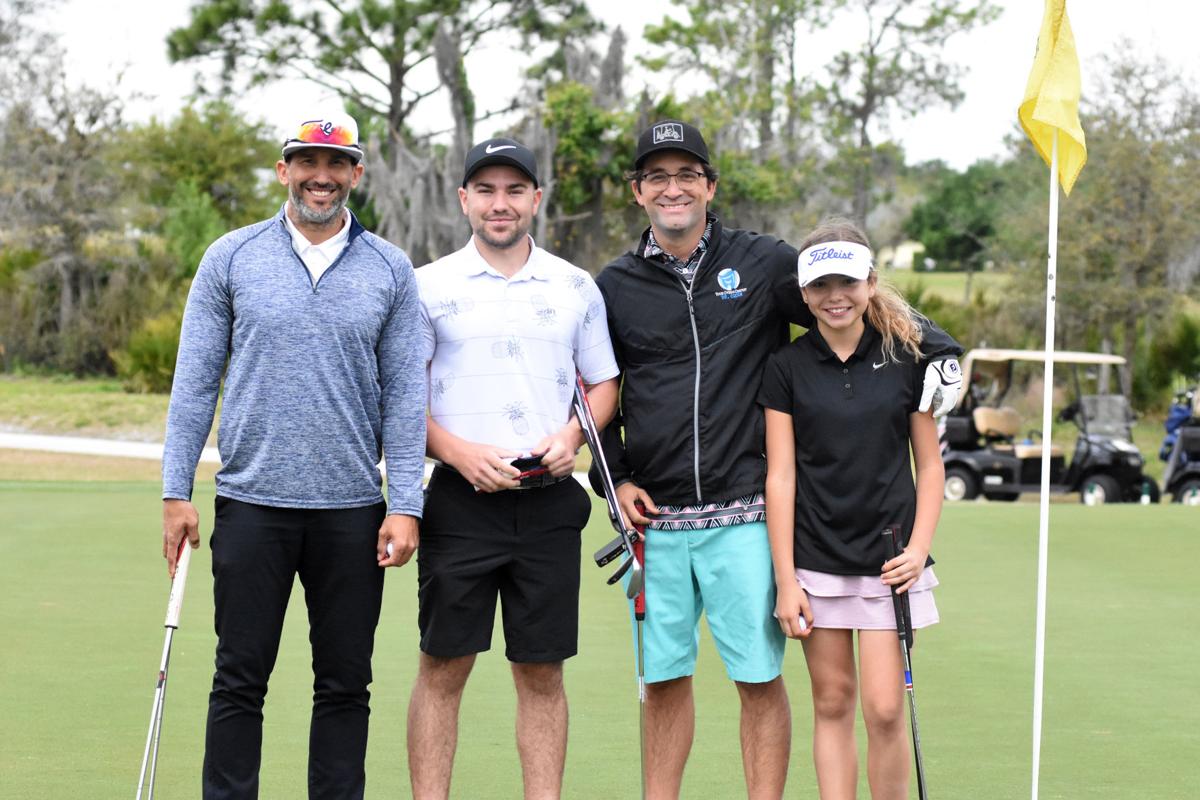 Brett Gizelt chipped his way toward the pin during Saturday’s tournament.

Ava Saavedra rocketed the ball out of the tee box during the Chen Dental Golf Tournament at Sun ‘N Lake Golf Club on Saturday.

“Today’s event is about raising money for Lindsey’s Wish,” said Sharleen Davies and Kendall McIntyre. “Linsdey’s Wish helps families who are battling cancer. We have worked with them for the last seven years. Everything we raise all goes to them. Zac Taylor is the young man that we are raising money for today and he is actually one of the golfers. There are 288 golfers which is double what we have had in year’s past.

“Lindsey (Hammortree) was a patient of ours and was from Sebring. Her family is a really big part of the community. We have seen a great turn out and we like to give to organizations that benefit families of Highlands County and that is what Champions for Children Foundation does. It has been a huge blessing to be able to give to them. We have several raffles, door prizes and awards.”

In Flight One, the team of John Smutnick, George Dumas, Don St. Onge and Tom Morway placed first with 55 strokes. In close second was the foursome of Jacque Trombley, Matt Moye, David Schumaker and Travis Kennedy with 57. The quartet of Travis Dunn, Dennis Dunn, Chris Myers and Paul Blackman came I third after matched cards with 59.

The squad of Michael Hurley, Andy Piller, Steve Griffin and Jeremy Camino claimed first in Flight Two with 56. Placing second was the group of Tommy Lovett, Lisa Lovett, David Andress and Ryan Leaphart with 58. Rounding out the top three was the team of Dave Marvin, Brian Royle, Jerry Wannamaker and Bill Hallam with 61 after match cards.

Flight Three was won by the quartet of Nick Maloyed, Joey DeSimone, Alex Fells and Jordan Bassett with 59. In close second was the squad of Dennis Murphy, Paul Fore, Mike Murphy and Steve Russell with 60. In third place was the group of Jim Doty, Glen Kundrick, Connie Doty and Kip Doty with 63.

The foursome of Mike Coffey, Mike Spear, Drew Bishop and Chris Szymanski placed first in Flight Four with 57. Coming second place was the team of Matt Nelson, AJ Danielson, Tom Blattau and Eric Rhoades with 61. After a match of cards, the third place quartet consisted of Heidi Crutchfield, Lars Bylund, Charlie Smyth and Don Young with 64.

In Flight Six, the foursome of John Harmison, Dan Murray, JR Tary and Charles Tary claimed first place with 59. Second place came down to a match of cards with the quartet of Pat Fox, Ben Backus, Richie Cormier and Josh Rodriguez placing second with 66. Also with 66 and placing third was the squad of Michael Andrews, Maegan Steele, Rich Buntenbach and Carl Purvis.

The team of Chris Gunter, Joey Lezama, Silas Berry and Wyatt Kinslow claimed first place in Flight Seven with 59. Coming in second was Charles Ervin, Phil Simonson, Chris Hutchins and Jeremy Bovee with 62. Rounding out the top three was the foursome of Linda Marvin, Ann Rheaume, Linda Royle and Taye Jackson with 65.

Flight Eight was won by the squad of Dr. Leandro Colon, Ava Saavedra, Ben Huizinga and JC Gillen with 56. After a match of cards the group of Brett Gizelt, David Leach, Paul Tate and Alex Martin claimed second with 63. Coming in third, also with 63, was the McClay team made up of Carole McClay, Adam McClay, Chris McClay and Wade McClay.

“Lindsey’s family started the foundation and we were on board, so we started this tournament to help raise money for Lindsey’s Wish,” said Dr. William Chen. “Things are coming together nicely so we can push toward leaving the legacy that she wanted. It is a true blessing to be involved and to be able to impact the community anyway we can with them, so we thank them for that. We are having a lot of fun golfing. This is our first time filling both courses and our community has really stepped up.”