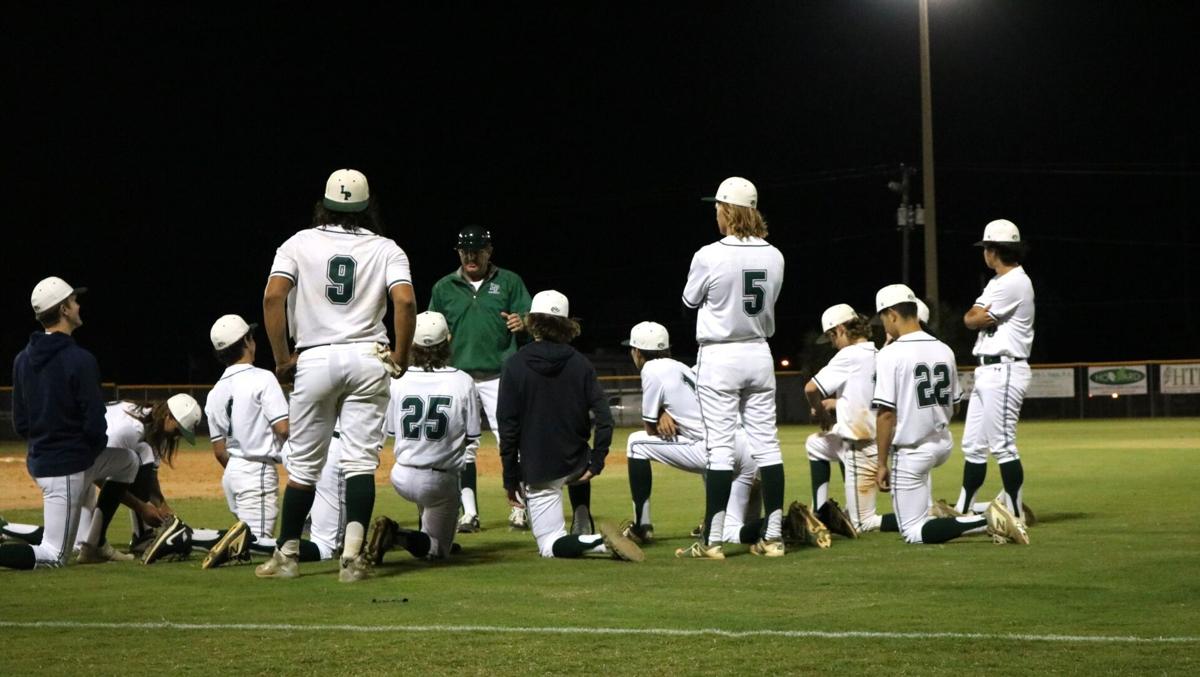 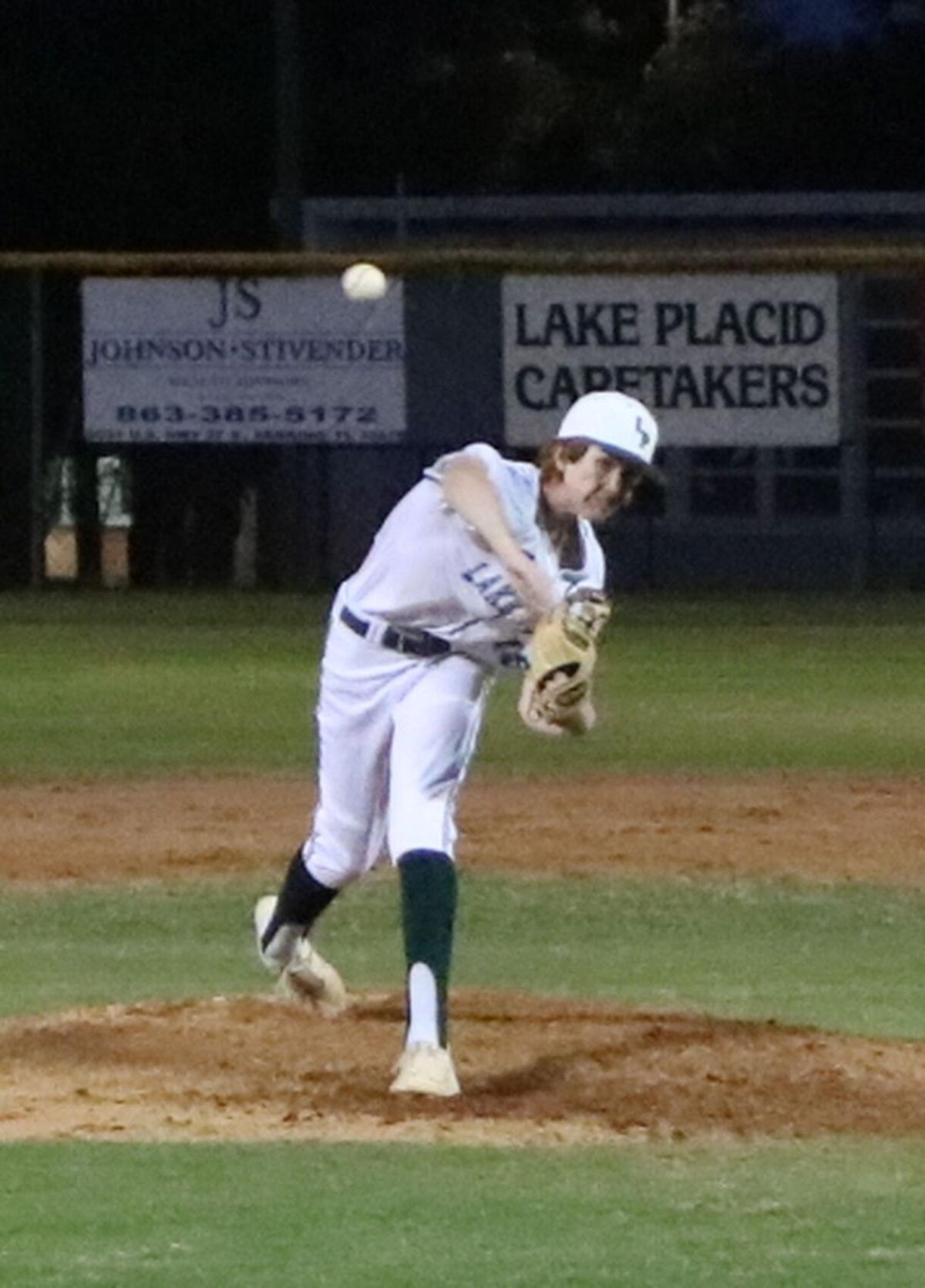 Lake Placid’s Donovan Lusby delivers and watches a pitch to a Frostproof batter. 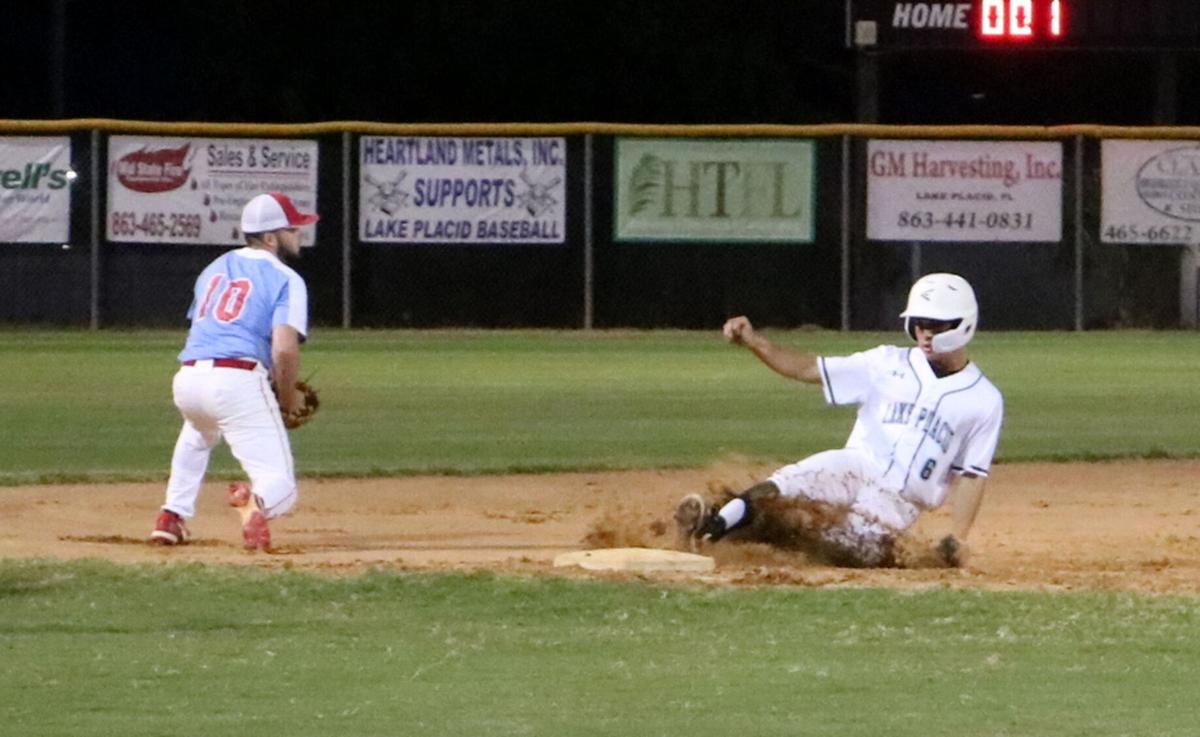 Lake Placid’s James Swaford slides into third base after he tagged up on a fly ball to right field.

Lake Placid’s Donovan Lusby delivers and watches a pitch to a Frostproof batter.

Lake Placid’s James Swaford slides into third base after he tagged up on a fly ball to right field.

LAKE PLACID — As Lake Placid’s Holden Martin threw every pitch in the seventh inning, Harry Tewksbury could just about fall off the red ball bucket he sat on. Fans could hear him yell encouragement regardless of whether it was a ball or a strike.

Martin struck out the final three batters and Tewksbury hopped off that bucket as Lake Placid snapped it’s nine-game losing streak on Thursday night with a 7-1 victory over Frostproof.

“I feel like maybe we’re starting to turn a corner because the last couple of games we’ve played pretty decent (and) we just had an inning or so here or there that we just couldn’t get through without making those mistakes,” Tewksbury said. “We got through that tonight. I was just tickled to death with how everybody played.”

“He just competed,” Tewksbury said of Lusby. “He wasn’t going to give in. He had a short memory. If he walked a guy or somebody made a mistake behind him or whatever, it didn’t seem to affect him. He’s a lot more mature than a freshman. He’s got an idea of what he’s trying to get done out there.”

Tewksbury’s excitement when Martin got the final three outs? It wasn’t because they finally won. He got excited seeing his reliever have a successful outing. Martin struggled at times this year but he went out and “threw a bunch of strikes” in that seventh inning. Tewksbury couldn’t be prouder of him.

“I came to him when we were in the bottom of the sixth and I said ‘Hey, can you get us three outs?’ He said, ‘I got you coach,’” Tewksbury said. “That’s what I want to hear. I didn’t want to hear ‘Oh, you know…’ He was ready to compete.”

An important factor was Lake Placid’s ability to limit the damage when on defense. Every loss they suffered in the losing streak resulted in one bad inning and the ensuing snowball effect of their mistakes. Errors, base hits and walks leading to five or six-run innings when they really should be one.

When runners got into scoring position or they made a few mistakes Thursday night, Lusby and the defense were able to work out of it.

Like in the top of the second inning, the Green Dragons found themselves in a bases loaded situation with two outs due to a few walks, an error and some wild pitches with Frostproof’s lead off hitter Chris Gordon at the plate.

What does Lusby do? Forces a weak ground ball to third baseman Johnny Philips for a force out at the bag. Crisis averted.

“They keep trying to play and they want to win,” Tewksbury said. “They want to compete.”

For Tewksbury, he pointed out the team’s ability to execute at times on offense. They used the bunt several times to move runners over or force the Frostproof defense into mistakes. He liked his team’s two-strike approach. It must’ve worked because the Bulldogs committed seven errors in the ballgame.

In the bottom of the third, Lake Placid scored runs off errors on batted balls by Eli Ming, James Swaford and Jacob Morgan. It gave them a 2-0 lead at the game’s midpoint.

Lusby led off the fourth with a single. An error by pitcher Jack Maggard scored him and put catcher Damian Brown on third for Ming. He singled to bring home Brown and extend the lead to 4-0.

The Lake Placid offense put it out of reach in the sixth with a three-run inning thanks to another error, some passed balls, a walk and a clutch Texas leaguer for a base hit into shallow right field by Morgan. A huge hit in Tewksbury’s eyes.

Ming and Morgan finished a combined 4-for-7 with three runs scored and two RBIs. In fact, the top four in the lineup scored a combined five of Lake Placid’s seven runs.

Tewksbury called Ming a “steady bat” for his team all year and couldn’t remember more than one game where he didn’t get a hit. Additionally, he and Morgan reached base in all eight of their plate appearances.

The fans have been a constant for the Green Dragons. Whether they won nine or lost nine, they had people there to cheer them on. Tewksbury even remembers a ton of fans coming out to support during the team’s fundraiser in early February. He believes his team feeds off that.

“They like to come watch and they enjoy being here and we sure love them being here,” he said. “When you can hear that in the stands. It’s good noise for us. It definitely makes a difference.”

Now, as he says, Tewksbury’s team just needs to keep chopping wood and clean up the mistakes they made. That starts with not getting too up on their win Thursday.

“We can’t make this our World Series,” he said. “This can’t be the biggest one of our careers or our season or anything like that, it’s got to be a stepping stone. It’s got to be something that we can build on.”

They need to continue working on their two-strike approach, capitalizing with runners in scoring position and executing. If Lake Placid does that, it’ll see more results like Thursday.

For at least that night, there was a sense of relief getting off the schneid.

“It feels like I’ve got just a 100-pound weight off my shoulders,” Tewksbury said. “These guys, I know, feel the same way. They had fun tonight, they got a taste of what it is to beat a team, it was a completely different game that we played tonight versus the last time we played them (Frostproof). It feels pretty awesome to get that one.”