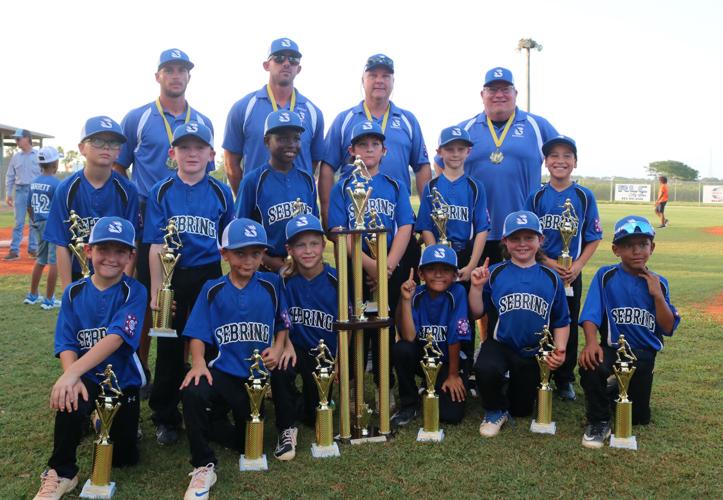 Sebring with the championship trophy after completing a four-game run to the title. 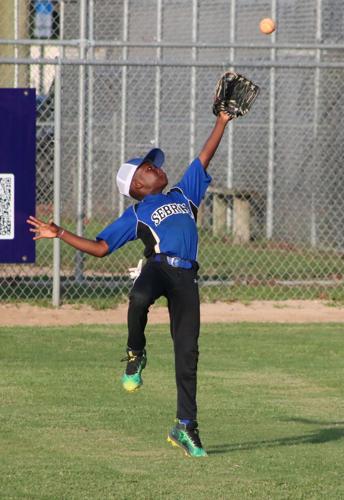 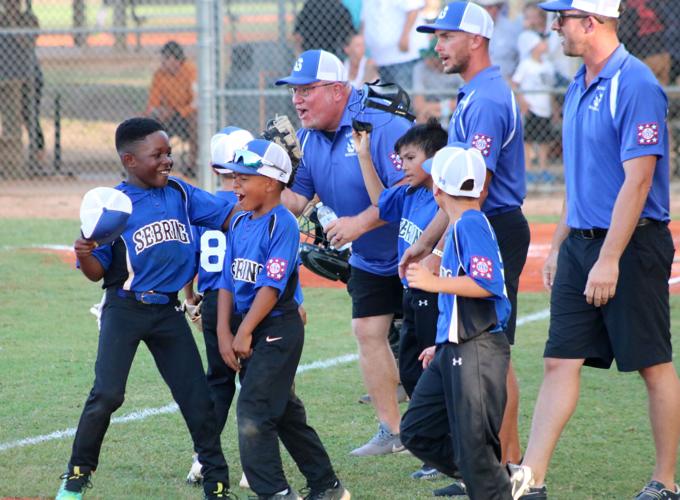 The Blue Streaks celebrate after the final out.

Sebring with the championship trophy after completing a four-game run to the title.

The Blue Streaks celebrate after the final out.

LAKE PLACID — Another local team ended its tournament with a district championship in hand.

Sebring AA Coach Pitch All-Stars defeated the Okeechobee Brahmans 11-8 Monday, thanks to a huge second inning rally, for the District 8 Florida Dixie Youth Baseball Tournament title. It capped off a phenomenal journey through the elimination bracket starting on Sunday.

Okeechobee was the lone undefeated team in the tournament meaning the Blue Streaks needed two wins for the title. A 17-8 victory on Sunday was the first part of the equation as it forced a winner-take-all Game 9 in the bracket.

The Brahmans actually held the lead through the first inning with a run scored while keeping Sebring away from the plate.

After Hunter Owens ended the top half of the second with a diving catch on a short pop-up on the infield, the Blue Streaks got their rally started.

Justus Campbell came through with a big-time double with a runner on. An error in left field allowed for the tying run to score.

Sebring then rattled off six more hits in the inning as six more runs crossed the plate. After Miles Wohl moved Campbell to third with a single, Yale Hartt and Nuk Peart smacked a pair of RBI hits to score Campbell and Wohl.

Landon Bishop brought home Hartt and Peart used his speed to score as well. Angel Otero joined the hit parade and an ensuing miscue off that allowed Bishop to score. Otero ended up out at the plate on a fielder’s choice a few batters later but aggressive baserunning from Prince Arjona brought the seventh run across.

Due to Dixie Youth Baseball rules, teams are limited to scoring seven runs per inning. Thus, Sebring was back on defense in the third to protect its 7-1 lead.

After a leadoff base hit, the Brahmans went down in order with a groundout to Jayden Paniagua at pitcher, a strikeout and a groundout to second baseman Cameron Pack.

Sebring added in the bottom of the third as a fielding error on a Campbell single allowed Brian VanBoven to come home for his second run scored of the day. But it was all the Blue Streaks could muster as Wohl hit into an out with Campbell standing on second. They went to the fourth up 8-1.

Okeechobee got two runs back as it started the inning with back-to-back hits. A one-out sacrifice fly and a two-out double cut the lead down to 8-3. However, a grounder to VanBoven ended any additional scoring chances.

The Brahmans picked up another run in the fifth but Sebring’s team had one last rally left. Owens, VanBoven and Campbell all drove in runs with two outs to push the lead to 11-4 heading into the final half inning.

And the Blue Streaks’ opponents didn’t go down easy. Okeechobee started with a leadoff single, and that runner scored on a one-out RBI triple then another base hit brought home one more. A pair of two-out knocks soon put the game at 11-8. An error brought the tying run to the plate.

But it wasn’t meant to be for the Brahmans as a pop-up ended up in the glove of the first baseman Arjona to seal the win and the district championship for Sebring.

It capped off a four-game run against three separate teams to finish off the tournament after losing to Avon Park on Saturday. First the Blue Streaks downed Lake Placid, then got the rematch they wanted and walked off the Red Devils and finally pulled out a big win against Okeechobee to get to the championship.

“I think both those wins – Avon Park and Okeechobee – showed our team a lot about themselves, and how good they really were,” manager Mickey Pack said. “So, once we got those three wins (on Sunday), we really felt like (Monday) if we could just get our one big inning going that we’d end up being the champions.”

Sebring scored double-digit runs over this four-game stretch after being held to four in its lone loss. Pack has a lot of confidence in his offense, believing they can score 15 to 20 runs a game.

But he credited the defensive skills of the teams they faced over the weekend. He thought his team realized that and adjusted to it. It’s not like the city league anymore.

Now Sebring moves on to the state tournament in Frostproof on July 2. Pack remembers representing his city when he was a kid in the 80s. This district win gave him and others another special moment.

“I’m a Sebring guy through and through and blue is my color,” Pack said. “So, to be able to do this with my son (Cameron), and all these wonderful kids and parents this is what baseball’s about. It’s like (what) small town living is all about.”