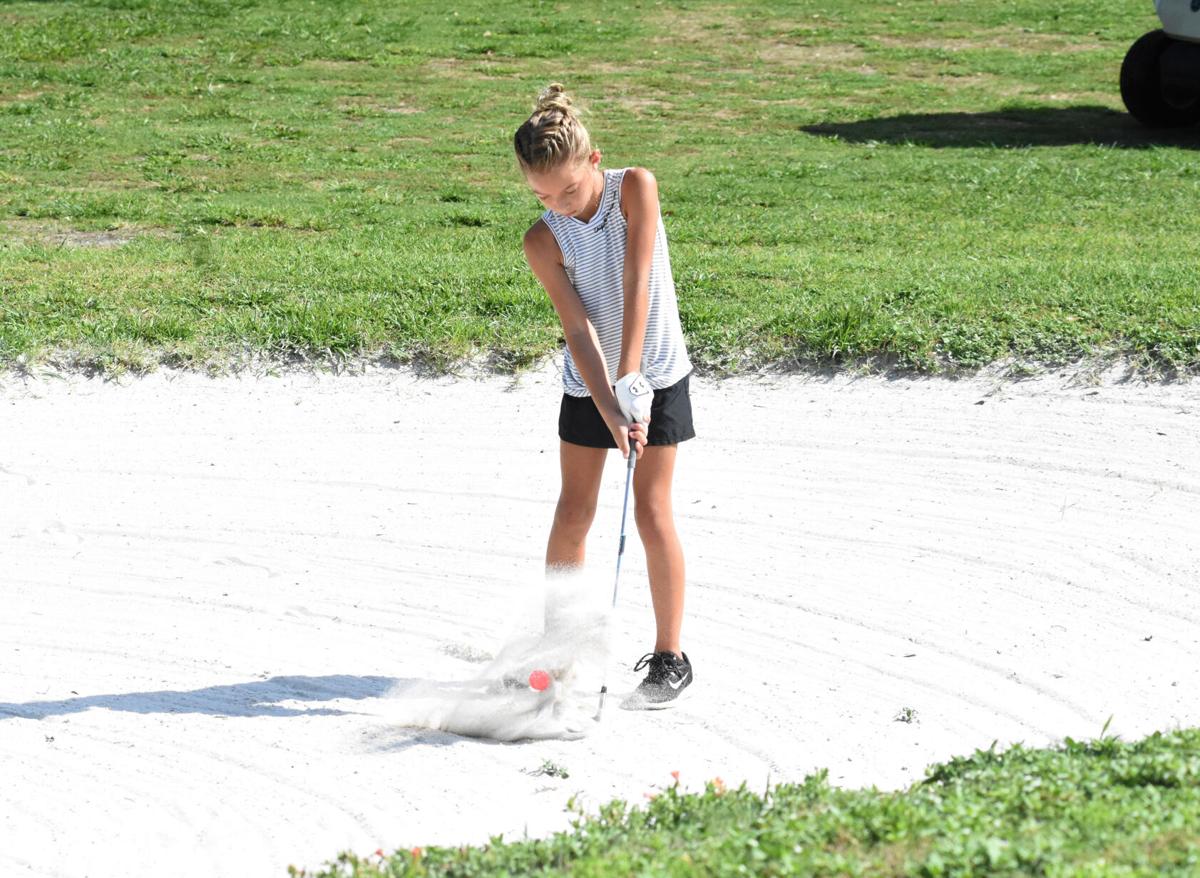 Parker Presley blasted out a bunker at Placid Lakes Golf Course during event No. 8 of the Sertoma Junior Golf Tour. 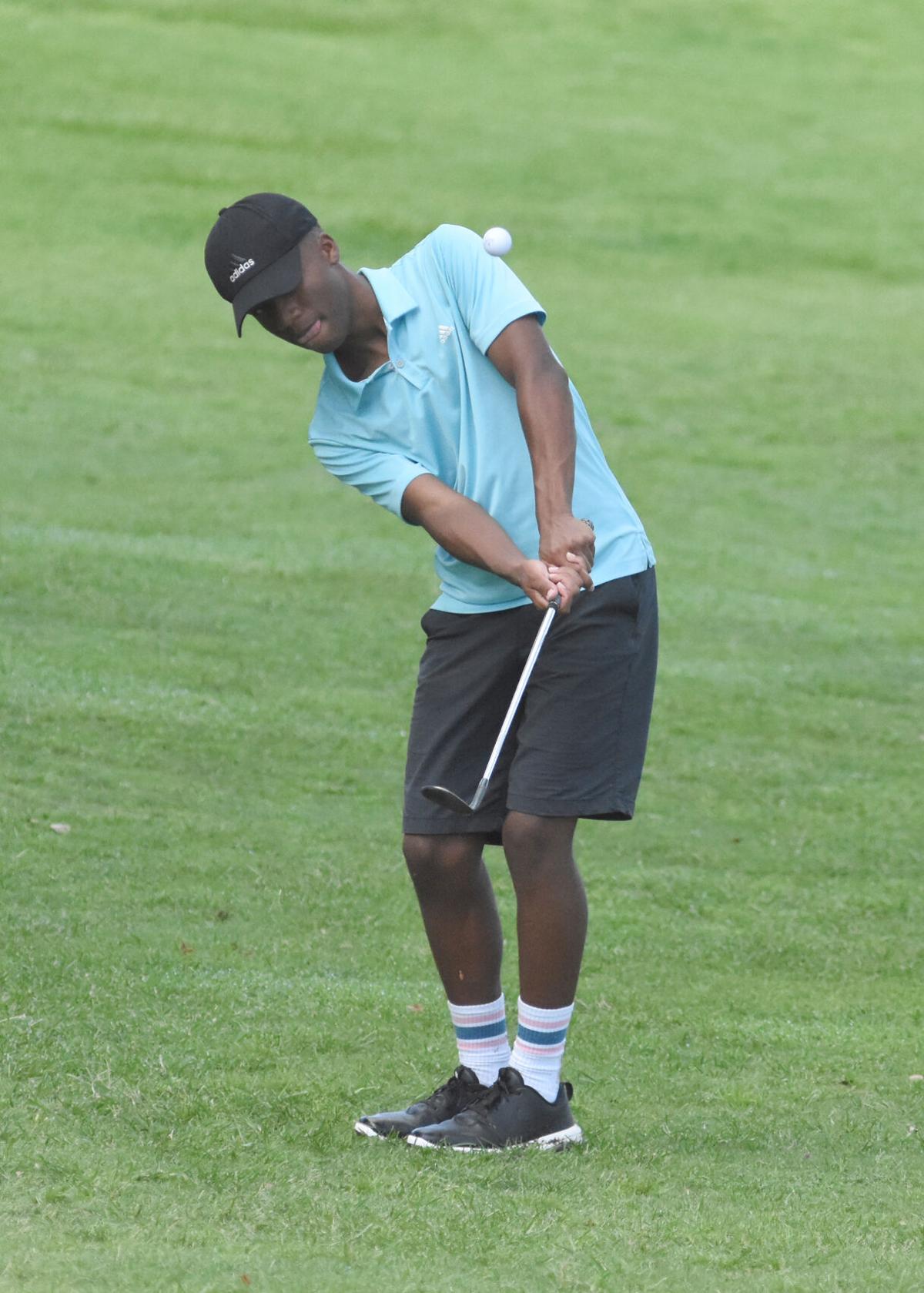 Ranen Carmichael chipped his way onto the green on hole No. 2 at Placid Lakes Golf Course. 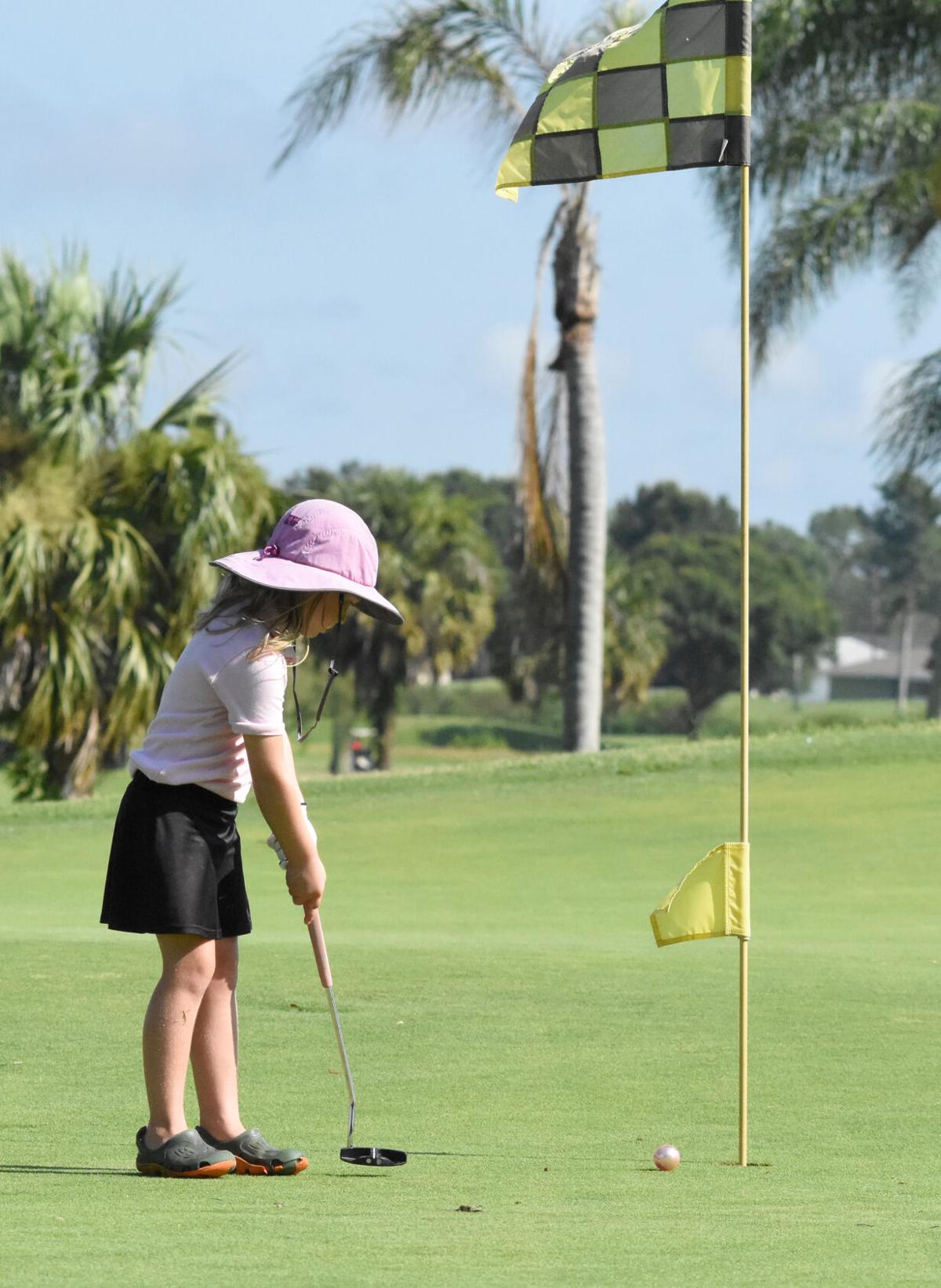 Brooke Wortinger, who is just 5 years old, sank a putt during the Sertoma Junior Golf Tour. 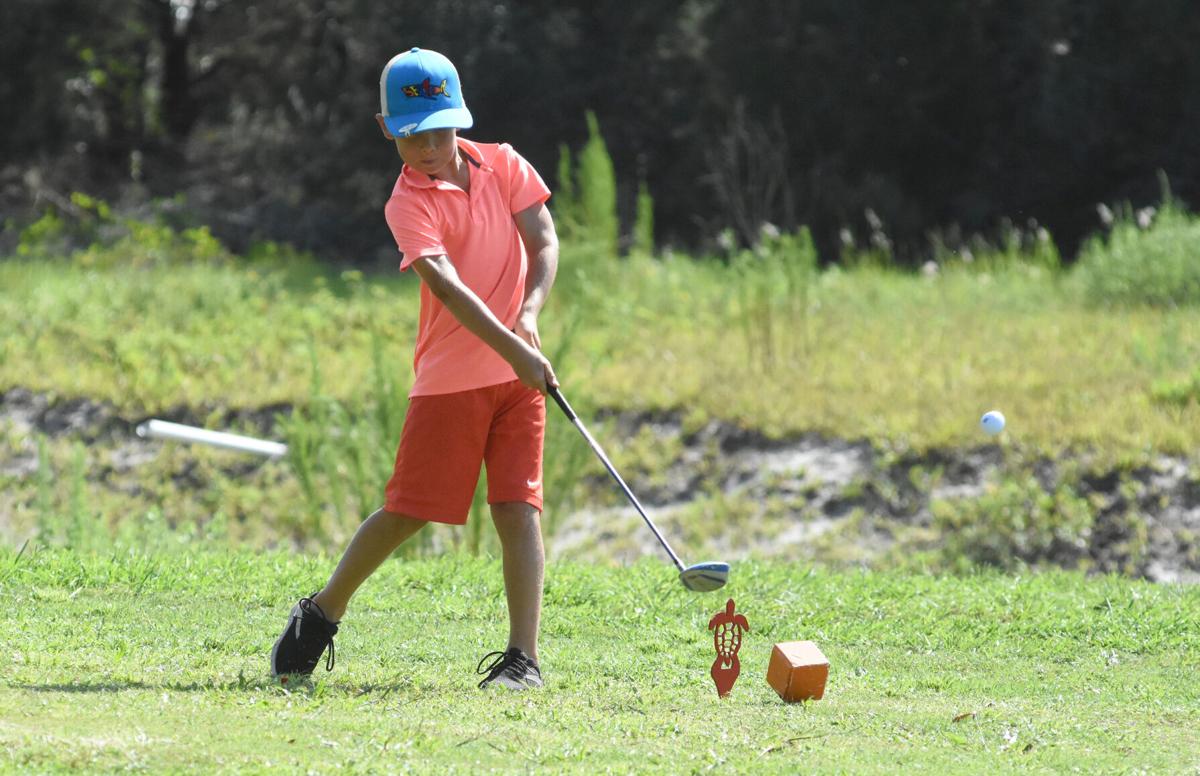 Nixon Bone rocketed the ball out of the tee box at Placid Lakes Golf Course.

Parker Presley blasted out a bunker at Placid Lakes Golf Course during event No. 8 of the Sertoma Junior Golf Tour.

Ranen Carmichael chipped his way onto the green on hole No. 2 at Placid Lakes Golf Course.

Brooke Wortinger, who is just 5 years old, sank a putt during the Sertoma Junior Golf Tour.

Nixon Bone rocketed the ball out of the tee box at Placid Lakes Golf Course.

LAKE PLACID – The Sertoma Junior Golf Tour stopped at the Placid Lakes Country Club for event No. 8. It was a beautiful day as 48 junior golfers hit the links.

“It was a good day of golf,” said Sertoma Junior Golf Tour Director Andy Kesling. “The course is long and tough for the kids. The greens tend to be quite undulating so it was a good test for the kids and it was a little wet making the golf course long. It was a great layout and I think they all did pretty well.”

Lane Revell was back on top in the boys 16-18 age division when he fired a 73 placing him in first. There was a tie for second with Robby Hill and Beckham Donovan each shooting an 81. Ranen Carmichael came in with 86. In the overall points standings, Revell has a commanding 31-point lead with a 282. Avery Hurst is in second with 251 and sitting in third is Cade Scarborough with 232.

Brayden Smith and Trent Bray tied for first in the boys 14-15 group when they each carded an 83. There was also a tie for third when Jay Walkup and Jayden Bolin came in with 98 apiece. JR Redding fired a 104 and Jayson Kellum had 140. B. Smith is in first in the points standings and has a 12-point lead with a 285, Bray has 273 placing him second and, with 264, Walkup is currently in third.

“Brayden (Smith) and Trent (Bray) continue to battle it out,” Kesling stated. “This is the second or third time that they have tied this season. They are good friends and play a lot of golf together so they are having a fun competition between each other.”

In the girls 14-18 squad it was a nail-biter, Ashley Zimmerman placed first when she carded an 84. Coming in second was Samantha Presley who shot a 93 and rounding out the top three was Rylie Franze with 128. Tori West came in with 129, Lexi Luevano fired a 130, Hayli Simmons had 136, Mariana Chams shot a 141 and Katie Howard came in with 153. In the overall point standings, the score is close with Melanie Suarez in a slight 4-point lead with 279 and in close second is Taylor Derr with 275. Sitting in third is S. Presley with 254.

“This was Ashley’s (Zimmerman) first tournament in a few years,” Kesling explained. “She is from Naples and we are happy to have her. It is nice to have a golfer that will push the rest of the kids in the age group. Ashley is a good player and will be good competition for our local girls.”

Hannah Castillo remains undefeated in the girls 11-13 division and shot a 46 during event No. 8. Lottie Howard carded a 79 placing her in second. With an outstanding 39-point lead H. Castillo is currently in first place with 300 points. Jenesi Trevino is in second with 261 and rounding out the top three is Olivia Kesling with 238.

“Hannah (Castillo) is quite a player and is only 10,” Kesling said. “She has a bright future ahead of her and this next tournament she will be moving up to play 18 holes with the bigger girls before moving back down to compete in the championship. We are really proud of her, she is fun to watch play and she loves it, which is the key to wanting to practice and get better.”

The boys 11-13 group was won by Marquez Angeles who fired a 41. In close second was Benjamin Trevino with a 44. There was a tie for third when Alex Kruschwitz and Matthew Suarez each shot a 46. John Roberts carded a 50, Austin Henning came in with 59, Tye Gross fired a 61 and Lincoln Kampman had 74. Overall, B. Trevino has an impressive 34-point lead with a total of 294. Angeles is in second with 260 and Matthew Suarez has 237 placing him in third.

“Marquez (Angeles) and Benjamin (Trevino) are the top two in that division and it will come down to the wire for them,” Kesling said. “It is a good division to be watching.”

“Devin (Wortinger) is back on top and is getting his game into shape,” Kesling explained. “That came down to the last hole for those boys and that is what we love to see each week. We want to get them to where every shot means a little more coming down the stretch. That is invaluable experience that you don’t get unless you are playing competitive golf and it is good to see it here at the end.”

In the 6-8 division, Zoe Hout came out on top when she carded a 26. Coming in second was Owen Smith, who shot a 28, and JD Scheipsmeier placed third with a 33. Nixon Bone fired a 35, Parker Presley came in with 37 while Isabella Morris and Ashlyn Wortinger tied with 41 each. Kyle Albritton had 42 and Brooke Wortinger carded a 53. Hout is in first place with 294 points in the standings, in close second is Owen Smith with 282 and sitting in third place is Scheipsmeier with 234.

“Zoe (Hout) and Owen (Smith) are neck-and-neck every week,” Kesling said. “Zoe has come up big when it has mattered the most and is playing well. We are really proud of her and Owen played his best round of the year as well. It is fun to watch those little ones.”

The Sertoma Junior Golf Tour is winding down but the golfers are gearing up for the Tour Championship. The ninth event of the season takes place today at Highlands Ridge North. The first group will tee off at 7:30 a.m.