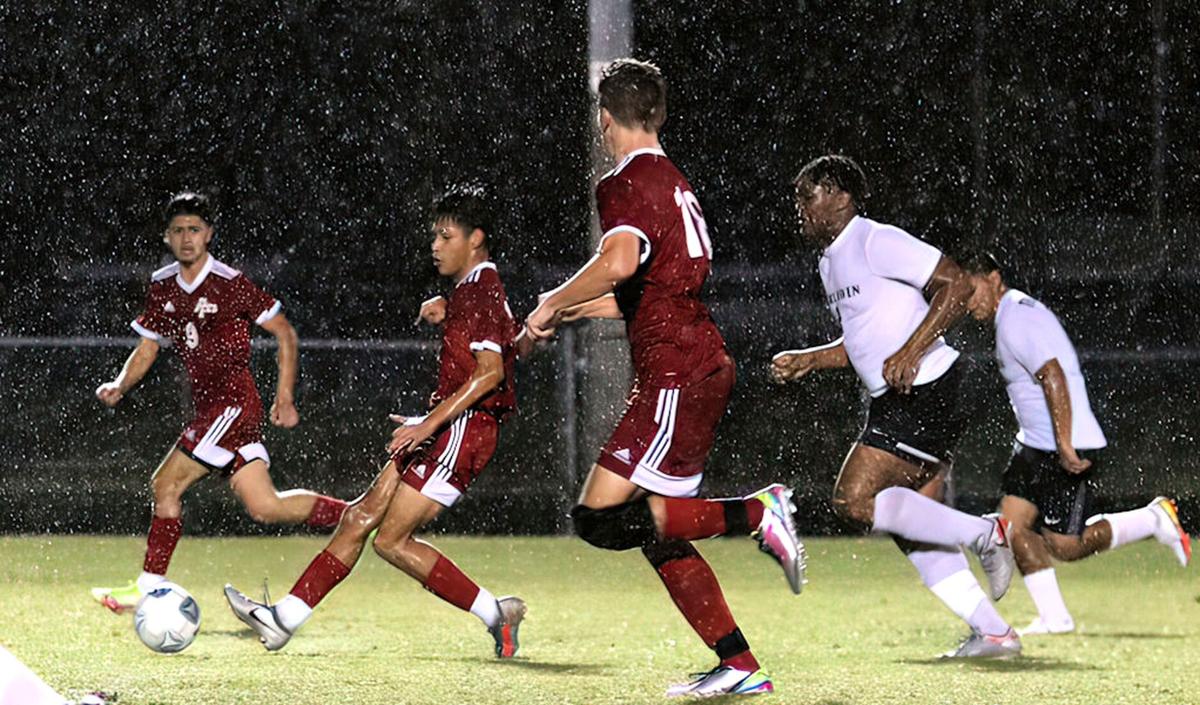 Heavy rain did not slow the Avon Park offense down as they push the ball up field against Moore Haven. 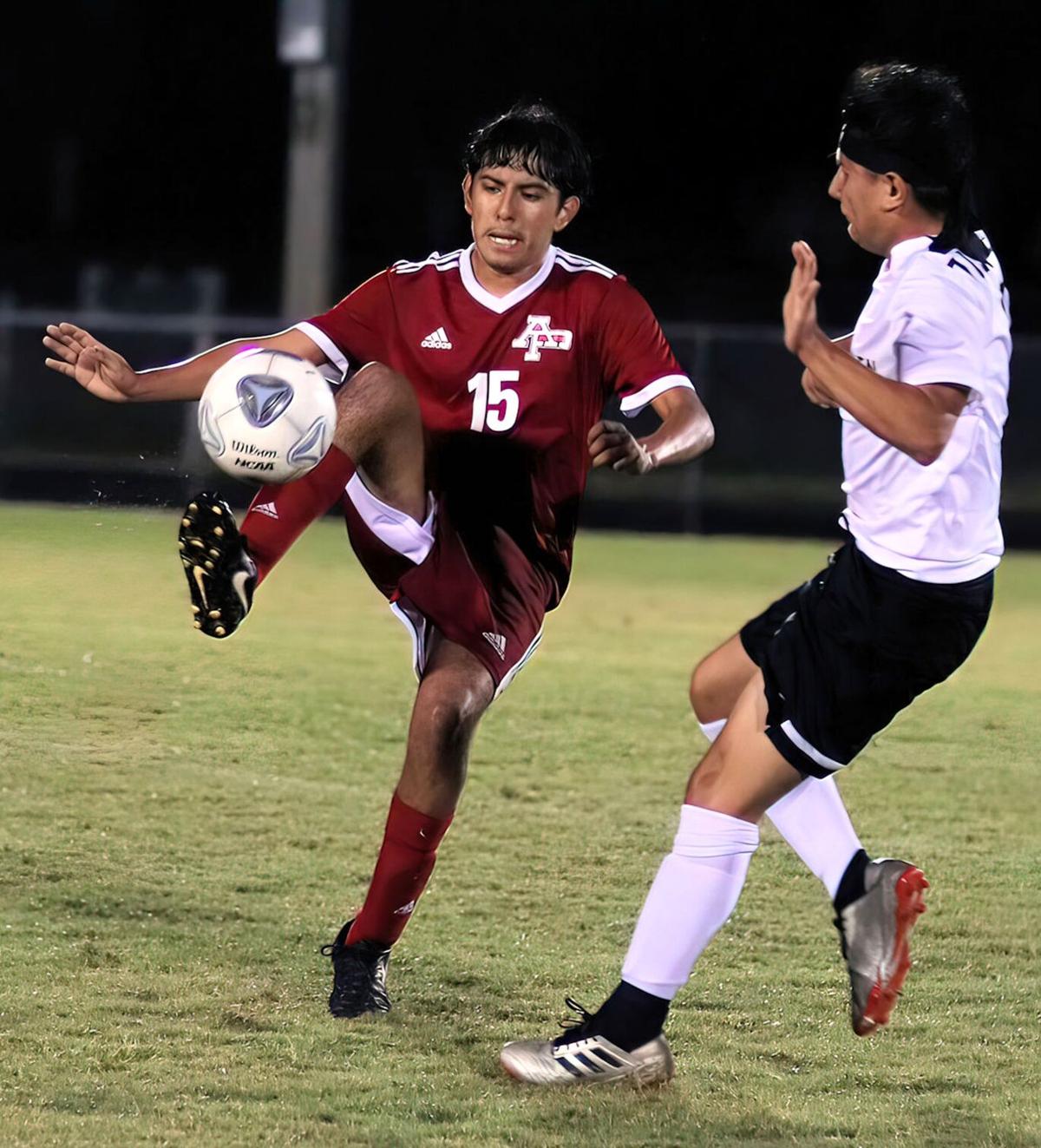 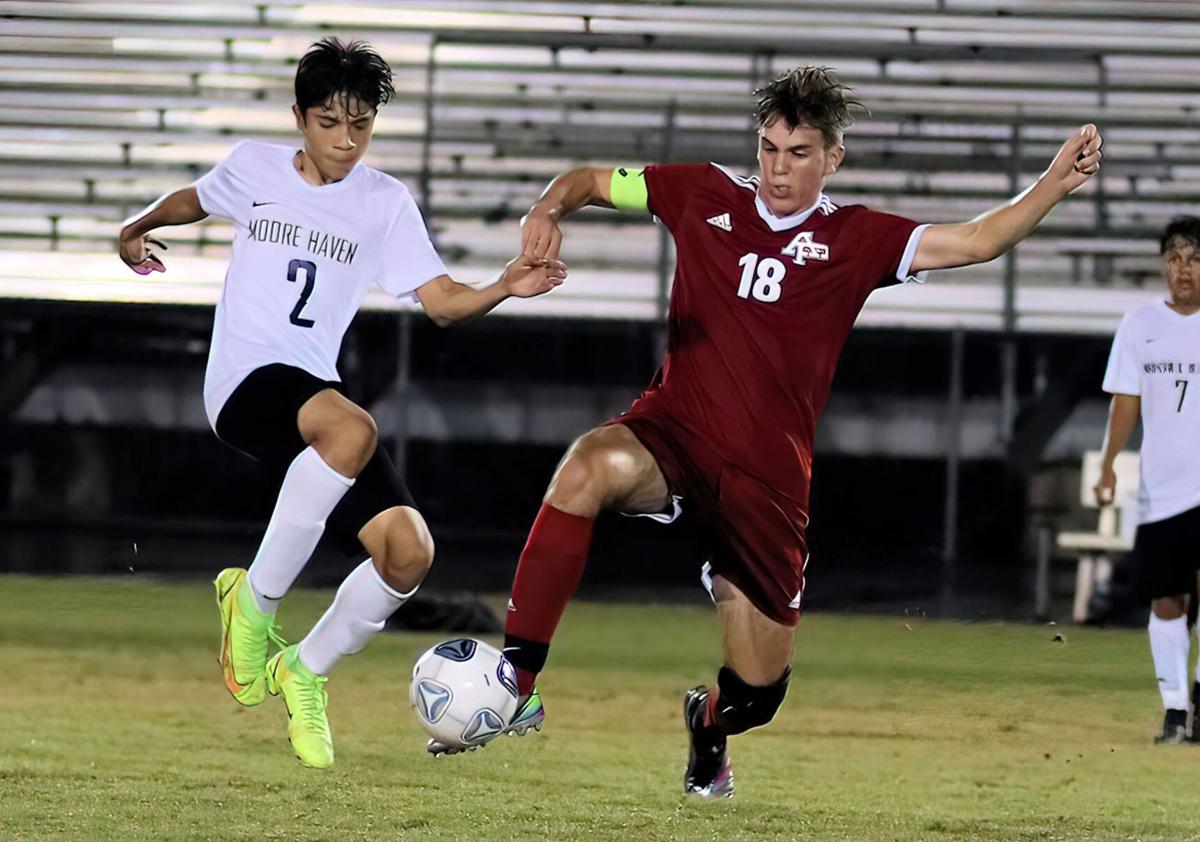 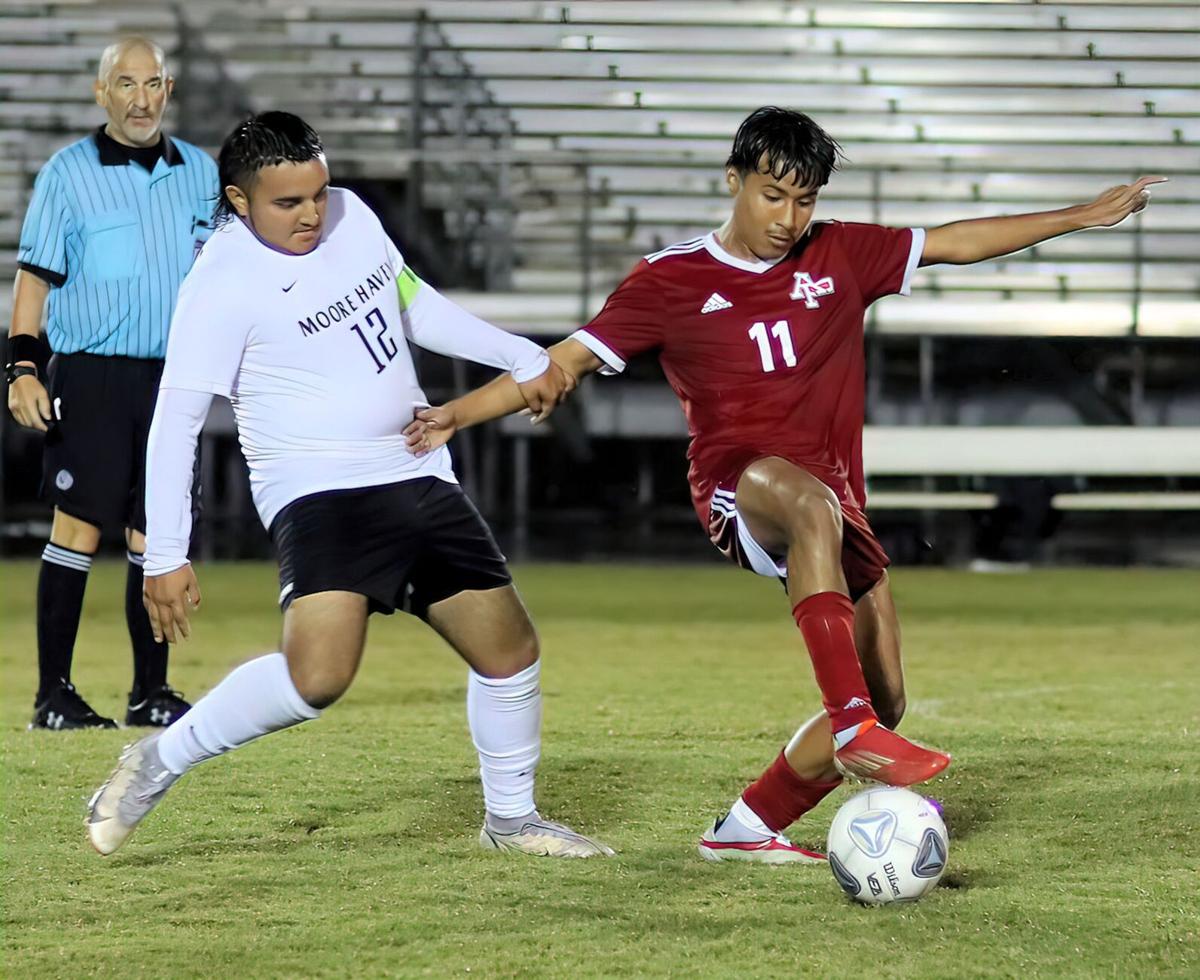 Avon Park’s Bryan Sanchez-Guzman (11) tries to fend off Moore Haven’s Hector Secundino (12) while trying to maintain possession and control of the ball.

Heavy rain did not slow the Avon Park offense down as they push the ball up field against Moore Haven.

Avon Park’s Bryan Sanchez-Guzman (11) tries to fend off Moore Haven’s Hector Secundino (12) while trying to maintain possession and control of the ball.

AVON PARK – The Avon Park Red Devils boys soccer team rebounded from an opening season loss to the Lake Placid Green Dragons on Tuesday at home to beat the Moore Haven Terriers on Thursday at Joe Franza Stadium in Avon Park by an 8-0 score to even their record to 1-1 on the season.

“I was pleased, we were disappointed with the outcome against Lake Placid,” said Avon Park Coach Joshua Virkler. “We thought we could have done better, but I am glad to see the guys go about this game in a real workman type of way, they bore down, they scored the goals they needed to score, they needed to get that win under their belts.”

Avon Park, like in the Lake Placid game, took an early lead as Chase Bandazian hammered in a shot from 20 yards out to give the Red Devils a 1-0 lead.

Unlike the Lake Placid game, Avon Park did not give up a goal and scored a second goal midway through the first half on a 10 yarder by Omar Valencia-Calixtro to take a 2-0 lead that the Red Devils carried into the half.

Avon Park extended their lead to 3-0 three minutes into the second half on Omar Valencia-Calixtro’s second goal of the night.

Valencia-Calixtro was not quite finished as he scored a third goal three minutes later as the Red Devils doubled their halftime lead to 4-0 in the first six minutes of the second half.

Avon Park continued to put pressure on the Moore Haven defense and with 31 minutes left in the game, Thomas Guzman-Gomez added a goal that made the score 5-0.

With 30 minutes left on the clock, a light rain and drizzle that the game started with began to pour down a little harder, though that did not slow down the Red Devil offense as David Najera-Guzman scored to widen Avon Park’s lead to 6-0 with 28 minutes left to play.

Five minutes later, Alejandro Hernandez netted a goal from 10 yards out to make the score 7-0 and on the verge on ending the game early on the eight goal mercy rule.

That moment briefly came with 15 minutes left in the game when Eric Marquez seemed to score the winning goal from 30 yards out, only to have it called void due to an offsides penalty.

It took Avon Park another nine minutes before Avon Park scored the winning and ending goal off a Red Devil corner that bounced around the front of the net before Bandazian took the winning shot from 18 yards out to give the Red Devils the 8-0 victory.

“The difference in the number of goals from the first half to the second half was the quality of our passing,” said Virkler. “In the first half, we were in good positions, had the right ideas, our passes were letting us down because they were not accurate enough.”

“When we cleaned that up in the second half, a little better technique, we found a lot of space to play up high on their half of the field.”

Avon Park will host the Frostproof Bulldogs next Friday as their last game before the holiday break then travel to Sebring on Tuesday, November 30.