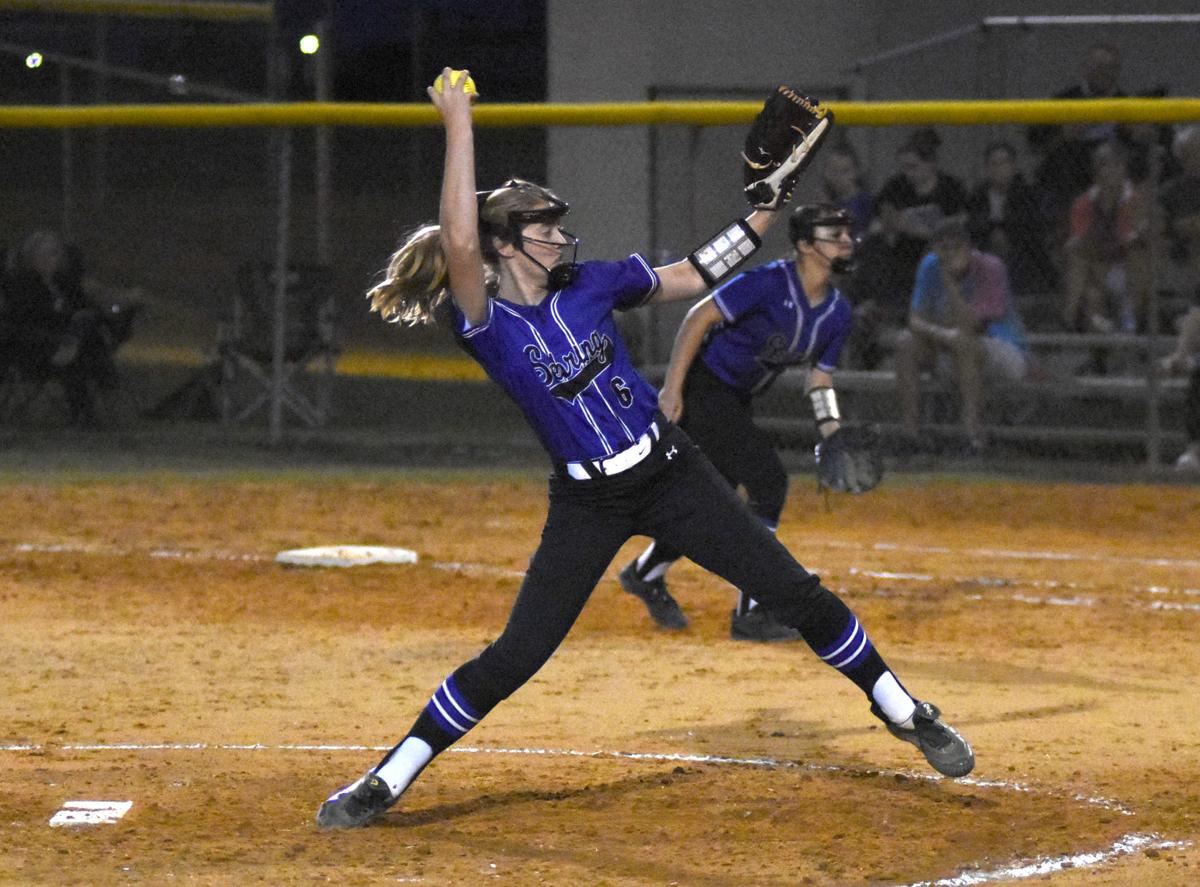 Sebring’s Maci Barnhart winds up a pitch during Tuesday’s game against LaBelle. 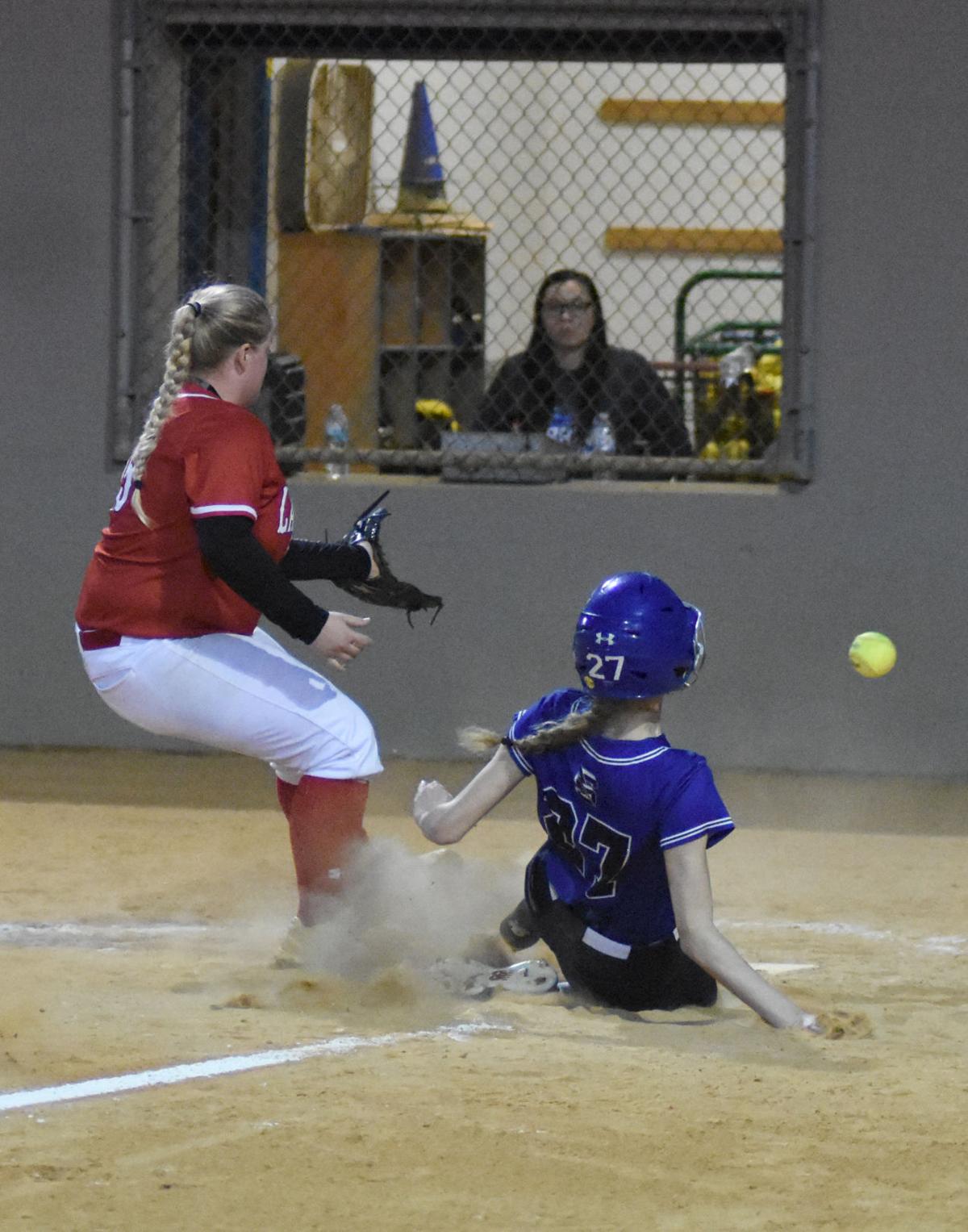 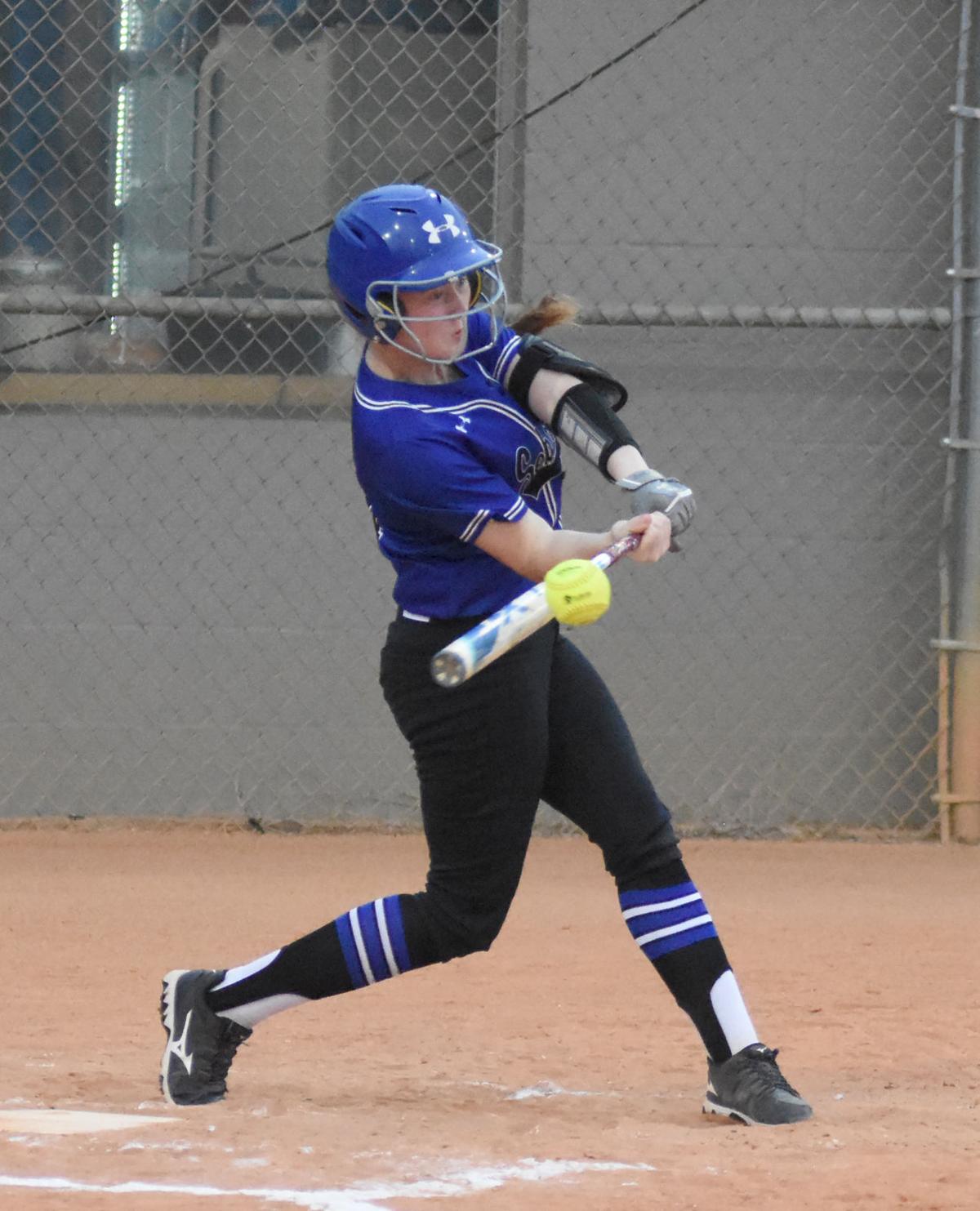 Sebring’s Emily White connected with the ball during Tuesday’s game against LaBelle. 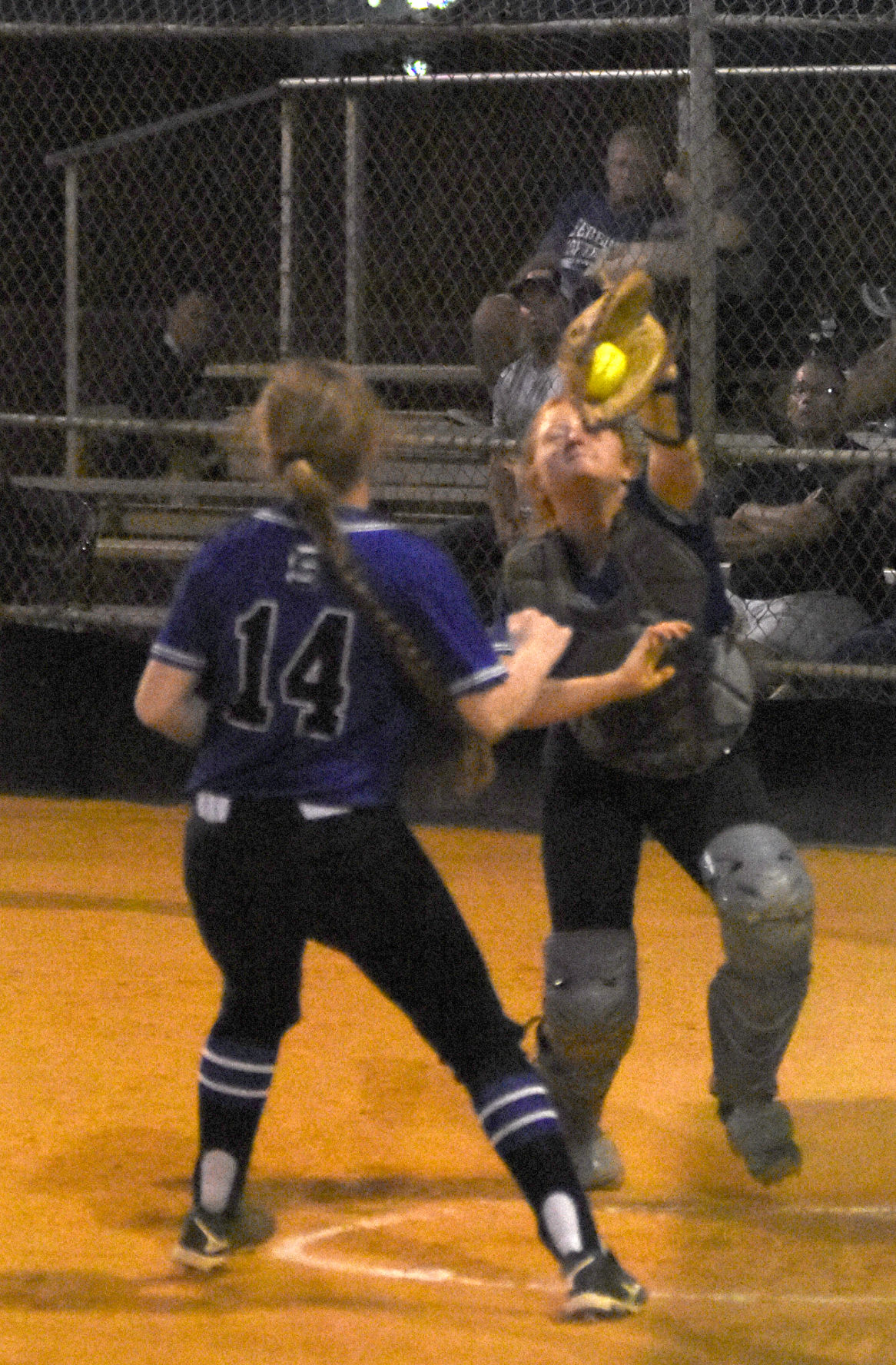 Sebring’s catcher Paige Benton catches a fly ball out of bounds for an out. 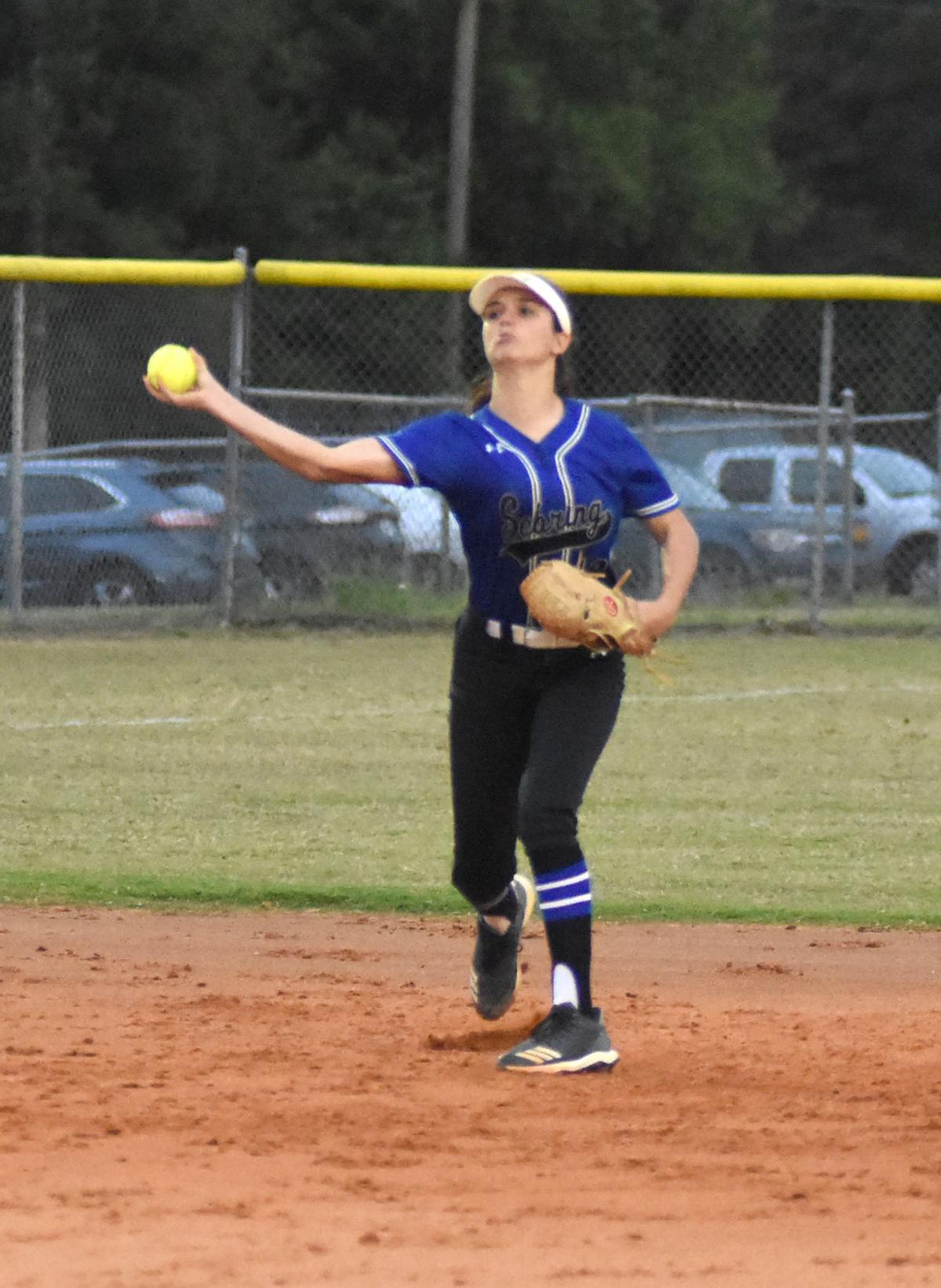 Sebring’s Alyssa Perez picked up a grounder at shortstop and threw to first for an out.

Sebring’s Maci Barnhart winds up a pitch during Tuesday’s game against LaBelle.

Sebring’s Emily White connected with the ball during Tuesday’s game against LaBelle.

Sebring’s catcher Paige Benton catches a fly ball out of bounds for an out.

Sebring’s Alyssa Perez picked up a grounder at shortstop and threw to first for an out.

SEBRING – After a late start, the Sebring Blue Streaks dominated on the diamond. Sebring blanked the LaBelle Cowgirls 6-0. This victory raises the Blue Streaks record to 7-2 on the season.

“We were a little late picking up offense but I never doubted the girls,” said Sebring Coach Hector Perez. “I knew once we saw her (LaBelle’s pitcher) one time around the line up, I was sure we would get through it. Adrianna Dubois has been hot, she hit two doubles today and has been doing a great job for me. She barely missed a home run. I told her ‘one more donut and you would have had it.’

“She has been hitting the ball well for me and has been making adjustments at the plate that have been working out well for her. Maci (Barnhart) is phenomenal, she is as cool as a cucumber when times are tough and makes it happen. She had multiple strikeouts tonight. I am very proud of the girls, we work hard on our nights off and put in the work. We do a lot of offense and defense and it shows. This was our second game without any errors.”

It was a battle of the pitchers during Tuesday’s game. The first run did not come across the plate until the fourth inning. Maci Barnhart led the Blue Streaks on the mound and struck out 11 batters.

In the bottom of the fourth, Mckinley Carver bunted to get on first, stole second and went to third on a wild pitch. Trinity Rohrer hit a sacrifice bunt to the pitcher driving in Carver putting Sebring up 1-0.

The Blue Streaks expanded their lead in the fifth inning. Jenna Caputo hit a line drive into right field for a single and Barnhart was hit by a pitch to get on. Gianna Dunbar came in to run for the pitcher. Alyssa Perez stepped to the plate and rocketed the ball deep into left field driving in Caputo for an RBI double increasing Sebring’s lead to 2-0.

With runners in scoring position Carver hammered a rope into left driving in both Dunbar and Perez for a two-run ribbie triple. Carver took home on a wild pitch furthering the Blue Streaks’ lead to 5-0. Rohrer drew a walk and stole second shortly after. Adrianna Dubois stepped to the plate and clobbered the ball to left field fence nearly hitting a homer but the ball hit the top of the fence and bounced back into left field. Dubois drove in Rohrer and landed on second giving Sebring an overwhelming 6-0 lead.

“I felt pretty good tonight,” said Adrianna Dubois. “After my first at bat I was a little irritated because I dropped my shoulder but my second at bat I calmed down and adjusted to the pitcher. Hector has really changed my batting. I went from not hitting much to being the third highest batting average on the team. We have a young team this year but we are doing great. At the start of the year I was skeptical because I thought it would be a lot different than it is. For the last three years Coach Sinness was like our softball dad but Hector came in and has made me a better player.”

“This season I want to be committed somewhere and I also want to be a captain that these girls can look up to. I am senior and I’m leaving this year and I want them to look up to me and remember who I was as player. Knowing this is my last season hits home because I always said ‘I have another year to play, I have another year to play’ and now this is the last year. Not being committed and not having a scholarship puts a lot of pressure on me. I want to keep going, I don’t want the season to end. I love this team and they are like my sisters.”

LaBelle was unable to rally and the Blue Streaks shutout the Cowgirls 6-0. Sebring will host the George Jenkins Eagles Friday at 7 p.m.