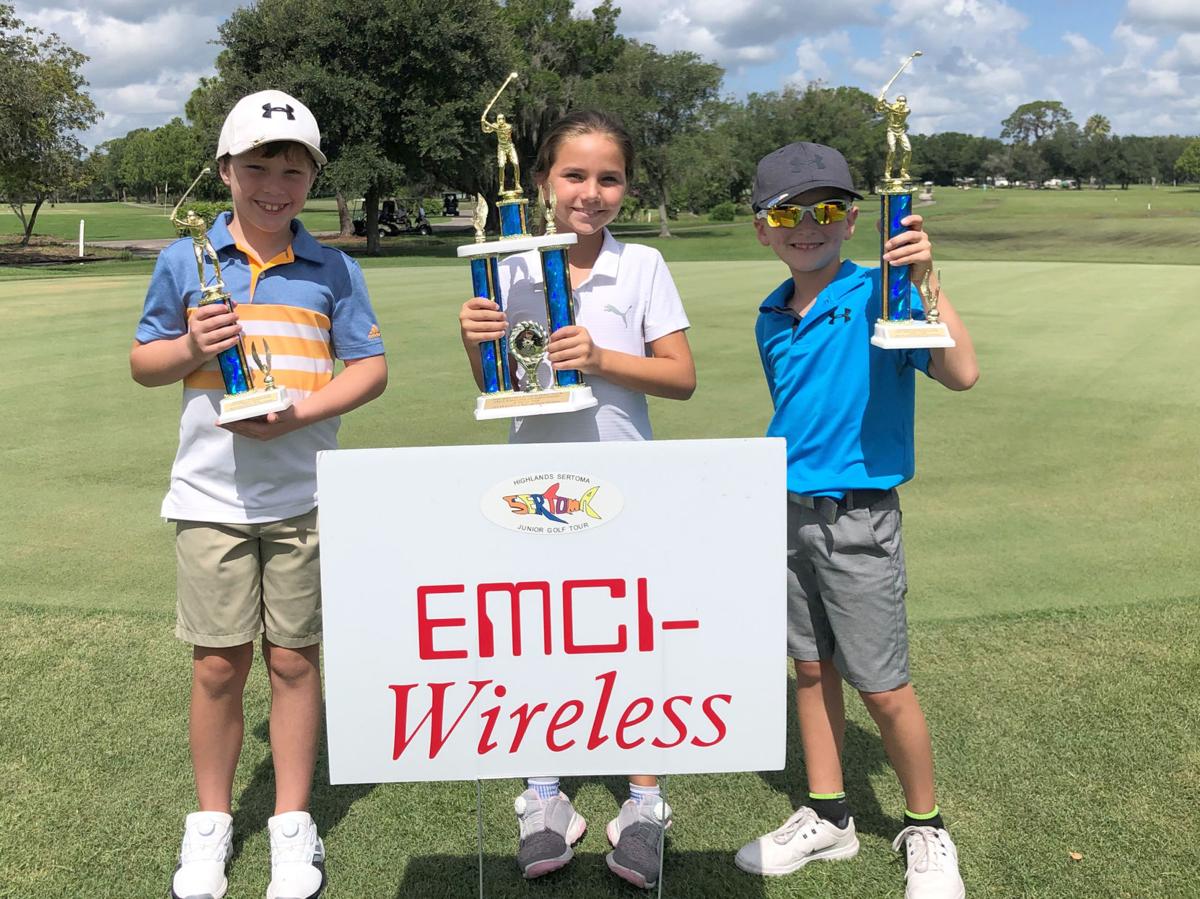 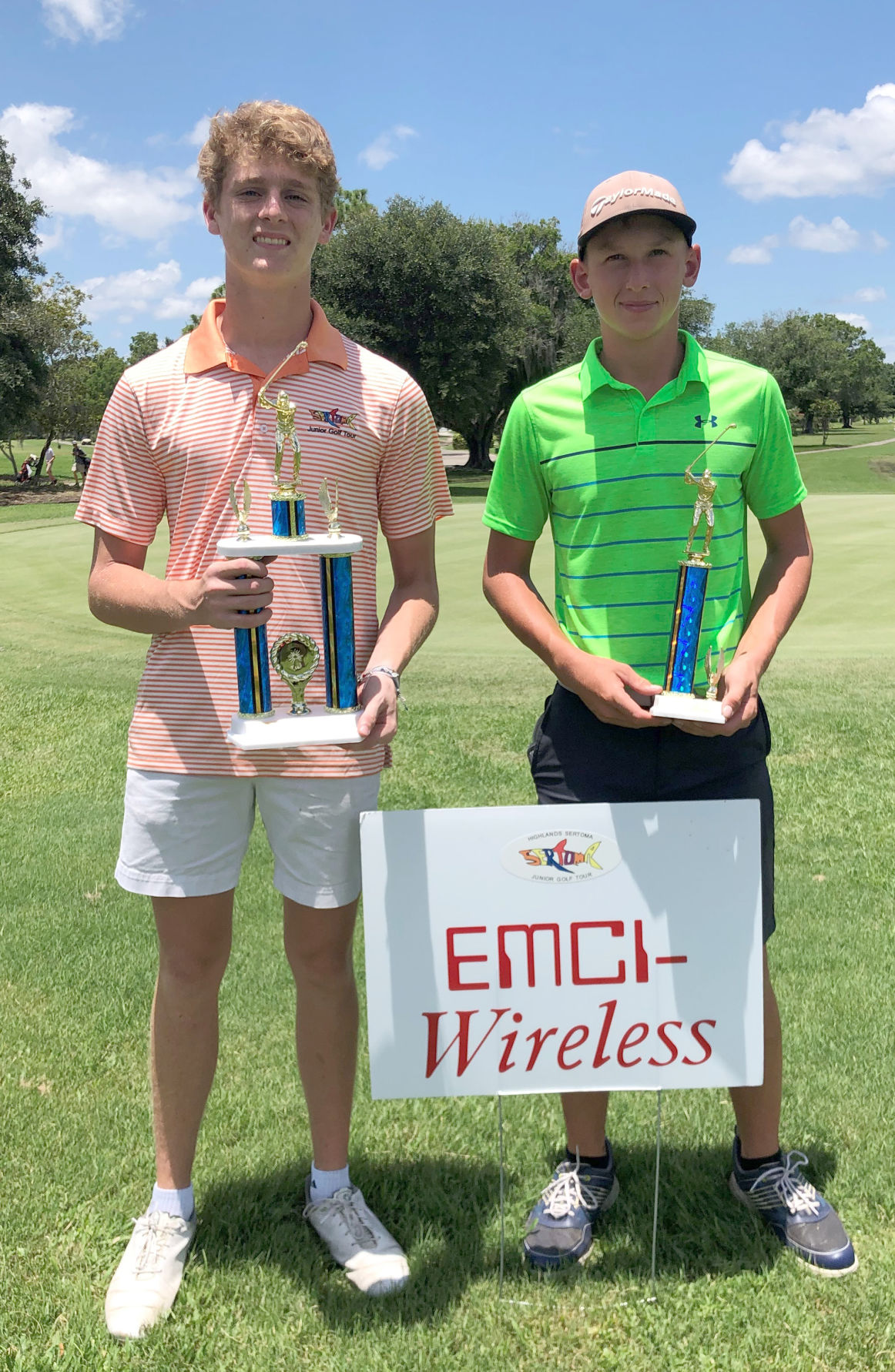 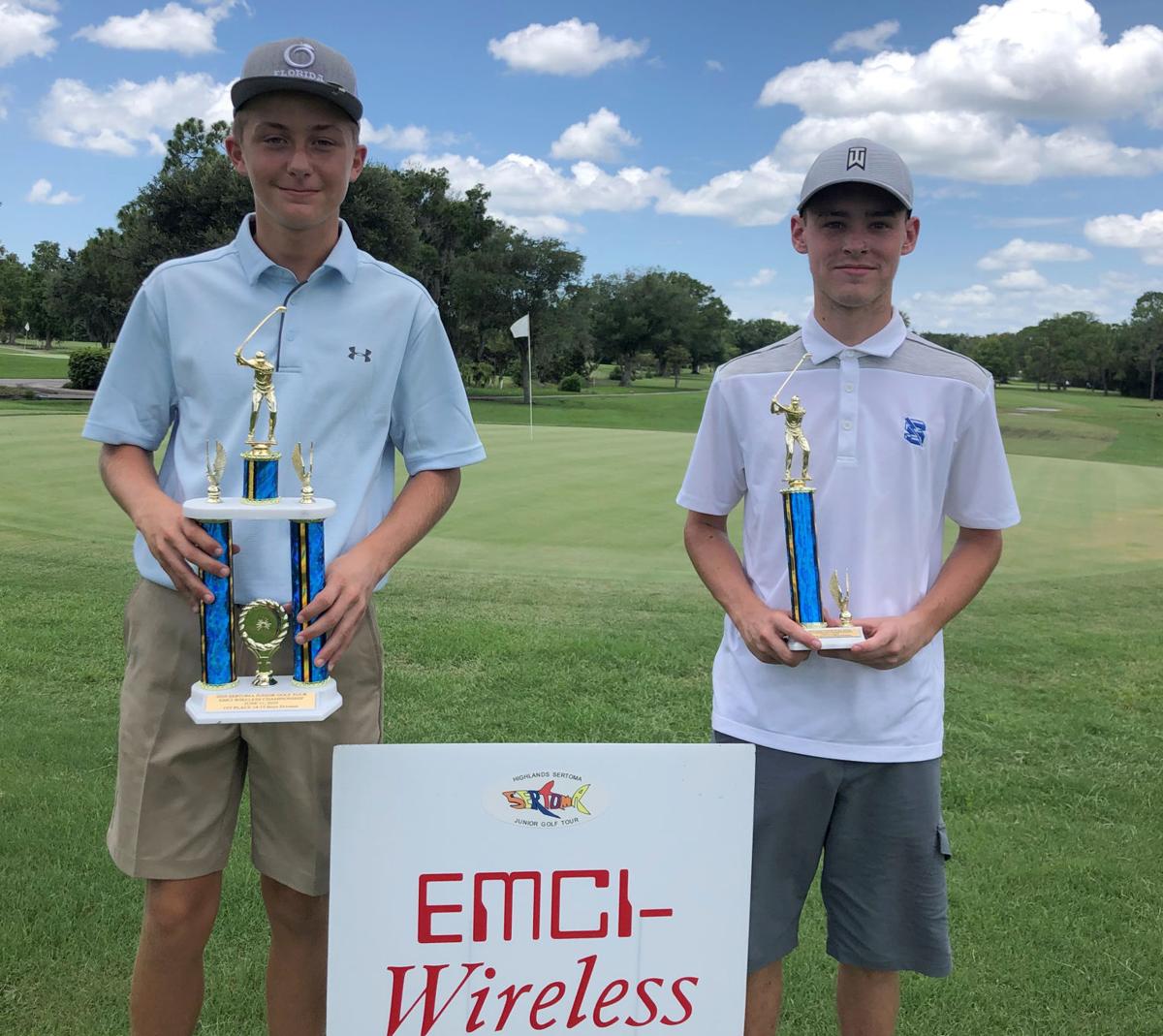 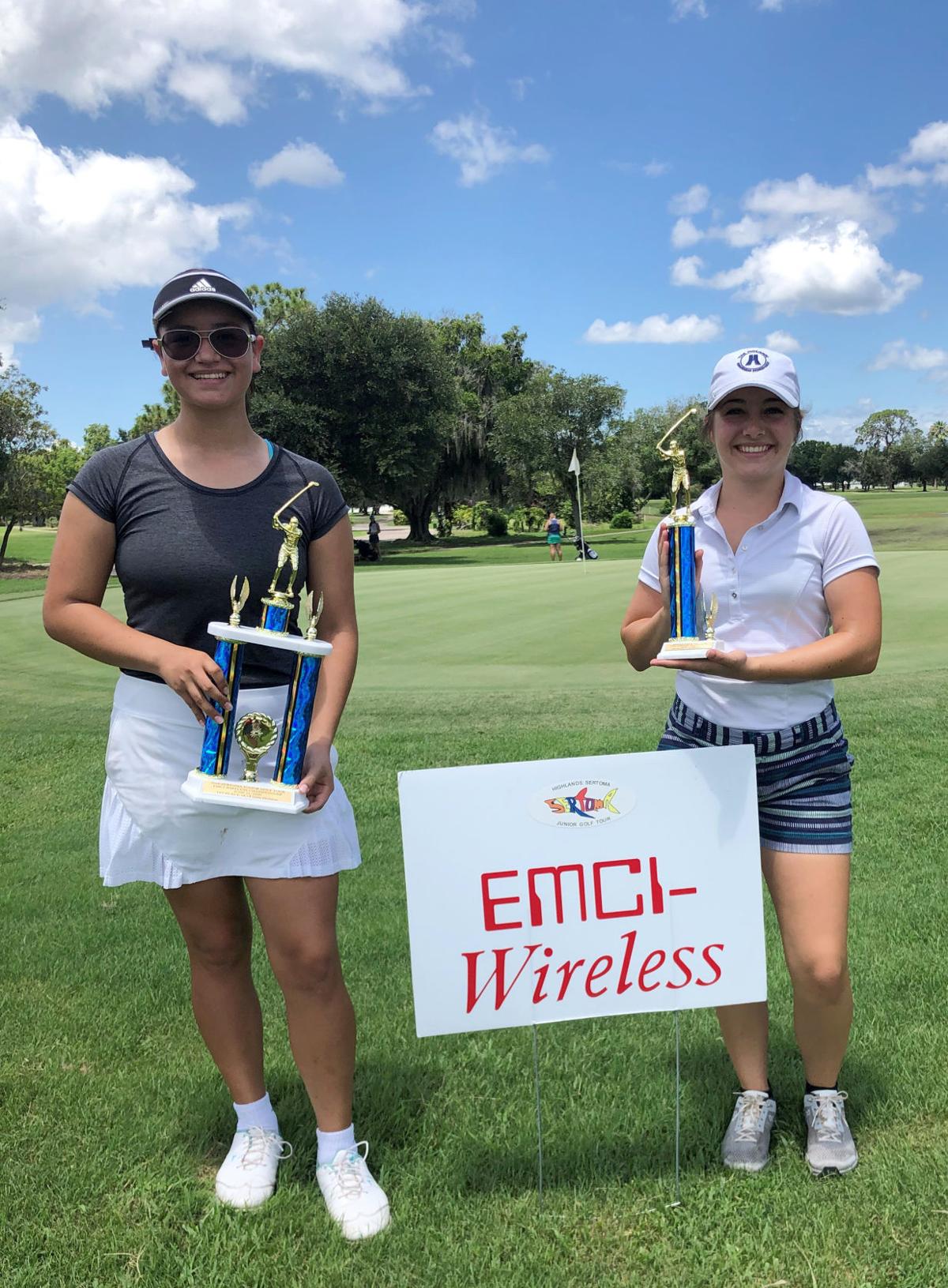 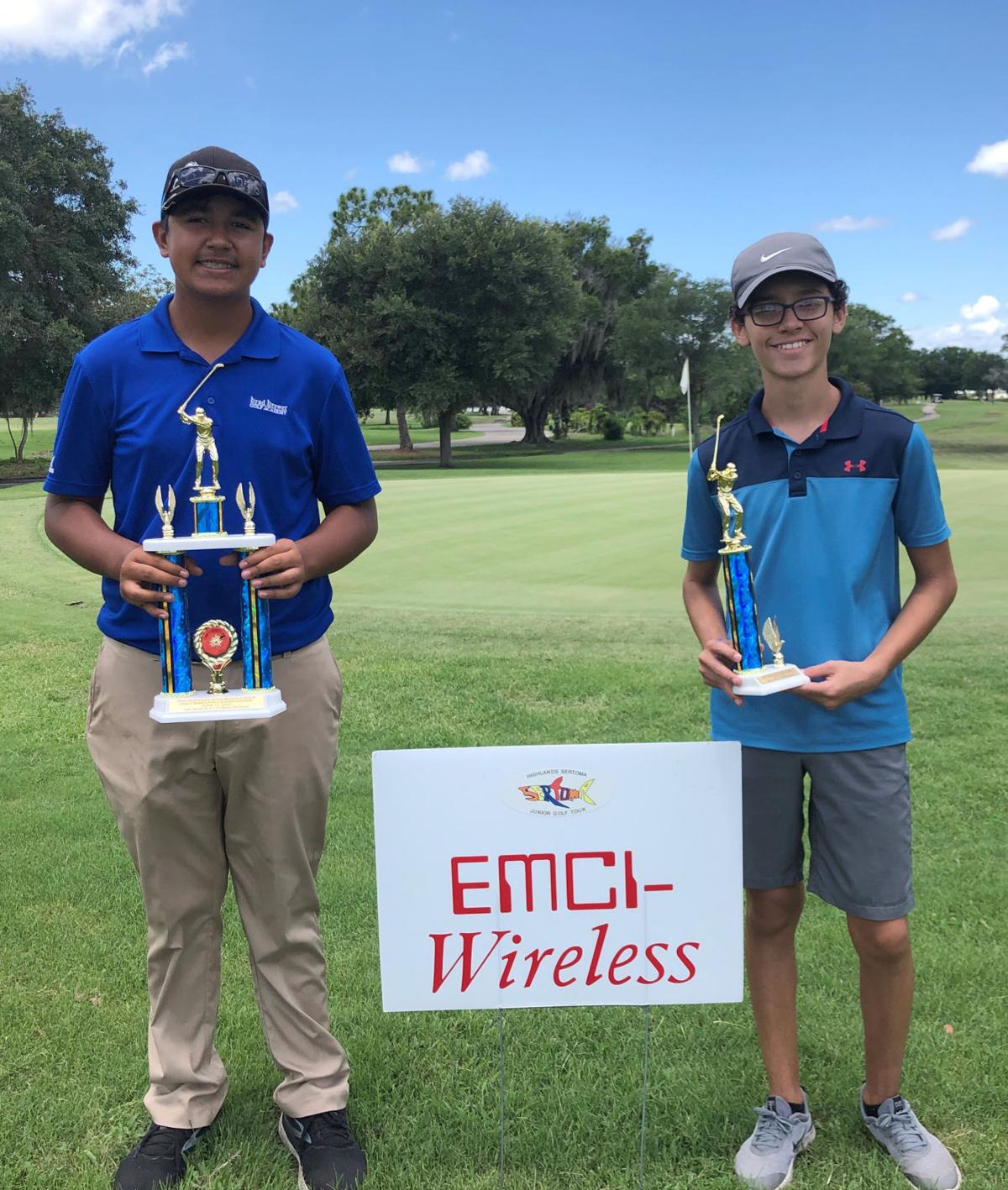 Benjamin Trevino (left) and Matthew Suarez pose with their trophies after the EMCI Wireless Championship at Sebring Municipal Golf Course. 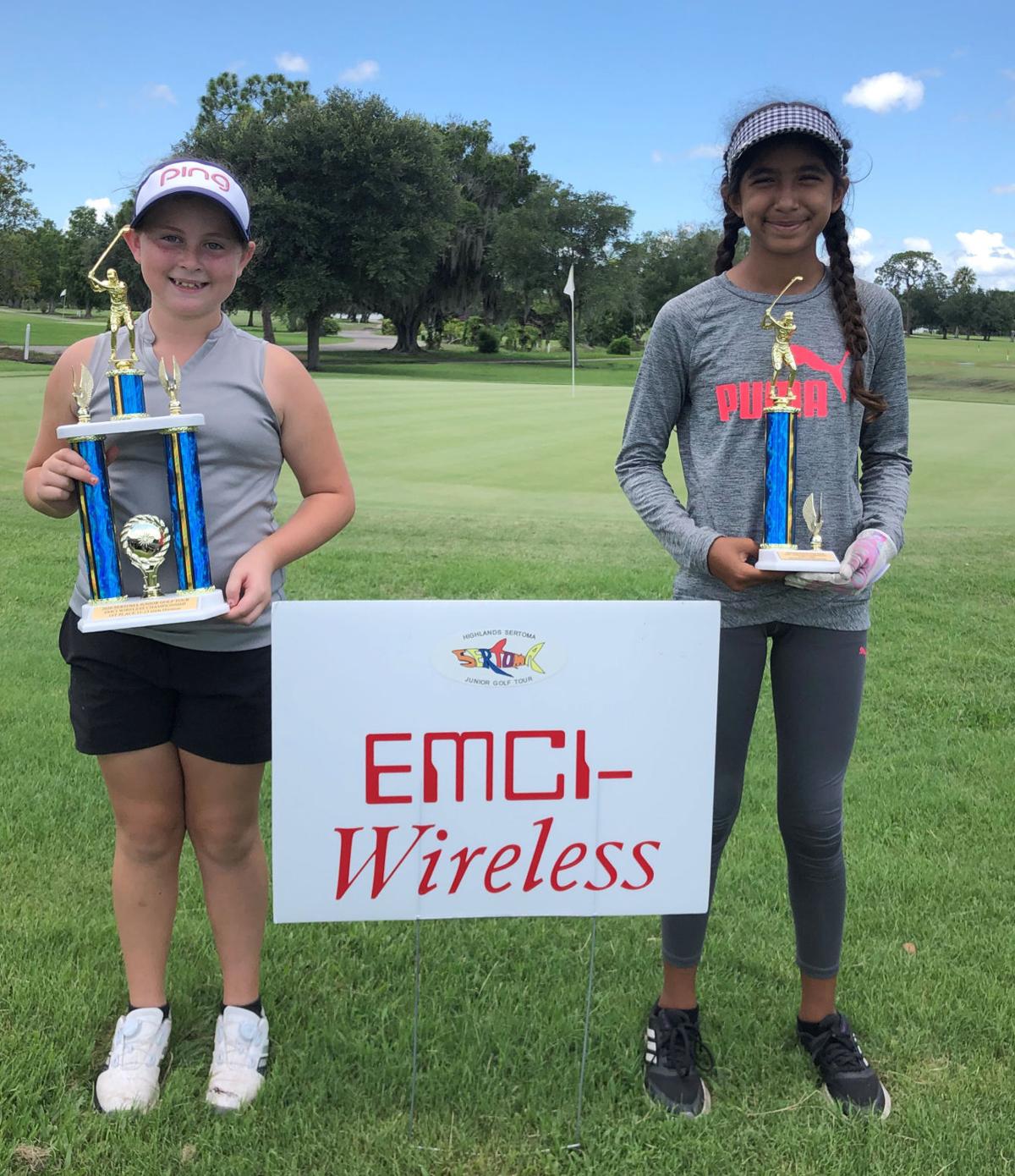 Hannah Castillo (left) and Jenesi Trevino were all smiles after finishing in first and second respectively in the girls 11-13 age division. 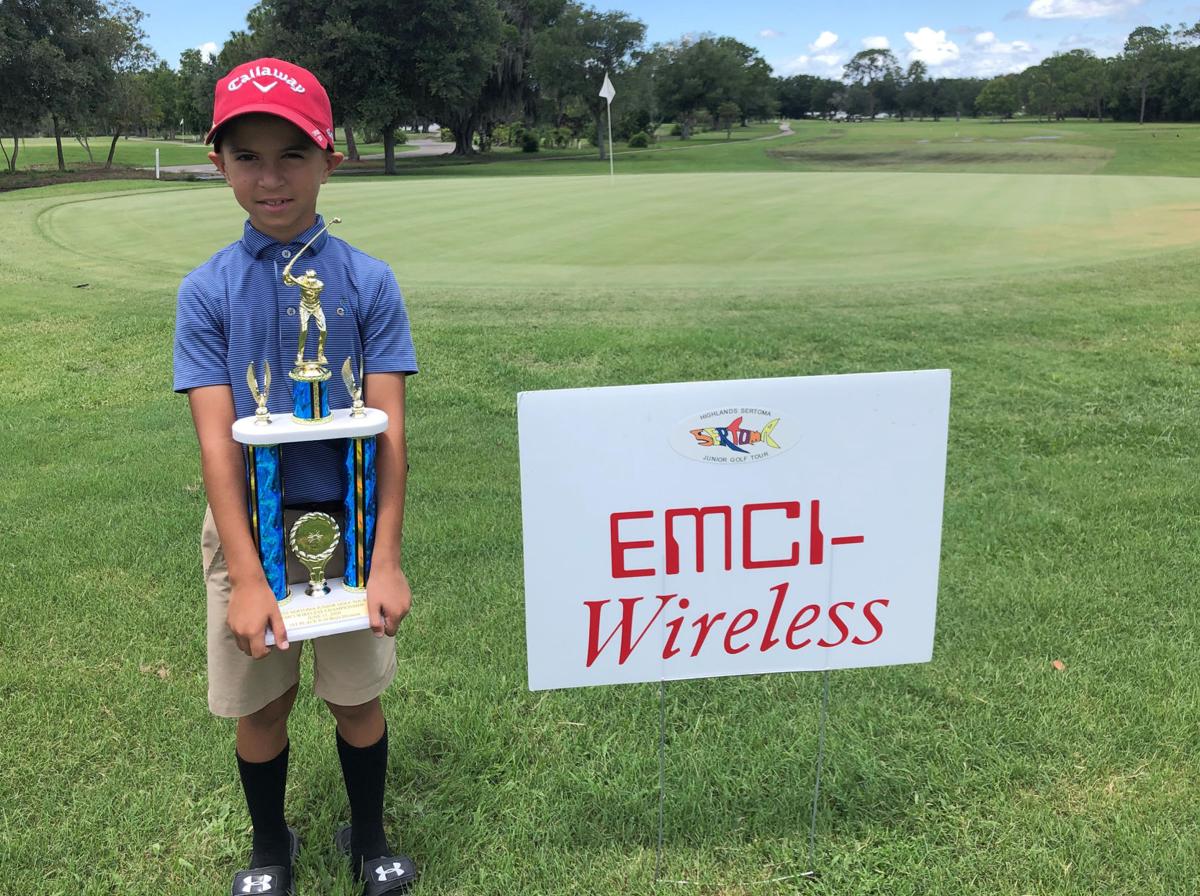 Jordan Castillo finished first in the boys and girls 9-10 age group during the third event of the Sertoma Junior Golf Tour.

Benjamin Trevino (left) and Matthew Suarez pose with their trophies after the EMCI Wireless Championship at Sebring Municipal Golf Course.

Hannah Castillo (left) and Jenesi Trevino were all smiles after finishing in first and second respectively in the girls 11-13 age division.

Jordan Castillo finished first in the boys and girls 9-10 age group during the third event of the Sertoma Junior Golf Tour.

SEBRING — The third stop of the Sertoma Junior Golf Tour was at the EMCI Wireless Championship at Sebring Municipal Golf Course. Fifty-two junior golfers participated in the two-day event.

“Wednesday night we got all of that rain and the golf course was wet for the two days of golf,” said Andy Kesling, Sertoma Junior Golf tour director. “We had to adjust, create some drop zones and account for the really wet areas, but overall it was two really good days of golf. The kids did a good job of battling not only the heat but also the very tough and muddy conditions. I’m proud of all the kids that have to walk 18 holes two days in a row; that is all the older kids and they did a great job. We had a great turnout for the two days and the numbers are up from previous years.”

“Avery Hurst played two solid days of golf,” Kesling said. “Lane Revell did not lose a match last year and won the first two events this year. He was on quite the winning streak, and Avery stepped up and played a little bit better golf than Lane did for the two days. Congratulations to Avery for getting back in the winner’s circle.”

“Trent Bray had a seven shot lead going into day two and followed it up with the best score in his age group on day two with an 89,” Kesling said. “He won by 13 shots going away so he made a statement that he will be tough to beat. Hopefully he is pushing the other kids to work on their game and get better.”

“Two in a row for Melanie Suarez so congratulations to her,” Kesling stated. “Samantha Presley and Rebecca Kesling played well. It was Rebecca’s first time playing 18 holes back to back. We were missing Taylor who won the first event. It is really exciting to see a lot of girls playing.”

“It is nice to see Benjamin Trevino playing well week in and week out,” Kesling said. “Ben has a bright future ahead of him. There are some other kids that age group that can compete with him and hopefully they are practicing and working on their game. We did a playoff for second where Matthew Suarez pared the first hole while John Roberts bogeyed. That is always a good experience for those kids. Being in a playoff is always a nerve-racking atmosphere and you don’t get that type of experience until you do it. They will both be better just because of the experience.”

“We have two really young talented girls that are both 10 years old, Hannah Castillo and Jenesi Trevino, they are both playing up,” Kesling said. “The rest of the group are girls that are fairly new to the game but are shooting decent numbers. I expect those girls’ numbers will come down as they get more experience. It is fun to go out and watch those girls. Both Hannah and Jenesi have beautiful golf swings and if they stick to it they will have a bright future. Congratulations to Hannah for shooting the two best scores in that age group.”

“The Castillo family has a lot of support from their family and play quite a bit,” Kesling added. “It will be fun to watch them grow up and get better. Hopefully they stick with it because they have a lot of talent and will hopefully play in college and who knows after that. They got started at a young age and you can see their development, which is great.”

Zoe Hout was a standout in the 6-8 boys and girls group when she made a 25 on day one and a 33 on the second day on the links for a total of 58. Owen Smith came in second with a 30 and 33, adding up to 63. Placing third was JD Scheipsmeier, who carded a 34 and 30 for a sum of 64. Isabella Morris and Faith Grant tied at 80, Nixon Bone shot an 81 and Ashlyn Wortinger came in at 83 and Kayden Albritton fired a 99. Harper Brooker, Brooke Wortinger and Emily Kate Campbell were in a three-way tie with 106 and Austin Sims had a 108.

“That 25 on day one that Zoe Hout fired could possibly be a record for Sertoma for six holes in that age group,” Kesling said. “That is pretty tremendous what she did. That 25 is one of the lowest rounds I’ve seen in that age group. That was her first victory of the year and she chose a great place to get because the two-day events are a point-and-a-half towards the end of the year standings. Owen Smith won the first two events but her winning puts her up there with Owen and I think those two will battle it out the rest of the summer. JD Scheipsmeier is not far behind and has stepped up his game and is getting better. He is starting to challenge the top spots at these events. Congratulations to Zoe on the big win; that 25 was shockingly good.”

If any kids ages 6 to 18 would like to join the Sertoma Junior Golf Tour, contact Kesling at sertomajr@gmail.com. The fourth sop of the tour takes place today at Sun N’ Lakes Golf Club.