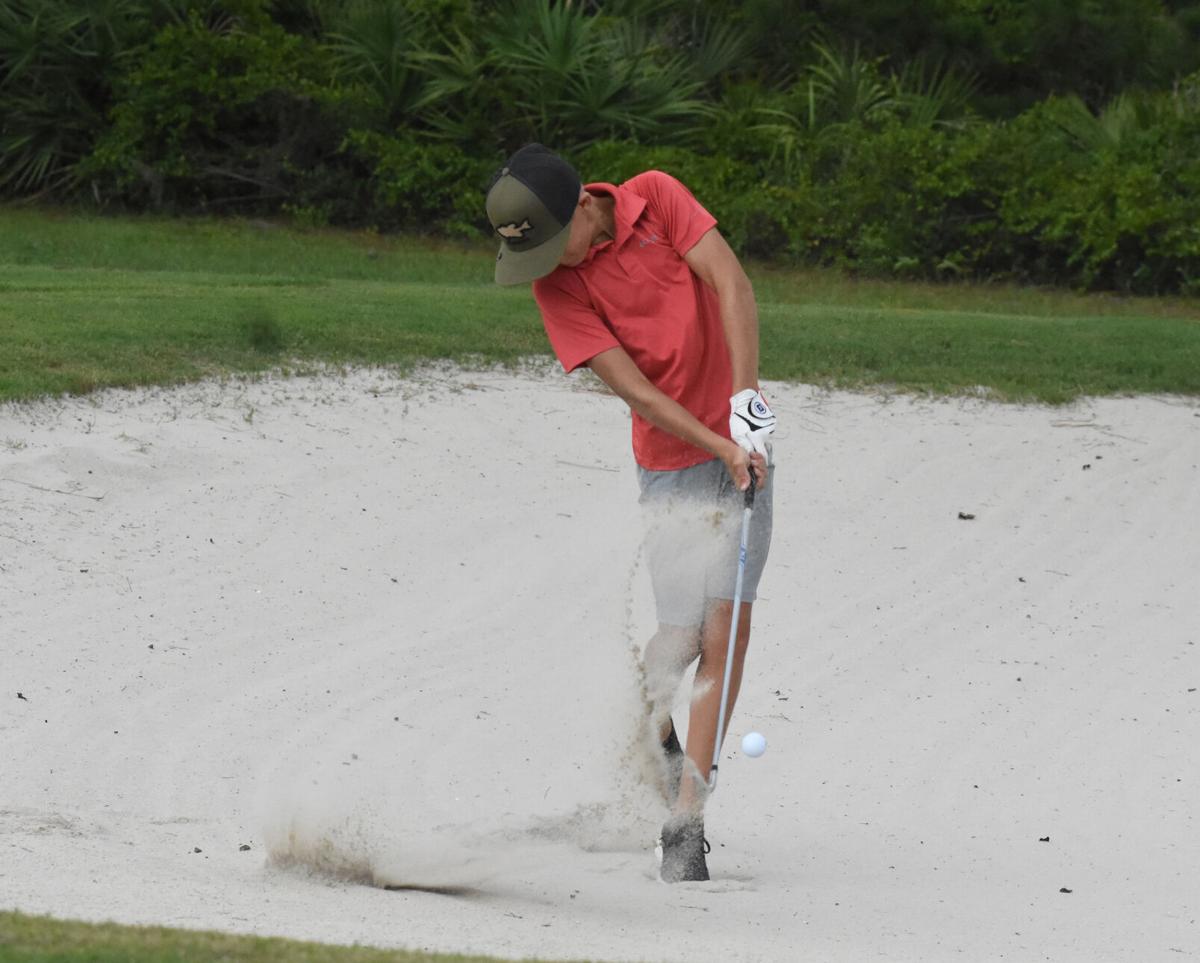 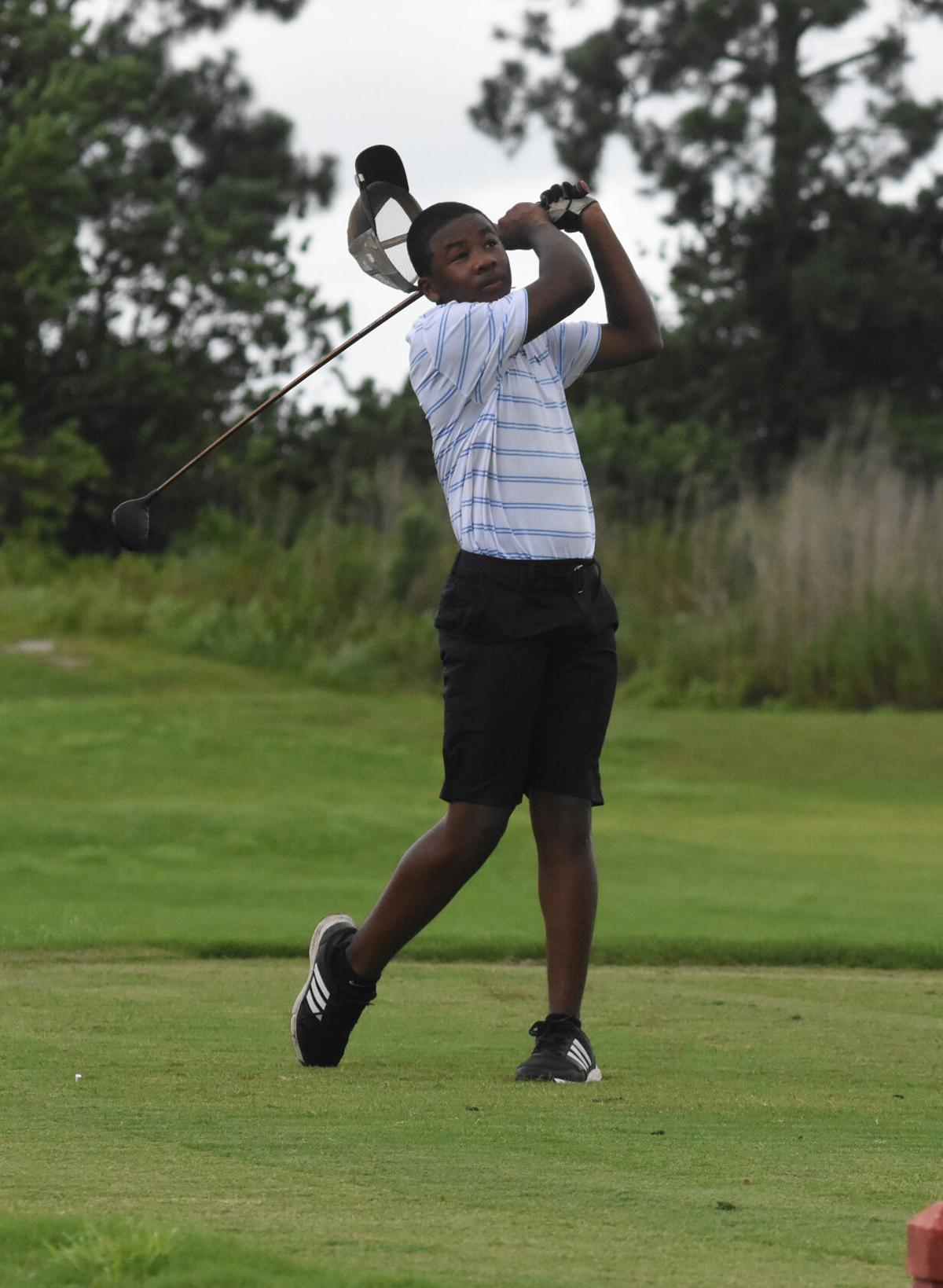 Austin Henning’s hat is blown off as he watches his ball sail down the fairway before the rain began at Highlands Ridge North. 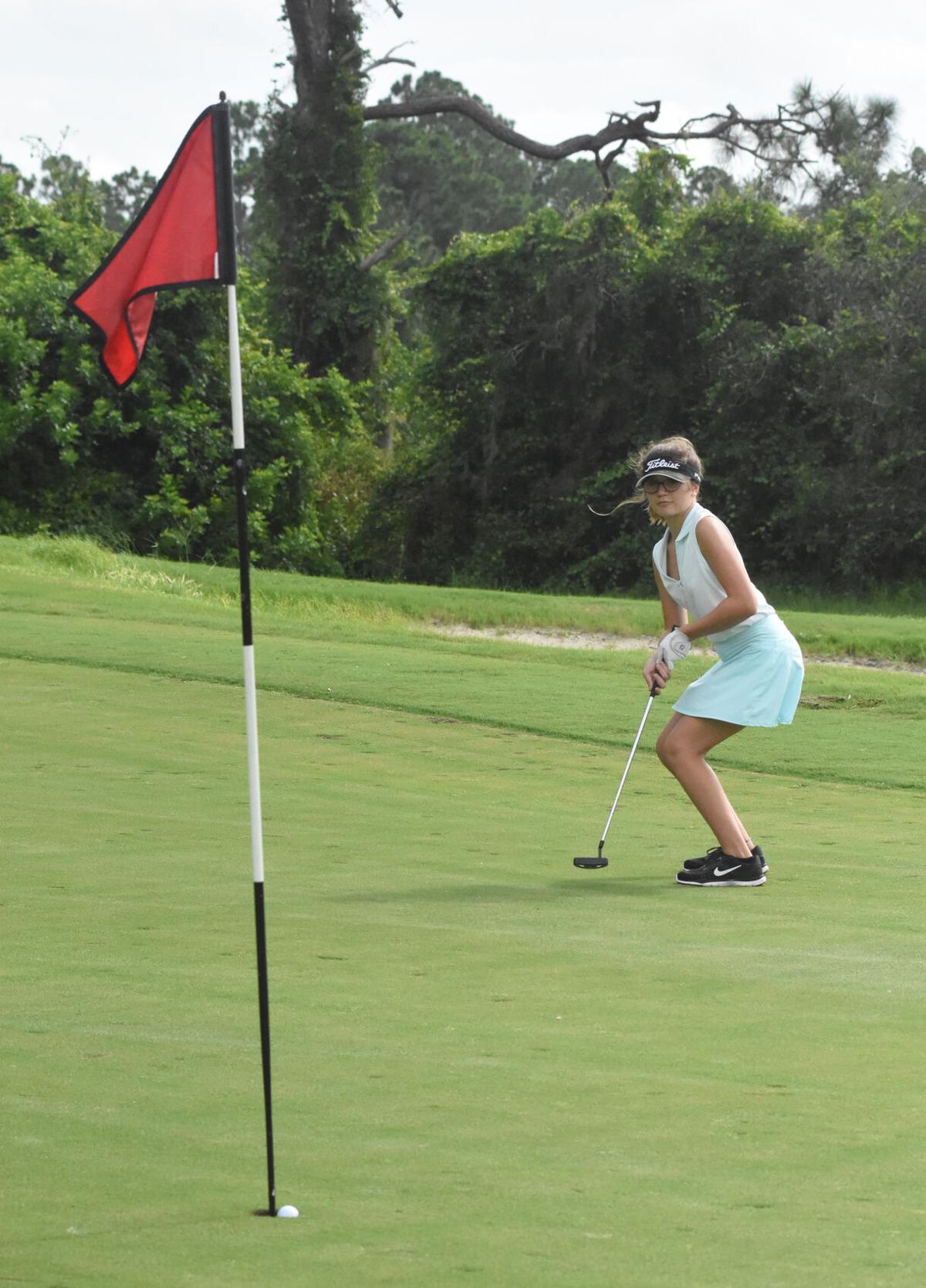 Olivia Kesling reacts as she sank a long putt during event No. 9 of the Sertoma Junior Golf Tour. 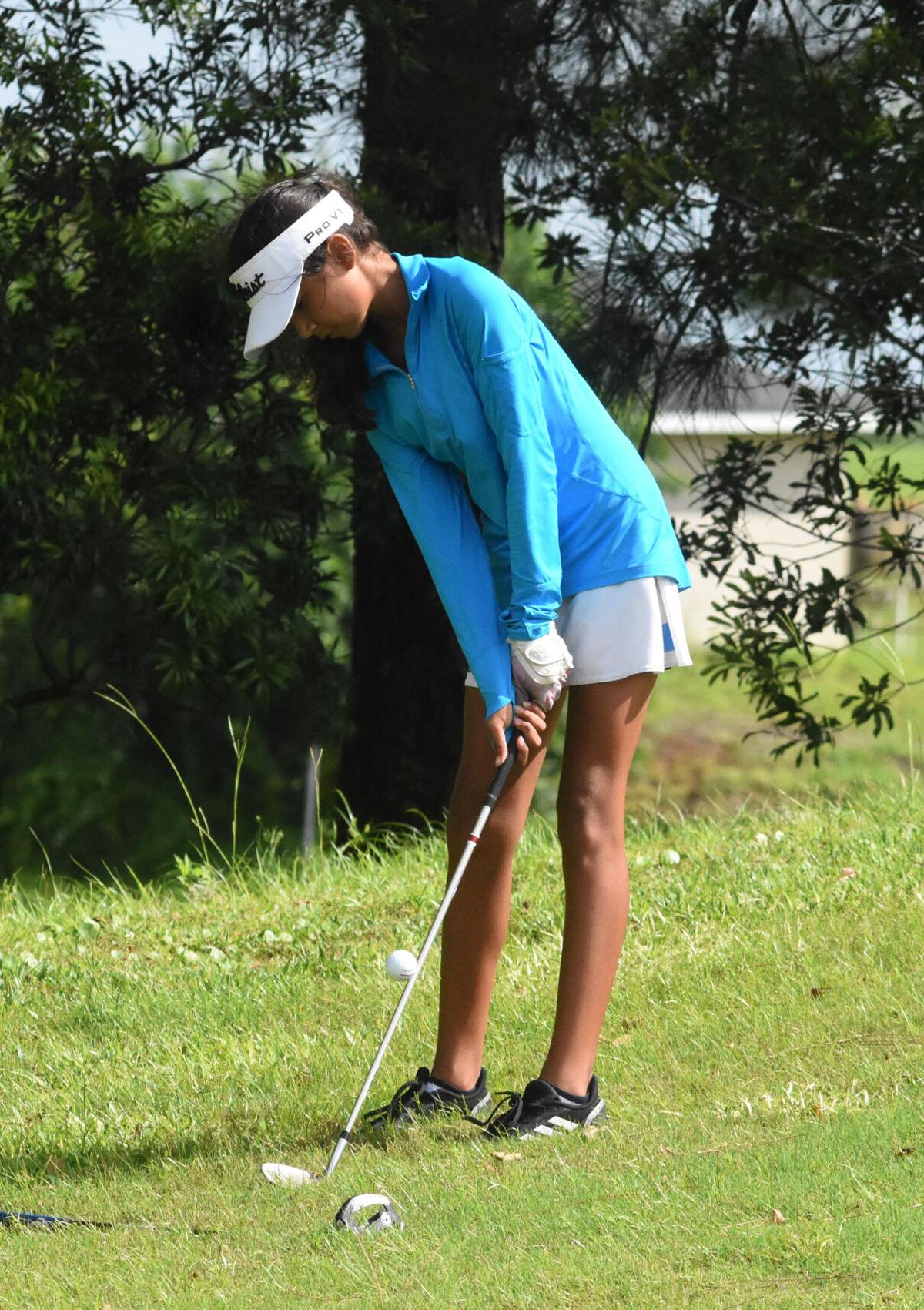 Jenesi Trevino chips her way out of the rough and onto the green at Highlands Ridge North.

Austin Henning’s hat is blown off as he watches his ball sail down the fairway before the rain began at Highlands Ridge North.

Olivia Kesling reacts as she sank a long putt during event No. 9 of the Sertoma Junior Golf Tour.

Jenesi Trevino chips her way out of the rough and onto the green at Highlands Ridge North.

AVON PARK — The Sertoma Junior Golf Tour experienced a delay at the ninth event of the series at Highlands Ridge North. Golfers and spectators ran for shelter as it began to storm and were able to finish after the storm passed. Fifty competitors battled on the links to boost their scores before the Tour Championship.

“We had about an hour delay in the middle of the round but it went well,” said Sertoma Junior Golf Director Andy Kesling. “The golf course was in good shape and we had quite a few kids playing.”

In the boys 16-18 age division, Cade Scarborough came out on top with 74 and not far behind was Beckham Donovan with 76, placing him in second. Lane Revell rounded out the top three with a 78. Robby Hill and Clay Jacobs tied at 82, Ranen Carmichael came in with 89 and James Swaford fired a 106. In the overall point standings, Revell has a commanding 31-point lead with 282. Avery Hurst is in second with 251 and Scarborough sits in third with 240.

“It was nice to see Cade (Scarborough) come out on top,” said Kesling. “He is a member here at Sun ‘N Lake so I get to see him a lot and he has worked real hard at his game. It was his first victory of the year and we are really happy and proud of him. He shot a really good number.”

Just four strokes separated the top four golfers in the boys 14-15 group. Jay Walkup placed first when he fired a 92. Brayden Smith came in second with 93 and JR Redding had one of his best rounds when he came in with 95. Jayden Bolin shot a 96, Ian Frasier carded a 100 and Kale Henderson had 106. Smith remains in the lead in the overall standings with 285, Walkup narrowed the deficit and sits in second with 276. Trent Bray is in third with 273.

“We had four kids within four shots which is awesome to see,” Kesling stated. “Congratulations to Jay (Walkup), this was his third victory of the year which moved him into second place ahead of Trent Bray. It has been a tight race between the top three and Jayden (Bolin) has been doing well in fourth place. I’m proud of those guys and JR (Redding) had his best round so far.”

Ashley Zimmerman placed first for the second week in a row in the girls 14-18 division. Zimmerman had an eight-stroke lead and carded a 77. Taylor Derr came in second when she fired an 85 and Hannah Castillo, who is only 10 years old and playing up from her usual 11-13 division, came in third place with 98. Samantha Presley shot a 100, Rebecca Kesling came in with 108, Braie Danser had 122, Lexi Luevano fired a 131, Kearsta Danser had 134, Hayli Simmons carded a 141 and Rylie Franze shot a 146. Melanie Suarez has the lead in the point standings with 279. Currently in second is Derr with 275 and Presley has 254, placing her in third.

“Ashley (Zimmerman) is a good player and will push the local girls to do better and she played a great round,” Kesling said. “She is the type of player that the other girls are aspiring to be so it is nice to have her.”

Jenesi Trevino placed first in the girls 11-13 squad when she shot a 51. In second was Olivia Kesling who fired a 55 and rounding out the top three was Selah Damron-Lovett, who carded a 69. In the overall standings, Castillo has an overwhelming 29-point lead with 300 and in second is Trevino with 271. Kesling sits in third with 242.

“Hannah (Castillo) moved and finished third in the 14-18 division and she is only 10 years old,” explained Kesling. “Jenesi (Trevino) is a good player and is just a step behind Hannah. Olivia is getting better.”

In the boys 11-13 group, Marquez Angeles fired a 38 placing him in first. There was a tie for second when Jordan Castillo, who played up from the 9-10 division, and John Roberts each carded a 43. Benjamin Trevino had 47, Alex Kruschwitz shot a 49, Austin Henning made a 51, Daylon White and Matthew Suarez tied at 53. Tanner Simmons came in with 56 and Tye Gross fired a 60. Trevino held on to his first place position in the overall standings and has a score of 294. Angeles is in second with 260 and Matthew Suarez is currently third with 237.

“Marquez (Angeles) had another good round and is at the top,” Kesling said. “Jordan (Castillo) played up and tied for second. This was his first-time walking out of the cart so I was really proud of him. There are several good players in that age group.”

Devin Wortinger shot a 47 placing him in first in the boys and girls 9-10 division. Hot on Wortinger’s heels was Liam McCann who was just one stroke behind with 48. Jadiel DeJesus came in third with 60. Jordan Castillo, who played up during event No. 9, has an outstanding 29-point lead with a score of 294. Wortinger is in second with 266 and Liam McCann sits in third with 254.

“Devin (Wortinger) is back on top in the winner’s circle and it is good to see him playing better,” stated Kesling.

All season long Zoe Hout and Owen Smith have been neck-and-neck and tied once again. Hout and Smith each carded a 30. JD Scheipsmeier fired a 33 placing him in third. Nixon Bone had 40, Ashlyn Wortinger came in with 43, Isabella Morris had 45, Kayden Albritton and Garrett Parnell tied at 46. Luke Lovett shot a 47, Austin Sims came in with 53 and Brooke Wortinger fired a 54. Hout is in first place overall with 294, Smith is currently in second with 282 and Scheipsmeier is in third with 234.

“Zoe (Hout) and Owen (Smith) tied for the third time in first place,” said Kesling. “They have been battling all year and Zoe has a 12-point lead on Owen going into the Championship event. That is a tough lead to overcome. It is good to see that competition and I’m looking forward to the tour championship where we will see a good battle between the two of them.

The junior golfers have a couple of weeks to get ready for the Tour Championship that will be held on Saturday and Sunday August 14-15 at Sun ‘n Lake Golf Club.

“This is a good time for the kids to practice and gear up,” said Kesling. “They have played nine events so they should have a good idea where their game needs improvement. If you are struggling or weak in an area you should put the time and effort into improving. Hopefully everyone is practicing and turning those weaknesses into strengths.”