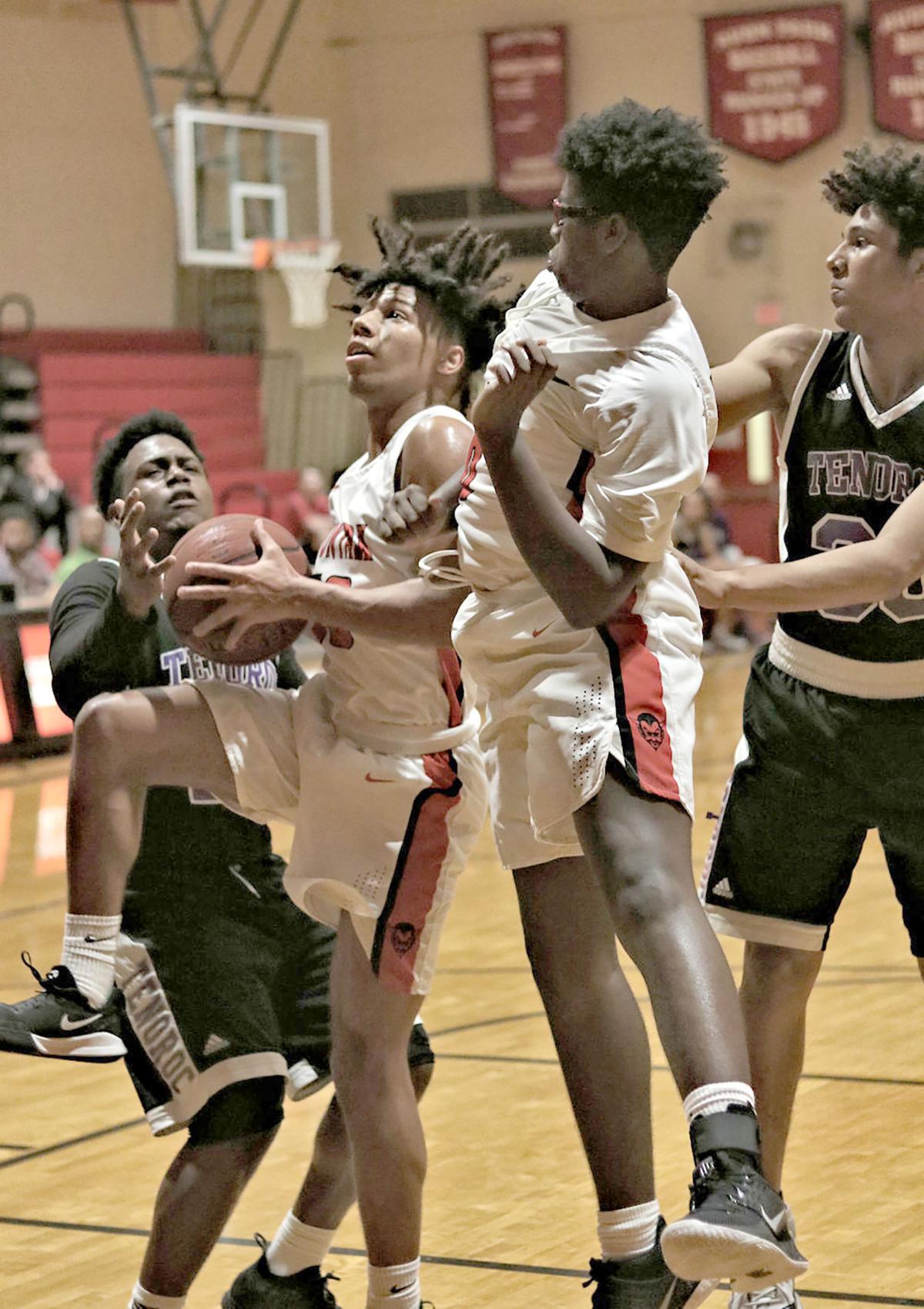 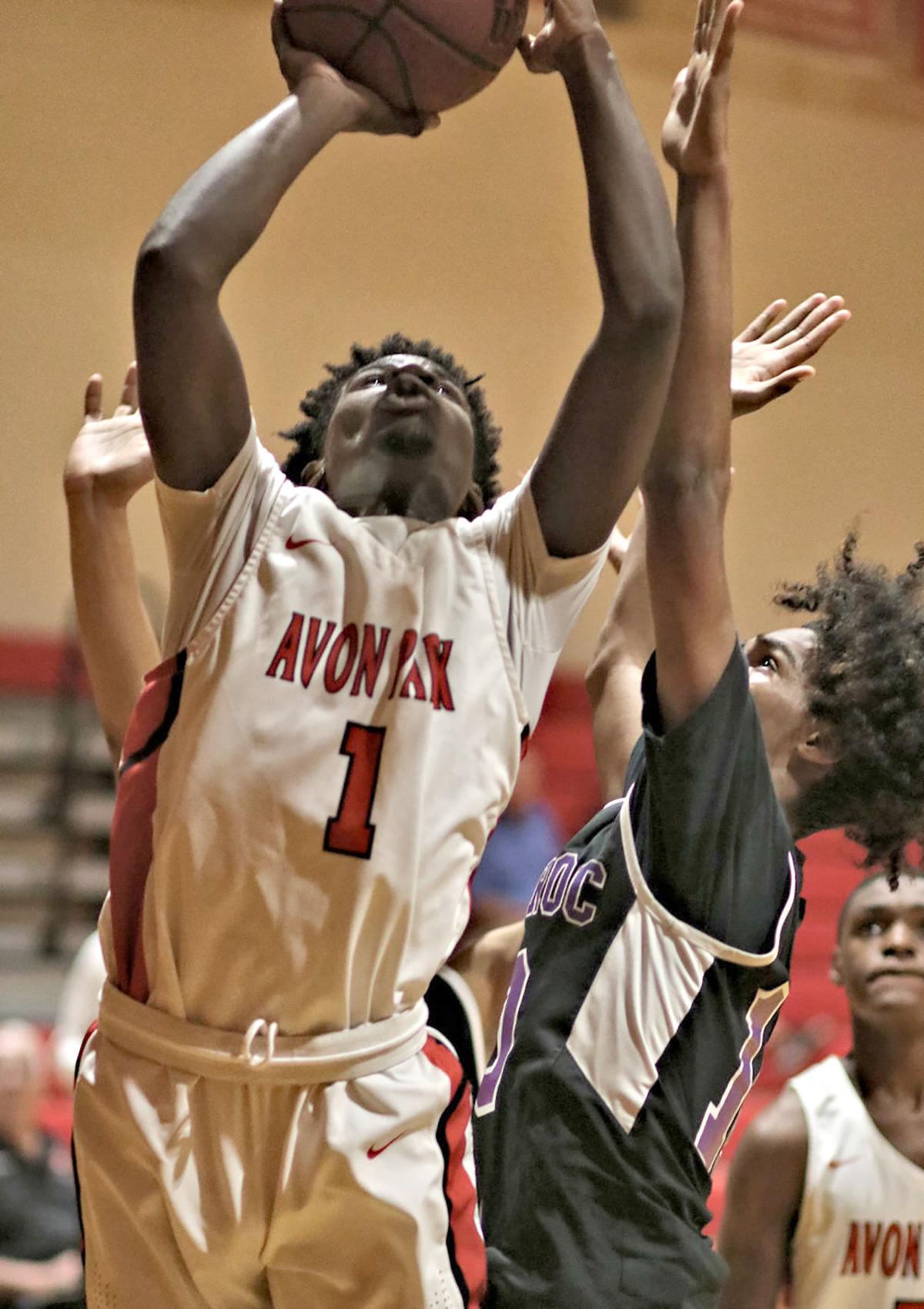 Avon Park’s Kyron Martel (1) makes a power move to the basket against Tenoroc. 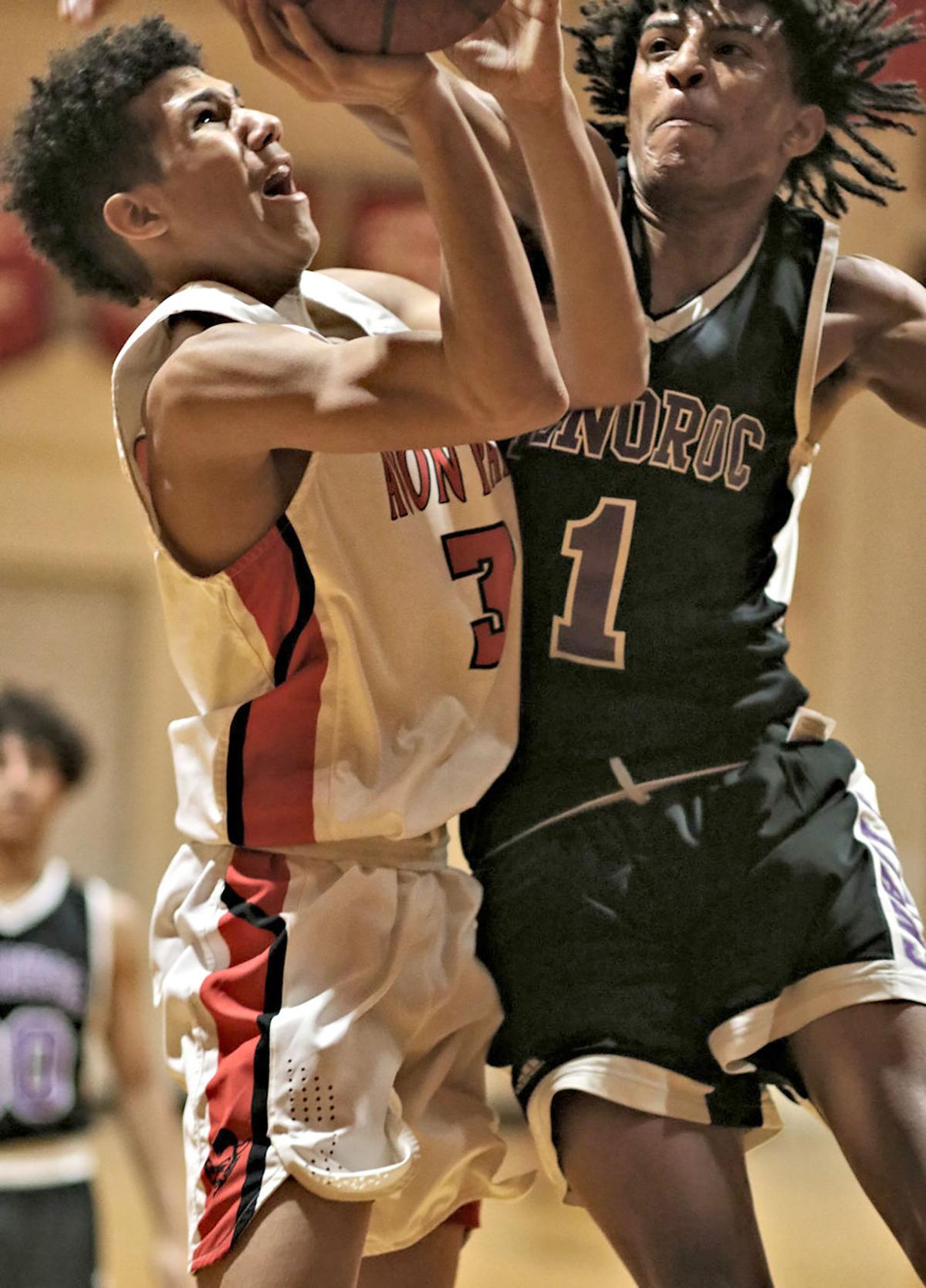 Avon Park’s Devontae Powell (3) gets fouled hard by the Tenoroc player as he tries to drive to the basket.

Avon Park’s Kyron Martel (1) makes a power move to the basket against Tenoroc.

Avon Park’s Devontae Powell (3) gets fouled hard by the Tenoroc player as he tries to drive to the basket.

AVON PARK – The Avon Park Red Devils (8-13) season came to an abrupt end in the first round of the Class 4A-District 11 tournament. The Red Devils were upset by the Tenoroc Titans (4-18) 71-55 at home on Tuesday night.

After a fifteen minute delay to wait for the Titans to show up, the Red Devils seemed fine as they jumped to a 4-3 lead on a pair of free throws by Kyron Martel and a bucket by Malcolm Dewberry.

Tenoroc forged ahead with a pair of baskets, 7-4, as Dewberry kept the Red Devils within a point with his second basket to make the score 7-6 in the first six minutes of a low scoring game.

The Titans went on a five point run to make the score 12-6 before Dewberry drained a three from the left side to end the first quarter with Tenoroc leading 12-9.

A quick basket by Tenoroc to start the second followed by a three pointer by Avon Park’s Jamarion Davis cut the Titan’s lead to two at 14-12.

First nine minutes saw both teams struggle to get the offense moving and the Red Devils seemed to be slowly losing ground in the current momentum.

With six minutes left in the second, that steady stream became a waterfall as the Tenoroc Titans scored 20 unanswered points and they did it in all facets of the game.

The Titans controlled the boards, scoring on offensive tip-ins, offensive rebounds converted into baskets, blocked shots, and a dunk while the Red Devils saw their shot attempts sail high, miss their mark completely or bounce harmlessly off the rim to go along with the numerous turnovers.

It took the Red Devils five minute to break the Titans scoring spree when Dewberry made a basket with :53 second left in the half to make the score 34-14. Davis added a three with ten seconds left as Avon Park went into the half trailing the Titans 34-17.

Tenoroc continued to roll, matching or surpassing what Avon Park tried to do and eventually stretched their lead to twenty at 47-27.

Avon Park made an 8-2 run to end the third as Devontae Powell connecting from beyond the arc as the Red Devils sliced a smidgeon off the Titan lead at 49-35. The Red Devils again hurt themselves getting called for a technical, in which Tenoroc made both and got the ball back to convert a basket to reestablish an 18 point lead, 53-35, at the end of the third.

The Red Devils tried to rally in the fourth quarter, scoring 20 points, but the Titans kept pace with 18 of their own as Avon Park fell to Tenoroc 71-55.

Martel and Dewberry led the Red Devils with 14 points each, Powell scored 8 while Davis and Kamarri McGhee each posted six points in the loss.