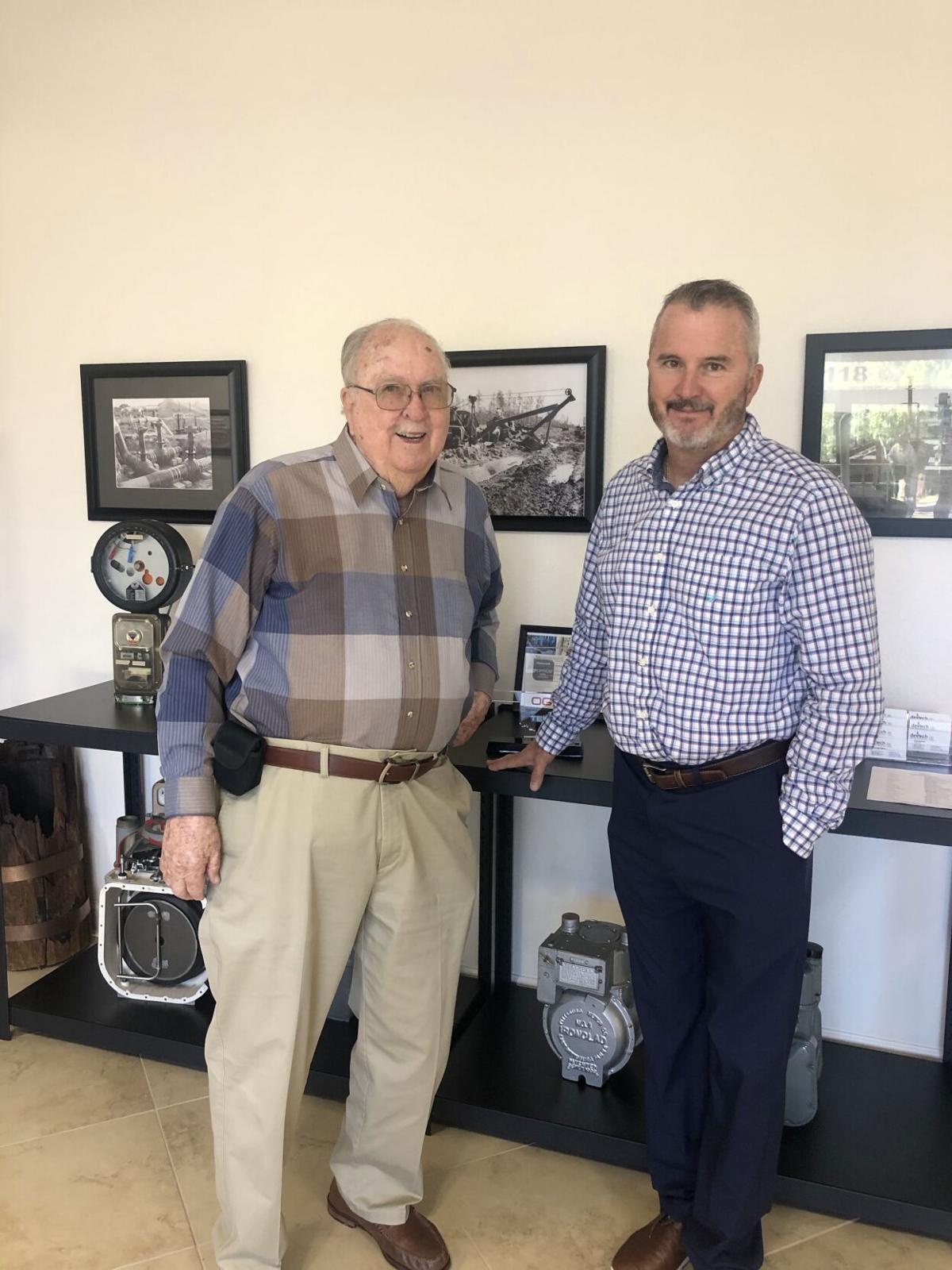 Patriarch Paul Devlin with his son, Charles, president of devtech. 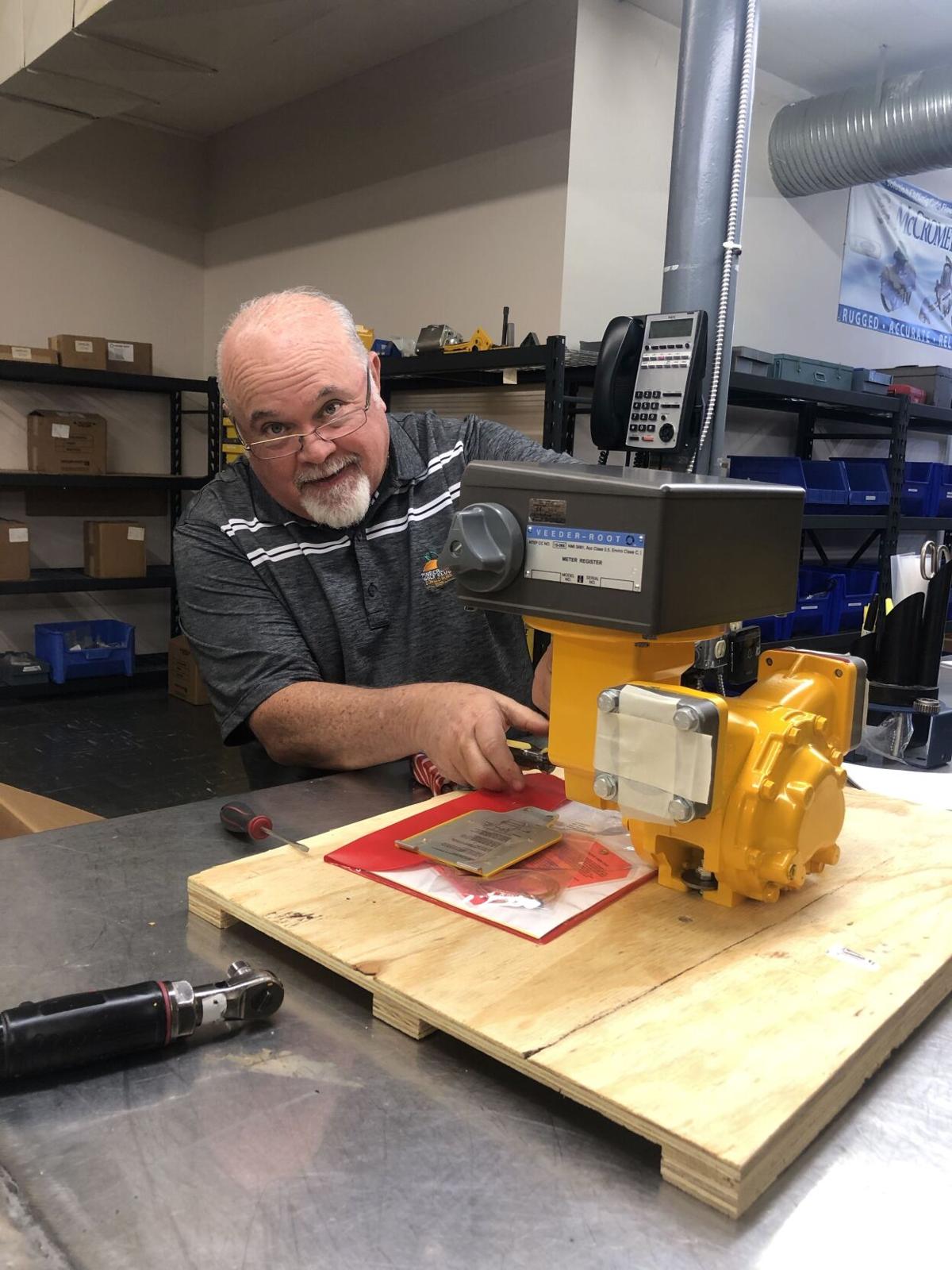 You will often find Avanti President Tim Devlin working on a project rather than sitting behind his office desk. 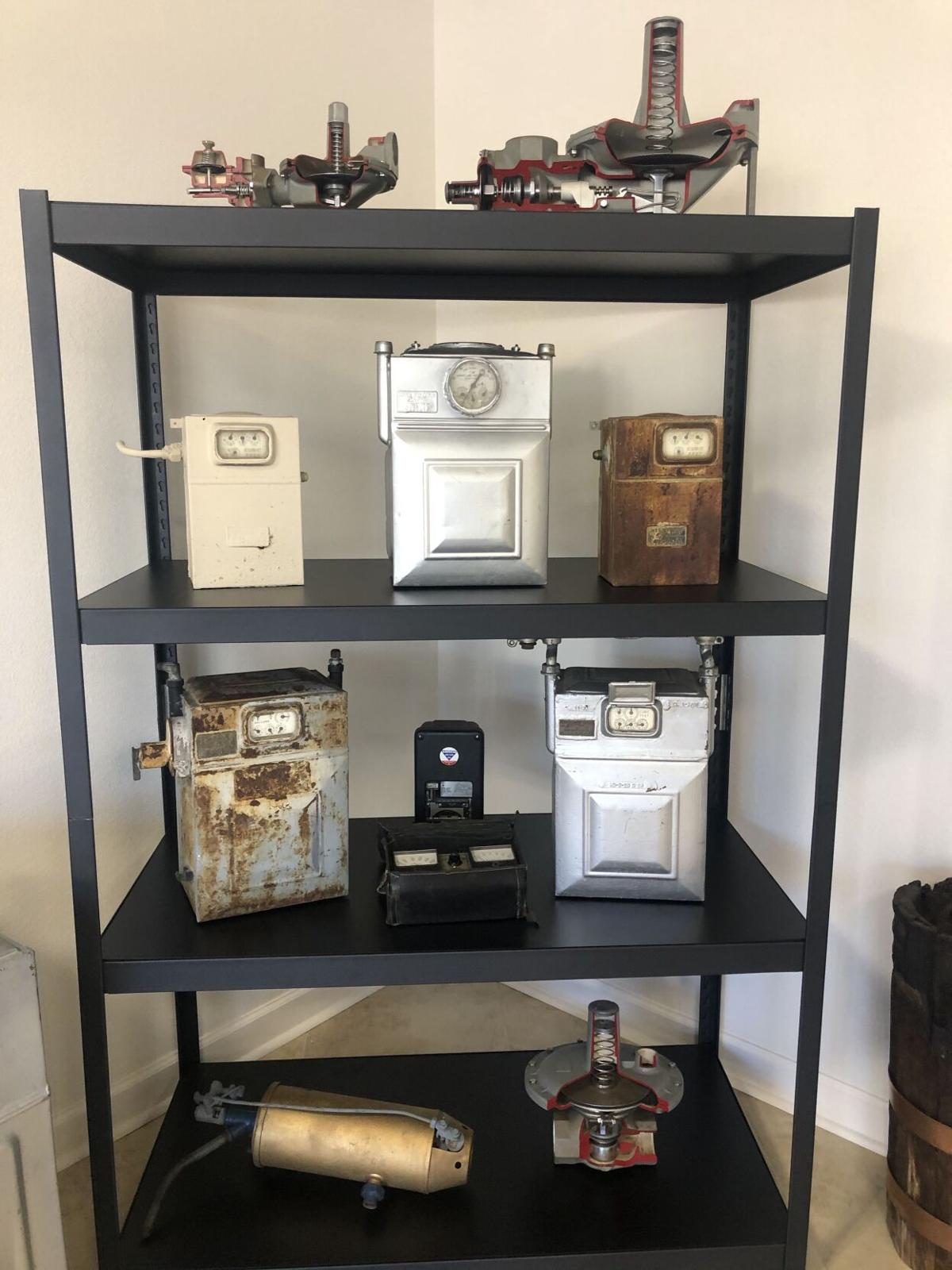 A history of meters is on display at devtech. 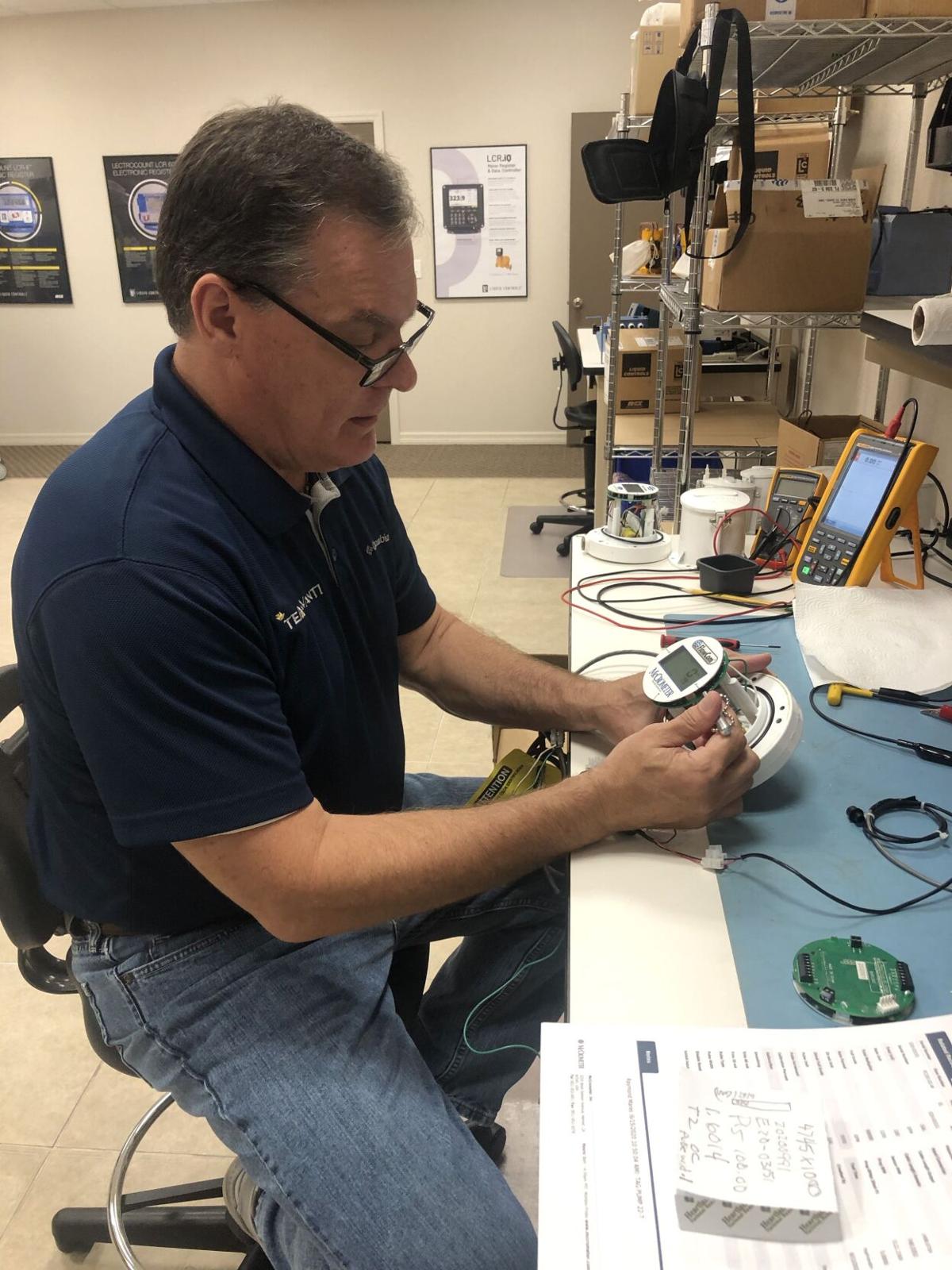 Mark Whalen is Avanti’s vice president of operations and a longtime employee of 22 years. Here, he programs an electronic register for a water flow meter for a water utility.

Patriarch Paul Devlin with his son, Charles, president of devtech.

You will often find Avanti President Tim Devlin working on a project rather than sitting behind his office desk.

A history of meters is on display at devtech.

Mark Whalen is Avanti’s vice president of operations and a longtime employee of 22 years. Here, he programs an electronic register for a water flow meter for a water utility.

AVON PARK — The motivational guru Anthony Robbins has two powerful phrases that have guided the lives of people who have ever attended his seminars.

One is “Success Leaves Clues,” and the other is, “If you can’t, you must!” The Paul and Justine Devlin family of Avon Park epitomizes both these phrases. Combined, they created fantastic results for the company they founded. One is Avanti, which began in 1977, and the other, devtech, started by their son Charles in 2011. They are located next door to each other on South Lake Avenue in Avon Park.

Avanti is in a water meter business, serving the Florida water measurement and control market providing engineered products and service. Devtech is in a gas meter business, focusing on natural gas, propane gas, power and industrial markets. They are Florida’s leading providers of measurement and control products like meters, valves, filters and more.

Besides being a distributor of products from over 30 companies like Honeywell, Ashcroft, Badger Meter, SIGMA and Ibron they offer in-house capabilities for onsite testing, repair, calibration maintenance, and technical support for everything they sell. Founder Paul believes that price is often not the reason people make a purchase. “They want to know that you can deliver and support them.” Avanti and devtech do that well.

A few of their customers include People’s Gas, Florida Public Utilities, Florida Gas Transmission as well as municipalities in Gainesville, Tallahassee and Pensacola.

Avanti’s mission statement sums up their philosophy. They are here to serve their various markets with available knowledge, capabilities and products to assist end users to accomplish their assignments and to be a witness of the principles of love and charity. Avanti is Italian for “Go Forward.” The conference room at Avanti has over 30 plagues honoring their commitment to the industry.

Like devtech, Avanti provides products and services to it customers: water utilities, municipalities, citrus and truck farmers with Badger meters, McCrometer propeller and electronic flow water meters, and golf course meters for courses like Pinecrest, River Green and others throughout the state.

The companies are a family affair with Tim Devlin, 55, president of Avanti as well as part owner of Pinecrest Golf Club and Sandhill Grill. Tim said he wanted to be a state trooper, but his dad talked him in to becoming Avanti’s first employee.

Paul said, “Tim is easy going, but he gets things done. His staff just love him.”

Charles Devlin, 51, is president of devtech and a part owner of Steel Blue Fabrication.

Another son, Chris, who now lives in Texas, was instrumental with his computer knowledge in developing the companies’ communication systems.

Stephanie Devlin, Charles’ wife is vice president of devtech and is responsible for all company travel, events and trade shows.

Their daughter, Teresa Hoffman, is in charge of communications and marketing. Teresa’s husband, Jake Hoffman, helps round out the extended Devlin family.

Paul and Justin Devlin have two daughters as well. Helen Sourini works in St. Petersburg and is a supervisor of Title 1 teachers in Pinellas County and Dr. Michele Heston is Dean of Health Services at South Florida State College. Heston’s son, John Paul Heston, also works for the family business.

Justine tells the story that one day when Chris was a child she saw him sitting seemingly idle. She asked him what he was doing. He said, “I’m just sitting and thinking.” Years later he told his mom, “Now I get paid to think.” Today he is a process chemical safety engineer with the International Celenese Company in Corpus Christi, Texas and earned the status as “fellow.”

The family, besides being successful business people, also follow in the footprints of their father by giving back to their community. Charles, for instance, helped start and continues to serve “Avon Park Champions Club” with Ronnie Jackson. The club works to create a championship environment in Avon Park by honoring the past and supporting local academic institutions and athletic programs. Since 2012, the group has held a fund raising dinner to honor past students, faculty, staff and citizens naming them to their Hall of Fame. To date, over 30 people have been inducted.

Paul helped “Rebuilding Together” fix homes for the needy. After one hurricane they rebuilt over 60 roofs and built handicapped ramps. He was also instrumental in beginning the local “Meals on Wheels” program. He is a past honoree as Avon Park’s Rotarian of the Year. The Palms Foundation of Sebring has honored him as their chairman. Five years ago, the Devlins began the Heartland American-Israel Initiative, which supports our longstanding relationship with Israel. Justine also once served on the Avon Park City Council.

The senior Devlins started Avanti with little money. They decided to live the phrase, ”If you can’t, you must.” People believed in them and their dream, loaned them start-up money and the two companies off Main Street in Avon Park are a testimony of their belief in themselves, each other and God.

Justine said, “A friend loaned us $5,000, which we never thought we could repay, but he had trust in our abilities.”

“We began in our garage as distributors. The companies we represented shipped direct so we did not have need to warehouse inventory,” Paul said. He took his degree in engineering from Georgia Tech and used it as his starting point to success.

The family are devout Catholics and you experience their faith in the way they serve their customers. Their mission statement speaks their beliefs.

When asked why he chose Avon Park rather than Tampa where he was born, he said that his uncle lived here and owned a Coca Cola bottling company. They bought a home here but rented it while Paul worked out of Chicago.

“I always visited and loved to attend the Sebring races,” Paul said. “We finally settled here as a good place to raise a family and begin our business. Now the whole family lives close to each other.

To understand what makes a man a wonderful human being, you need to realize what means the most to him or her. When interviewing Paul Devlin, now 85, tears welled up in his eyes when he spoke of his work with “Rebuilding Together.”

He said, “That work was one of the most fulfilling things I have done in my life.”

That speaks loudly of him, his wife, the company, the family and the community that Paul and Justine Devlin have created. They are a couple who exemplifies the meaning of “Success leaves clues” and “If you can’t, you must.”

According to Paul, “Our success would not have happened without the support and love of Justine and how she supported all our family.”