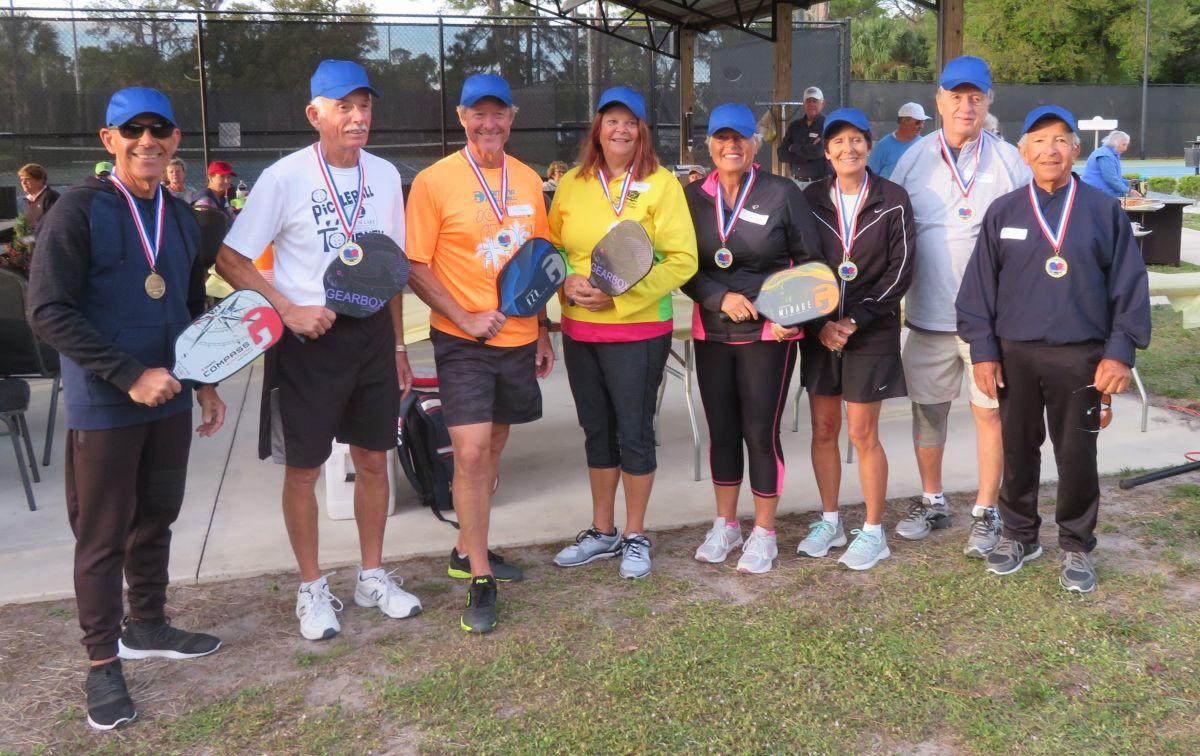 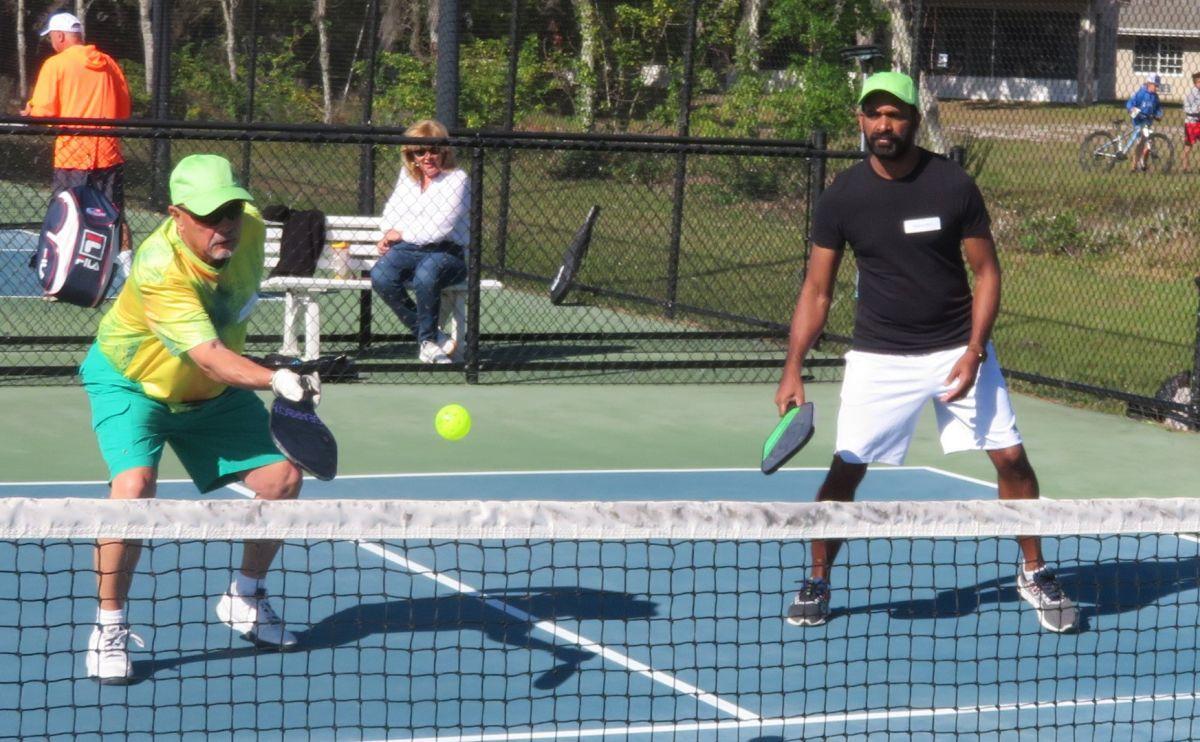 Ross Myles, the oldest player in the tournament, returns a shot with his Lime-A-Beans partner Mahender Yellu looking on. 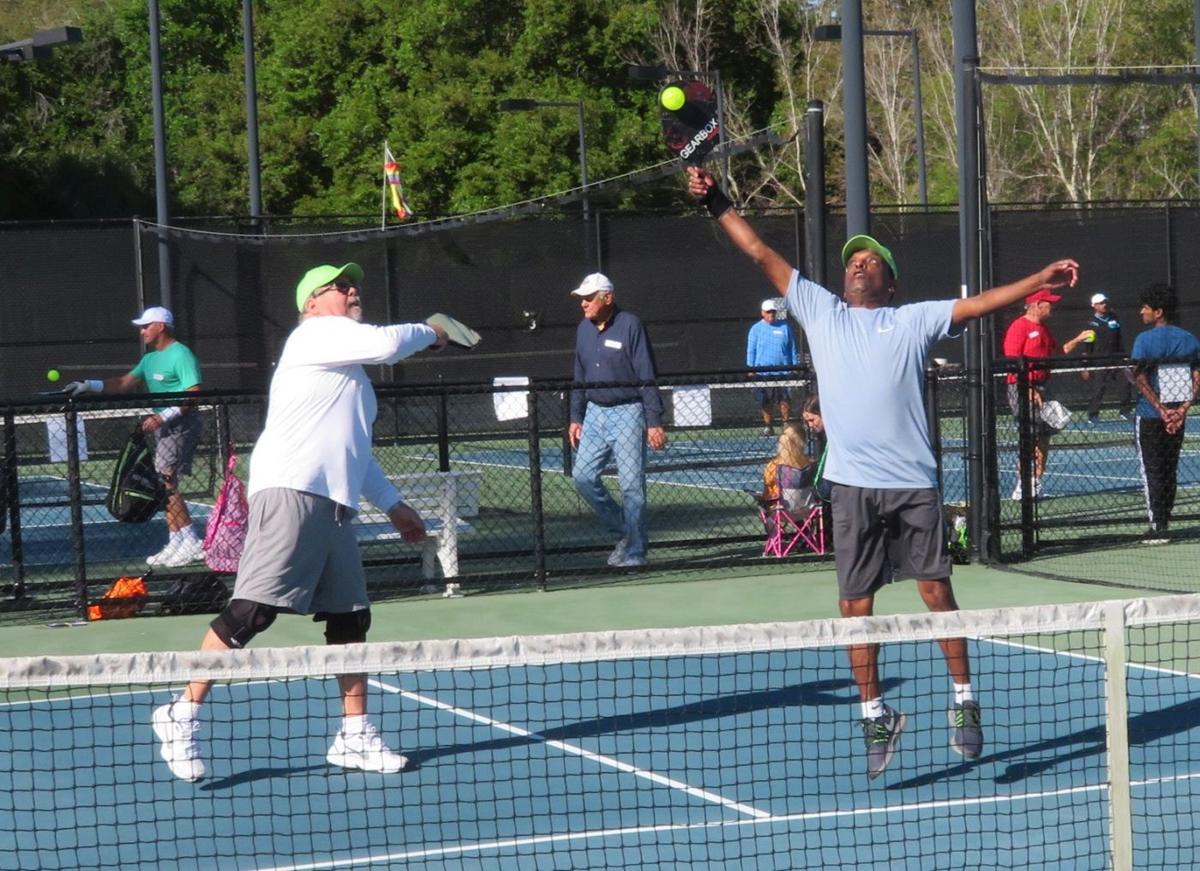 Tom Mudge and Sree Chala are both ready for the return. 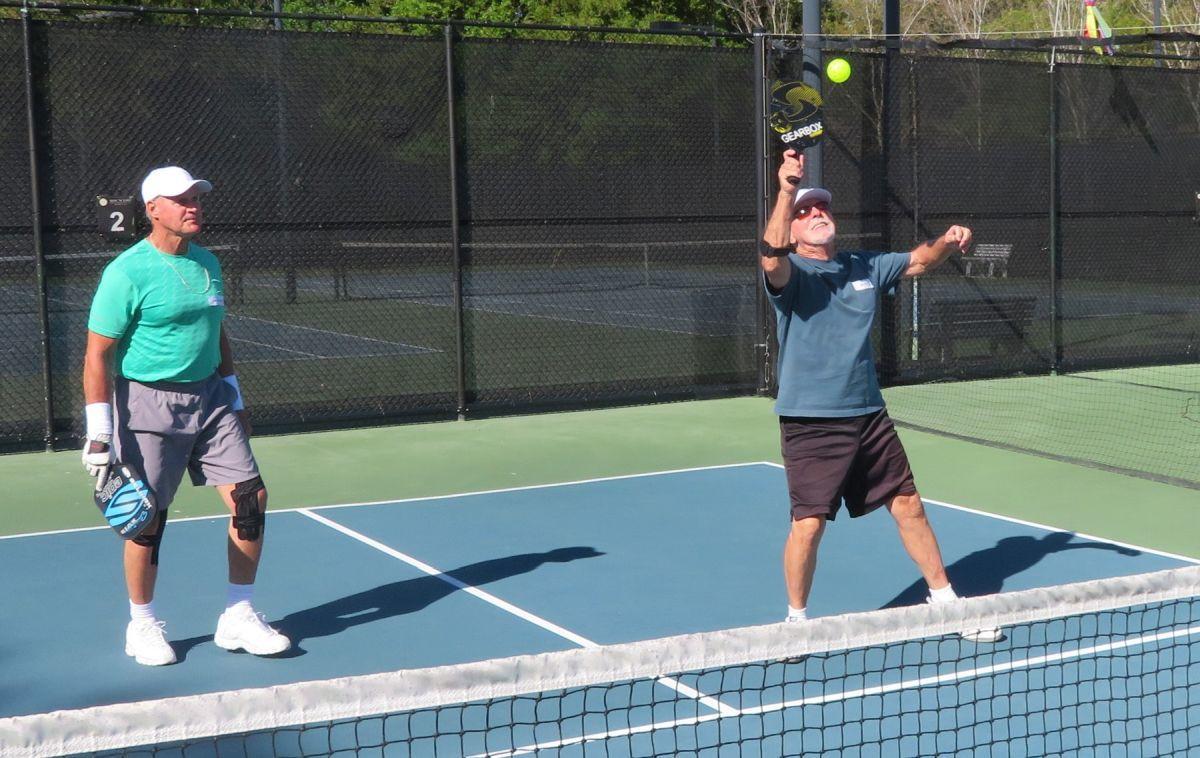 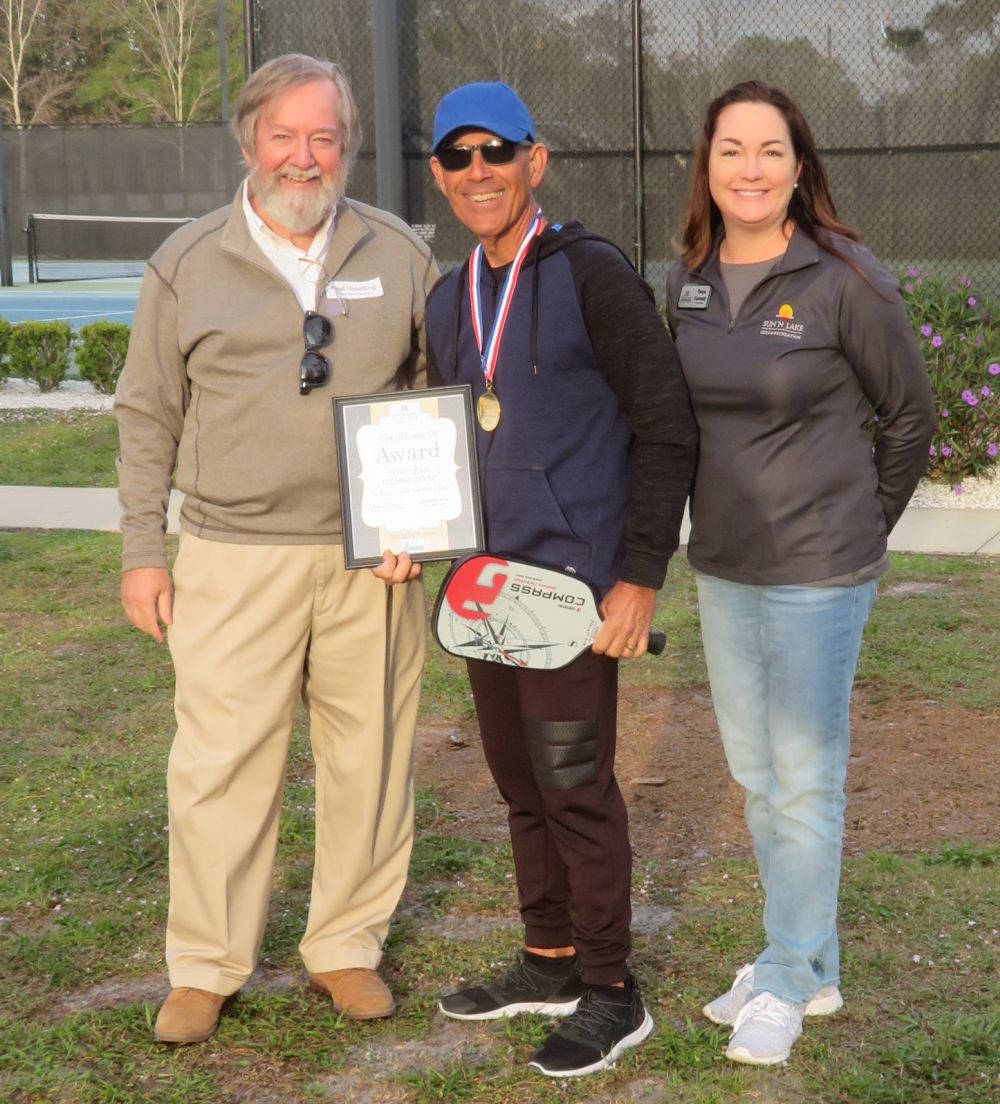 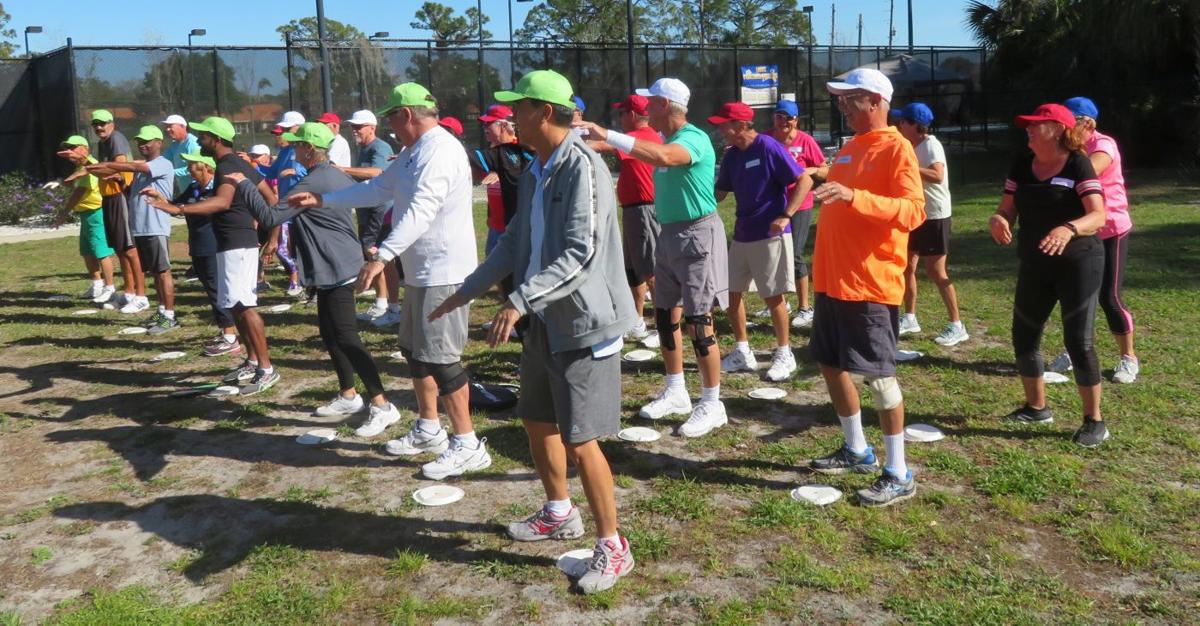 All 32 players warmed up before play commenced. 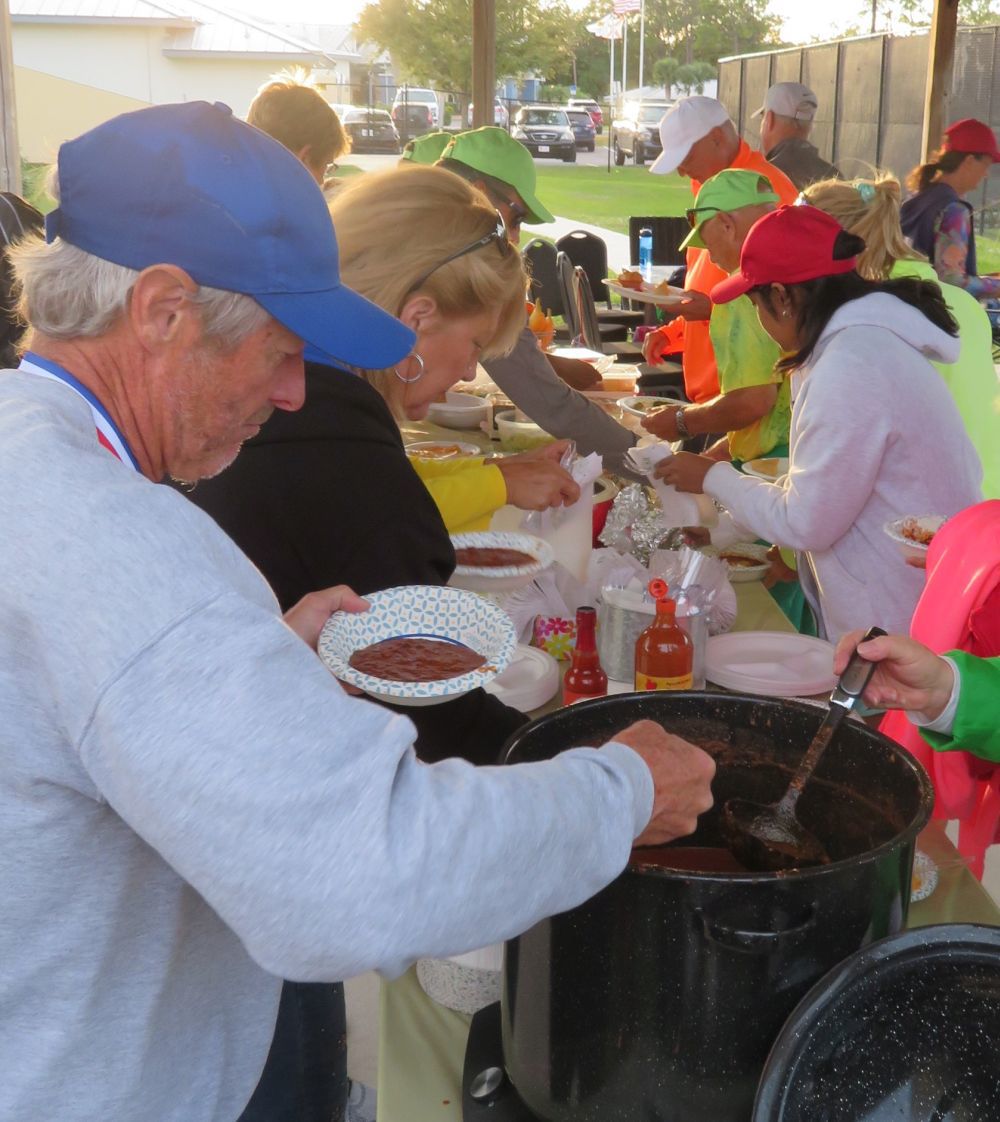 Players dig into the food at the conclusion of the tournament.

Ross Myles, the oldest player in the tournament, returns a shot with his Lime-A-Beans partner Mahender Yellu looking on.

Tom Mudge and Sree Chala are both ready for the return.

All 32 players warmed up before play commenced.

Players dig into the food at the conclusion of the tournament.

SEBRING — It was advertised as “The Chili Tournament, a pickleball tournament for everyone.” The players who took to the courts at the Sun ‘N Lake Racquet Club on Saturday ranged in age from 13- year-old Akilah Chala, a student at Hill-Gustat Middle School who has only been playing pickleball for two months, to 79-year-old Ross Myles, a veteran pickleballer.

The advertising was right in that it was for everyone, except that competitors had to be a member of the Sun ‘N Lake Racquet Club and there was only room for 32 players. The chili part was definitely accurate. Meg Smith cooked up the biggest batch of delicious chili imaginable. By the time the tournament wrapped around 5:30 and everyone was ready to eat, it really was chilly.

Dave Smith organized the event with the help of tournament director Carolyn Graham and David Kist who handled the paperwork. Ross Myles took care of the finances, Michelle Murray was in charge of set up, Illiana Andreu was the food coordinator and Bob Kollmeyer was left with clean up.

Before the tournament got underway, the players were led in some serious warm up exercises by Alex Andreu, then the four teams of eight took to the courts wearing their team hats. There were three rounds of play with players switching partners each game. The teams were selected to make them as even as possible and the matches set up to pit players of similar ability levels against one another.

To keep things moving along, each game was to 21 points, win by two, but there was a 30-minute time limit. The wins were tabulated and when everyone gathered for dinner it was announced that the Red Hot Chili Peppers were out of contention. However, there was to be a tie-breaker involving three teams. Each team had to select two players to compete in a game to just 5 points. Straws were drawn and the Mighty Marshmallows got a bye.

The Lime-A-Beans’ Ross Myles and Mahender Yellu put up a great fight but were defeated 5 to 4 by John Prentice and Dana Adams of the Blue Man Group in the semifinal match. The Mighty Marshmallows’ Jeff Lindskoog and Lee Snyder met Prentice and Adams in the final but were no match for the Blue Man duo, losing 5 to 1.

Once players and guests had filled their bowls with chili and their plates with a wide variety of side dishes contributed by those in attendance, a one-year membership to the Sun ‘N Lake Racquet Club was presented to Alex Andreu by Neal Hotelling, president of the Sun ‘N Lake Board of Supervisors and Tanya Cannady, Sun ‘N Lake general manager.

Hotelling spoke briefly about the history of the Sun ‘N Lake Improvement District, only the second such form of self-government in the State of Florida. It was started in 1974 by developer Jack Wiser who had accumulated 7,000 acres of land with the potential of 20,000 homes and 100,000 residents. Needless to say, Sun ‘N Lake hasn’t blossomed as envisioned but has some 3,500 homes and is responsible for its own water, sewers, roads and recreational facilities.

The tournament, sponsored by Highlands Pickleball Association, was a great success with players enjoying the format. Close matches were hoped for and that’s what happened throughout the day. Organizer Dave Smith wanted to show that pickleball can be enjoyed by people of all ages and all skill levels and it truly was.