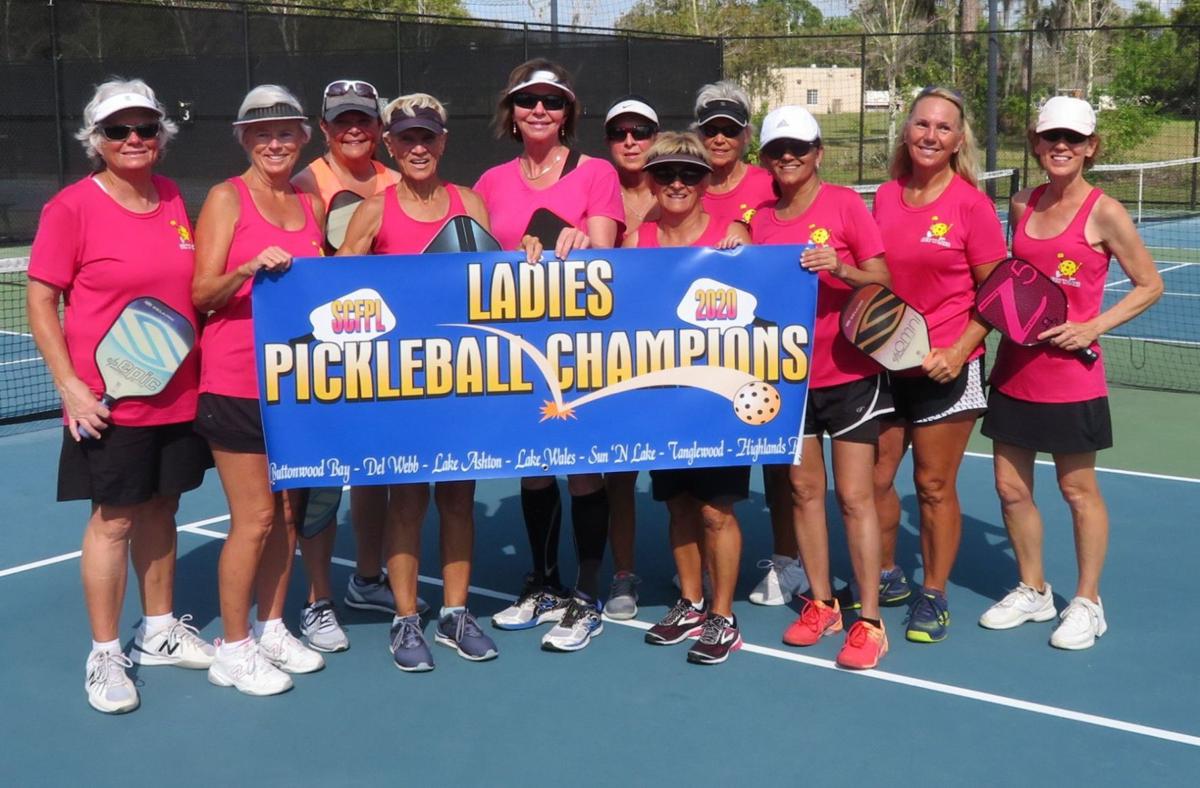 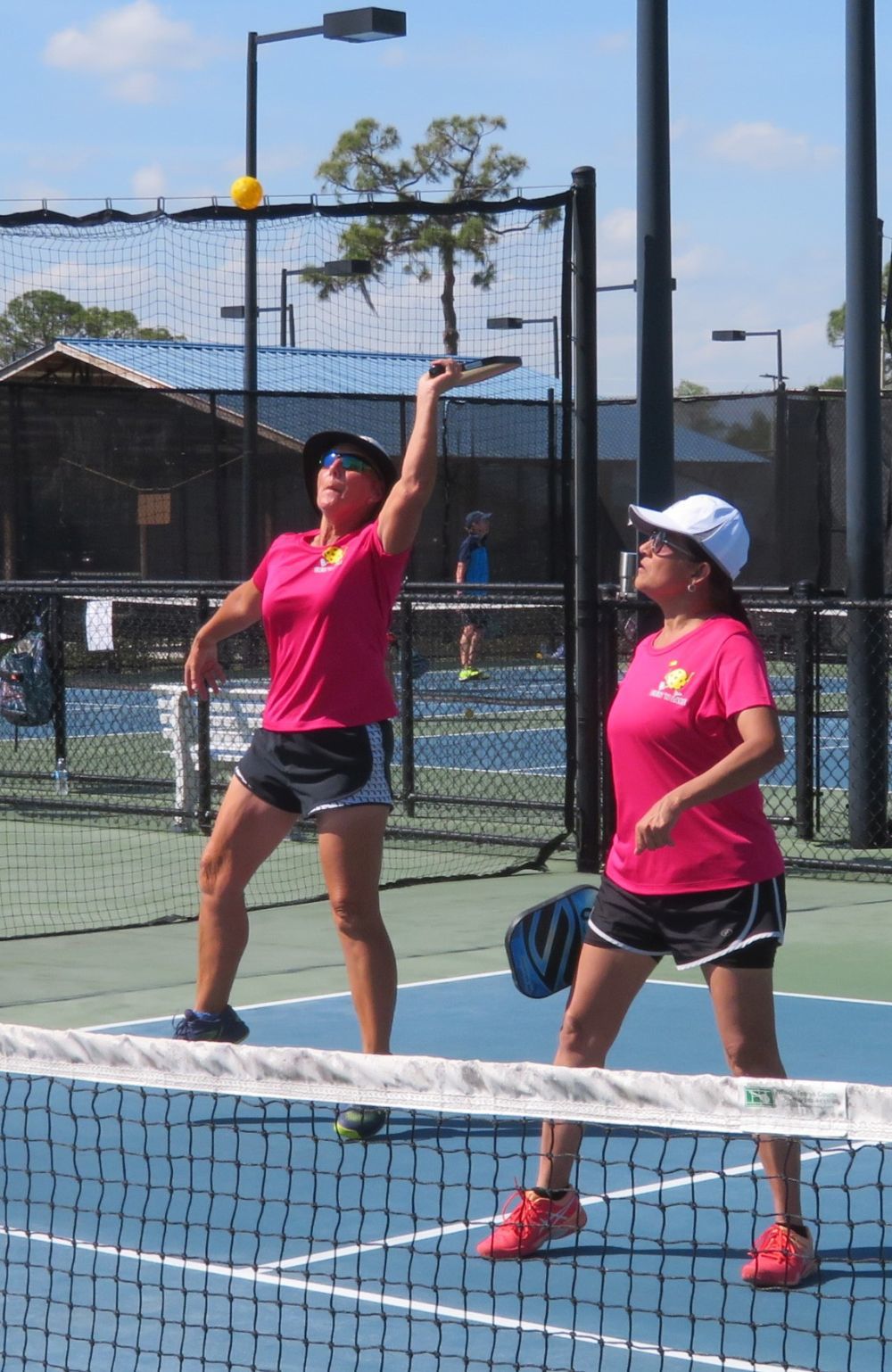 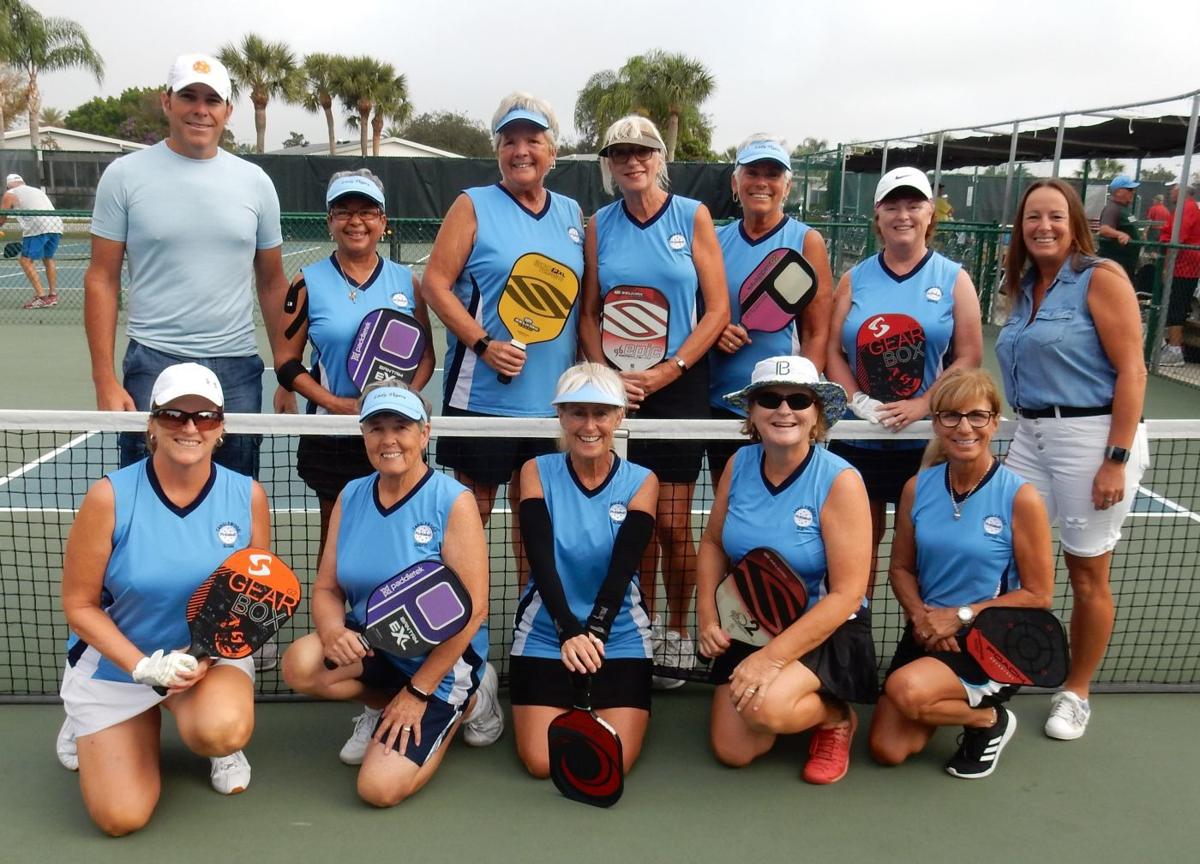 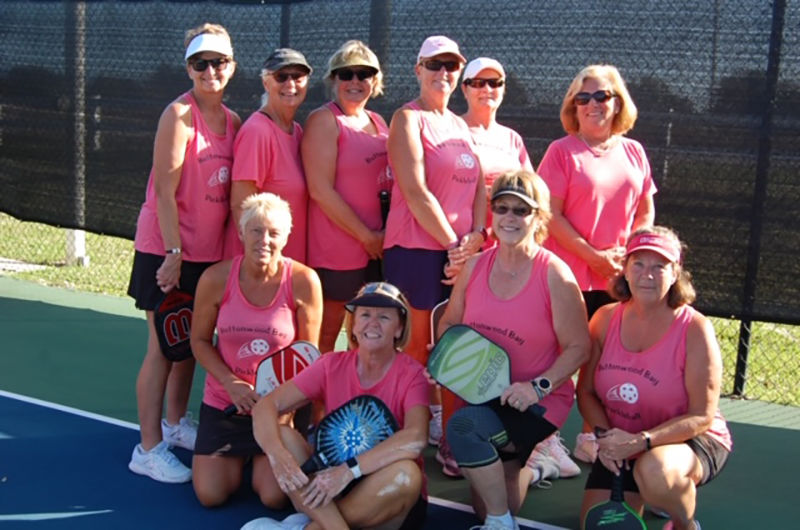 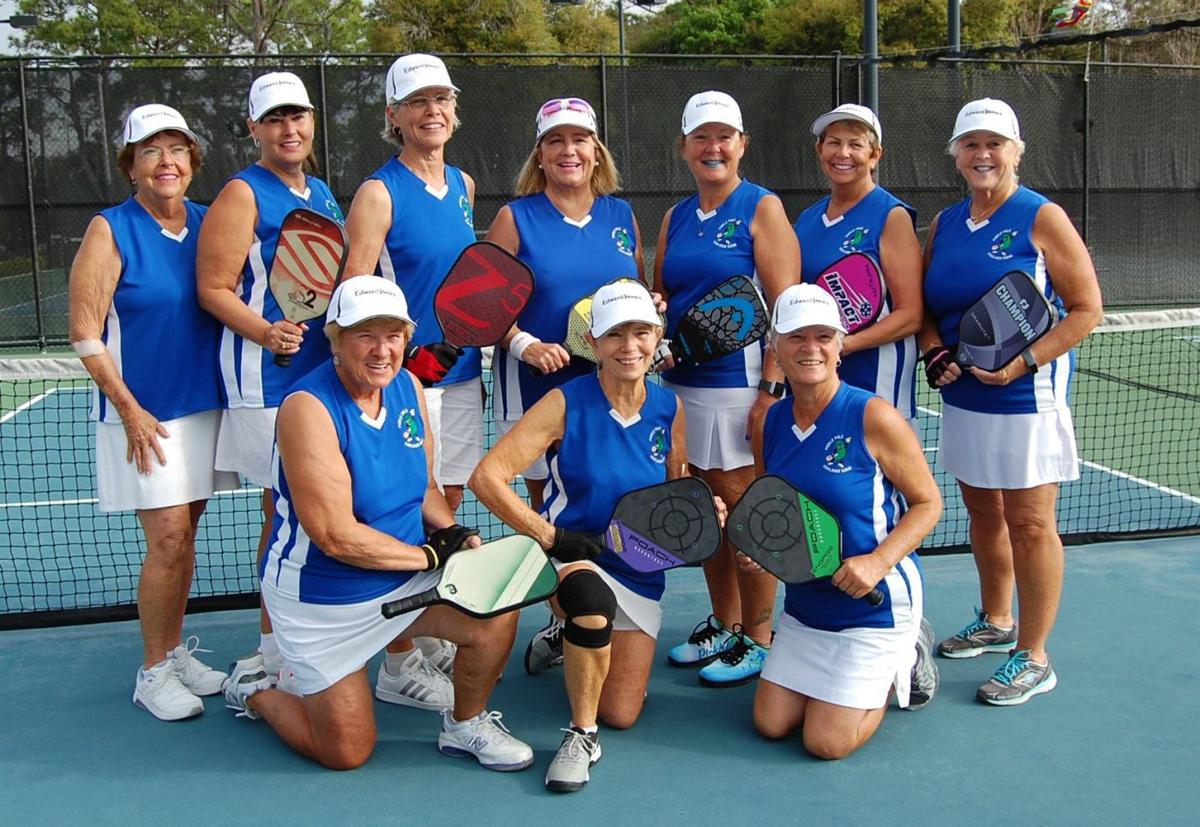 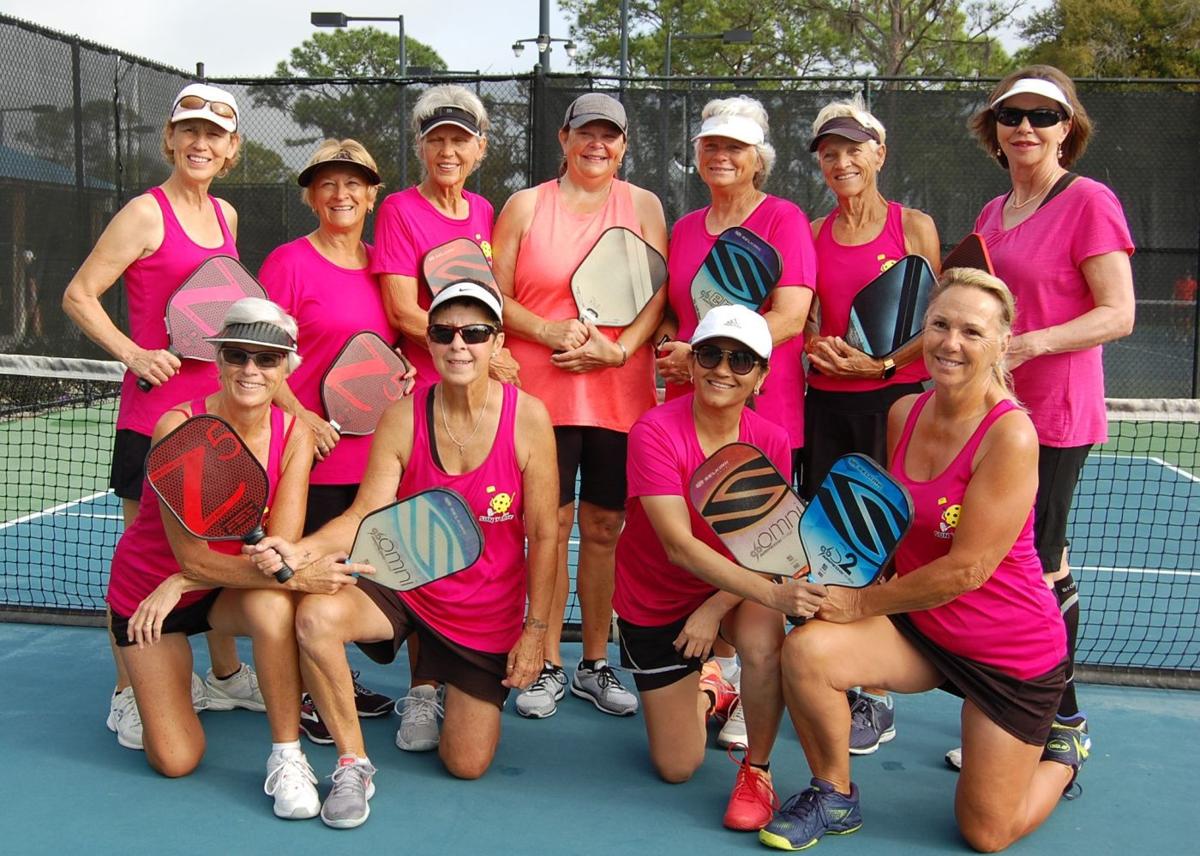 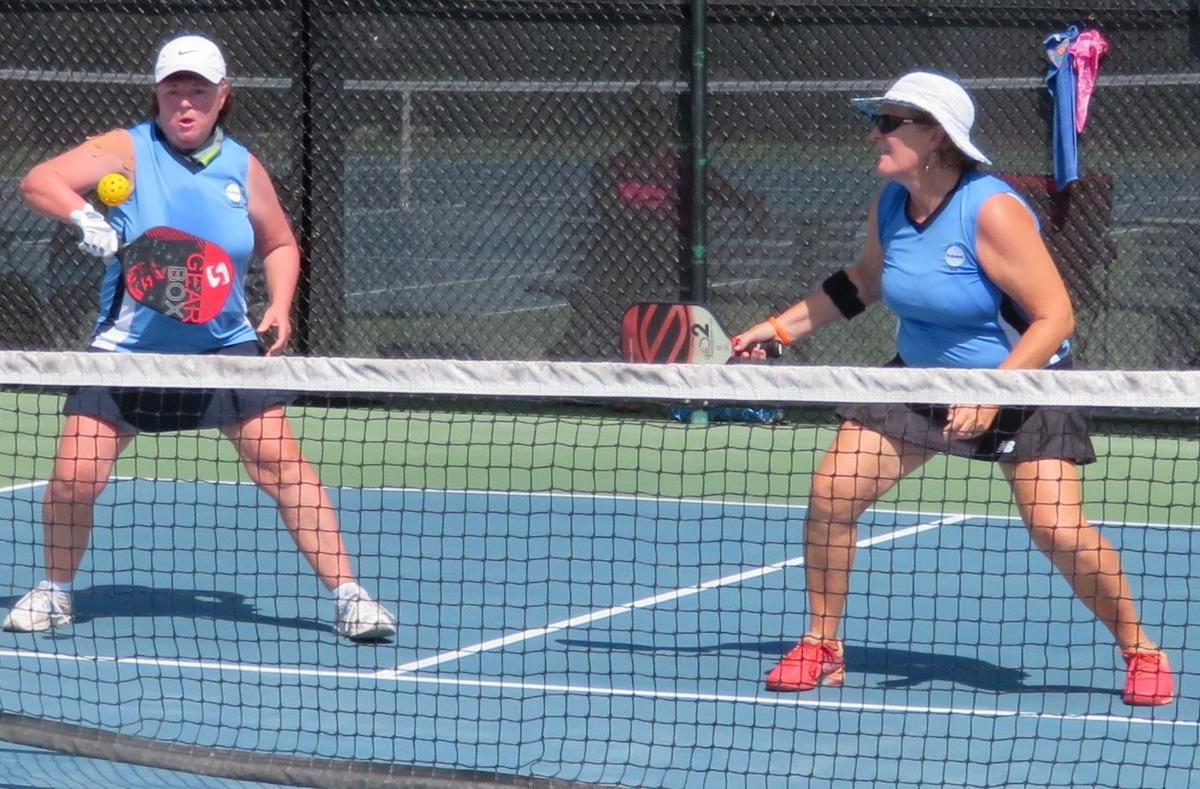 The South Central Florida Pickleball League was established by Dave Majick in 2011 to provide an opportunity for residents in 55 and over communities up and down Highway 27 to improve their skills while competing in a friendly atmosphere.

Both men and women could play on a team, referred to as “Best 8,” as each community would bring its best eight players, composed of four pairings ranked A to D. After a few years, the women wanted their own division which was started in 2016.

This year, Del Webb Orlando, Lake Ashton, Highlands Ridge, Sun N’ Lake, Tanglewood and Buttonwood Bay welcomed Lake Wales, a team which has some of the members of the 2019 River Ranch team, which was disbanded.

League play sees each community team play each of the other teams once during the regular season with all teams coming together for a championship “shootout.” Tanglewood won the championship in 2016, 2017 and 2019 with Highlands Ridge victorious in 2018.

Final standings after this season’s play had Sun N’ Lake in first place with six wins and no losses. Both Lake Ashton and Tanglewood finished the season with 4-2 records while Del Webb split their games with three wins and three losses. Buttonwood Bay and Lake Wales each had two wins and four losses while Highlands Ridge ended the season winless.

Susan Price took over as convener of the Ladies Division this year and found that everyone has been congenial yet competitive. She has seen amazing progress in the level of play since the league was established and notes that more younger players are being cultivated. With so many older players in the league, injuries and medical issues continue to be a concern, one which the rules committee has to look at carefully to ensure that proper procedures are in place for emergency substitutions.

Price plays for the Sun N’ Lake team and has been impressed with the wonderful job that team captain, Julie Oblon, has done with the team. The team practices twice a week and has spent a great deal of time working on third shot drop shots, dinks, deep serves and deep returns. Price says that the pickleball community is like a family. Oblon welcomed four new players to the team this year and says the A and B teams have played phenomenally and coached the C and D pairs and subs resulting in improved play by all.

The Tanglewood team has had lots of changes this year with Natacha Frappier being invited by the players to take over as captain and coach after the season was underway. She has been playing pickleball for just four years but has immersed herself totally in the sport watching videos, picking up coaching tips and working hard to improve her own game and to help her team members.

Susan Whalen was convinced by Frappier that she was good enough to play on the team and in short order has developed both the skill and confidence to compete. Other team rookies have enjoyed working with Frappier as well. Pat Bullens has learned a lot in short order with Frappier’s tutelage, slowing down and not trying to hit the ball so hard. JoAnne Timmins loves practicing with the team and feels her work at the net is now much better.

Pam Moore, Buttonwood Bay’s leader, reported that the team had lots of player changes due to illness, injuries and people leaving the community. The team ended the season ahead of their 2019 finish and had lots of fun. Moore was pleased to see many of the matches pushed to a third game.

The Highlands Ridge ladies team has gone through a rebuilding year. Lots of former players have moved away or were unable to play. They have lots of new players, some of whom have been playing pickleball less than a year. Team captain Suzzane Safford says that they are a close knit group who have been very diligent about getting lots of practice and improving.

On Wednesday, March 4 all seven teams gathered for the shootout. In the shootout all of the top ranked or A pairs play a double elimination tournament while the B, C and D teams do the same. Points are awarded for each match win with more points being awared to the stronger teams. A win by an A team = 7 points, a B win is worth 6, C = 5 and D = 4.

The tournament director was Joe Oblon and the referees were Don Crone and Kathi Flyte.

The local team pairings were as follows:

Tanglewood and Lake Wales played the first round at Tanglewood with the home team emerging victorious. Meanwhile, at the Sun N’ Lake courts, Lake Ashton defeated Highlands Ridge and Del Webb knocked off Buttonwood Bay. Sun N’ Lake had a bye in round one as a result of their first place finish in the regular season.

In the second round of play, the winners bracket saw Del Webb fall to Sun N’ Lake and Lake Ashton topping Tanglewood. In the consolation bracket Lake Wales knocked Highlands Ridge out of the tournament then Buttonwood was put out of contention by Tanglewood.

In the next round, Sun N’ Lake ousted Lake Wales while Tanglewood put an end to Del Webb’s championship hopes.

The semi final had Tanglewood battling Lake Ashton. Tanglewood’s B team, Susan Yuan and Wanda Felix and the C pair, Alisa Blackburn and Cheryl McCullough, both won their games 15 to 4 but that wasn’t enough to go on to the finals as the A team of Sandie March and Tracy Vernest lost a squeaker 13 to 15 and the D team, Leslie Ellis and Ellen Nesbit, was outplayed 7 to 15.

In the championship round Lake Ashton challenged Sun N’ Lake for supremacy. Sun N Lake’s Deb Knect subbed for Julie Oblon and, partnered with Pam McCreery as the D team dominated their opponents taking the set in two games, 11 to 8 and 11 to 0. Michelle Murray and Shilpa Manik were a formidable C team taking both of their games 11 to 9 to chalk up another important win for Sun N’ Lake.

Home court may have been an advantage for Susan Price and Sandra McAvoy who had an easy go in the first game of the B round winning 11 to 1 but Lake Ashton came roaring back with Valerie Metzner and Sheryl Hemingway winning 11 to 8 setting up the rubber match which Price and McAvoy won handily, 11 to 5. The stakes were high as the A teams met. Robbie Goolsby and Patty Forsyth, new to the Sun N Lake team this year, trounced Marilyn Noffsinger and Deb Louder 11 to 1 in the first game. As she so often does, Noffsinger adjusted her play for the second game and Lake Ashton scored a convincing 11 to 4 win. In game three, Goolsby and Forsyth fell behind 5 to 9 but never gave up, coming back to win 11 to 9 to seal the victory for the ecstatic Sun N’ Lake team.

Sun ‘N Lake will host the second annual “Dink Into Spring” mixed doubles pickleball tournament on Sunday, March 29. Registration is open until March 21. For information, contact the organizer, Dhruv Manik, who decided to hold the tournament again this year because people seemed to enjoy playing in it last year and it raised a significant amount of money for the Boys and Girls Club.

Also, while teaching pickleball at the club this past summer, using equipment donated through the tournament, Dhruv realized that pickleball really has a positive impact on our community. He was happy to see the kids at the club eager to learn a new sport and hopes that this year will be another fun day of pickleball.