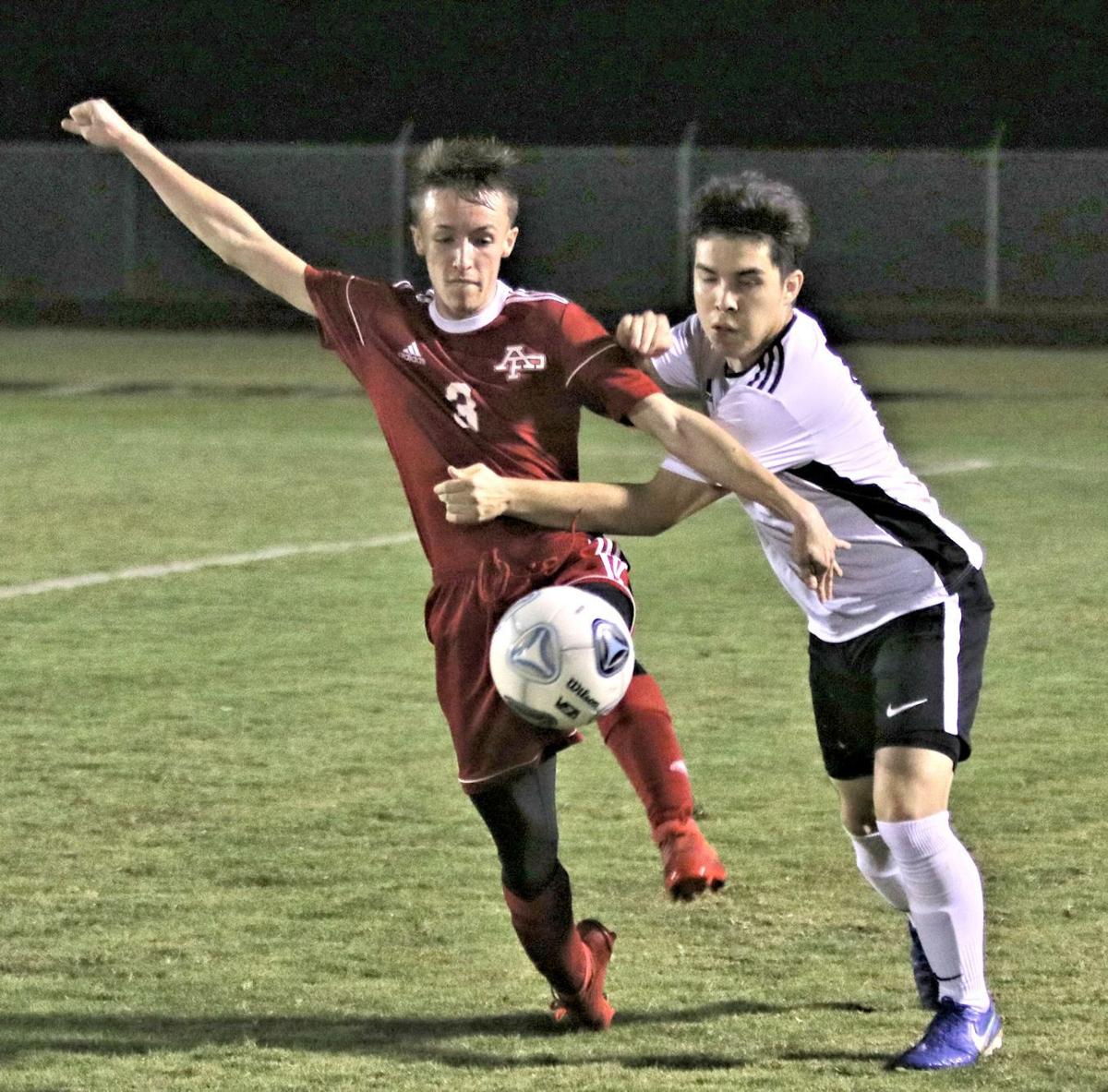 Avon Park’s Jeffrey Smith (3) fights through the hold of the Lake Region Defender to kick the ball. 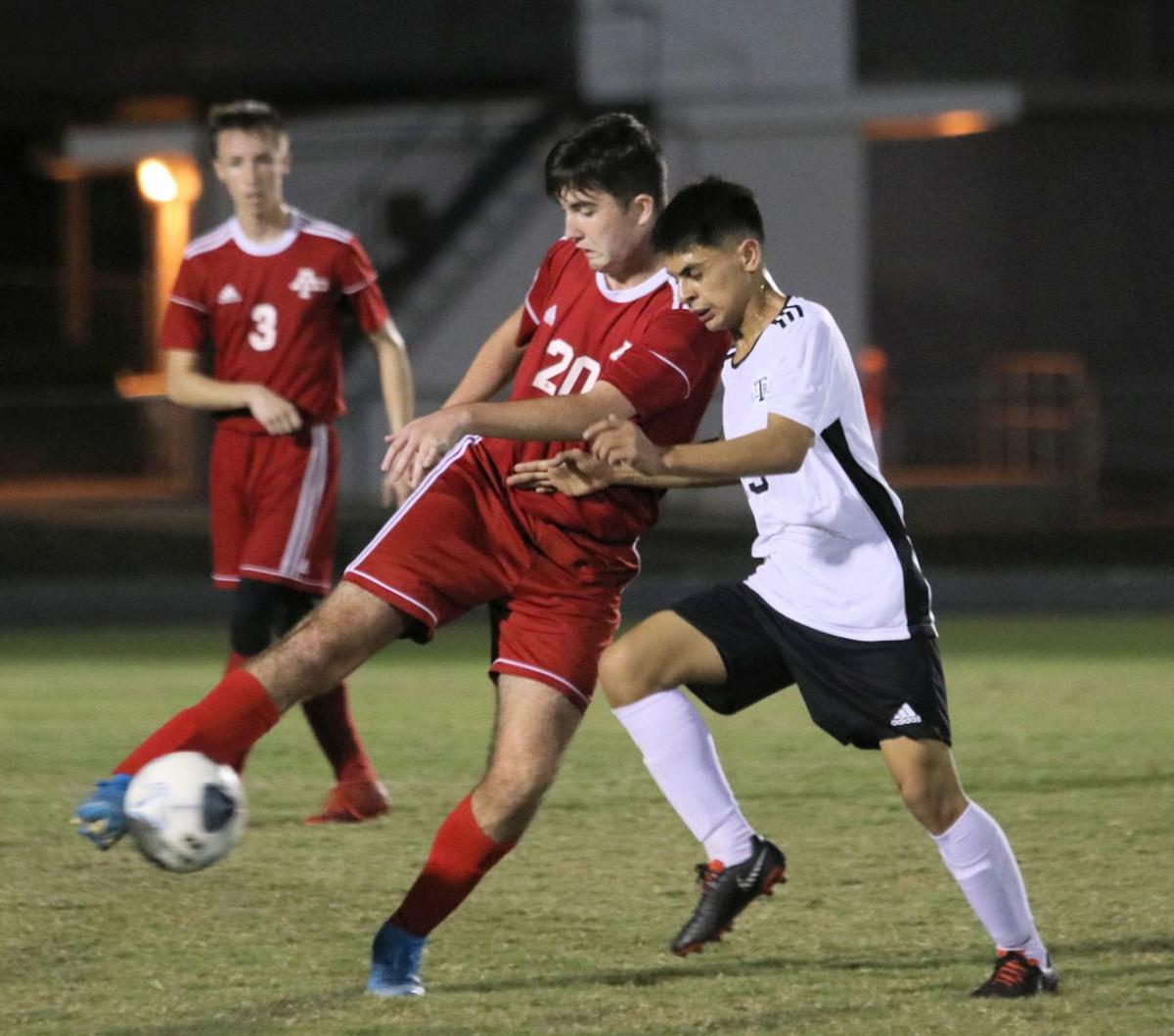 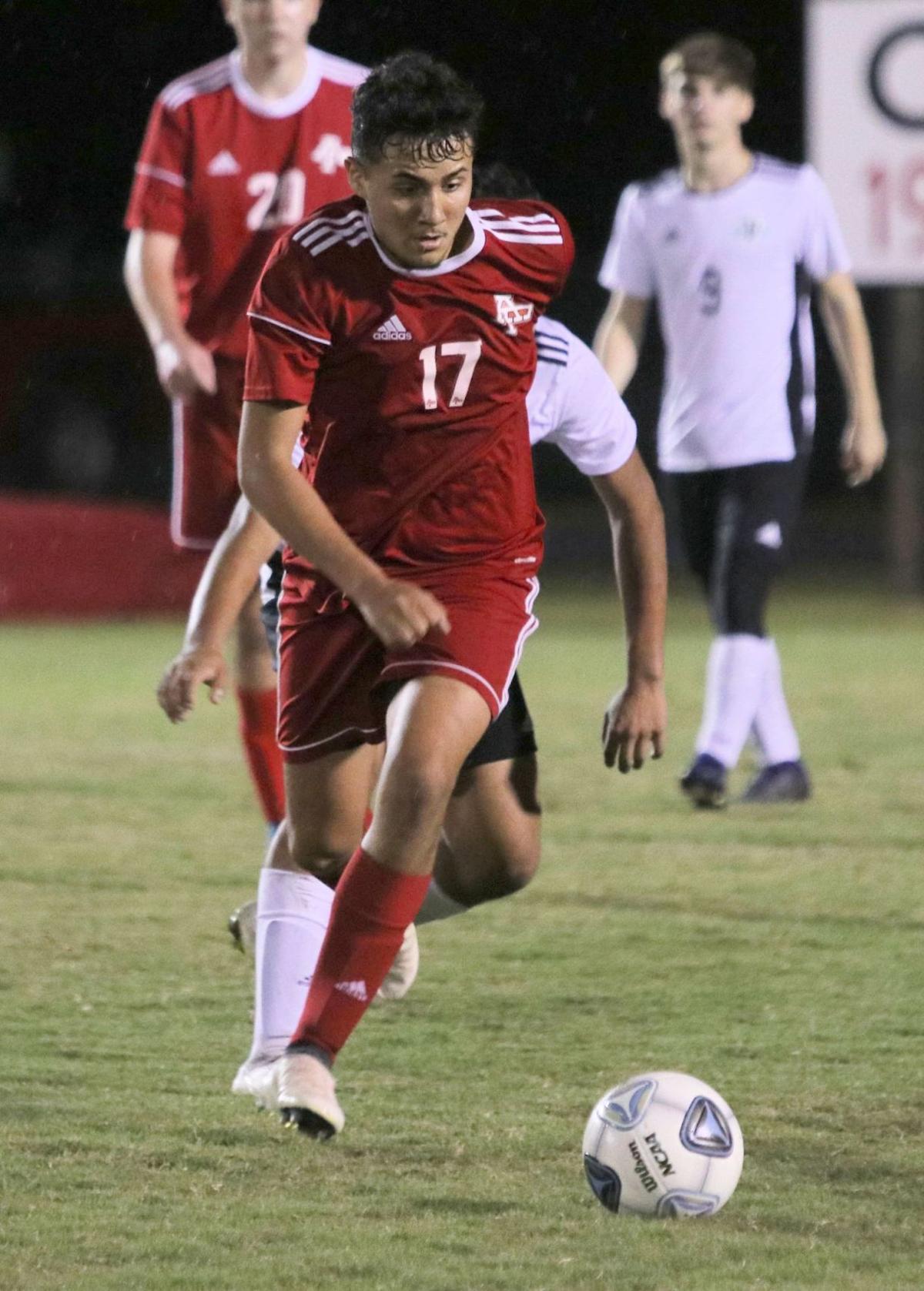 Avon Park’s Victor Alaniz (17) pushes the ball up the field with the Lake Region player trailing close behind. 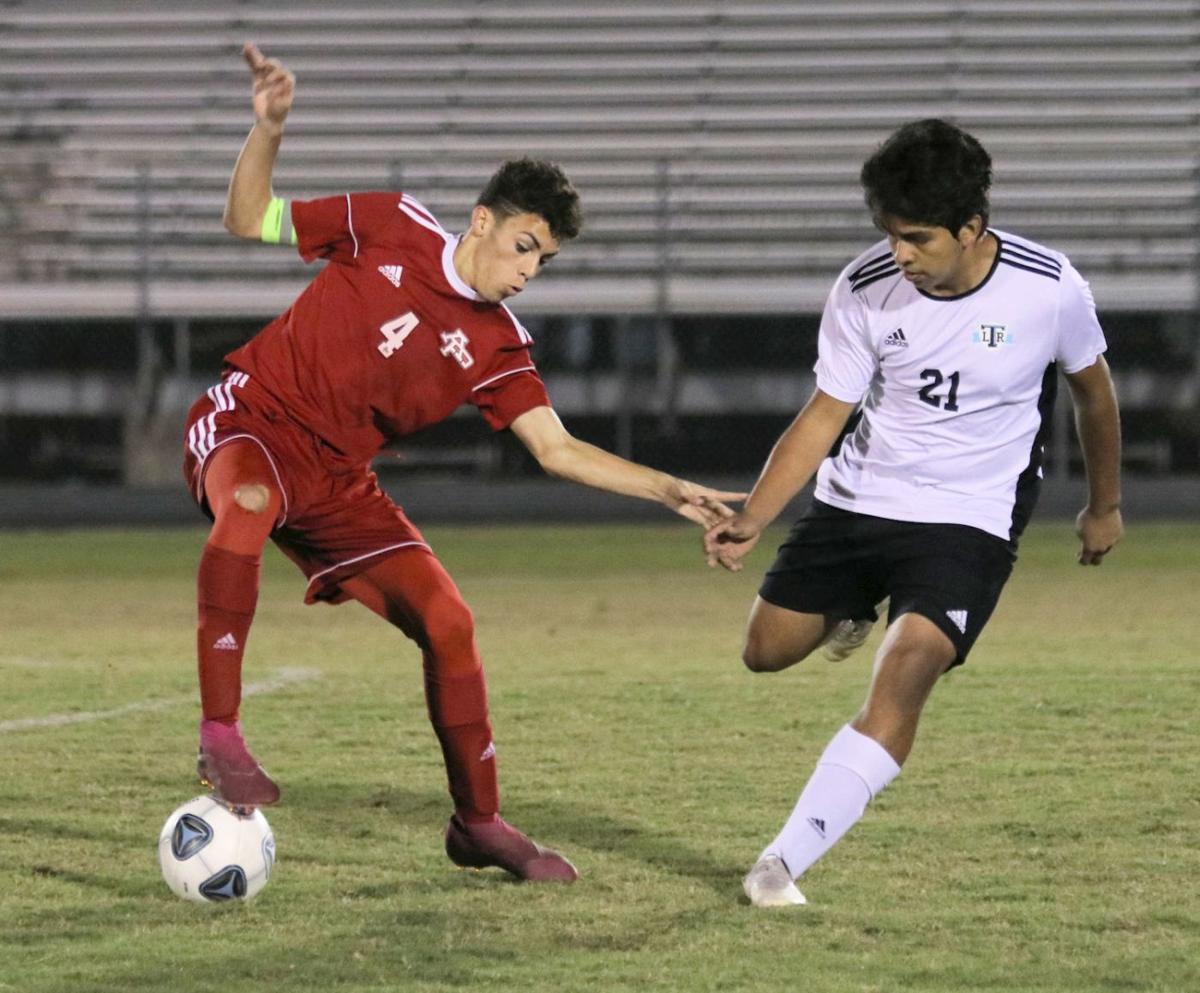 Avon Park’s Kaleb Ramos (4) puts the breaks on the ball to avoid a Lake Region player. 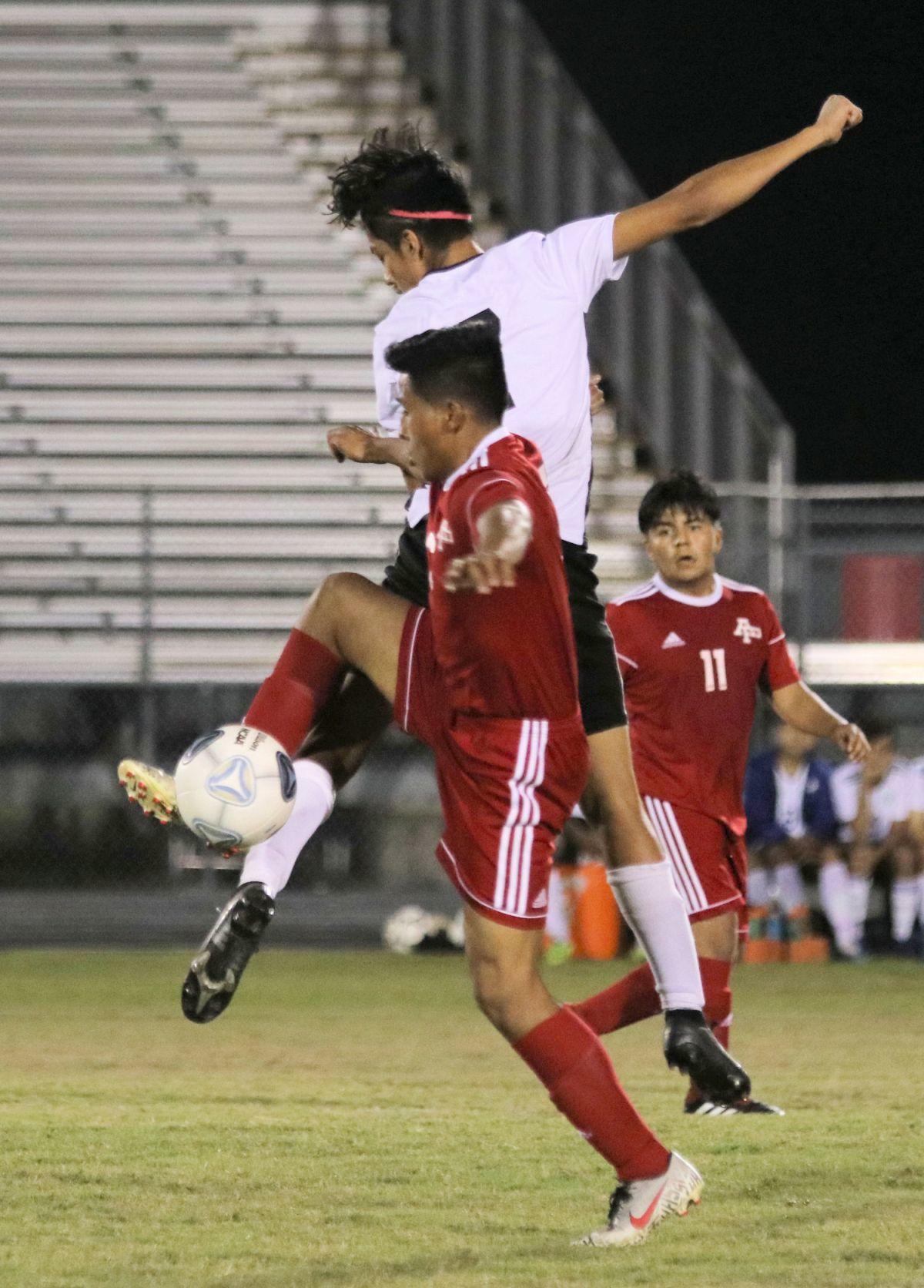 Avon Park’s Federico Ramirez (5) blocks out the Lake Region player to gain control of the ball.

Avon Park’s Jeffrey Smith (3) fights through the hold of the Lake Region Defender to kick the ball.

Avon Park’s Victor Alaniz (17) pushes the ball up the field with the Lake Region player trailing close behind.

Avon Park’s Kaleb Ramos (4) puts the breaks on the ball to avoid a Lake Region player.

Avon Park’s Federico Ramirez (5) blocks out the Lake Region player to gain control of the ball.

AVON PARK — The Avon Park Red Devils boys soccer team lost in the first round of the 4A District 12 tournament at Joe Franza Stadium in Avon Park on Friday night in a tightly-contested 1-0 decision to the Lake Region Thunder, as the Red Devils season ended with their best season in years at 5-9-1.

“Still a good season, incremental improvements,” said Avon Park Head Joshua Virkler. “I would have liked to won this one, I thought we matched up well.

“Interesting contrast in styles in where Lake Region was more on the ground and Avon Park was over the top. It was anybody’s game right up until the end.”

The first 16 minutes of the game, the Red Devils and Thunder poked and jabbed each other testing each other’s defenses. The first serious shot came at the 16-minute mark when Lake Region appeared to have a clean breakaway down the left center of the field.

Avon Park goalkeeper Cameron Bolen took a chance, not waiting for the Lake Region player to reach the goal, he went far out of the box to make a sliding block to clear ball away from the Thunder player to keep the game scoreless.

Toward the end of the first half, the Avon Park offense exerted some pressure on the Lake Region defense. Awarded a free-kick from about 30 yards out on right side of the field, Avon Park’s Kaleb Ramos found the hole in the Lake Region wall, but the shot was blocked by the Thunder goalkeeper to keep the game scoreless going into the half.

Both teams stalemated each other in the second half until the halfway mark. With 25 minutes left, an Avon Park shot sailed high and left of the goal, Lake Region threatened a minute later with a shot that was blocked.

With 21 minutes left in the game, the Red Devils just missed on two shot attempts, one a 35 yard free kick by Ramos and Damian Felix having his 15 yard shot blocked by the Thunder.

With 15:35 left in the game, Lake Region had a goal nullified for being offsides.

A minute later, the Thunder took a valuable 1-0 lead in the rain when a shot by Lake Region deflected off the back of another player just enough to get past the Avon Park goalkeeper.

The Red Devils fought hard the last 14 minutes to tie the game, but fell short to Lake Region in a 1-0 loss to end their season.

“You hate to lose it on a deflected shot,” commented Virkler. “It came off somebody’s back and the goalkeeper got wrong footed, it happens, you don’t get the breaks some nights.

“We had some trouble getting in close, so we took some longer shots than we would have liked, we just could not find the quality in the final pass.”

Virkler noted and stressed that he was proud of the hard work that his team put in throughout the season, not just this game and they have shown massive improvement.

“Our goal over the past couple of years was to make the red jersey mean something and not just an easy win for the opponent,” Virkler said. “We still have a ways to go, the guys are disappointed tonight, they thought they could win this, the potential was there, but I am pleased with this season and hopefully better things next year.”