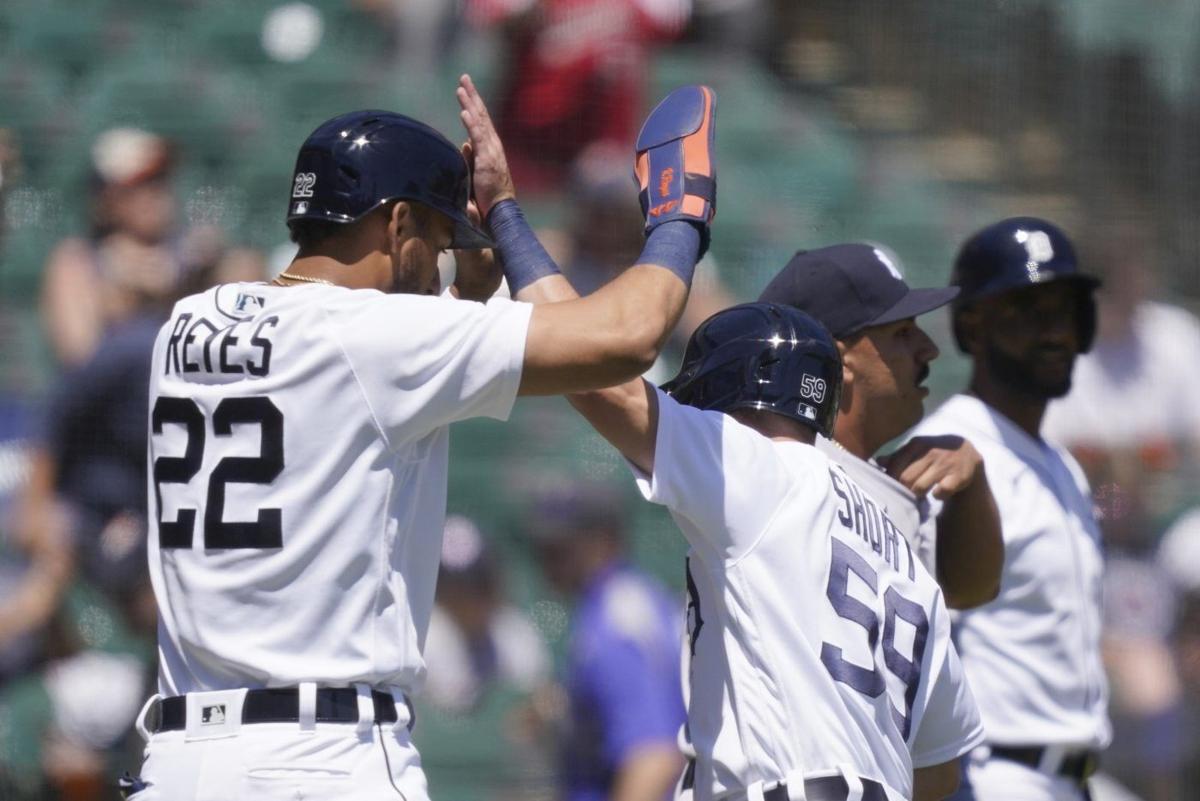 Detroit Tigers’ Victor Reyes (22) high fives teammate Zack Short after they both scored on Willi Castro’s double during the third inning of a baseball game against the New York Yankees, Sunday, May 30, 2021, in Detroit. 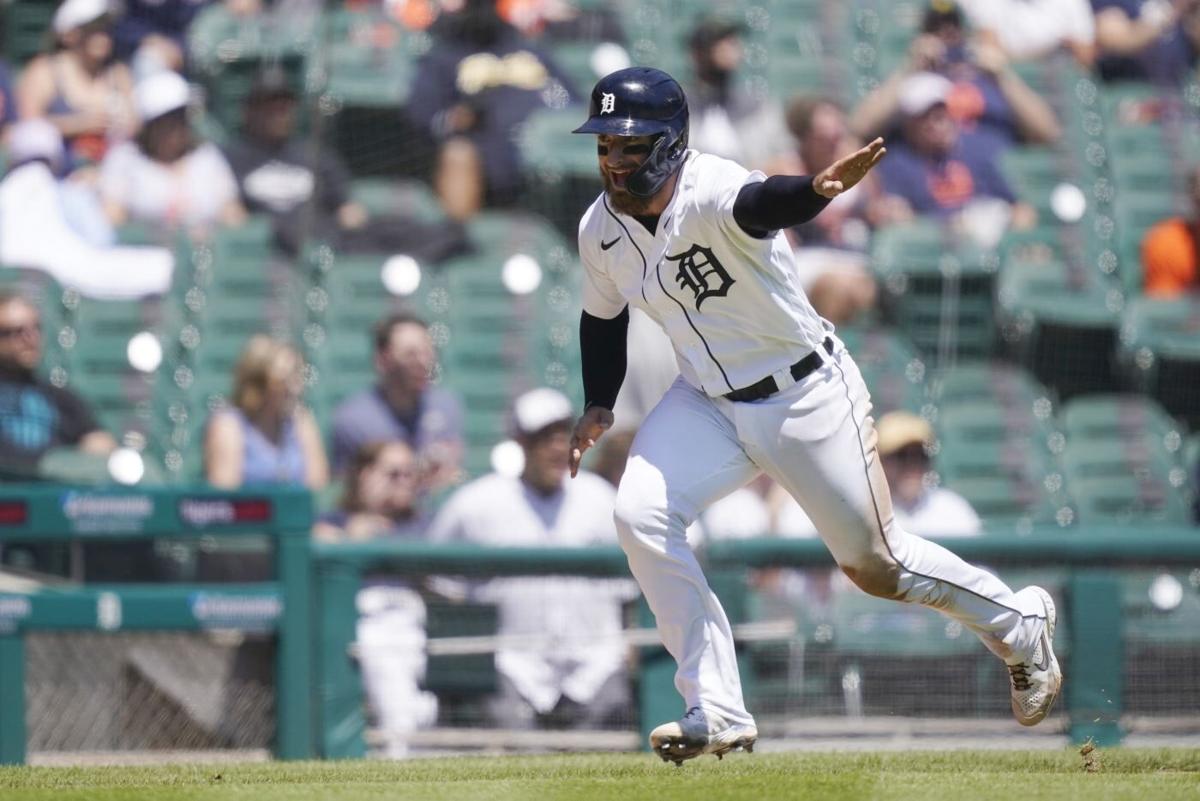 Detroit Tigers’ Eric Haase heads home to score during the third inning of a baseball game against the New York Yankees, Sunday, May 30, 2021, in Detroit.

Detroit Tigers’ Victor Reyes (22) high fives teammate Zack Short after they both scored on Willi Castro’s double during the third inning of a baseball game against the New York Yankees, Sunday, May 30, 2021, in Detroit.

Detroit Tigers’ Eric Haase heads home to score during the third inning of a baseball game against the New York Yankees, Sunday, May 30, 2021, in Detroit.

“We’ve been picking things up for a couple weeks now, but it is still great to see this group go out and sweep a team like the Yankees,” Tigers manager A.J. Hinch said. “That’s a massive momentum boost heading into a road trip.”

New York (29-24) was outscored 15-5 with 36 strikeouts during the series and went 1 for 25 with runners in scoring position. Shortstop Gleyber Torres had two errors and third baseman Gio Urshela one that contributed to a four-run third inning and a 6-0 lead for Detroit (22-31).

“This was just a bad ending to a terrible weekend, and we got to get better,” Yankees manager Aaron Boone.

Gary Sánchez made a baserunning blunder as the Yankees tried to rally in the eighth, stopping and jogging part of the way to second, then speeding up and getting thrown out.

“You’ve got to be aware of kind of the ballpark and surroundings,” Boone said. “Yeah, that’s a mental error.”

Michael King allowed four runs — two earned — three hits and two walks in 2 1/3 innings in an erratic audition to replace injured Corey Kluber in the rotation that was no better than Deivi García’s on Saturday.

New York loaded the bases with two out in the ninth, but Michael Fulmer struck out Aaron Judge, the 12th strikeout by Tigers pitching.

“I know Fulmer’s got good fastball, hard slider, kind of just looks like the fastball,” Judge said. “Couple sliders took off on me and made some bad decisions, didn’t swing at the ones hanging up the at the top of the zone.”

Detroit had not swept a three-game home series from the Yankees since May 12-14, 2000, its first season at Comerica Park.

New York has lost five of six following a six-game winning streak. The Yankees headed home for a seven—game homestand against the two teams ahead of them in the AL East, first-place Tampa Bay and second-place Boston.

“What we’ve been putting out there right now is not our best, and it’s unacceptable,” Judge said.

Before the game, Boone said Triple-A first baseman Chris Gittens was “on our radar.”

“In my last few starts, I’ve been getting sharper as the game went on,” he said. “I’ve been trying to work on getting into that kind of rhythm right from the start instead of taking a few innings.”

New York’s first two runners reached in the first, but Judge grounded into a double play.

Nomar Mazara hit a two-run double in the bottom half, with Miguel Cabrera running through a stop sign to score on an off-line throw by left fielder Clint Frazier.

“We told Miggy in the dugout that, along with all of his other milestones, he might have just set the record for most stop signs ignored in a career,” Hinch said with a laugh. “We need Frazier to throw it over the cut-off man to get a run there and it worked out.”

Willi Castro hit a three-run double in the four-run third off Nestor Cortes Jr., who made his season debut. Torres slammed his glove into the dugout wall and floor on his way off the field at the end of the inning.

“I’m really working hard and maybe say it’s a little frustration for me, especially in that inning, Cortes and King threw too many pitches,” Torres said. “It’s all on myself.”

Torres hit an RBI single in the eighth off Bryan Garcia and Sánchez had a run-scoring single against Fulmer. When the ball got away from first baseman Jonathan Schoop, Sánchez tried to advance but failed to hustle and was thrown out.

“I tried to be aggressive there on that play,” Sánchez said through a translator. “It ended up being not a good decision.”

The wife of Yankees 1B Luke Voit delivered a girl.

While the United States celebrates Mother’s Day on the second Saturday in May, it is held on the last Sunday of May in the Dominican Republic. Castro and Candelario, both U.S. citizens with Dominican heritage, wore pink undershirts for the occasion.