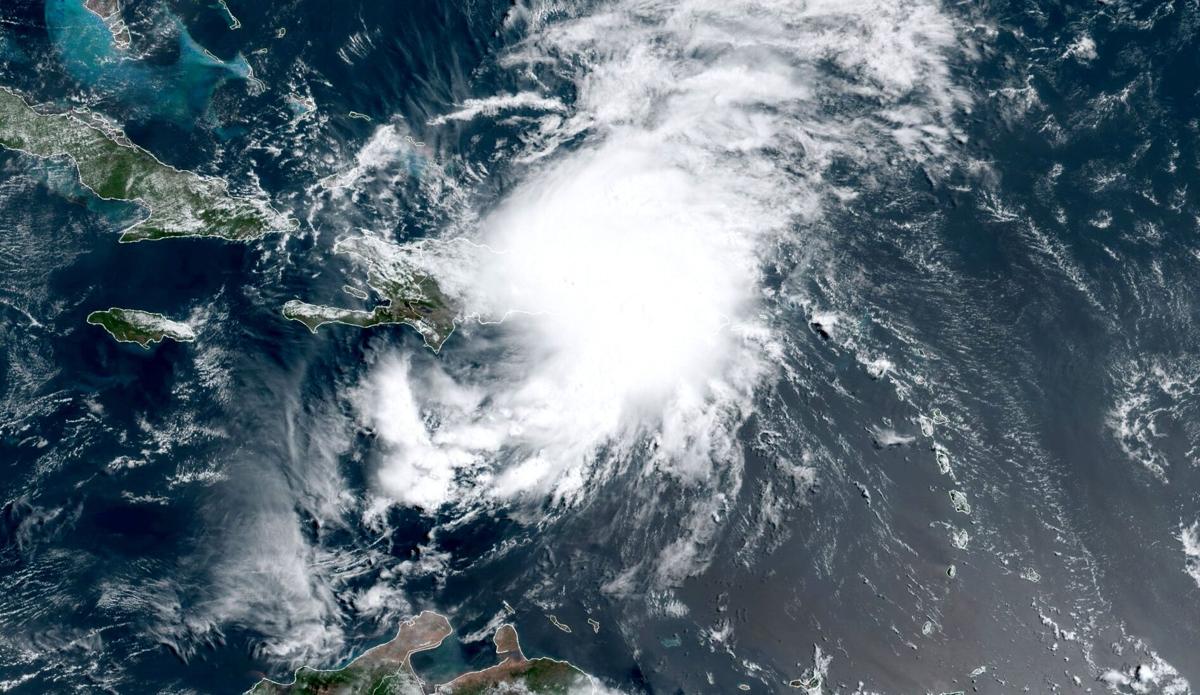 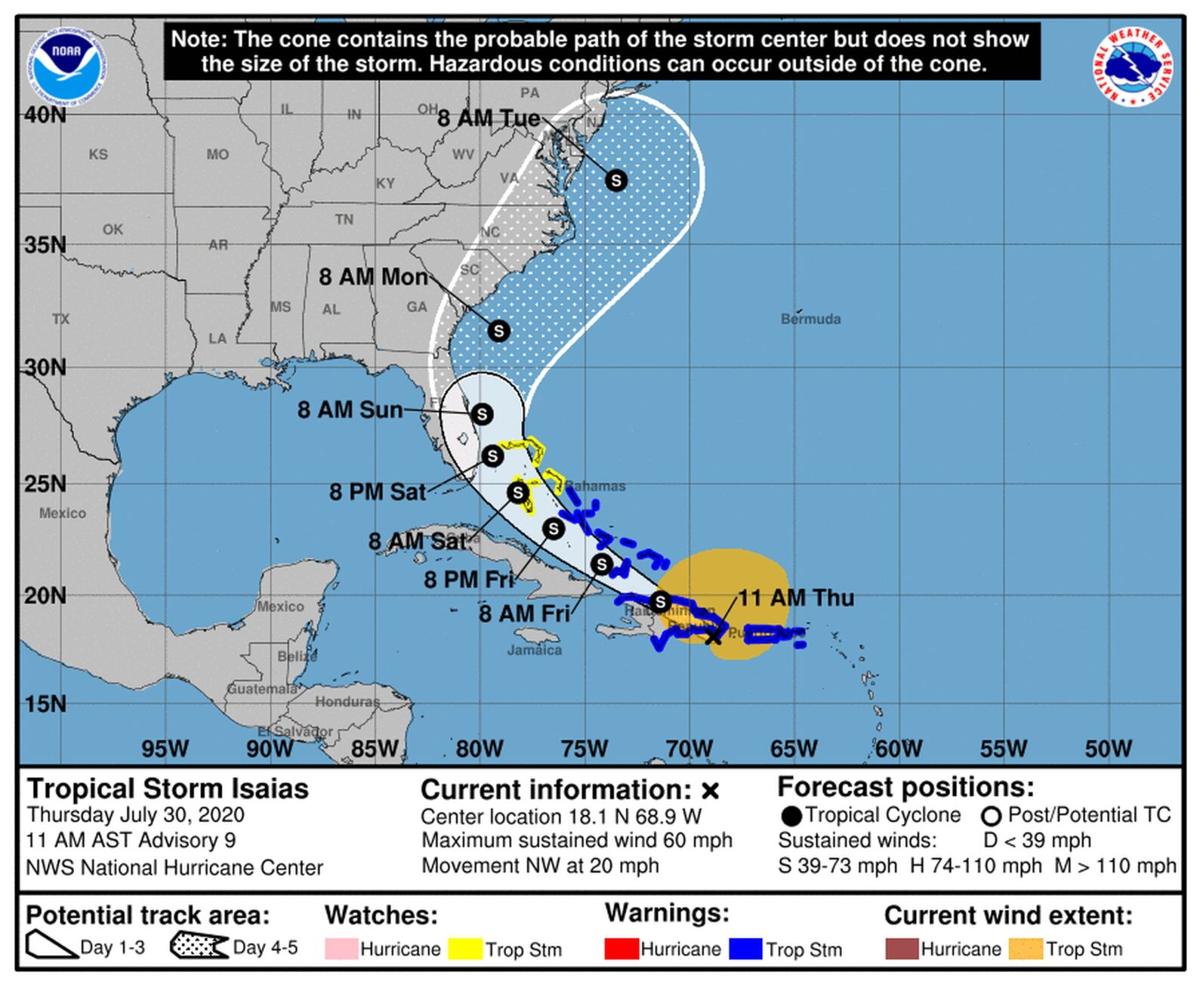 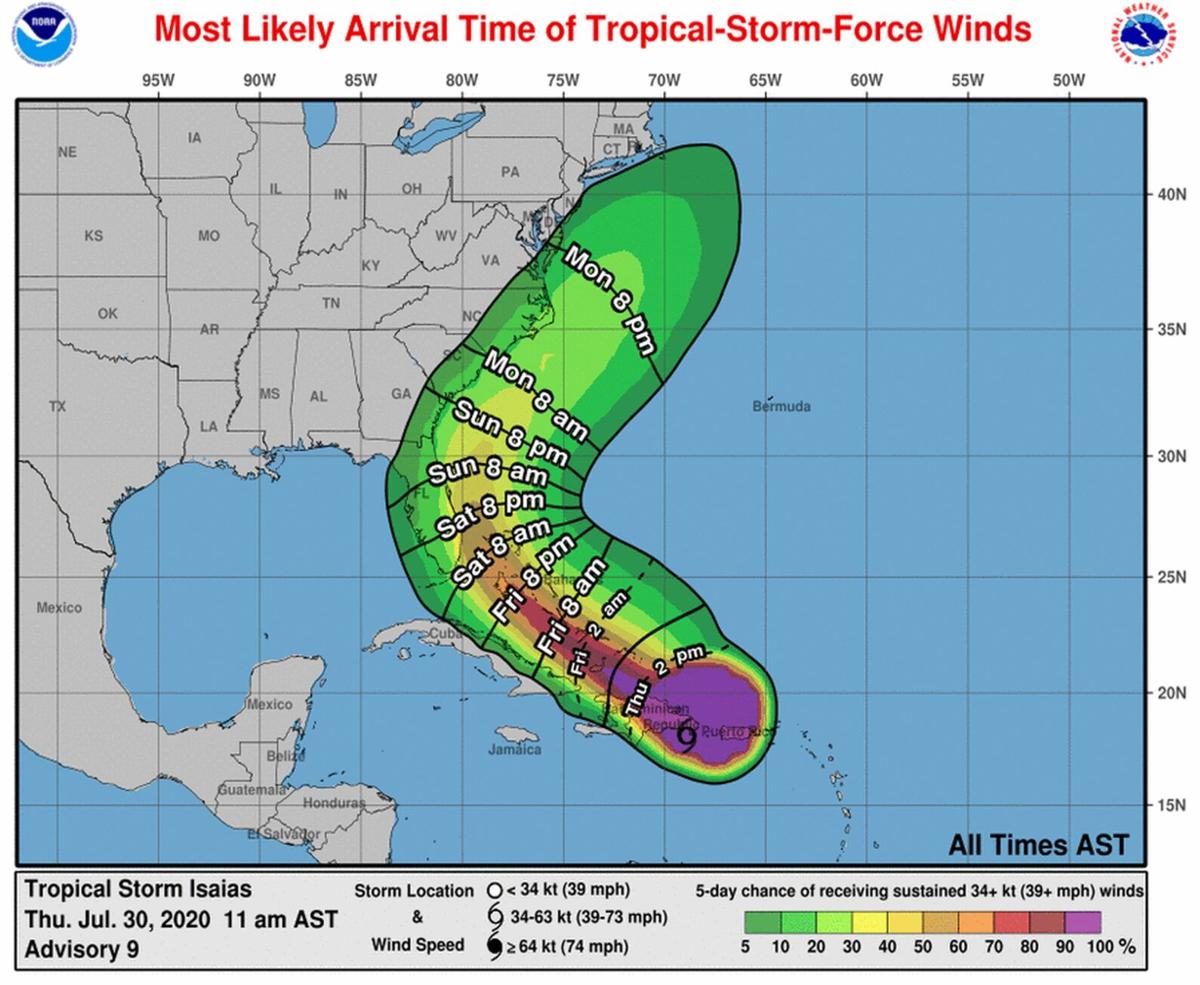 SEBRING — Tropical Storm Isaias may turn north and sideswipe Florida, if the predictions as of Thursday morning hold true.

The probability cone presented by the National Hurricane Center at the National Oceanic and Atmospheric Administration shows the center of the storm skirting the east coast of the state from 8 p.m. Saturday and 8 a.m. Sunday.

Maximum sustained winds are near 60 mph (95 km/h) with higher gusts, NHC reported. Tropical storm force winds extend outward up to 310 miles (500 km) primarily to the north of the storm center.

As of midday Thursday, Isaias (pronounced “ees-ah-EE-ahs”) was over the ocean, centered directly north of the straits between Dominican Republic and Puerto Rico, with storm warnings in effect for Puerto Rico, the U.S. Virgin Islands, Dominican Republic, Haiti, the Turks and Caicos Islands, and the Southeastern and Central Bahamas.

Isaias was moving toward the northwest at almost 20 mph (31 km/h), with a west-northwestward to northwestward motion, and expectation that the storm would slow as the center of Isaias moved over Hispaniola and near the Southeastern Bahamas by late Thursday/early Friday.

As of Thursday, tropical storm force winds were hitting the southern coast of Puerto Rico, with reports of sustained winds of 45 mph (72 km/h) with a gust to 54 mph (87 km/h).

A wind gust of 60 mph (96 km/h) was reported at Punta Cana on the eastern tip of the Dominican Republic.

By Friday night, Isaias should be over the Central Bahamas on approach to the Northwest Bahamas or southern Florida by Friday night or early Saturday morning.

Predictions were for life-threatening flash floods and mudslides, in rivers and small streams in the U.S. Virgin Islands, Puerto Rico and Hispaniola.

While Isaias may weaken Thursday from passing over Hispaniola, re-strengthening is forecast for Friday and Friday night.

Heavy rains associated with Isaias may start affecting South Florida by Saturday morning with the possibility of isolated flash and urban flooding, especially in low-lying and poorly drained areas.

Highlands County officials have asked residents to use this time to make sure they are prepared.

That includes reviewing emergency plan and considering what needs to be changed due to COVID-19, gathering fresh supplies for emergency kits, preparing property by cleaning up any loose objects in the yard, following NOAA National Weather Service updates and signing up for community emergency alerts at bit.ly/hcbccalert.

Also, Highlands County will provide the public 10 sandbags per person through Saturday from 7 a.m. to 6:30 p.m. at the Road and Bridge Department offices at 4344 George Blvd. in Sebring, East Winthrop Street in Avon Park and County Road 621 in Lake Placid.

People may fill those sandbags at:

When you arrive at the sandbag locations, stay in your vehicle. Bags will be brought to your car by a county employee.