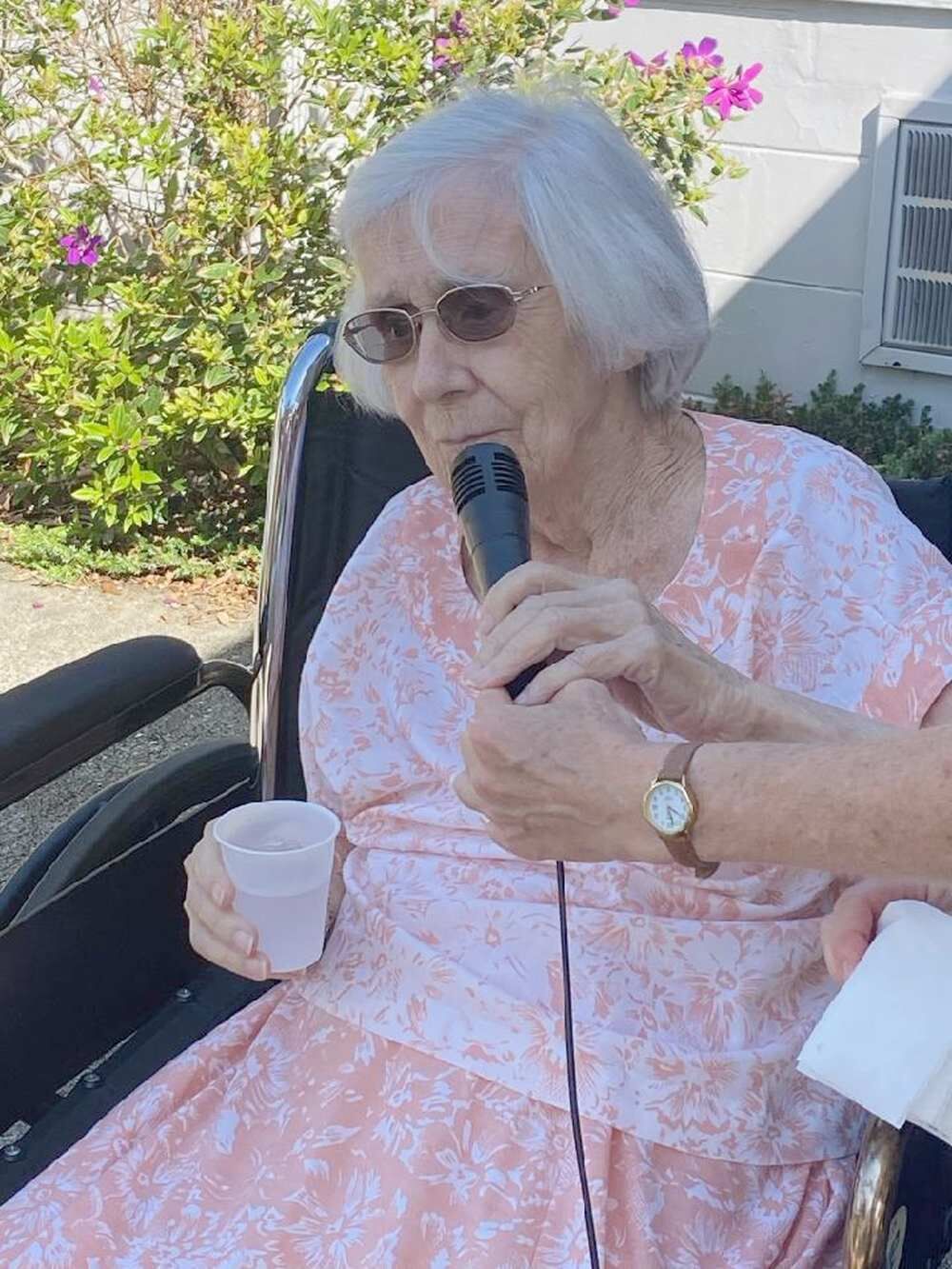 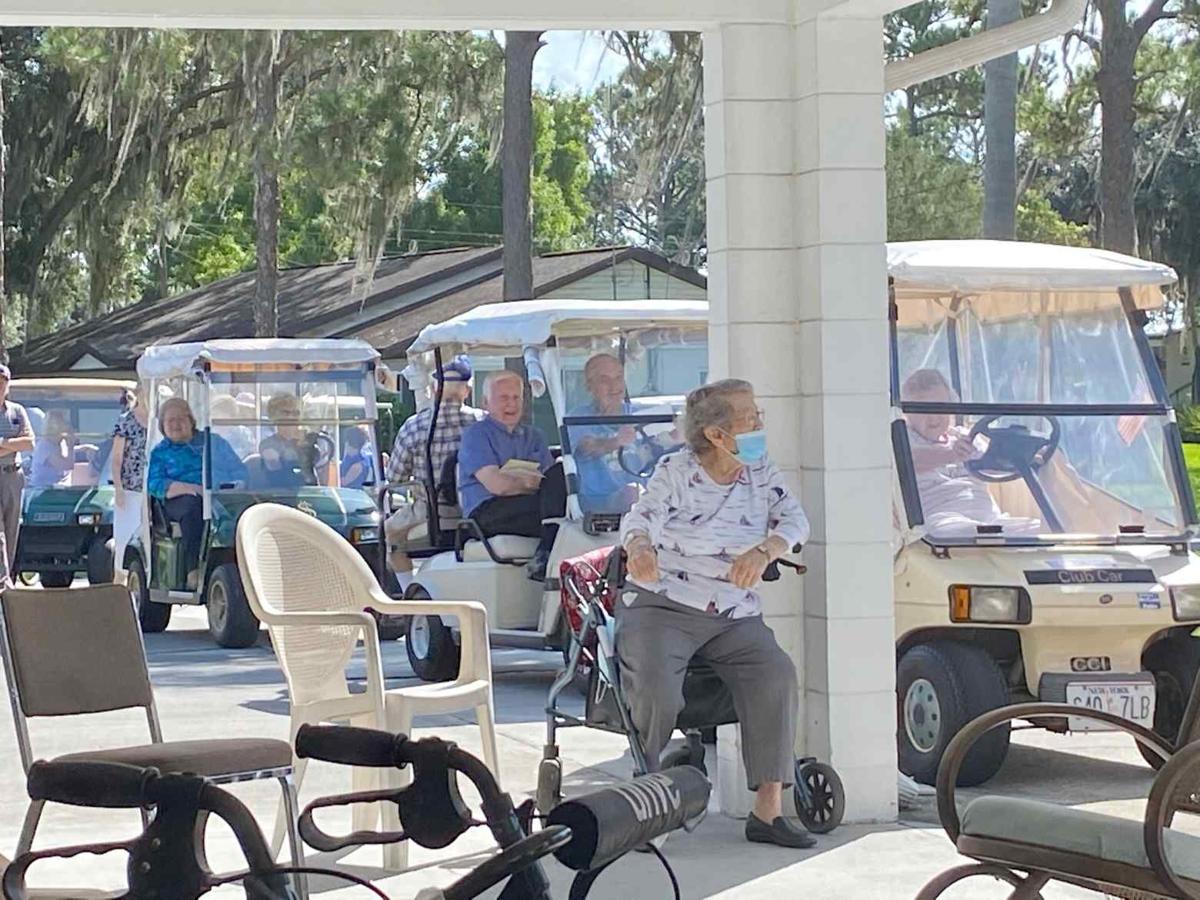 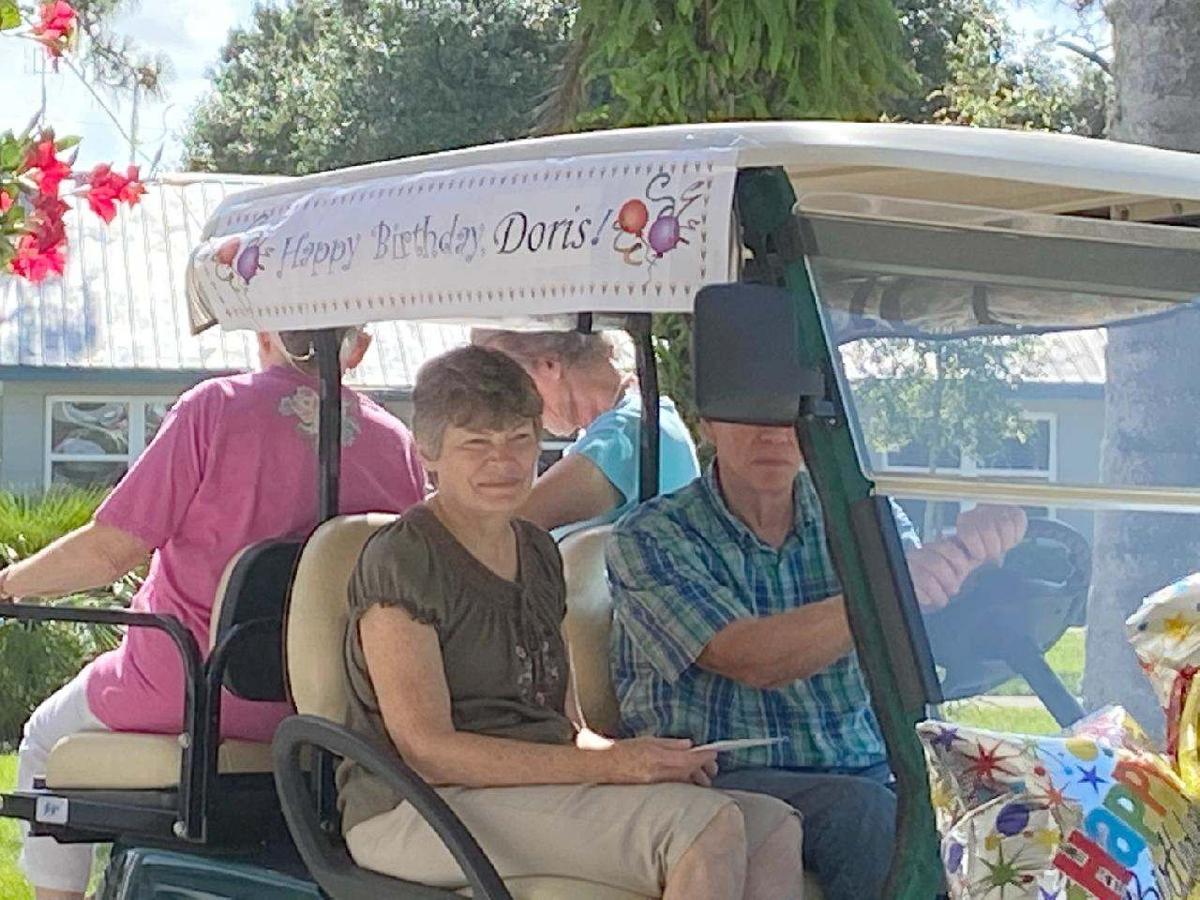 Friends in cart with banner. 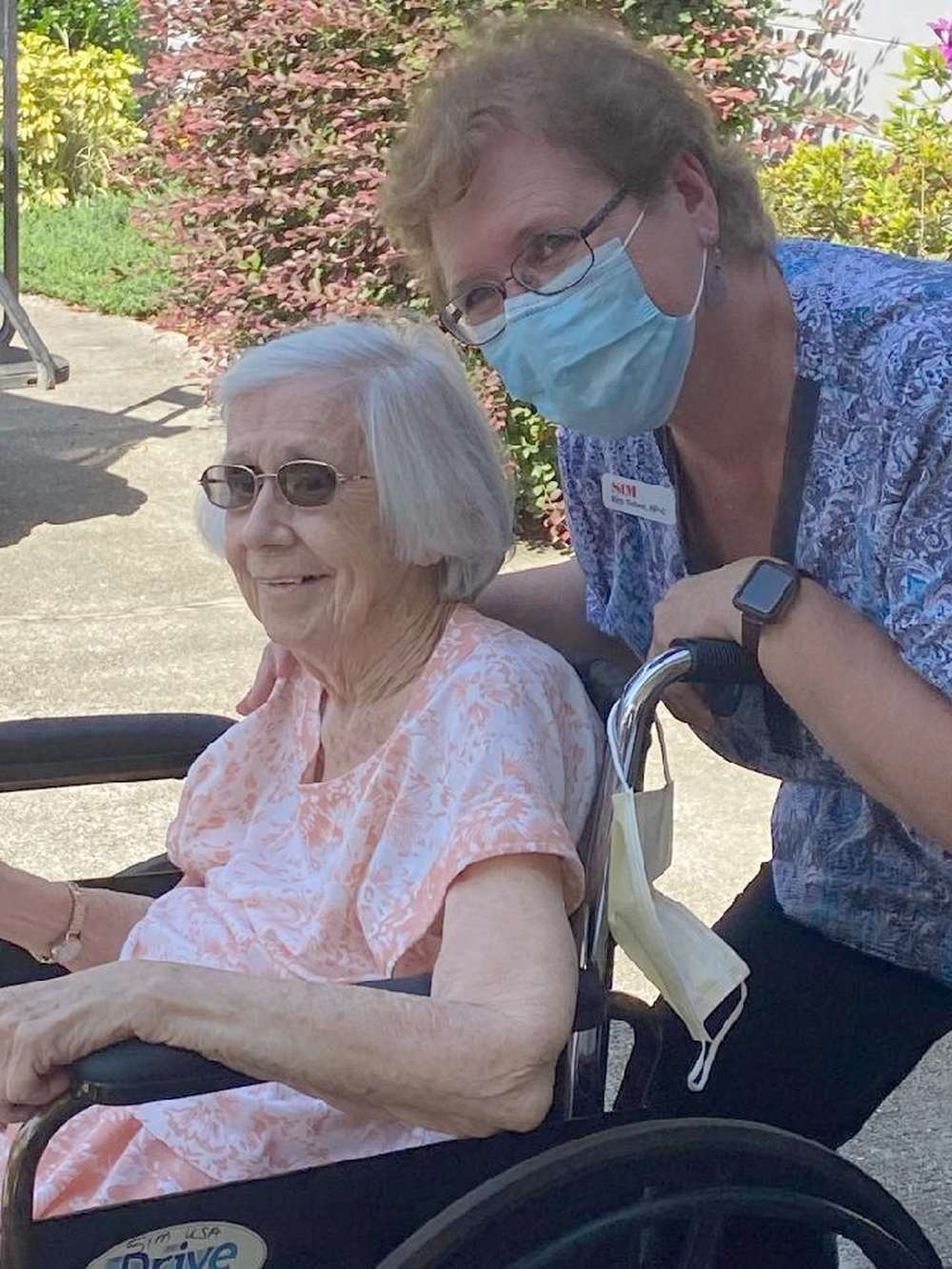 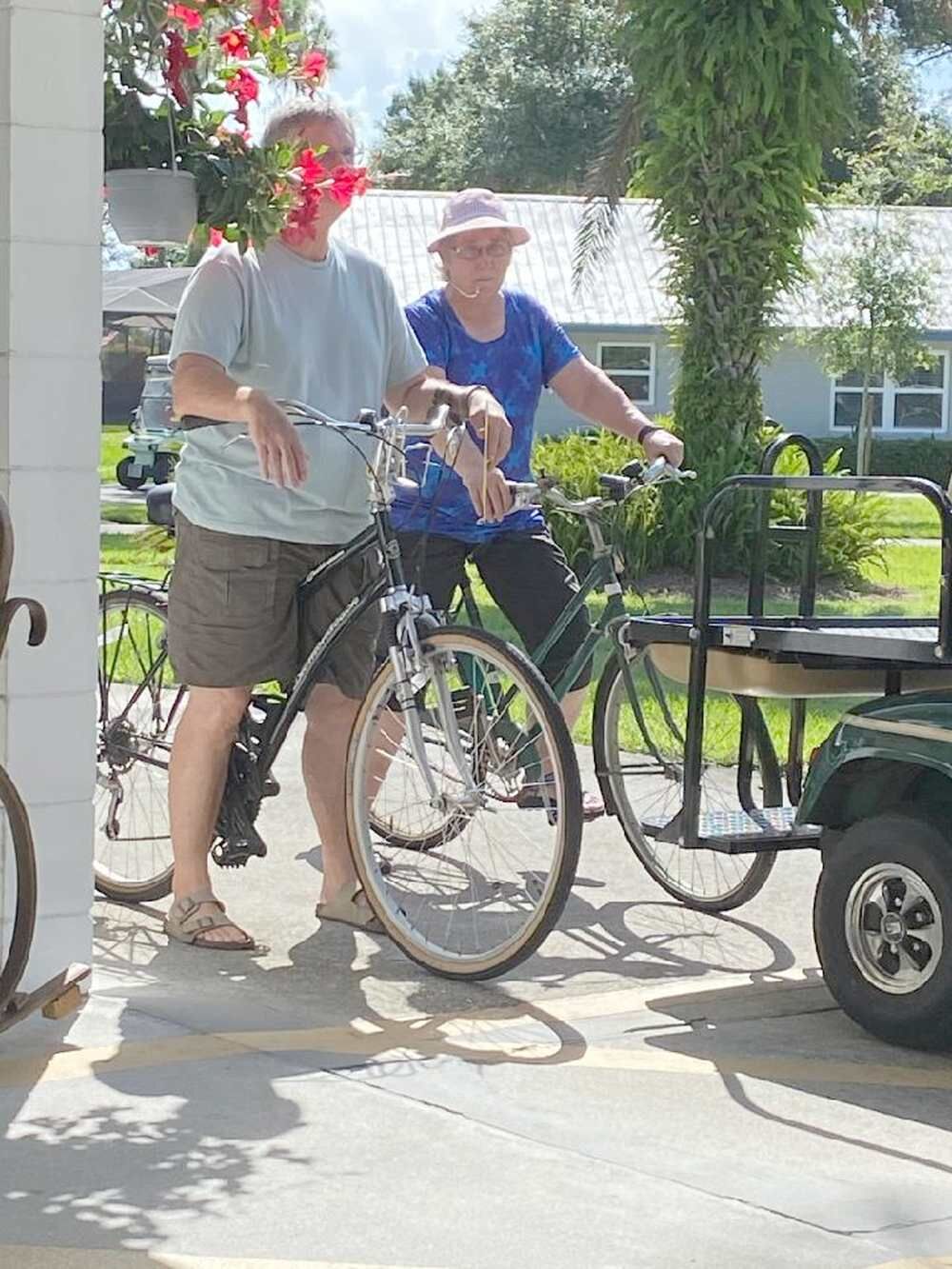 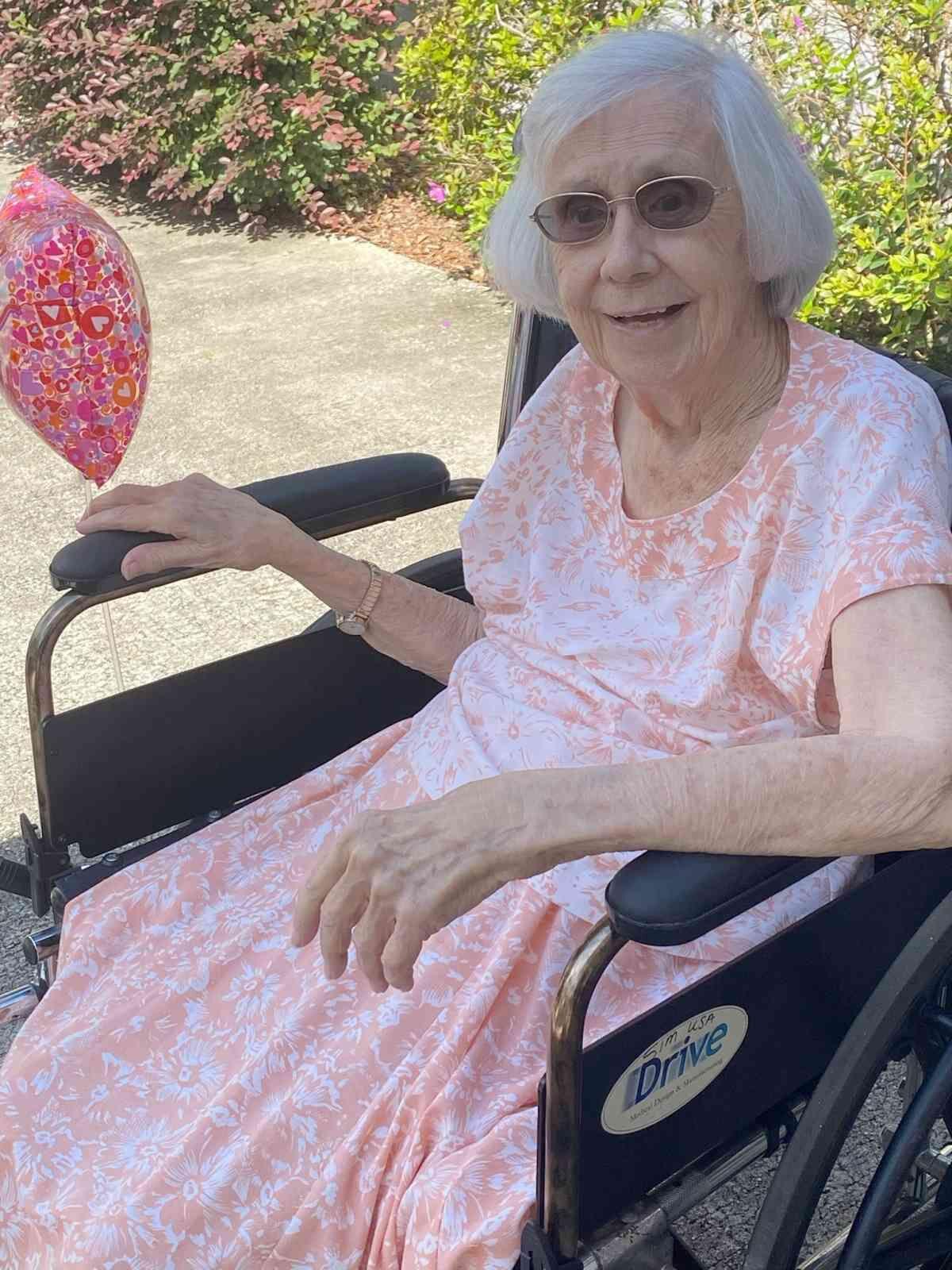 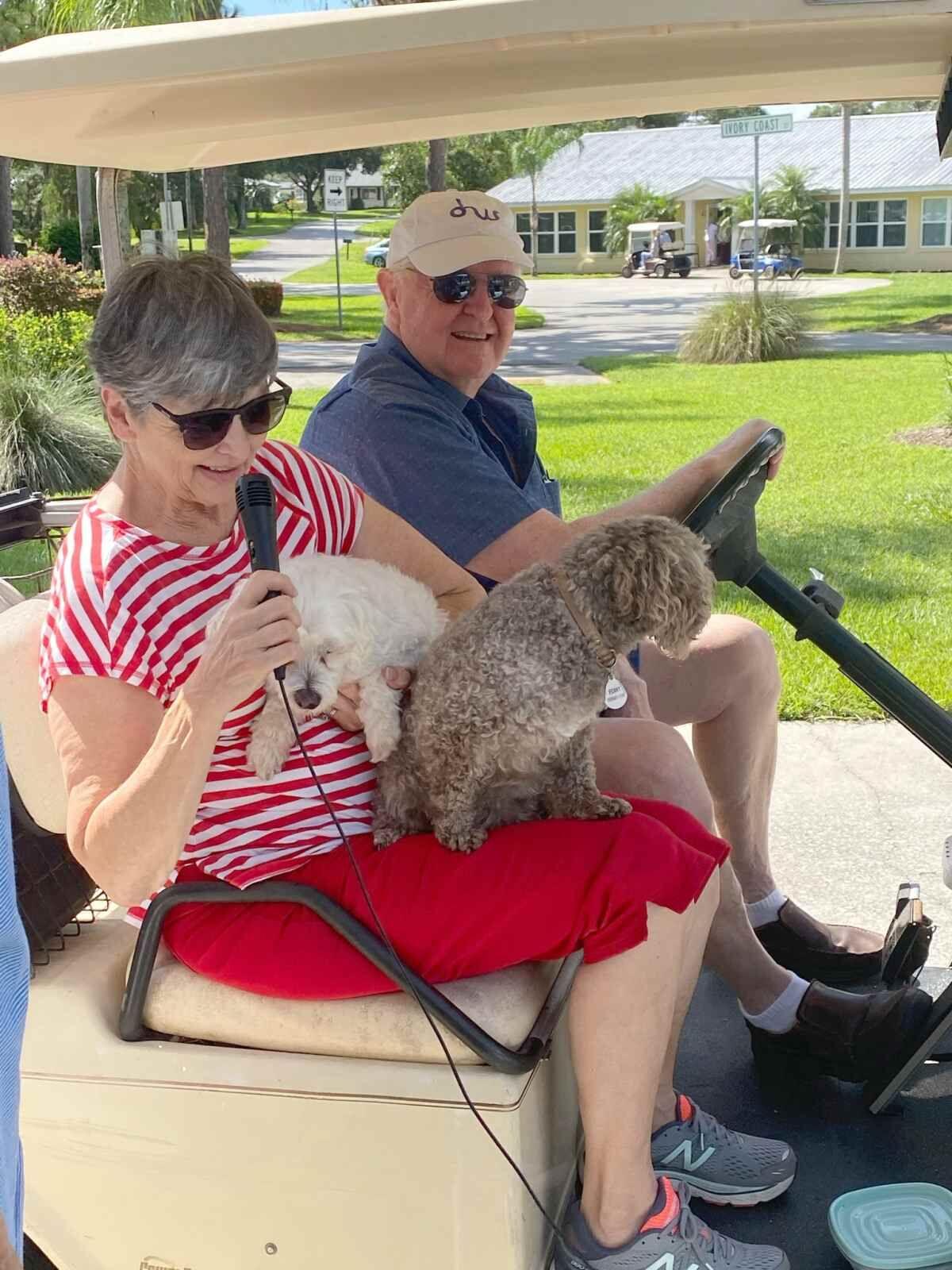 Jack and Cathy Rendel with Sparky and Penny. 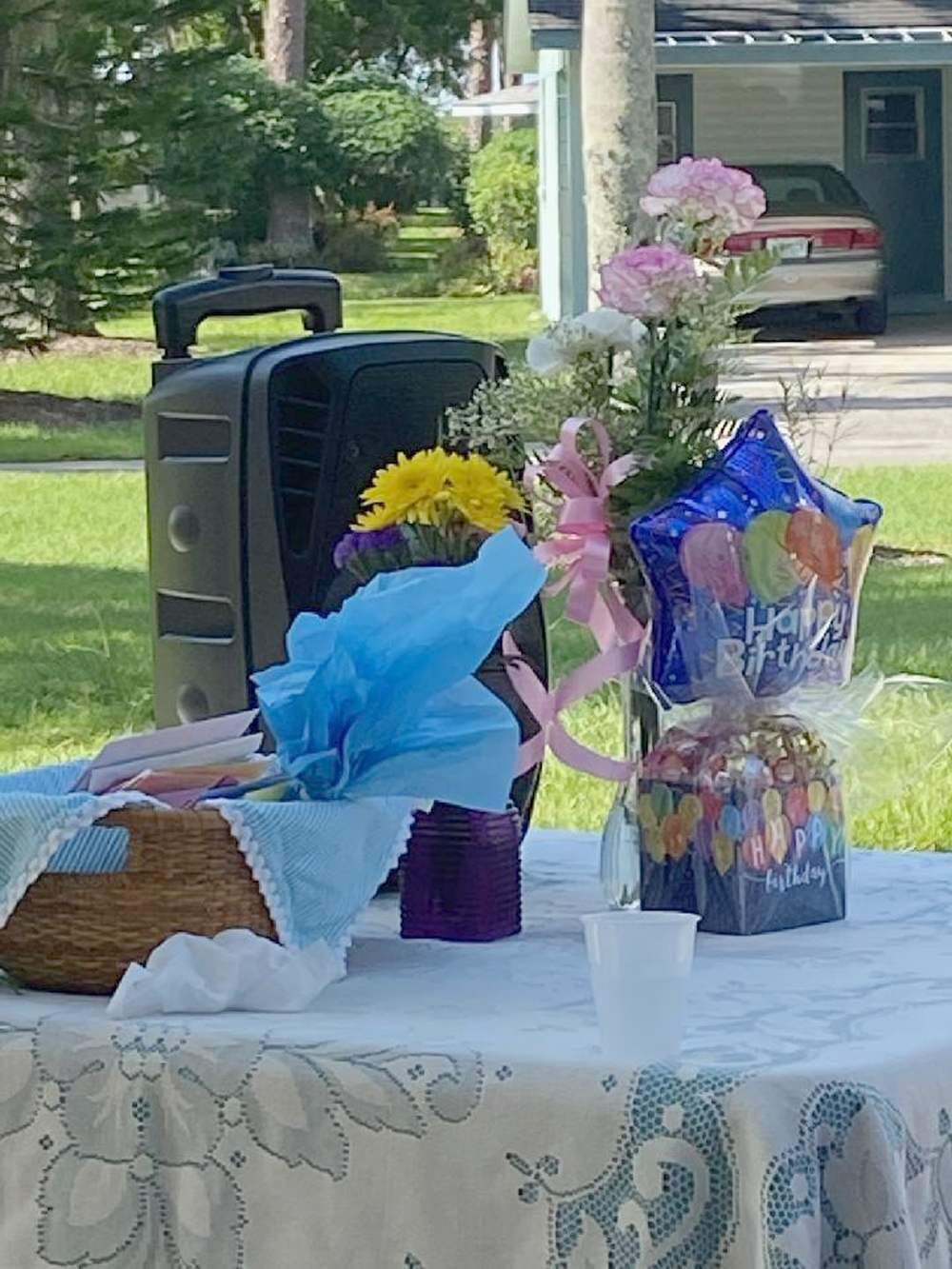 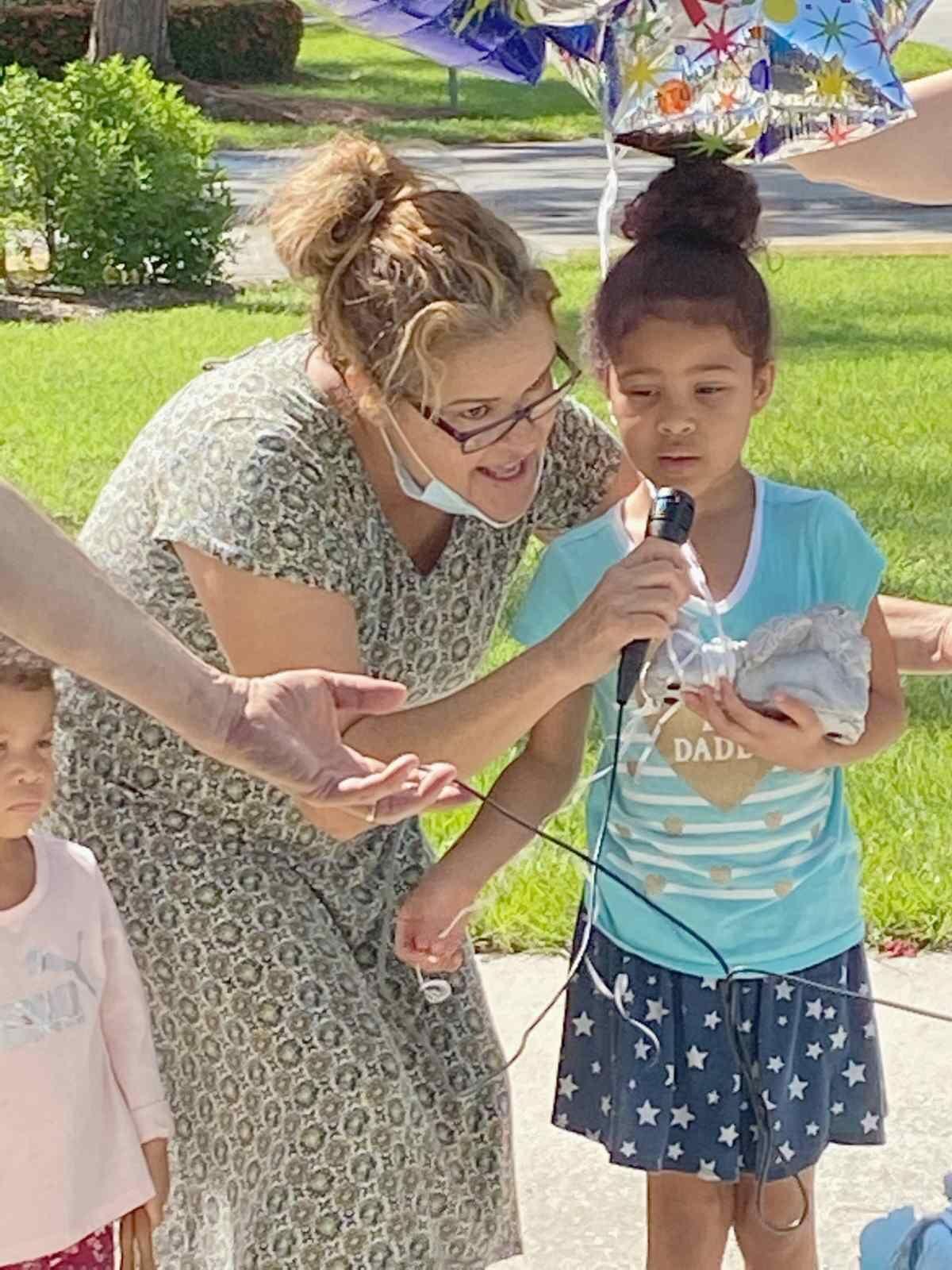 Martha Oliveras holding microphone for Tiana Maxinn who is singing “Jesus Loves Me” to Doris. 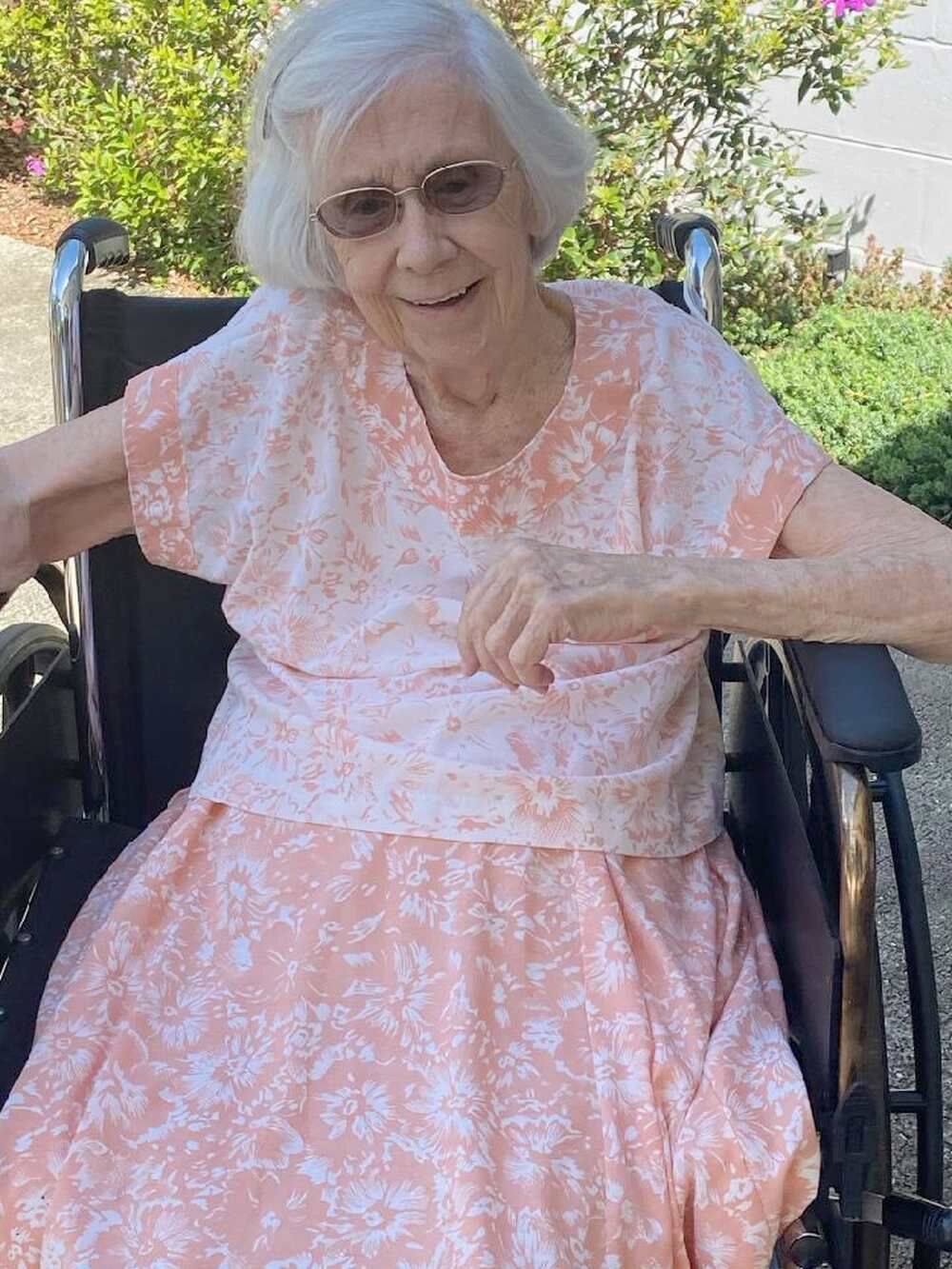 Doris DeHart with a big smile.

Friends in cart with banner.

Jack and Cathy Rendel with Sparky and Penny.

Martha Oliveras holding microphone for Tiana Maxinn who is singing “Jesus Loves Me” to Doris.

Doris DeHart with a big smile.

What’s it like living past the century mark? Can you image the changes that have taken place during 103 years?

Popular songs in 1918 were the ‘Tiger Rag’, ‘After You’ve Gone’ and ‘Rock-A-Bye’. Bread cost seven cents, eggs were $.34 and a quart of milk was nine cents. Cars were just becoming a viable transportation option with the Ford Model T being the most popular at a cost of approximately $500.

Doris DeHart was born on July 11, 1918. She lives in the SIM village in Sebring. This area is home to many African missionaries and according to her friends, Doris was one of the very best. The village held a drive-by birthday party celebration on July 12.

People arrived in golf carts, on foot, with walkers and even on bicycles. Children and pets were also present. Everyone had a chance to visit with Doris and many sang ‘Happy Birthday’ and brought gifts and cards.

“I was in the same country in Africa – Nigeria – as Doris. She is an amazing lady and we’re giving her one of our watercolor pictures for her birthday,” said Ken and Shirley Hoffman.

“She’s like a second mom to me, although she’s a little younger that my mom would be. She’s also my sewing buddy,” said Glenda.

“Glenda took Doris to Winter Haven where they would look for materials and fabrics to sew with,” said Gary.

Lura Bodwell has known Doris over 50 years. “I’ve know her since the 1970s. We lived in the same compound in Nigeria. She was the guest house cook at the Kent Academy and really enjoyed working with the children.”

Beverly Fawley has known her even longer, meeting Doris in December of 1964. “We met in Miango, Nigeria. Doris was a ‘Jill-of-all-trades’. She assisted the dentist, worked with the children and worked at the Kent Academy as the house mother. She is wonderful!”

Doris is a small women with a huge heart. There was so much love shown to her at her party. Young Tiana Maxinn sang ‘Jesus Loves Me’ to her. This brought a huge smile to her face as she loves children.

“Life is all exciting,” said Doris. “You never know what is coming next. It was fun being a dorm mom (at Kent Academy in Nigeria). I live for the Lord and my secret to a long life is staying close to Him.”

Doris says that the invention of phones and computers has been the most exciting in her lifetime. She went to Nigeria from 1945 and stayed over 30 years. Her secret vice is ice cream. She likes to have it every night with her favorite flavors being chocolate and butter pecan.

“About 20 years ago we were planning a birthday party for Doris at a restaurant. She called and said she was sick and was going to the hospital. She would not let us cancel and said ‘don’t stop the party’! We celebrated her birthday while she was at the hospital recuperating,” said Elaine Douglas.

Jeanette Silver remembered Doris as they went to the same college. “Not at the same time as she is older than me. She was a gentle and quiet lady who worked very hard as a house mother in the dorm at Kent Academy.”

As friends drove through to visit Doris and wish her a happy 103rd birthday, one of her friends said, “We love you Doris and are always thinking about you. We brought some ice cream for you!”