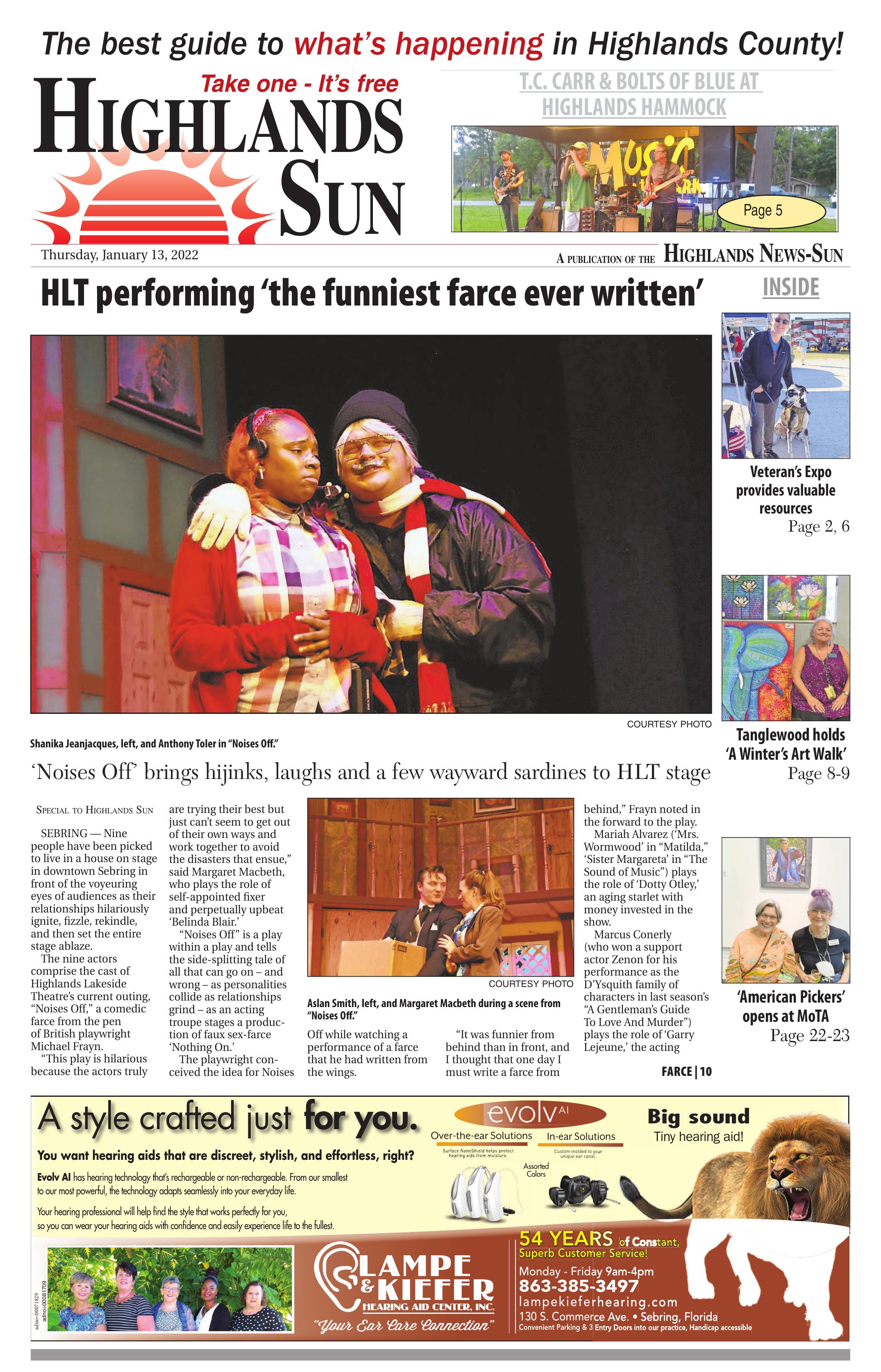 Aslan Smith, left, and Margaret Macbeth during a scene from “Noises Off.”

Shanika Jeanjacques, left, and Anthony Toler in “Noises Off.”

Margaret Macbeth, left, and Andrew Macbeth perform a scene from “Noises Off.”

Aslan Smith in “Noises Off.”

SEBRING — Nine people have been picked to live in a house on stage in downtown Sebring in front of the voyeuring eyes of audiences as their relationships hilariously ignite, fizzle, rekindle, and then set the entire stage ablaze.

The nine actors comprise the cast of Highlands Lakeside Theatre’s current outing, “Noises Off,” a comedic farce from the pen of British playwright Michael Frayn.

“This play is hilarious because the actors truly are trying their best but just can’t seem to get out of their own ways and work together to avoid the disasters that ensue,” said Margaret Macbeth, who plays the role of self-appointed fixer and perpetually upbeat ‘Belinda Blair.’

“Noises Off” is a play within a play and tells the side-splitting tale of all that can go on – and wrong – as personalities collide as relationships grind – as an acting troupe stages a production of faux sex-farce ‘Nothing On.’

The playwright conceived the idea for Noises Off while watching a performance of a farce that he had written from the wings.

“It was funnier from behind than in front, and I thought that one day I must write a farce from behind,” Frayn noted in the forward to the play.

Mariah Alvarez (‘Mrs. Wormwood’ in “Matilda,” ‘Sister Margareta’ in “The Sound of Music”) plays the role of ‘Dotty Otley,’ an aging starlet with money invested in the show.

Marcus Conerly (who won a support actor Zenon for his performance as the D’Ysquith family of characters in last season’s “A Gentleman’s Guide To Love And Murder”) plays the role of ‘Garry Lejeune,’ the acting troupe’s leading man who is secretly dating ‘Dotty’ and struggles with neurotic tendencies and a stutter when not performing a character.

Aslan Smith (winner of last season’s Zenon for cameo performance for his role as ‘Herr Zeller’ in “The Sound of Music”) plays the part of ‘Freddy Fellowes,’ a less experienced actor with fear of violence and a phobia to the touch and smell of sardines — character traits that provide ample laughs in a play filled with pratfalls and dozens of trays of wayward sardines. A fling with ‘Dotty’ and ‘Freddy’ help fuel the romantic chaos that comically ensues in the second act.

Andrew Macbeth (winner of best actor last season for his role in “A Gentleman’s Guide To Love And Murder”) plays the role of domineering and elitist director ‘Lloyd Dallas’ who struggles with his cast and crew as “Noises Off” falls apart around him.

Each of the three acts of “Noises Off” contains a performance of the first act of the play within a play, ‘Nothing On.’ Act One is set at the technical rehearsal where the cast is hopelessly unprepared. Troublesome props, especially sardines, are misplaced and mishandled. Act Two is a Wednesday matinee a month later and provides a view of the mishaps taking place backstage. Act Three is several weeks later; relationships between the cast have deteriorated and the sardines have taken personalities of their own.

Much of the comedy emerges from the subtle variations in each version as character flaws play off each other off-stage to undermine on-stage performance, with a great deal of slapstick.

Alysia Anders plays ‘Brooke Ashton’, a novice actress who plays a tax inspector in the play within the play and who appears to have been cast by ‘Lloyd’ primarily on her ability to fill out her costume of mostly lingerie. Her tryst with ‘Lloyd’ provides a comedic conflict with ‘Lloyd’s’ other romantic interest, stage manager ‘Poppy Norton.’

The part of ‘Poppy’ is played by HLT newcomer Shanika “J.J.” Jeanjacques.

Jeanjacques described ‘Poppy’ as “a very energetic and sassy young woman who is blinded and humbled by her obsession for ‘Lloyd.’”

HLT veteran actor Anthony Toler plays the role of the scene-stealing ‘Selsdon Mowbray’ – an elderly actor with a propensity to finding his way to any unattended liquor bottle. ‘Selsdon’ plays the part of a hapless burglar who stumbles drunkenly through the play.

Noises Off opens Friday (Jan. 14) on the Blackman Stage at Highlands Lakeside Theatre. The 11 performance run concludes on Jan. 30.

Tickets start at $20 for adults and $10 for youth. Some material may be inappropriate for children under 13.

Wednesday, Friday, and Saturday performances are at 7:30 pm, Sunday showings are at 2:30 p.m. Lobby doors open an hour before showtime.

Tickets may be purchased at www.highlandslakesidetheatre.org, by calling 863-382-2525, or at the Box Office Monday – Friday, 10 a.m.– 2 p.m. Highlands Lakeside Theatre is located at 356 West Center Ave., Sebring.