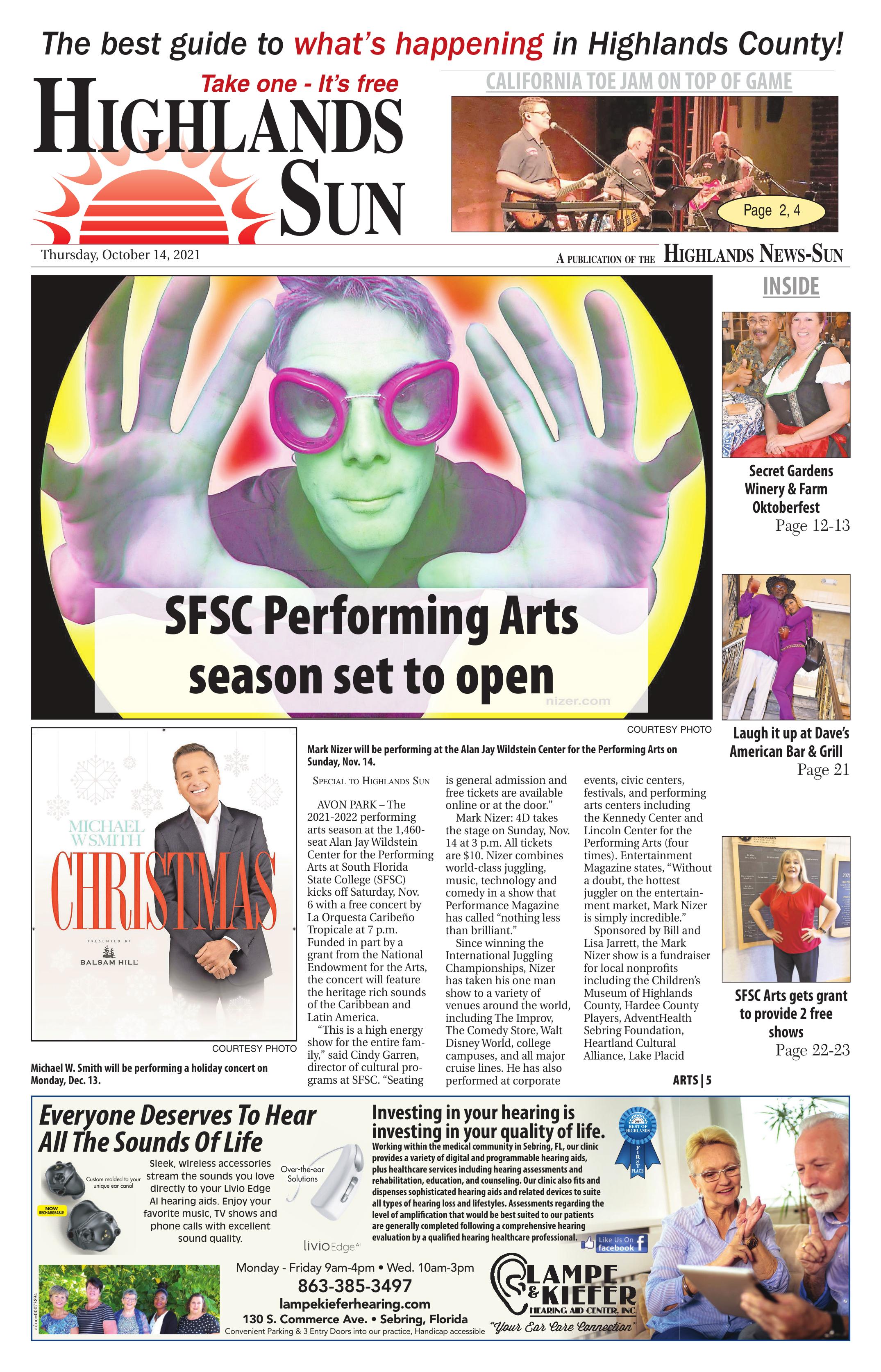 Mark Nizer will be performing at the Alan Jay Wildstein Center for the Performing Arts on Sunday, Nov. 14.

Michael W. Smith will be performing a holiday concert on Monday, Dec. 13.

Carousel in Concert, starring Ciarán Sheehan, will be at the Alan Jay Wildstein Center for the Performing Arts on Saturday, Nov. 20. Sheehan has appeared in some of the most coveted roles on Broadway including the Phantom in Phantom of the Opera and Marius in Les Miserables.

Lee Ann Womack will give an acoustic performance on Saturday, Jan. 22, 2022.

ABBA MANIA will be at the Alan Jay Wildstein Center for the Performing Arts on Friday, Feb. 18.

AVON PARK – The 2021-2022 performing arts season at the 1,460-seat Alan Jay Wildstein Center for the Performing Arts at South Florida State College (SFSC) kicks off Saturday, Nov. 6 with a free concert by La Orquesta Caribeño Tropicale at 7 p.m. Funded in part by a grant from the National Endowment for the Arts, the concert will feature the heritage rich sounds of the Caribbean and Latin America.

“This is a high energy show for the entire family,” said Cindy Garren, director of cultural programs at SFSC. “Seating is general admission and free tickets are available online or at the door.”

Mark Nizer: 4D takes the stage on Sunday, Nov. 14 at 3 p.m. All tickets are $10. Nizer combines world-class juggling, music, technology and comedy in a show that Performance Magazine has called “nothing less than brilliant.”

Since winning the International Juggling Championships, Nizer has taken his one man show to a variety of venues around the world, including The Improv, The Comedy Store, Walt Disney World, college campuses, and all major cruise lines. He has also performed at corporate events, civic centers, festivals, and performing arts centers including the Kennedy Center and Lincoln Center for the Performing Arts (four times). Entertainment Magazine states, “Without a doubt, the hottest juggler on the entertainment market, Mark Nizer is simply incredible.”

Subscriptions are available for the Lampe & Kiefer Hearing Aid Center Matinee Series, Artist, Jazz, and the AdventHealth Trending Now Series. Save up to $88 with an Artist Series package to all nine performances including: Carousel in Concert starring Ciarán Sheehan (Broadway’s phantom); Country Christmas with The Gatlins Brothers; Elvis Birthday Bash; World of Musicals; Lee Ann Womack; Tango Fire; The Simon & Garfunkel Story; Rhythm of the Dance; and Neil Berg’s 50 Years of Rock & Roll.

“One of the best deals with the subscription package is saving 15% on our special events, Michael W. Smith Christmas and ABBA MANIA,” said Garren.

Group sales are available for most performances. A group of 12 gets a free ticket plus a generous discount. “A group can be a girls’ night out, a family celebration, an office party, or a social club outing,” explained Garren. “We will announce your group from the stage and recognize your special occasion.” For group information, go to sfscARTS.org/group.

The Alan Jay Wildstein Center for the Performing Arts is located on the Highlands Campus of South Florida State College at 600 West College Drive in Avon Park. Tickets, videos, and performance information can be found online at sfscARTS.org. The SFSC Box Office phone number is 863-784-7178.