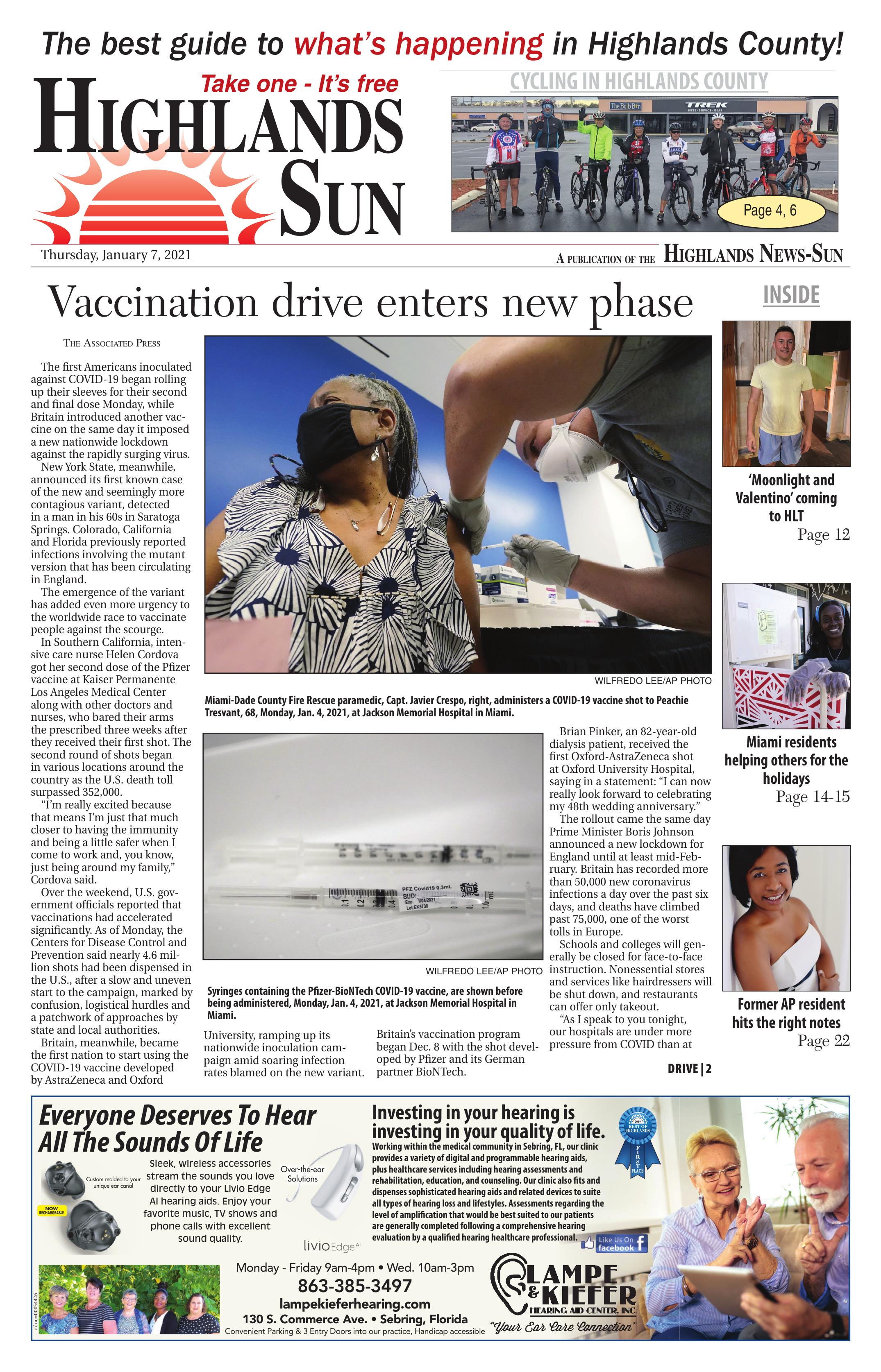 The first Americans inoculated against COVID-19 began rolling up their sleeves for their second and final dose Monday, while Britain introduced another vaccine on the same day it imposed a new nationwide lockdown against the rapidly surging virus.

New York State, meanwhile, announced its first known case of the new and seemingly more contagious variant, detected in a man in his 60s in Saratoga Springs. Colorado, California and Florida previously reported infections involving the mutant version that has been circulating in England.

The emergence of the variant has added even more urgency to the worldwide race to vaccinate people against the scourge.

In Southern California, intensive care nurse Helen Cordova got her second dose of the Pfizer vaccine at Kaiser Permanente Los Angeles Medical Center along with other doctors and nurses, who bared their arms the prescribed three weeks after they received their first shot. The second round of shots began in various locations around the country as the U.S. death toll surpassed 352,000.

“I’m really excited because that means I’m just that much closer to having the immunity and being a little safer when I come to work and, you know, just being around my family,” Cordova said.

Over the weekend, U.S. government officials reported that vaccinations had accelerated significantly. As of Monday, the Centers for Disease Control and Prevention said nearly 4.6 million shots had been dispensed in the U.S., after a slow and uneven start to the campaign, marked by confusion, logistical hurdles and a patchwork of approaches by state and local authorities.

Britain, meanwhile, became the first nation to start using the COVID-19 vaccine developed by AstraZeneca and Oxford University, ramping up its nationwide inoculation campaign amid soaring infection rates blamed on the new variant. Britain’s vaccination program began Dec. 8 with the shot developed by Pfizer and its German partner BioNTech.

The rollout came the same day Prime Minister Boris Johnson announced a new lockdown for England until at least mid-February. Britain has recorded more than 50,000 new coronavirus infections a day over the past six days, and deaths have climbed past 75,000, one of the worst tolls in Europe.

Schools and colleges will generally be closed for face-to-face instruction. Nonessential stores and services like hairdressers will be shut down, and restaurants can offer only takeout.

“As I speak to you tonight, our hospitals are under more pressure from COVID than at any time since the start of the pandemic,” Johnson said.

Elsewhere around the world, France and other parts of Europe have come under fire over slow vaccine rollouts and delays.

France’s cautious approach appears to have backfired, leaving just a few hundred people vaccinated after the first week and rekindling anger over the government’s handling of the pandemic. The slow rollout has been blamed on mismanagement, staffing shortages over the holidays and a complex consent policy designed to accommodate vaccine skepticism among the French.

“It’s a state scandal,” Jean Rottner, president of the Grand-Est region of eastern France, said on France-2 television. “Getting vaccinated is becoming more complicated than buying a car.”

Health Minister Olivier Veran promised that by the end of Monday, several thousand people would be vaccinated, with the tempo picking up through the week. But that would still leave France well behind its neighbors.

French media broadcast charts comparing vaccine figures in various countries: In France, a nation of 67 million people, just 516 people were vaccinated in the first six days, according to the French Health Ministry. Germany’s first-week total surpassed 200,000, and Italy’s was over 100,000. Millions have been vaccinated in the U.S. and China.

The European Union likewise faced growing criticism about the slow rollout of COVID-19 shots across the 27-nation bloc of 450 million inhabitants. EU Commission spokesman Eric Mamer said the main problem “is an issue of production capacity, an issue that everybody is facing.”

The EU has sealed six vaccine contracts with a variety of manufacturers. But only the Pfizer-BioNTech vaccine has been approved for use so far across the EU. The EU’s drug regulators are expected to decide on Wednesday whether to recommend authorizing the Moderna vaccine.

In the U.S., Dr. Mysheika Roberts, health commissioner in Columbus, Ohio, said demand has been lower than expected among the people given top priority for the vaccine. For example, the city’s 2,000 emergency medical workers are all eligible, but the health department has vaccinated only 850 of them.

She said some people were hesitant to get the vaccine and wanted to see how others handled it. The vaccine also arrived the week of Christmas, and a lot of people were on vacation and didn’t want to be bothered during the holiday, she said.

“I think we all assumed that people would want this vaccine so badly, that when it became available, people would just come get it,” Roberts said.

Roberts noted there has been no effective mass marketing campaign explaining why people should get vaccinated.

“From the president on down, so many people have been touting the fact that we’re going to have a vaccine and get this vaccine out. But so many of those same people who were talking about it now have gone silent,” she said. “That could help if those same people would be more vocal about it.”