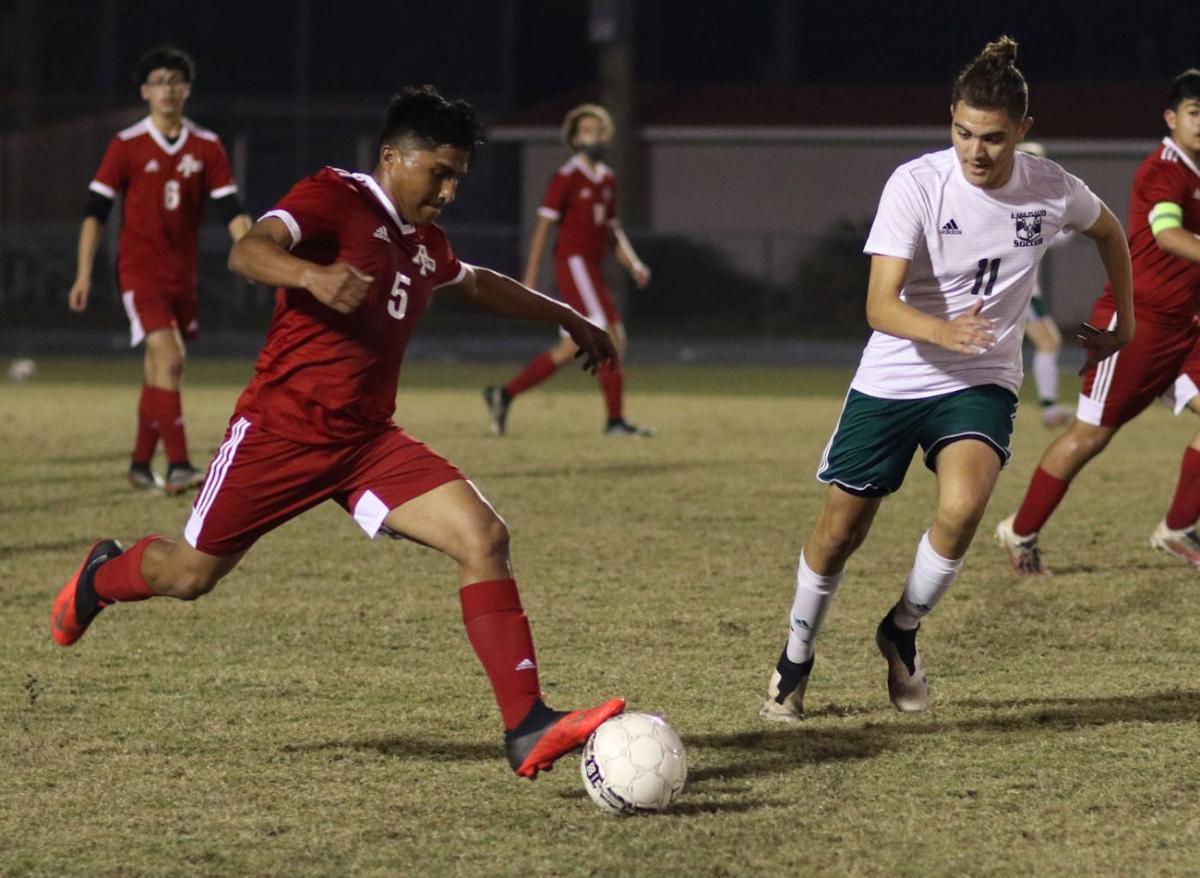 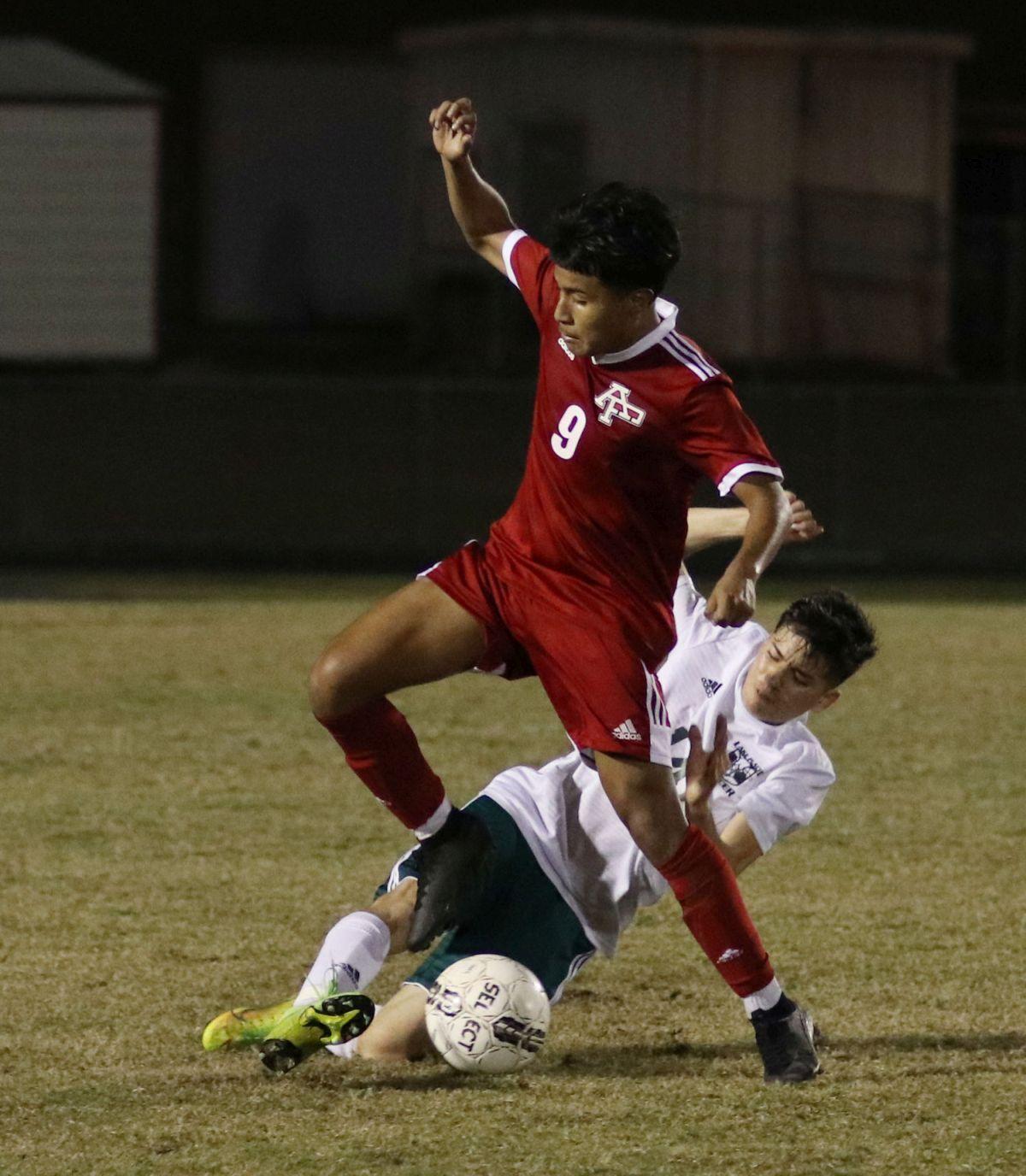 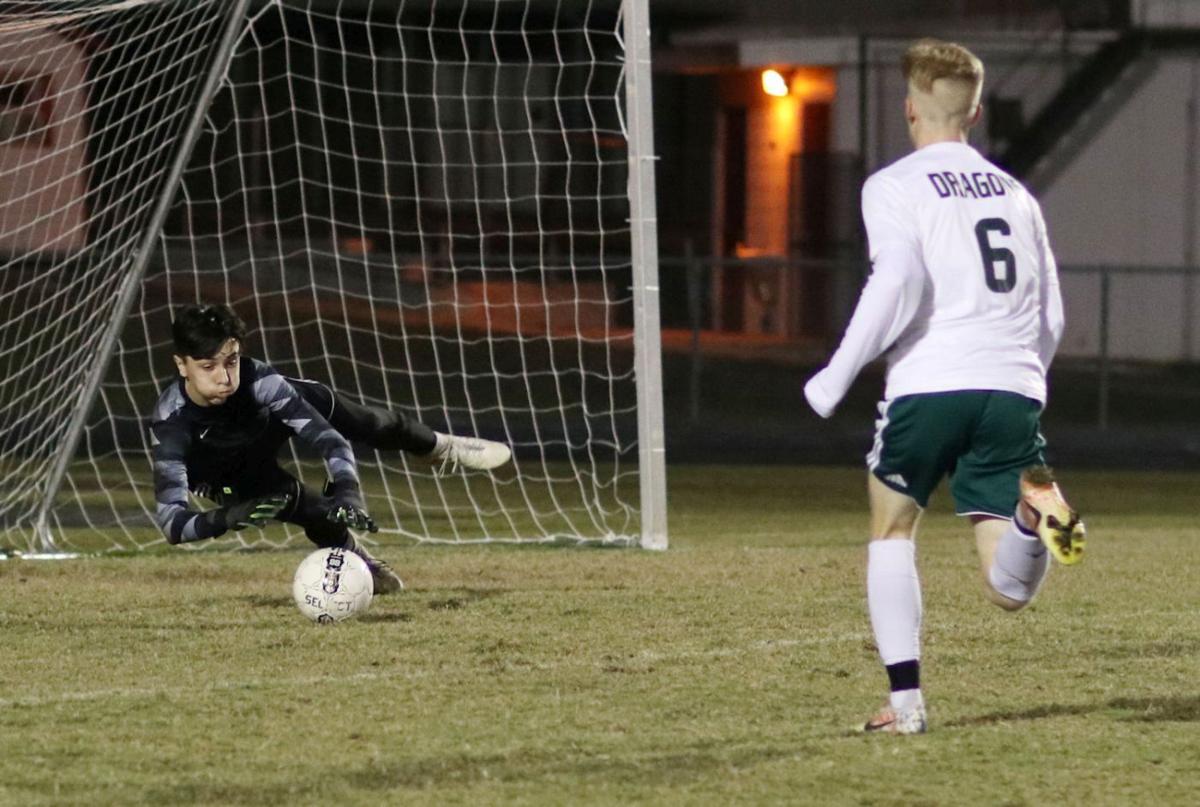 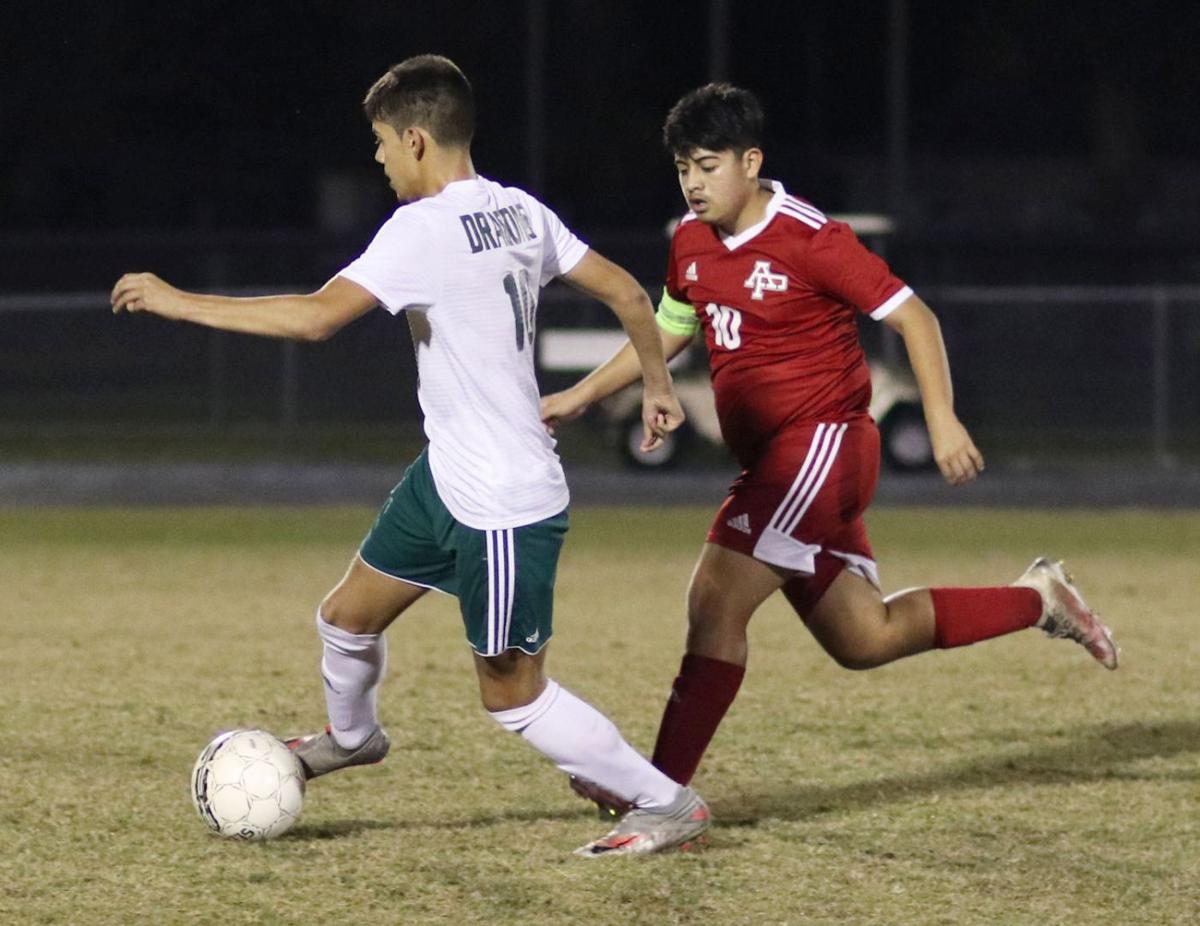 Lake Placid’s Adrian Mojica drives the ball past Avon Park’s Damian Felix during the first half. 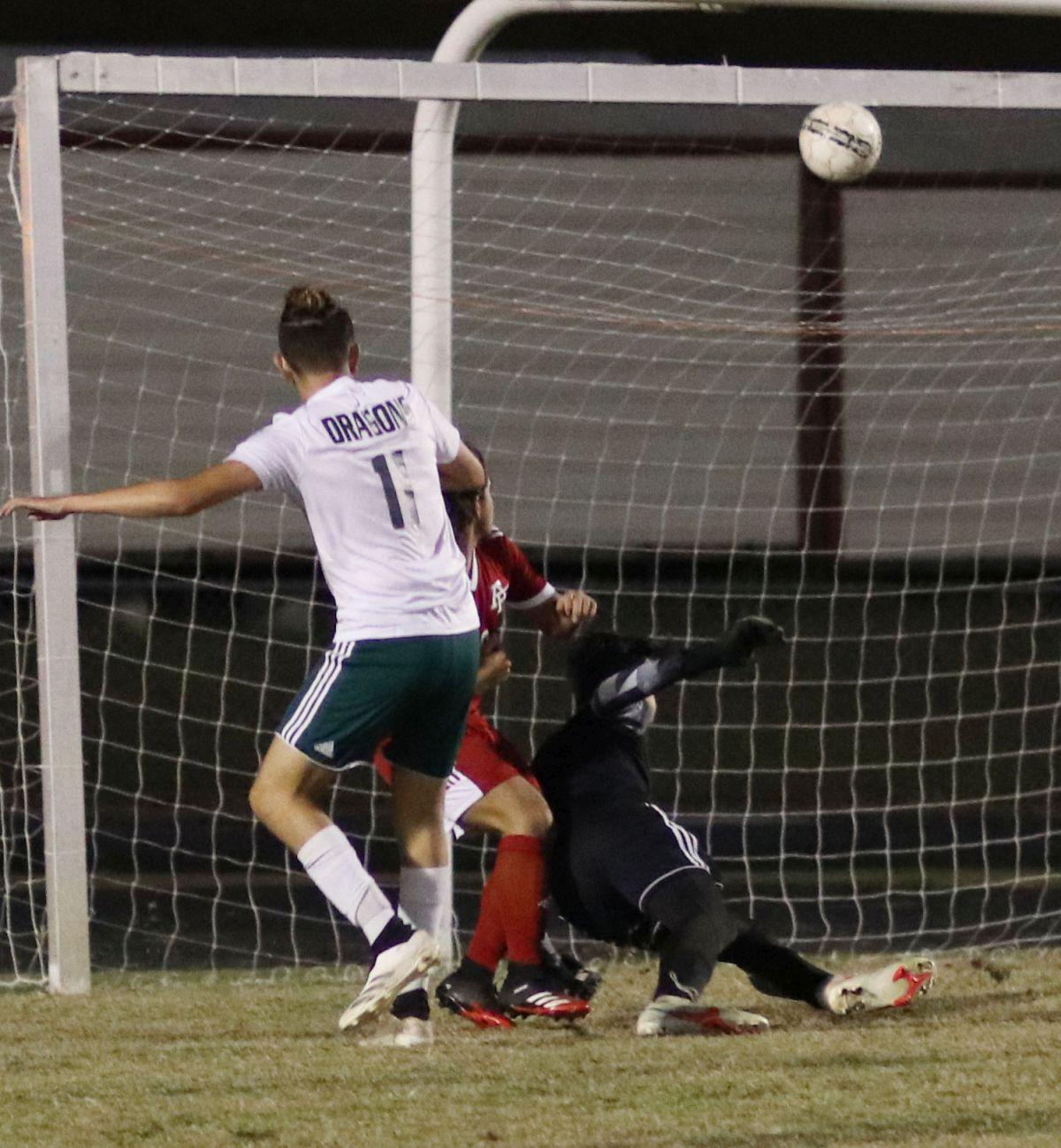 Shot attempt by Lake Placid’s Leandro Diaz Jr (11) gets past the Avon Park defender and goalkeeper, but hits the top rail to stay in play.

Lake Placid’s Adrian Mojica drives the ball past Avon Park’s Damian Felix during the first half.

Shot attempt by Lake Placid’s Leandro Diaz Jr (11) gets past the Avon Park defender and goalkeeper, but hits the top rail to stay in play.

AVON PARK — The Lake Placid Green Dragon boys soccer team survived a scrappy Avon Park Red Devil squad with a 2-1 victory on Monday at Joe Franza Stadium in Avon Park. With the win, the Green Dragons improved to 9-2-3 on the season and the Red Devils fell to 2-6-3.

“I was pleased with the guys effort,” said Avon Park Head Coach Joshua Virkler. “They played hard, they did some good things in the game. We got the luck in the first half, they got that deflection in the second half.

“That is not taking anything away from their performance, they are an excellent team, it would have been nice to get a result against them, but I am happy with the performance, not the result.”

According to Virkler, the Red Devils played a more defensive strategy, wanting to take advantage of Lake Placid mistakes that could lead to breaks and shot opportunities.

Lake Placid for the first 31 minutes of the first half controlled the ball the majority of the time near midfield or occupying Red Devil territory that led to several shot opportunities for the Green Dragons.

The first at six minutes in, Lake Placid was called offsides, eight minutes in Leandro Diaz Jr. hit the top of the goal to miss and 11 minutes in Daniel Andino just missed wide right.

Near the mid-point of the first half, Jose Vargas missed wide right and six minutes later, Adrian Mojica shot sailed over the net and with 12 minutes left in the first half, a pass from the left side by Max Troutman to Edson Becerra was just long.

The break the Red Devils were looking for came with a little under eight minutes in the first half when Bryan Sanchez-Guzman got control of the ball near midfield for the break away up the middle. From about 15 yards out, Sanchez-Guzman buried a shot into the right side of the goal to give the Red Devils a 1-0 lead.

Lake Placid came back with a flurry, Edwin Reyes had his shot blocked by Avon Park’s Wesley Hair in a diving save, but was unable to stop Becerra’s shot a couple minutes later from the right side into the left side of the goal to tie the game at one before going into the half.

The second half resembled the first except the Red Devils were unable to convert the breaks and Lake Placid scored 18 minutes in when Mojica from the left side cross passed to Becerra on the right side to take and make the shot from 10 yards out to put the Green Dragons up 2-1.

With time being kept on the field, Avon Park had one opportunity on a 35-yard freekick by Kaleb Ramos that sailed a little high and to the right as Lake Placid held on for the 2-1 win.

“Our guys put some combination plays together and they played defense very well,” Said Virkler, “Wesley (Hair), our goalkeeper, has been a revelation this year, he had 12 saves, he kept us in the game, if you had to single out a player right now, it would be him.”

“Another player is Kennette Esquillin, he has been the heart and soul of this team the last couple of games. He is our centerback back and he has just been excellent, he has been safe and not made many mistakes.”

Avon Park travels to play Moore Haven on Friday and Lake Placid is home against Bishop Verot on Friday.