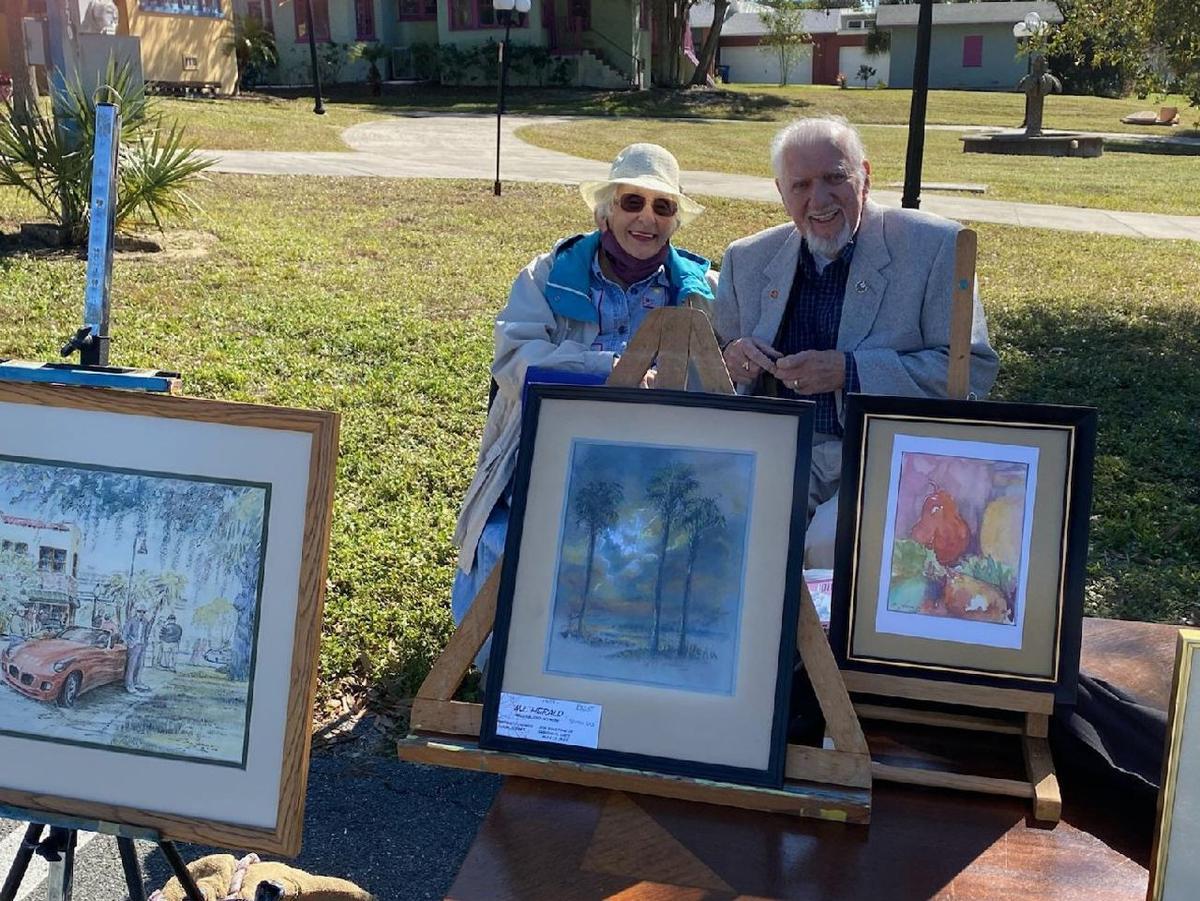 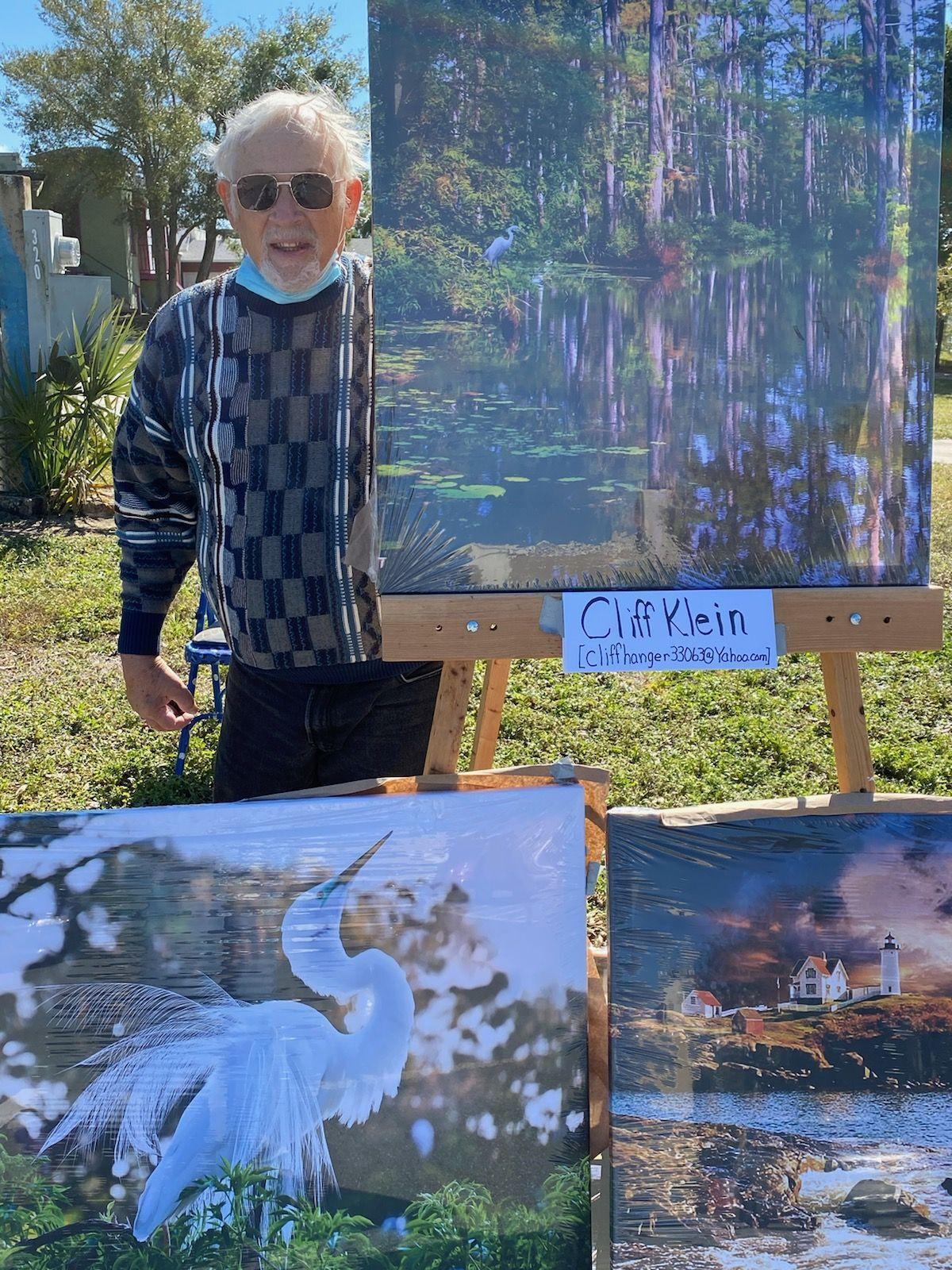 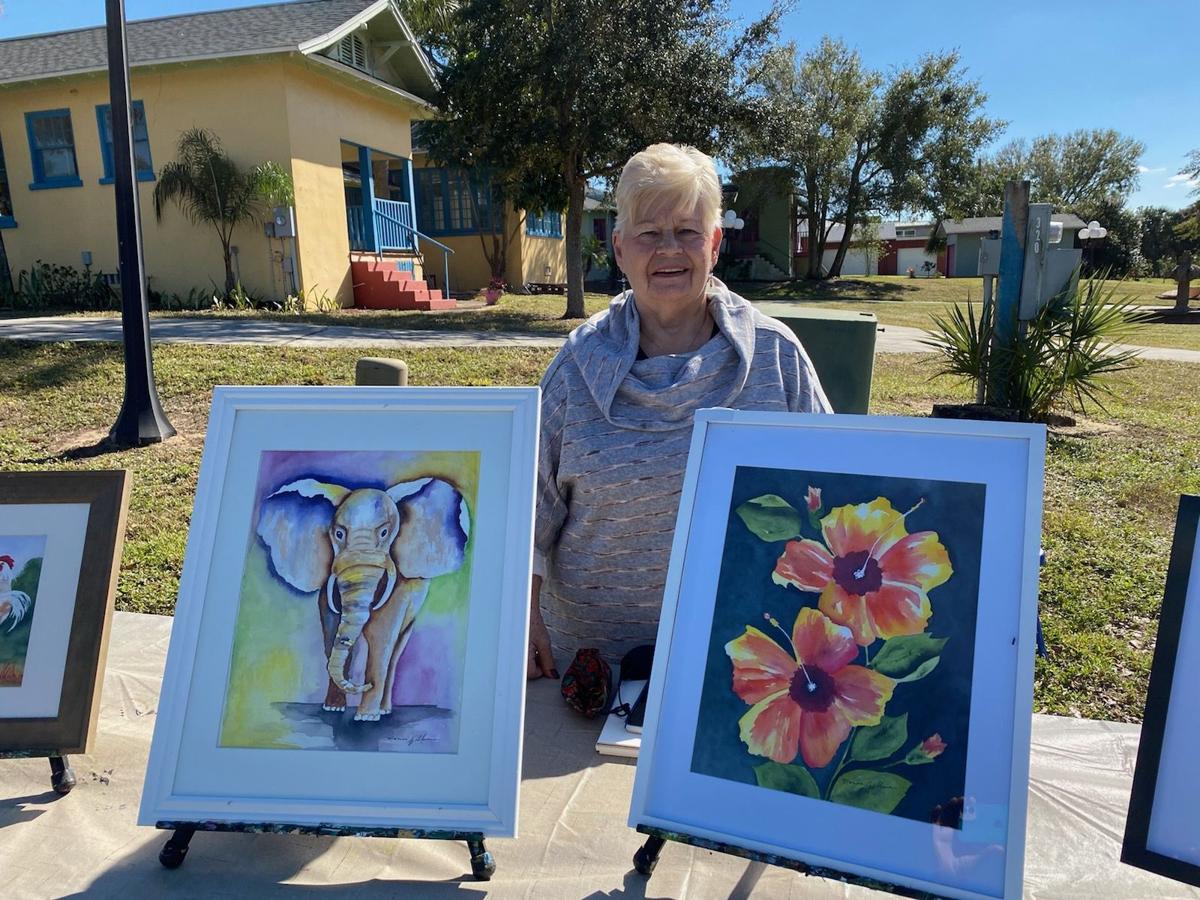 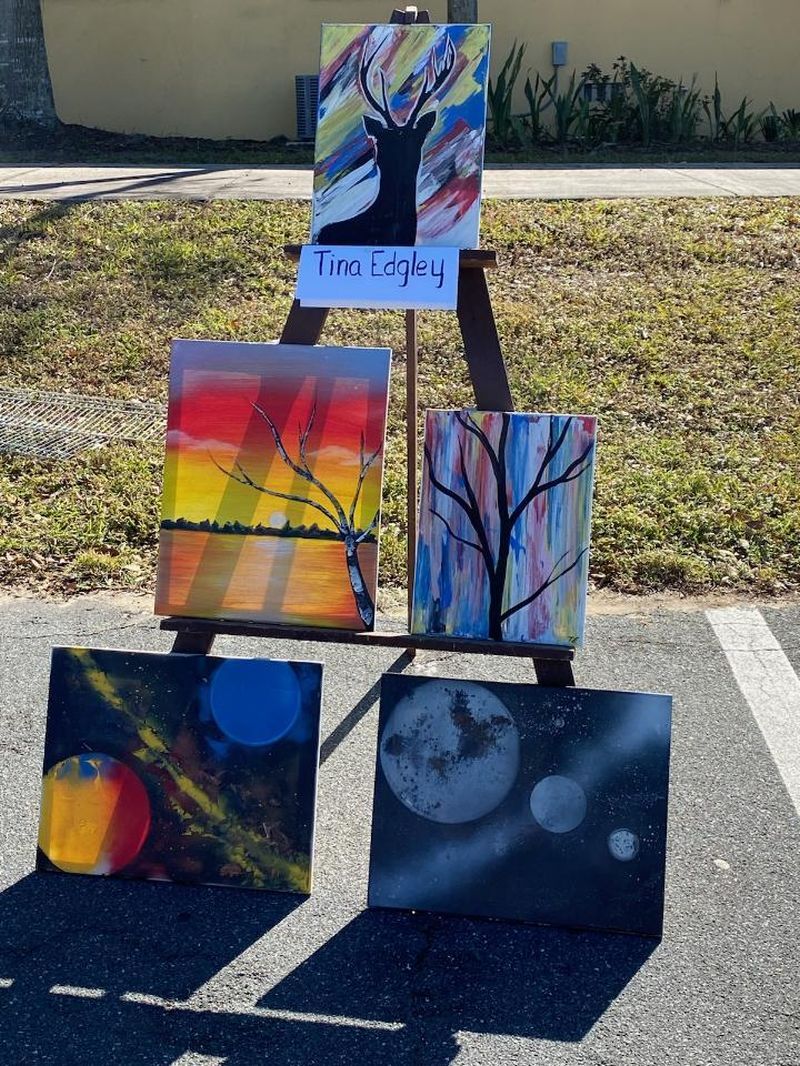 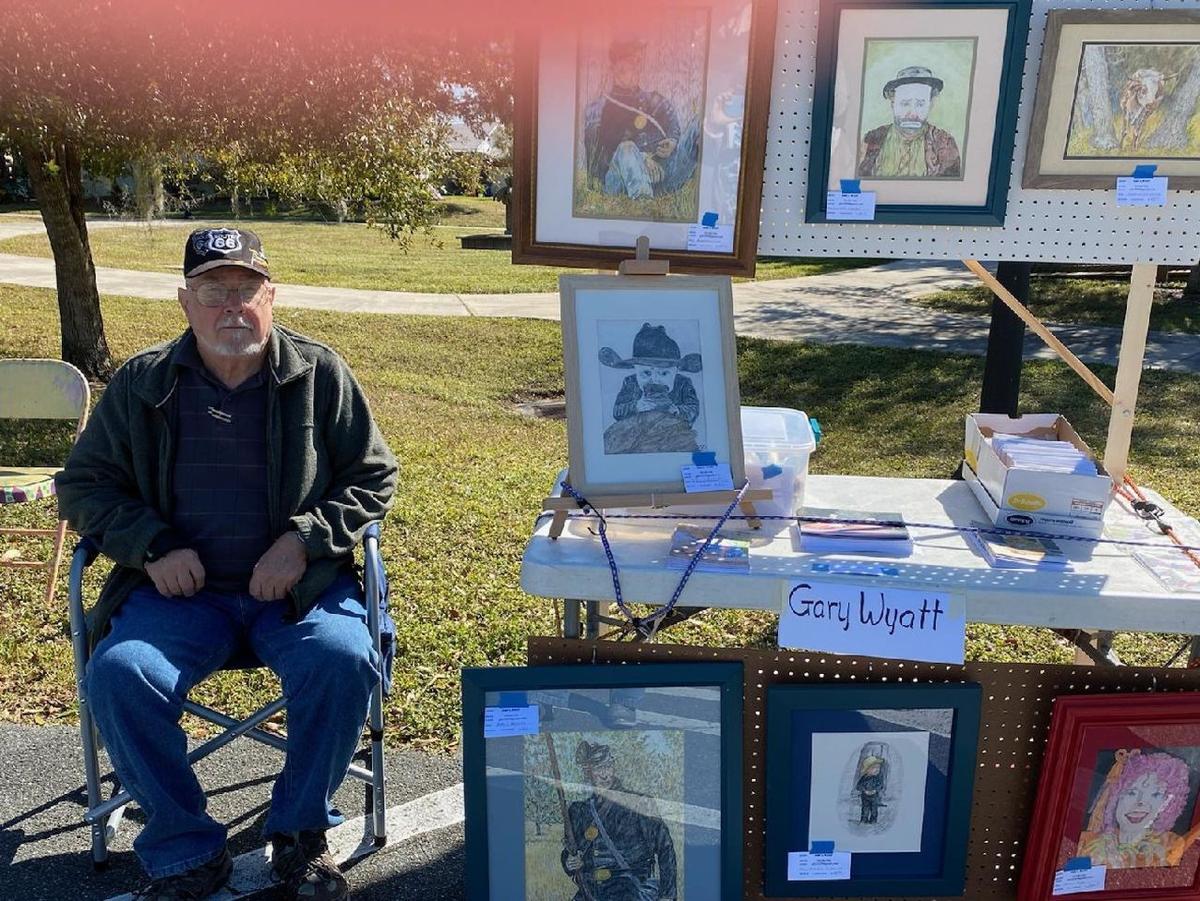 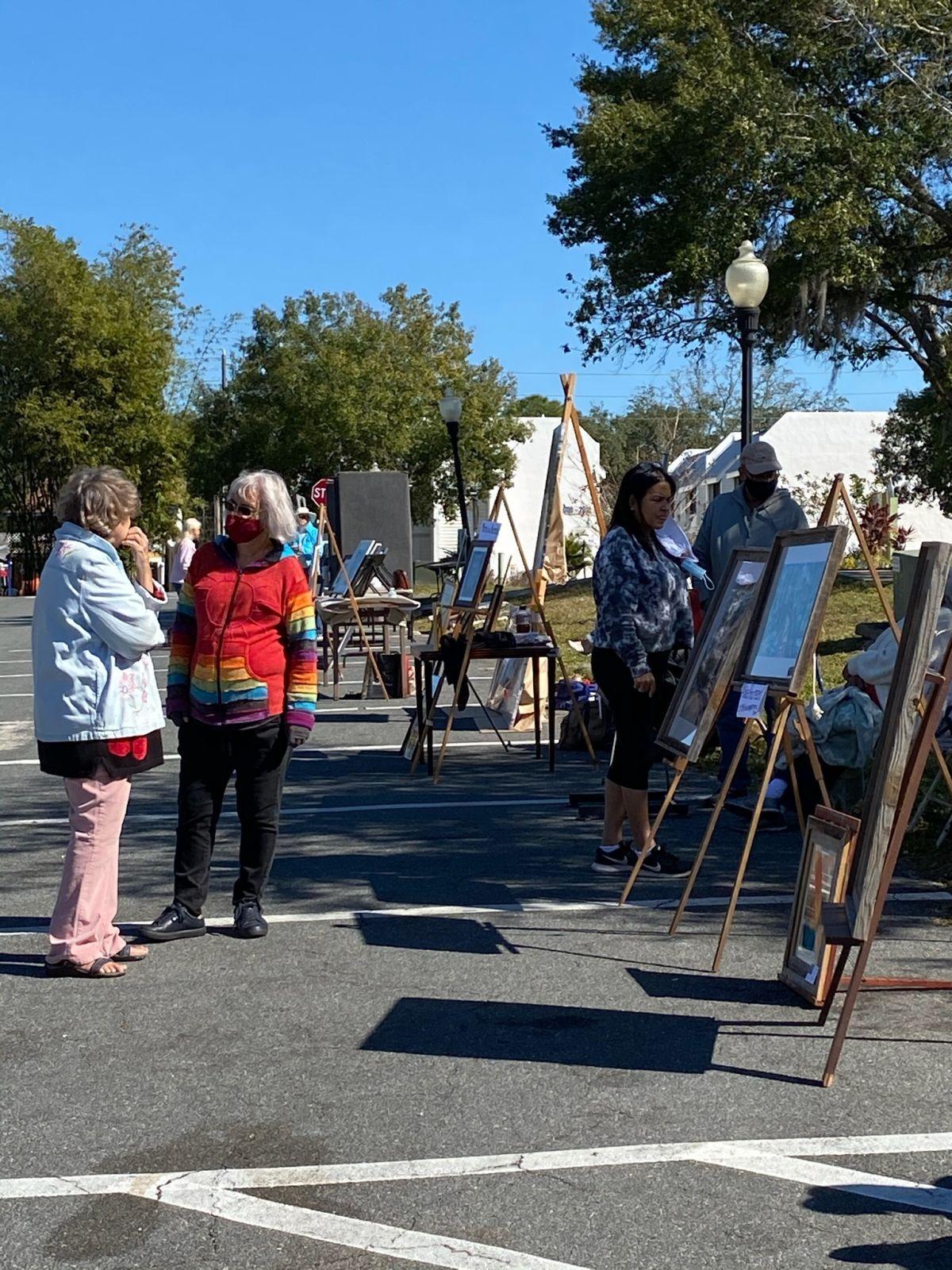 Guests at the event. 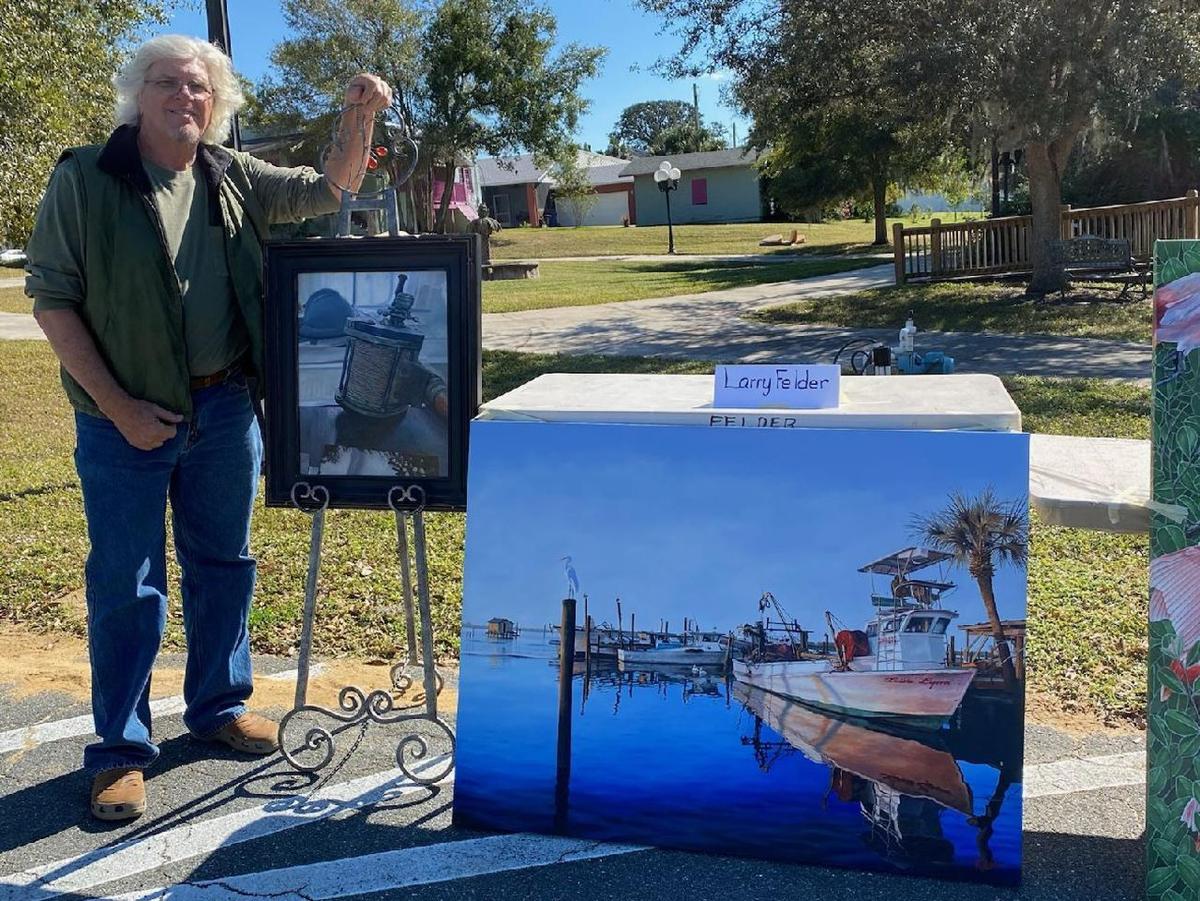 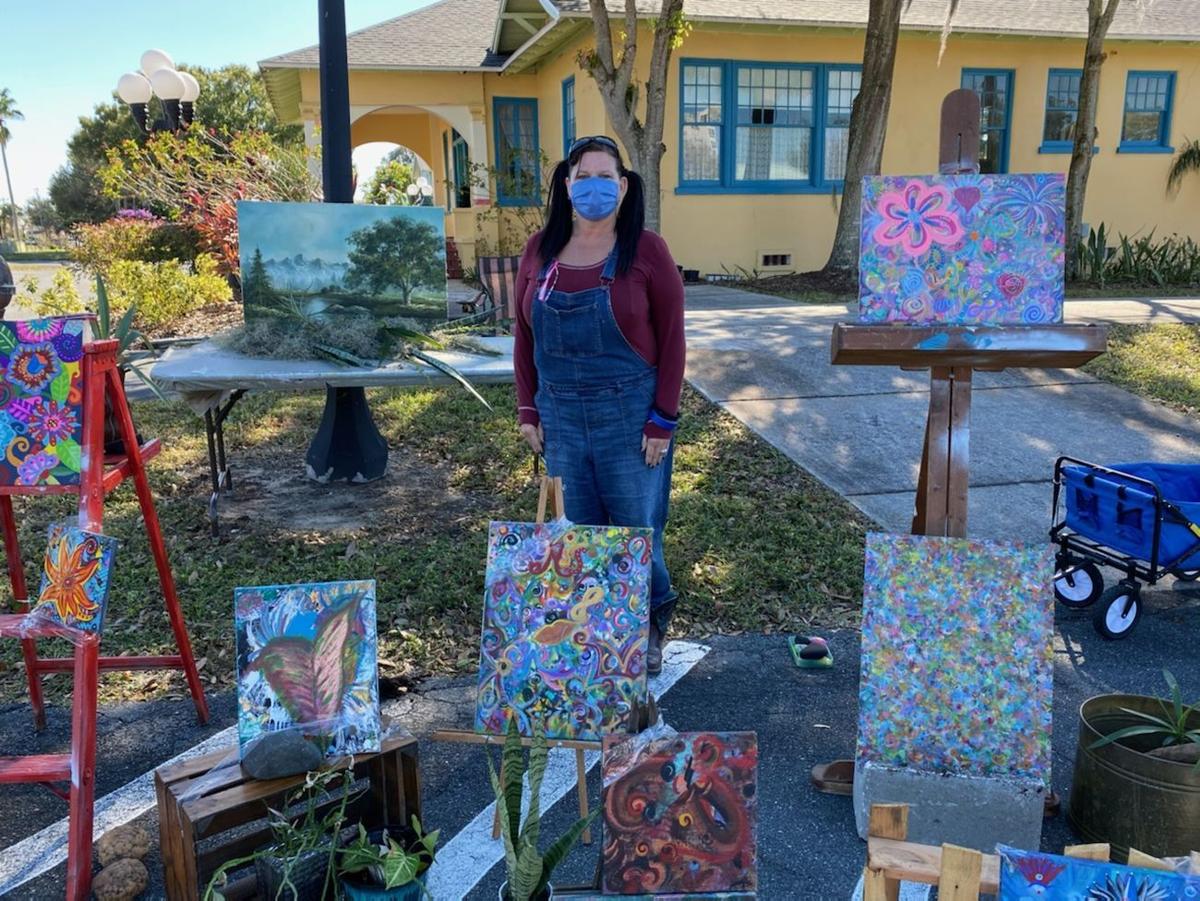 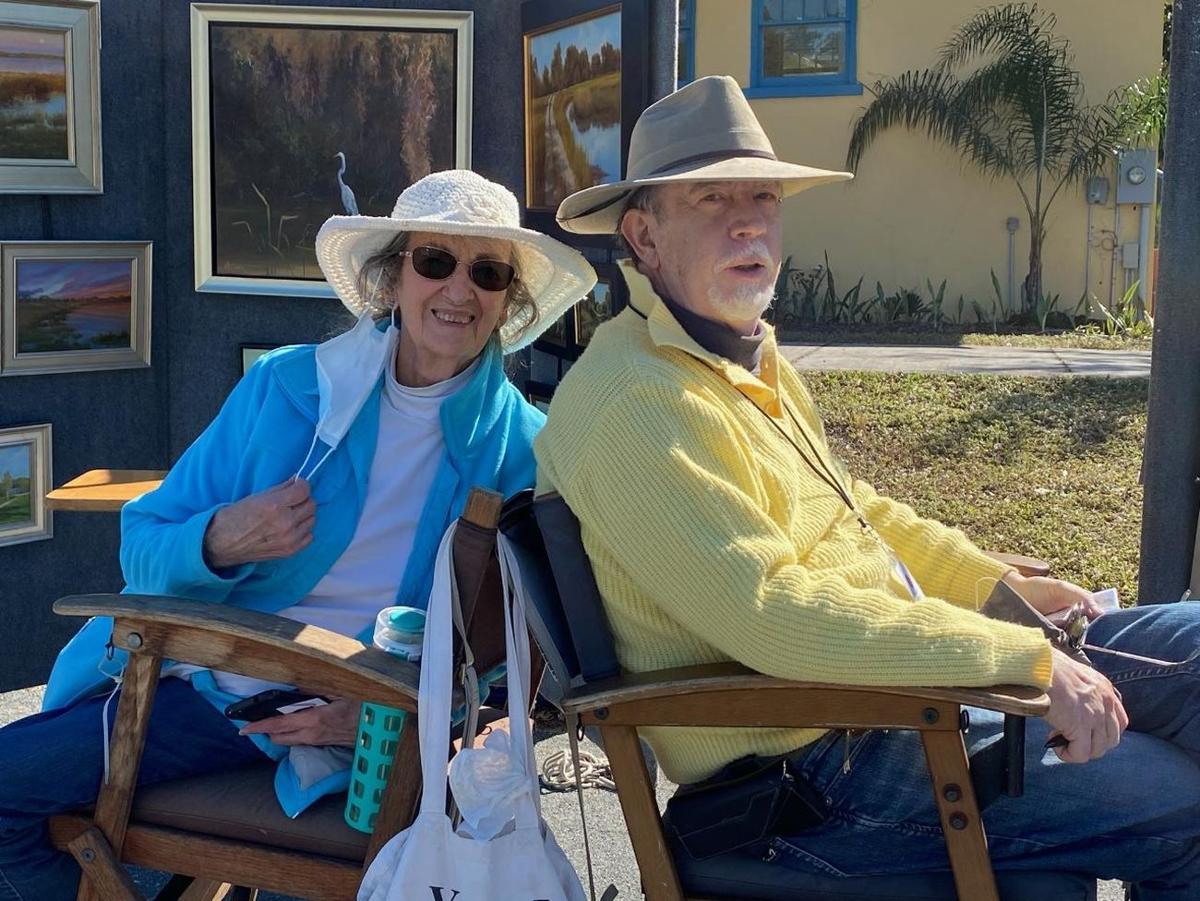 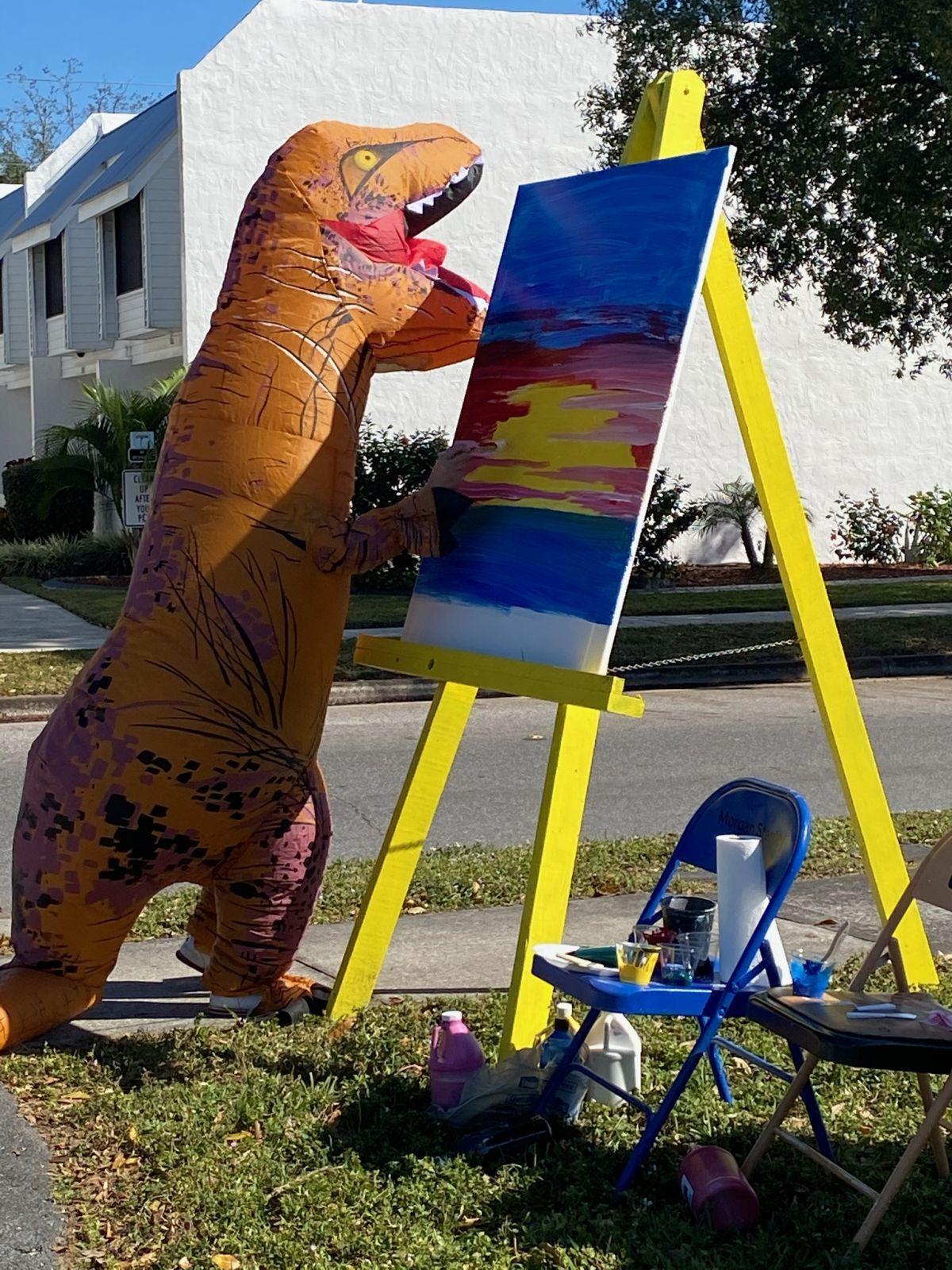 The painting dinosaur (aka Beverly Marshall). 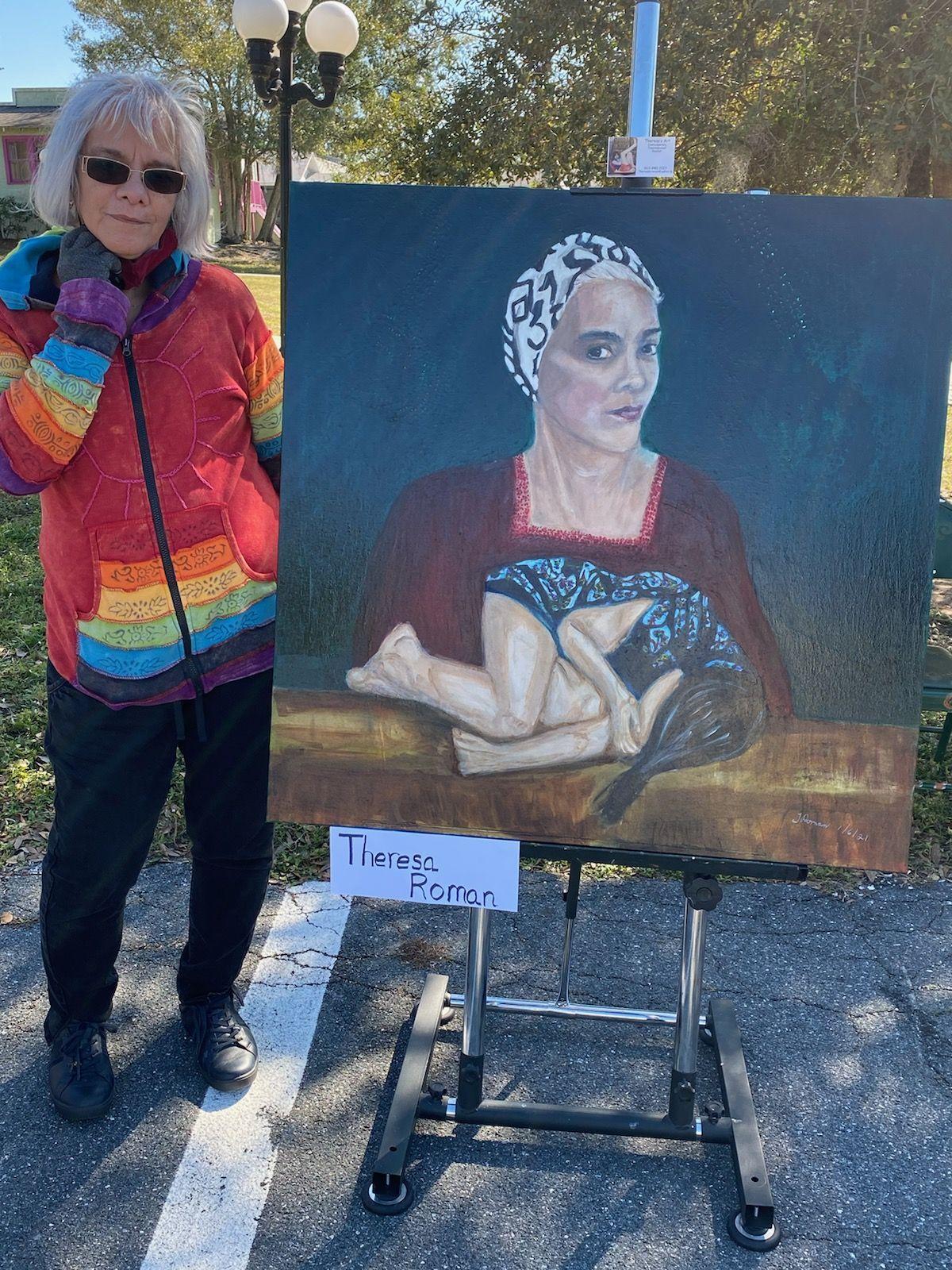 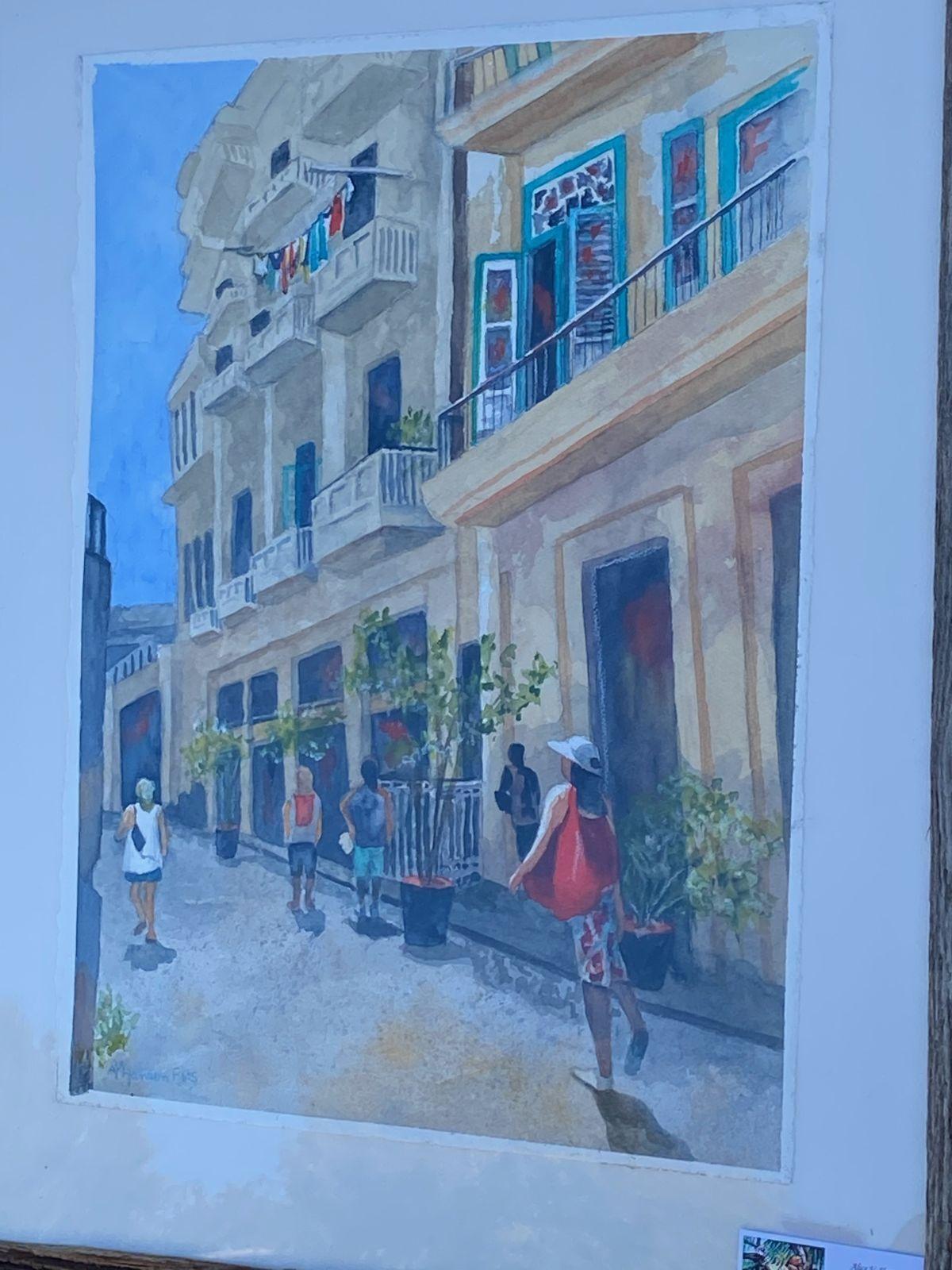 Guests at the event.

The painting dinosaur (aka Beverly Marshall).

With events of all types being limited for safety due to COVID-19, the Highlands Art League (HAL) was proud to present their ‘Beyond the Mask’ drive-thru art exhibit. This fun event provided the community with a safe outing for all to enjoy.

On Jan. 9 the exhibit was held in the parking lot between the Historical Society Museum and the Visual Arts Center on Lakeview Drive. Tables and easels were set up so those riding in vehicles could drive by slowly to enjoy the exhibit without risking exposure to others.

Artist Mary Lou Herald brought her art work and her new fiancé, Rev. James R. McGarry. “It’s been a great life and we want to spend what time we have left together.”

While Alice Hanson’s works are all interesting and unique, one that stood out was a street scene in Cuba. “I visited Havana on a cruise. This was one of the pretty streets by where the ship was docked. We hired a guide to take us around and I took about a millions pictures.”

Cliff Klein had several large works of photography on display. “This one is of a Great White Egret from The Rookery in Orlando.”

Marion Zellers brought her watercolor paintings. “They’re so much fun to paint.” She had some flowers, an element and some other pretty selections on display.

Gary Wyatt said he joined the group at HAL since he enjoys the company of the members. “I have four pieces on display in Arcadia and three in the Arcadia County Hospital. I had a solo show last summer in New Brittany, Pennsylvania at the Merritt Gallery. I only do realism works in colored pencil.”

New HAL artist member, Larry Felder, had a gallery in Rockport, Texas. He just moved here in 2020. “This painting here (of a boat on the water) is from Cortez, Florida, near Anna Maria Island. I’ve started teaching classes at the Visual Arts Center.”

A large self-portrait by Theresa Roman titled ‘Rebirth’ was on display. “I was born again after battling cancer last year. I’ve come back bigger and stronger in a very positive way. This is my second chance and it’s the first time I’ve painted anything this personal.”

Angel Faith had an interesting display of abstract canvases. “I love to paint and also repurpose woods and plants.”

Carolyn Currie and Dennis Stuart, who were recently on exhibit at HAL’s MoTa gallery, had some of their works on display from ‘Impressions of Marsh and Shore.’

“I’m the one who focuses on the marshes; Carolyn is focused on the shore,” said Stuart. “This is a body of work as a theme. We’ve traveled the Atlantic seaboard for the last 20 years and have enjoyed some beautiful scenery in our journey.”

Gloria Peters, who is the current president of HAL, had some of her interesting works on display. They were very lively, fun and colorful.

The dinosaur artist (also known as Beverly Marshall in costume) was painting on a large canvas on Lakeview Drive. Her colorful art was attracting some people traveling along. Marshall an internationally recognized artist.

Be sure to check out the HAL website for upcoming events and receptions at www.highlandsartleague.org.