You have permission to edit this article.
Edit
Login
I want to
Publications
News
News Archives
Classifieds
E-Paper
Contact Us
Share This
1 of 3 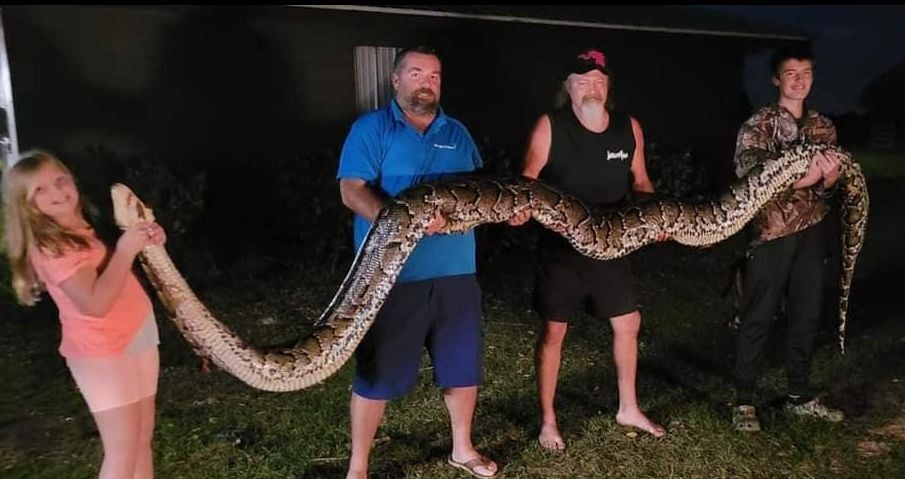 It takes a lot of people to hold a 16-foot python. From left is Tori Wilkinson, William Wilkinson, Dusty Crum and Hunter Wilkinson. 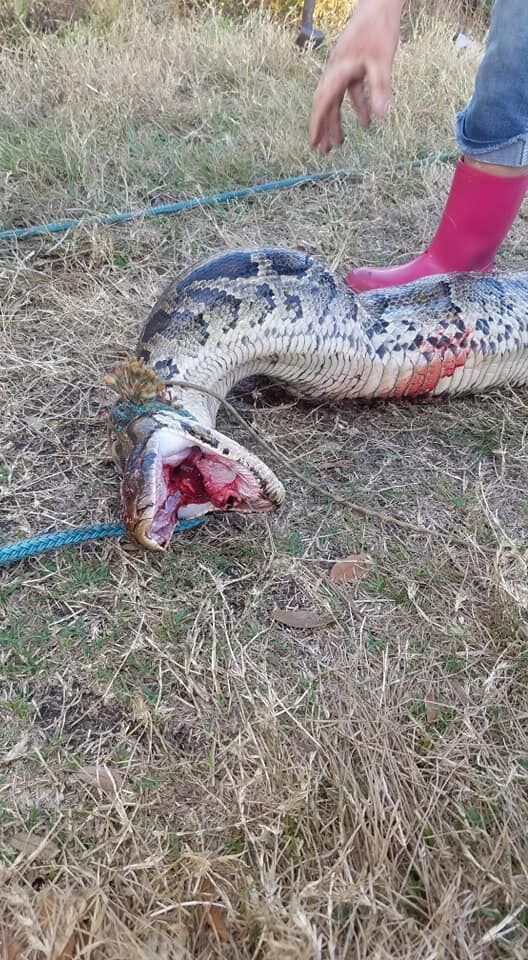 That is one giant mouth on a python killed Sunday in Zolfo Springs by Aaron Brown and his cousin and friend. 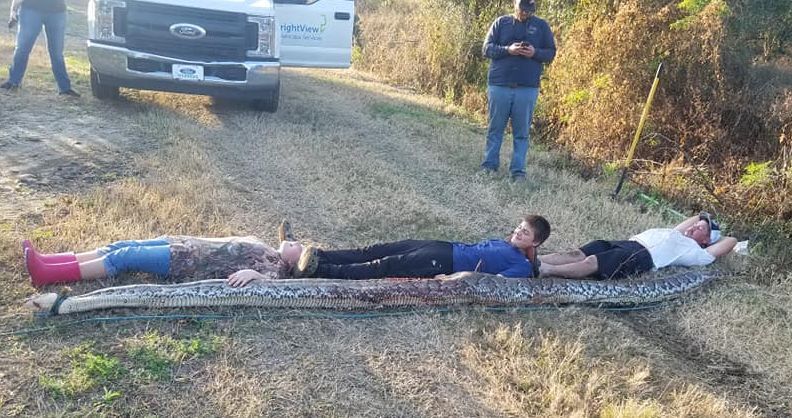 Tori and Hunter Wilkinson with Aaron Brown lay next to a python found on Brown’s property in Zolfo Springs on Sunday.

It takes a lot of people to hold a 16-foot python. From left is Tori Wilkinson, William Wilkinson, Dusty Crum and Hunter Wilkinson.

That is one giant mouth on a python killed Sunday in Zolfo Springs by Aaron Brown and his cousin and friend.

Tori and Hunter Wilkinson with Aaron Brown lay next to a python found on Brown’s property in Zolfo Springs on Sunday.

ZOLFO SPRINGS — Aaron Brown of Sebring and his mom, Pam, decided to go for a relaxing drive Sunday afternoon to a property the family has in Zolfo Springs. Spending time on the property is nothing new for Brown and his family, however, the sight of a massive python was.

Aaron said he pulled on to the property off Parnell Road when he caught a glimpse of the snake.

Some good-natured ribbing was had between Aaron and his mom. At least we hope it was kidding around.

“Go and grab it by the tail,” Arron said his mother told him. “I said, you get out and get it. At least if it gets you, I can shoot it. If he gets me, you can’t help me. You’ll probably end up shooting me.”

Aaron said he was not afraid but he knew if it got a hold of him, his mom was not going to be able to get it off of him. Aaron called his friend Dewey Sebring but Sebring thought he was exaggerating and the snake could not possibly be as long as his truck. Until, that is, Aaron sent him a picture.

“‘I’m on my way,’” Sebring told Aaron. He had an almost identical conversation with his cousin William “Bobby” Wilkinson but he left a home improvement store and headed to the property with his two kids, Tori and Hunter Wilkinson.

When they got to the property, Aaron couldn’t find the snake. After a bit, they found the snake curled up in a culvert. Ideas were kicked around on getting the snake out. Finally, Wilkinson left and brought back a “frog gig and snatch hook.”

“That’s when the fun started,” Aaron said. “We took the snatch hook and laid it on top of him and pulled his head out and shot it once. We kept pulling him out. He was still alive.”

Wilkinson shot the snake again. Aaron said the first shot just seemed to stun the snake. Once they finally got the snake out, they laid it out and, after making sure it was dead, Aaron and the two kids lined up along side it. The snake was as long as the three of them. They packed the snaked on ice.

When asked if Pam Brown was afraid of her son snake wrangling, he said she (and the others) got a good laugh out of it.

In all, the snake was 16 feet and 4 inches and weighed some 300 pounds. Wilkinson called Dusty “Wildman” Crum, a python hunter from Gaurdians of the Glades, to come take a look at the snake. Crum showed up barefoot on Wilkinson’s doorstep Monday afternoon.

Crum took the snake back to the Everglades to skin and found about 100 eggs in the snake’s belly. Crum sent the eggs off to see if they were “fertile,” according to Aaron. If they were fertile, that meant there are probably other snakes in the area. If not, the snake may have migrated to Zolfo Springs from the Everglades. Another possibility is the snake was a pet that was let loose. The snake was not microchipped.

Aaron said he and Wilkinson wouldn’t mind being part of the Everglades python hunts that take place.

He also said his children and other family members often head out to the property to hunt, fish, camp and relax and they have never seen any snakes that large out there before. Although he was told there was a large python caught in Boca Grande and Fort Meade. He will not let the python chase him off the property.

“It’s not going to slow me down,” Aaron said. “You just have to use more precautions.”

Some people have criticized Aaron. But he feels they did the right thing with the children, and animals that visit the property would have been no match for a snake that size.