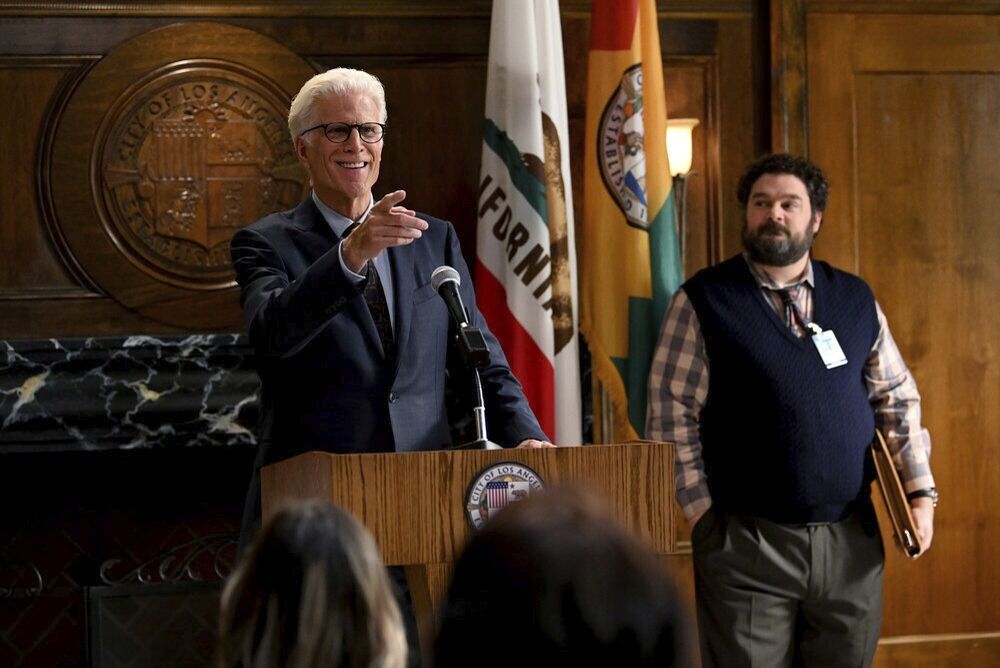 This image released by NBC shows Ted Danson as Mayor Neil Bremer, left, and Bobby Moynihan as Jayden Kwapis in a scene from the new comedy “Mr. Mayor,” airing on Thursdays. 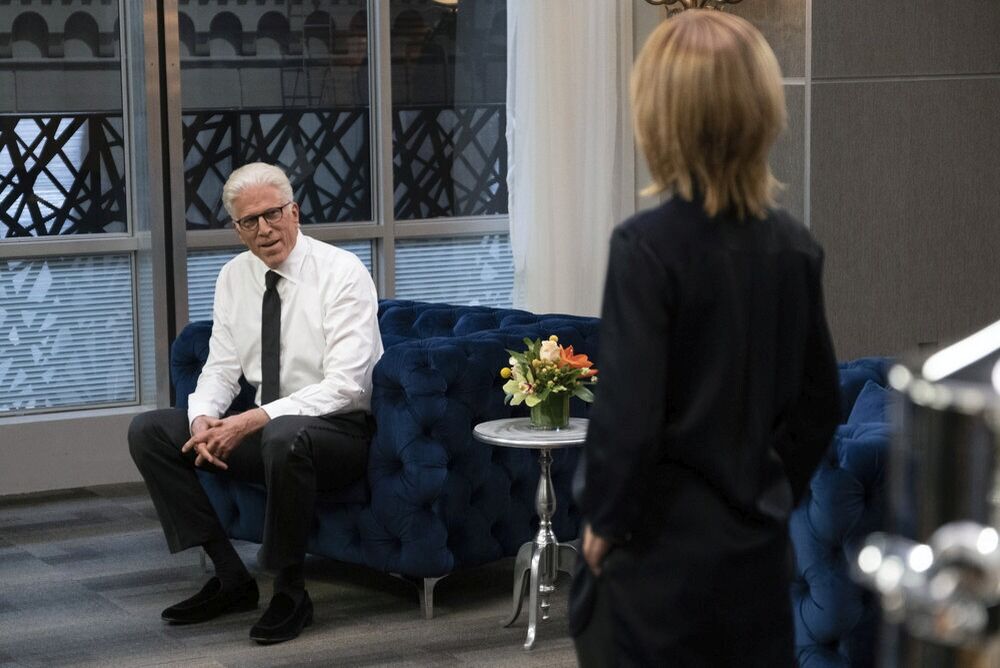 This image released by NBC shows Ted Danson as Mayor Neil Bremer, left, in a scene from the new comedy “Mr. Mayor.” 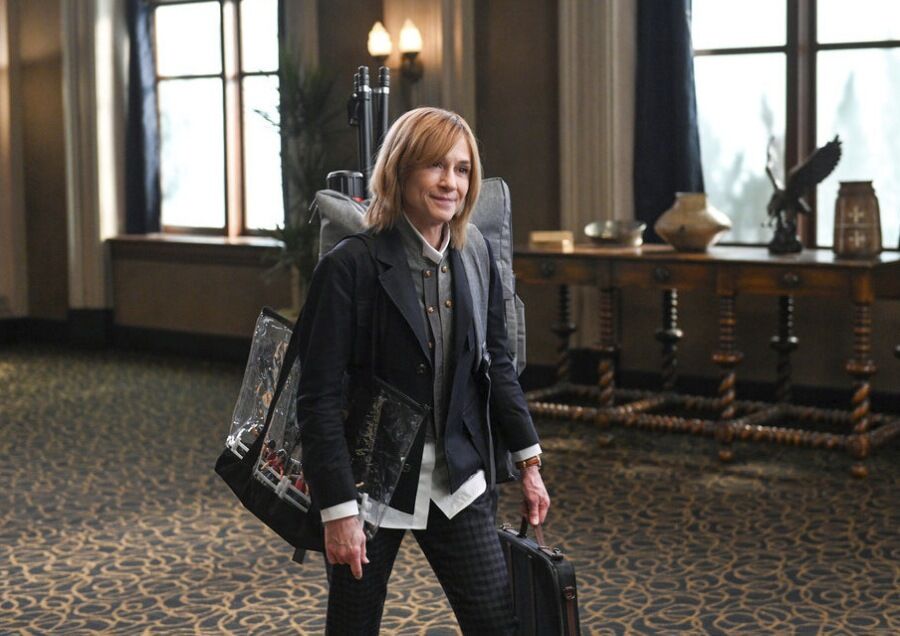 This image released by NBC shows Holly Hunter in a scene from the new comedy “Mr. Mayor,” airing on Thursdays.

This image released by NBC shows Ted Danson as Mayor Neil Bremer, left, and Bobby Moynihan as Jayden Kwapis in a scene from the new comedy “Mr. Mayor,” airing on Thursdays.

This image released by NBC shows Ted Danson as Mayor Neil Bremer, left, in a scene from the new comedy “Mr. Mayor.”

This image released by NBC shows Holly Hunter in a scene from the new comedy “Mr. Mayor,” airing on Thursdays.

NEW YORK — There’s a government office right there in the very title of Ted Danson’s new series, but the new NBC comedy “Mr. Mayor” is anything but political.

“If you consider politics the headlines in the papers and the breaking news on CNN, that ain’t us,” said Danson, who stars as Los Angeles’ mayor Neil Bremer.

“We point out the foibles and silliness, and wonderfully lovable, pathetic, lame side of humanity but we don’t stop and preach. We never are preaching.”

The show is from Emmy Award-winners Robert Carlock and Tina Fey, the brains behind “30 Rock” and “Unbreakable Kimmy Schmidt.”

Danson plays a businessman who made a fortune on billboards and then retired. He ran for mayor just to impress his daughter, a sophomore in high school played by Kyla Kenedy from “The Walking Dead.”

The new mayor is not a very polished political figure, prone to mangling Spanish and saying things like “I’m very open to a robot police force.”

He’s got a dubious staff behind him — the trio of comedians Bobby Moynihan, Vella Lovell and Mike Cabellon — and a chief rival in Holly Hunter, who plays an ultra-liberal councilmember. “Like underwear bought in a drug store, you’re not going to last two months,” she warns the mayor.

In the first episode, the mayor, hoping for a winning issue, steals the idea of a plastic drinking straw ban from his daughter and it blows up in his face. Hunter’s character offers to help — but only if he will rename coyotes as “mini-wolves.” There is satire, but nothing that might pit red states against blue ones.

“Immediately, I think the audience is alerted to the fact that we’re not going to be dissecting the Trump administration,” said Hunter. “This is not some new angle on a political conversation.”

Danson — a veteran TV star of such shows as “Cheers,” “Becker” and “The Good Place” — hadn’t worked with Hunter, the Oscar-winner for “The Piano” and star of the TNT drama series “Saving Grace.” The two instantly clicked, a pair of show biz pros.

“There are some benefits to having been around for a while, which is there is a relaxation and a recognition of, ‘Oh, I’m in good hands. This other person’s got me,’” Danson said.

The cast and crew have endured a lot during the pandemic. They shot three episodes until production had to shut down for nine months. The cast kept in contact during the hiatus, even going over scripts virtually.

“We had jam sessions Zooming together and I think in a way that created a certain feeling of tightness,” Hunter said. “We would just read a new script just to hear it between us. You know, it formed a different kind of bond.”

When they all reunited, a TV set designed for a fast-paced, whacky comedy now had real-world boundaries — face masks and shields, social distancing, daily COVID-19 tests and van rides that held only one actor.

“It’s all very different. They’re a little bit sad, a little bit lonely because the kids don’t get to rush into the playground and embrace each other because we’re so happy to be working,” Danson said.

“The first day or two, it’s weird. And then all of a sudden you get used to the new normal,” he added. “After years of doing this, when they say ‘Action!’ and you’ve taken the masks all off, it comes back.”

But Danson is quick to put it in perspective. “It’s tricky as actors to talk about sacrifices,” he said. “We came back after nine months of the pandemic where the whole world saw who the heroes were, who the celebrities really were, who the people were that really, truly put their lives on the line.”

The time off might actually have helped the show, giving the cast time to digest the rat-a-tat scripts, which are stocked with Carlock and Fey’s astute cultural observations and sometimes absurdist flights of fancy.