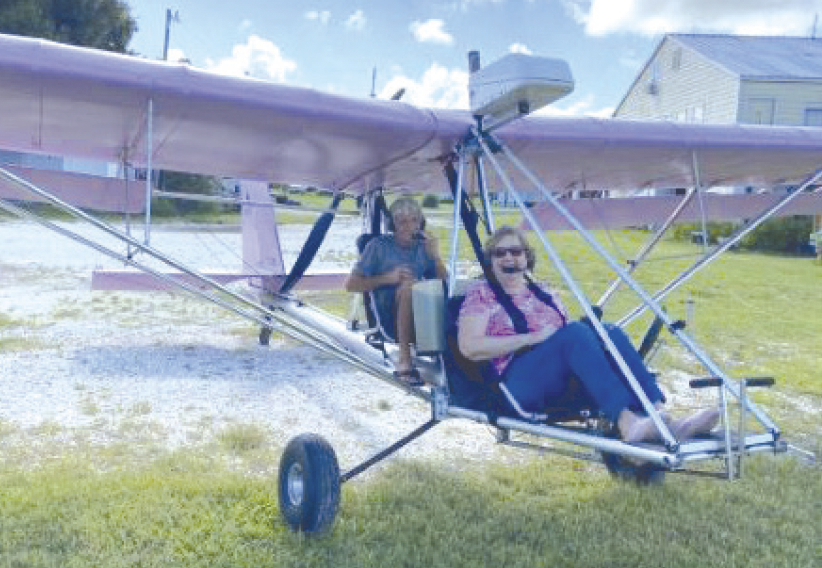 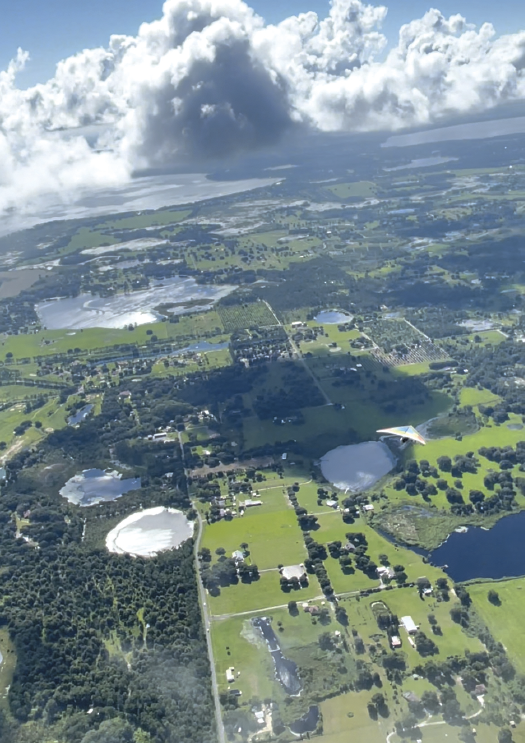 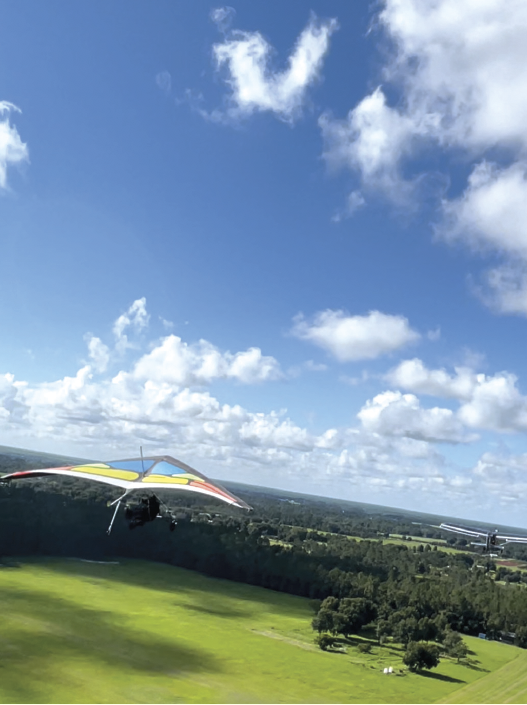 It was a beautiful day for a flight.

It was a beautiful day for a flight.

Looking to do something out of the ordinary? Something that will literally expand your horizons? Consider hang gliding.

Hang gliding is an air sport or recreational activity in which a pilot flies a light, non-motorized, foot-launched, heavier-than-air aircraft called a hang glider. Most modern hang gliders are made of an aluminum alloy or composite frame covered with synthetic sailcloth to form a wing.

According to an article by Paul Glenshaw in the August 2019 edition of “Air and Space” magazine, hang gliding grew in popularity in the 1960s and 1970s after Francis Regallo “created the first flexible winged craft” in the late 1940s.

Here in Lake County, you might not find a greater enthusiast for hang gliding than Eric Williams.

“I’m the kind of guy who did everything: scuba, motorcycles, airplanes, but this – hang gliding – trumps everything,” said Williams, owner of Groveland-based Paradise Airsports, who emphasized this is a sport in which anyone of any age can participate. “This isn’t an elite sport, and it is a safe sport with an instructor on a tandem flight. I have taken my 3-year-old grandson up on a flight, and I’ve also gone up with a 93-year-old man.”

A certified instructor, Williams wants to expand the number of people participating. However, plans he had to offer an internship program at Lake County’s community college were put on hold in 2020 due to the COVID-19 pandemic. But he isn’t deterred, as he deems it necessary to train future generations.

“We need more youth in this sport,” he said.

Before you are strapped into the hang glider and then towed by an ultralight plane to 2,000 feet and released with the instructor guiding the glider, there is on-the-ground training.

Another aspect is assembling the glider. At Paradise Airsports, Yaro Posado, took about 20 minutes to assemble his glider. A “regular” who also is certified, he said he has flown 40-50 miles in one flight.

The adventure begins with the person hooked into a harness, along with an instructor, according to Victoria Nelson, who oversees daily operations; she also serves as a “chauffeur” ferrying those who have landed back to an area where spectators are seated.

A couple from Satellite Beach, who have enjoyed activities such as kite boarding and jet surfing, awaited their first-ever hang-gliding adventure.

“This is just something to do on a weekend day,” one of them said, declining to provide their names.

Meanwhile, one spectator, a mother, cheered on her son who was working toward his solo certification. However, she was greatly relieved when he was back on ground.

As for Williams himself, he served in the U.S. Coast Guard and offers veterans rides in his planes and hang gliders as his way of saying thank you for their services. In fact, many of the hang-gliding enthusiasts are military personnel.

Others, like Williams, are airplane pilots. He underscored a difference between flying a plane he owns (which he refers to as a truck and just a way to get back and forth) to hang gliding.

“With my ‘truck,’ I have to follow flight plans, and all of the rules of operating an aircraft.  With a hang glider, I am free to do what I want,” he said.

Williams, along with two close friends, purchased property from a Groveland family who had owned it since the 1880s. The airstrip and several hangars were built to serve their crop-dusting business. Williams developed some of the property, naming it Wilotree Park, adding an RV and camping site complete with a fishing lake and swimming pool. Williams also renovated one of the hangar buildings into guest suites.

The property has been the site for music festivals and fly-in breakfasts. Last year, his company sponsored the 2020 World Hang Gliding Championships. Pilots from all over the world met to compete in exercises with their gliders, testing the ability of the pilot and the glider and its equipment.

Paradise Airsports operates Thursday–Monday at 6548 Groveland Airport Road, Groveland. It is recommended that reservations be made one to two weeks in advance. Flights are dependent on weather conditions.