Wilgus, second from left, with a few other Female Engagement Team members while in Afghanistan, 2012. 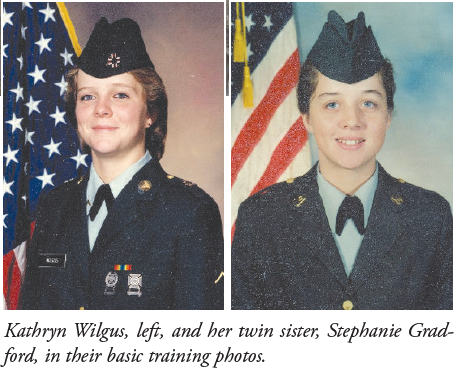 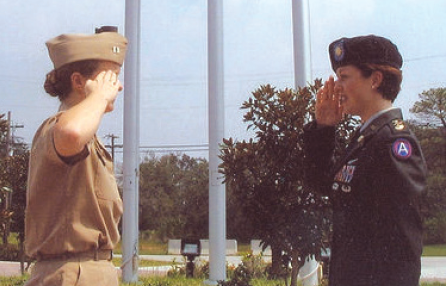 When Wilgus joined the Navy as an officer, her sister was there and promoted her to her next higher rank. “She was my first salute,” Wilgus said. 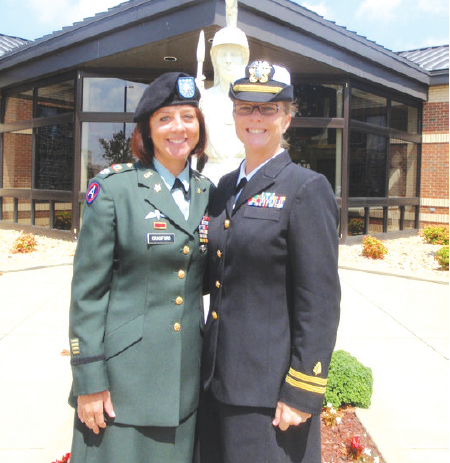 The twins in front of the US Army Women’s Museum in Fort Lee, Virginia, when Gradford was promoted to lieutenant colonel. 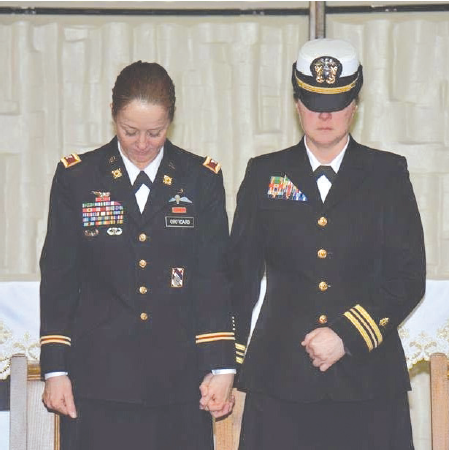 Wilgus, right, and her twin bowing their heads in prayer at Wilgus’ retirement ceremony in 2016 at Little Creek Naval Base, Norfolk, Virginia. 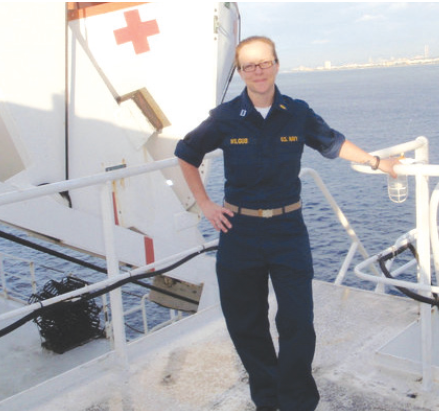 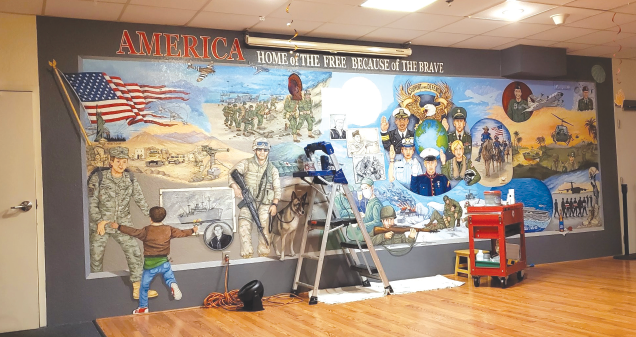 Wilgus commissioned artist Cary diValentin to create this mural displayed at the American Legion Post 35 in Mount Dora. Gradford and her son are depicted in the lower left. Photos courtesy Kathryn Wilgus.

Wilgus, second from left, with a few other Female Engagement Team members while in Afghanistan, 2012.

When Wilgus joined the Navy as an officer, her sister was there and promoted her to her next higher rank. “She was my first salute,” Wilgus said.

The twins in front of the US Army Women’s Museum in Fort Lee, Virginia, when Gradford was promoted to lieutenant colonel.

Wilgus, right, and her twin bowing their heads in prayer at Wilgus’ retirement ceremony in 2016 at Little Creek Naval Base, Norfolk, Virginia.

Wilgus commissioned artist Cary diValentin to create this mural displayed at the American Legion Post 35 in Mount Dora. Gradford and her son are depicted in the lower left. Photos courtesy Kathryn Wilgus.

If there’s one thing Kathryn Wilgus would like people to know when they see a woman wearing a baseball cap with the word “veteran” on it, it’s that they shouldn’t assume she is the wife of a veteran. Perhaps, Wilgus said, that woman is a veteran herself.

Wilgus should know. Retired from service in 2016 as a U.S. Navy lieutenant commander, she dedicated two decades of her life to serving her country. Wilgus spent many of those years as an operating room nurse, trauma role 3, “taking care of our wounded from the front line,” she said.

When wearing a veteran’s hat herself, Wilgus has had people ask her, “Is that your husband’s hat?” or they ask her husband, retired Navy veteran Paul Immordino, “Is she wearing your hat?”

Wilgus is irked by these questions that disregard the possibility that a woman could be a veteran, noting, “It’s very disheartening, because we’ve been in harm’s way, and we die.”

The retired lieutenant commander added, “Valor has no gender. We’ve been serving in combat since the Spanish-American War, and it took 200 years of volunteer service before we were granted veteran status.”

Wilgus, MS, RN, PGCE, CNOR-E, began her military career in 1987 as a U.S. Army private and operating room technician. She enlisted because she didn’t feel she had any other options, having dropped out of high school and not having funds to go to college. The decision opened the door for her to pursue a medical career, and after nine years, she left the Army as a sergeant and earned a bachelor’s degree in nursing in 1997.

Wilgus, who had followed in her twin sister’s footsteps in enlisting in the service, said, “I have been blessed to share the love of service and sacrifice of the military with my twin – different branches and different careers, but still of service.”

Her twin, Stephanie Gradford, is a retired U.S. Army colonel and an Iraq, Kuwait and Afghanistan combat veteran with two bronze stars.

“She is also my hero,” Wilgus said. After years of both sisters traveling far and wide, the two, who grew up in Miami, now live near each other, with Wilgus in Mount Dora and Gradford, currently in Gainesville, having recently purchased a house in Tavares.

To promote and honor all men and women who serve, Wilgus commissioned an artist to create a mural at American Legion Post 35 in Mount Dora. In the lower left of the image, Gradford and her son are depicted.

Also at Post 35 is another impressive mural Wilgus helped bring to life that celebrates women in service, from the Revolutionary War through to the war in Afghanistan. Each conflict is represented by a woman who served, with Wilgus represented in the most recent conflict.

Wilgus said after she earned her nursing degree and worked several years in the Florida Hospital Health System in Orlando and Altamonte Springs, as well as at a psychiatric ward at Lake Correctional Institution and other places, she was ready to return to service, but this time as an officer.

In 2004, she was direct commissioned as a lieutenant junior grade in the Navy Nurse Corps Reserves, and her sister promoted Wilgus and was her first salute, as shown in the adjacent photo.

“My sister was also my last salute [before retirement], but I can’t find that photo,” Wilgus said. Because of their career paths, the two “haven’t spent a lot of birthdays together, but we’ve been able to make some important milestones together,” Wilgus added.

As a Navy officer, Wilgus found herself in harm’s way, specifically in Afghanistan, where she worked beginning in 2010 as part of a Female Engagement Team, as well as a Medical Embedded Training Team member in the northern territory of Mazar-e Sharif.

Wilgus, who said she used to love watching “M*A*S*H” as a kid, said, “My goal in life was always to take care of our troops in the field. Once I chose medicine, I wouldn’t feel like I’d achieved, unless I took care of our guys in combat.”

When she was enlisted in the Army, she wanted to get to Iraq as an operating room tech, but it didn’t happen.

“I never got to Iraq. The funny thing is, I always felt like, and most veterans do – some of them – never feel like you’ve served until you’ve gone to war or experienced some other type of sacrifice,” Wilgus said.

She had that opportunity in Afghanistan.

“So now, it was like, my life goal? I’m going to achieve it. Some people want to have kids, family, a car. I wanted to take care of our troops in combat,” she said.

Embedded with Afghan physicians, she risked her life daily in the combat zone. Working as an operating room nurse in the trauma hospital of Kandahar, she faced numerous challenges: Walking in public, where you had to “keep your head on a swivel,” because you couldn’t always tell who your enemy was. Wearing a scarf whenever she left the U.S. FOB – forward operating base – and making a habit of always being armed, even when in her scrubs. Choosing to confront an Afghan doctor who planned to remove a soldier’s one kidney, which would have led to his death. In that instance, the physician listened to her, and the wounded man was shipped out of the country and treated successfully for kidney stones by American doctors.

Today, Wilgus is active in her community and volunteers as vice president of Villagers for Veterans, which currently is focused on building Ashley’s House, a transition home in Eustis designed to aid female veterans at risk of homelessness due to physical injury or other challenges.

Wilgus understands the challenges of life after war.

“Do I have issues now? Yeah,” she said. “But you know what, everybody has issues. I have PTSD. I have my trauma. But I wouldn’t change it in any way, because everybody has something wrong with them, right?”

She added, “What matters to me is my legacy, to know that I saved a life.”