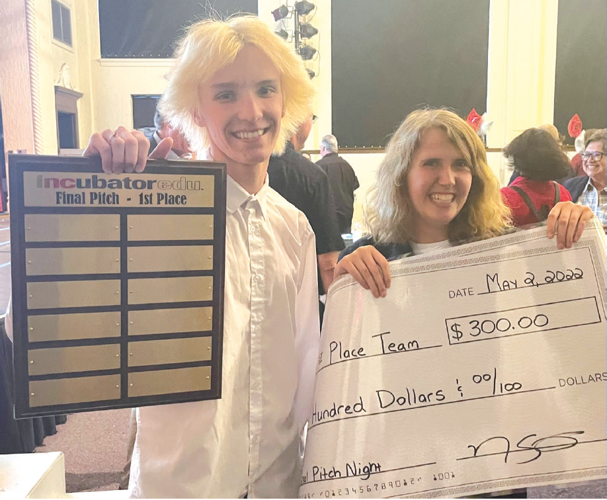 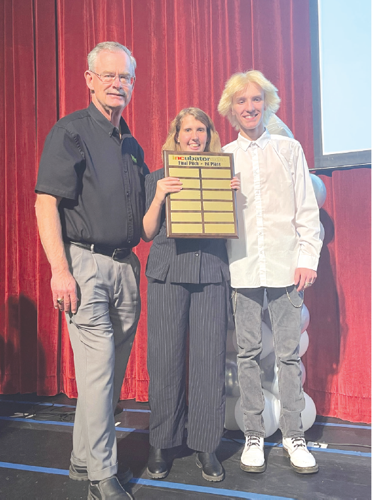 When Evan Minnis heard about a national entrepreneurship program that was launching at Tavares High School and Eustis High School last fall, he knew he wanted to be part of it.

A student at Tavares High School, Evan had already started his own clothing brand known as Social Loneliness, featuring street wear and skate styles that are popular with young people. When he tried to get the business off the ground, however, he quickly realized how difficult it was to source producers to make the clothing that he designed.

That’s when the idea for Couture on Demand was born.

“I decided to make a business that kind of filled in that gap between clothing designers and clothing producers,” Evan said. “So, we just make an easy one-stop shop between the two of them. Just one click and your clothes are on the way.”

On Tuesday evening, May 2, Evan and his Couture on Demand teammate Shanna Staffe won first place in the INCubatoredu Final Pitch Night, taking home a check for $300, in addition to the $100 they won for winning the People’s Choice vote among the audience members at the Tavares High School Auditorium.

A national program that provides a specialized curriculum to hundreds of member schools in over a dozen states, INCubatoredu uses online instruction materials, provides consultation on how the classroom is designed, has a framework with coaches and mentors, and provides professional development and resources for the year-long course.

Sauerbrey, who teaches promotional enterprise, said it’s been rewarding watching the students grow over the last several months, and she was proud of all of them as they stood up on the stage, showing judges, mentors and the rest of the audience everything they learned this year. Sauerbrey said the program received support from the Tavares Chamber of Commerce, which hosted the students at a luncheon in February where they made their initial pitches. Several mentors and coaches also stepped up to help get the program off to a great start. The program will expand next school year to East Ridge High School in Clermont.

“It was amazing,” Sauerbrey said of watching the students participate in the program’s culminating event. “It was like almost a blessing, just watching all their hard work pay off, and everything we’ve worked for all year. I’m just very proud of them.”

Lynnea Weissman, program specialist with Lake County Schools’ College and Career Readiness, said she was impressed by the students and everyone who helped make the program’s first year a success.

“I cannot believe how amazing this has gone for the first year,” said Weissman, who also serves on the program’s advisory board. “And all the credit in the world goes to the teachers.”

Cyr, who teaches entrepreneurship, said it was great to see how much the students had learned and grown throughout the year.

“It’s so rewarding to see that. It exceeded my expectations,” she said. “I’m very fortunate I get to teach entrepreneurship, because it’s something they can actually use today, right now in real life and be successful with in the future.”

Erika Buigas of the Tavares Chamber of Commerce served on the program’s advisory board and as the final event’s emcee. She said the program is a great opportunity for students “to do something different, something out of the box, meet those players in the community that get things done.”

Months after seeing the students make their initial pitches to the chamber luncheon, Buigas had a close-up view of the progress the students have made as they presented their final pitches.

“It has completely changed,” she said. “You see them settle into themselves, settle into their products and get more comfortable speaking in front of people. It’s scary; that’s a terrifying thing to do to jump up there and talk to a roomful of strangers. But they have handled it with grace and a lot of hard work.”

Don Magruder, CEO of RoMac Building Supply, was one of several members of the local business community who served as mentors for the program. Magruder, who has been involved with several house building projects with high school construction academies and serves on school advisory boards, said this program was the most rewarding thing he’s ever done with the schools.

“I got to work with some great kids, mentor them, and they’ve learned a lot and they’ve done a great job. Quite frankly, they’re just tremendous kids,” he said. “Most people have the wrong attitude about young kids. They just need our guidance and help. This was really rewarding. I’ve gotten more out of this than they probably got out of me.”

For more information or to volunteer as a coach or mentor, email Sauerbrey at sauerbreyn@lake.k12.fl.us.