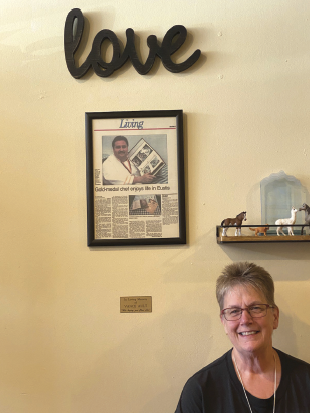 Former owner Karen Ault stands beneath a picture hanging in the restaurant of her husband, Vance Ault. 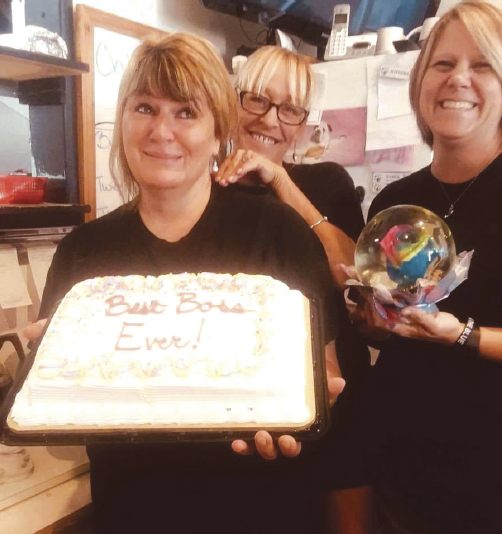 Lori Pittsley with a cake given to her on Bosses Day by her Jeannie’s  “family.”

Former owner Karen Ault stands beneath a picture hanging in the restaurant of her husband, Vance Ault.

Lori Pittsley with a cake given to her on Bosses Day by her Jeannie’s  “family.”

Jeannie’s Place has been a fixture in Eustis for almost 30 years! Jeannie’s is a unique restaurant that serves breakfast and lunch with a feeling of home. The restaurant’s namesake, Jeannie, was owner for only two years, and Karen and Vance Ault bought and ran the restaurant for 20 years, with Vance as the chief cook. Lori Pittsley is the current proprietor, and she has breathed new life into Jeannie’s Place for the last seven years.

Owning a restaurant was never really a dream for Pittsley, though her parents had both owned bars when she was young, and she was trained on the grill to cook and serve bar food. instead, she and her husband ran a transportation business. With her husband/partner on the road for much of the week, Pittsley decided to look for parttime work that would get her out of the house. One day, her husband suggested they eat at Jeannie’s Place. Pittsley had never heard of Jeannie’s, though it was only three blocks from their house. That day, there happened to be a sign in the window: “Part-Time Cook Wanted.”

After a sumptuous meal, which included a Webster Omelet, (still on the menu today), Pittsley asked Karen Ault for the part-time job and was hired on the spot. The full-time cook taught her the ropes and quit two weeks later. So, Pittsley found herself the full-time cook. Five or six months later, Pittsley overheard Ault talking with potential buyers of the restaurant. Times were hard for Ault, since her husband had passed away, leaving her as sole proprietor of the restaurant. When Pittsley learned that Ault had no serious buyers, she said, “I’ll buy it!”

As Pittsley tells the story, “Karen practically threw the keys to me.”

Pittsley asked Ault to stay and help her, and she agreed.

“I love a good makeover,” she added.

And that is how Pittsley “stumbled into her calling.” She said she loves people and “knows no strangers.” She has built up a loyal following by word of mouth and on social media. She has also built a team of devoted employees, Pittsley added, saying her staff consists of “11 family members, including myself.”

Since that first day, Jeannie’s Place has undergone three makeovers.

“As I made money, I put every cent back into Jeannie’s. Since the beginning, I have replaced the kitchen equipment, bathrooms, lighting and of course décor,” Pittsley said. Structural changes included acquiring additional space next door for group parties and meetings. “The most recent makeover was to repaint in softer colors, add new walls, flooring and a new counter.”

Regulars come in for the daily lunch specials, including Monday’s Meatloaf and Friday’s Fish Fry. Jeannie’s most popular dishes are the Country Jule breakfast (a mound of biscuits, country-fried steak, cheese and gravy topped with eggs and shredded cheddar), the Greek Omelet, and plate-size pancakes. The blueberry pancakes feature wild Maine blueberries.

By the time the pandemic hit, since most of Jeannie’s business is dine-in, the restaurant had to shut down for one month. As soon as state regulations allowed restaurants to reopen, Jeannie’s place was back in business. They erected a large tent in the parking lot for a couple of months, customers were very supportive, and staff did more cleaning and sanitizing, , replacing condiment bottles on tables with individual packets. On the whole, the business continued to thrive. Jeannie’s Place now has permanent outdoor seating.

Pittsley says this season has been much busier than she anticipated, due in part to senior patrons being vaccinated, and venturing out again.

“My next project (because there always is one) is to make a more aesthetic outdoor area,” she said. “I find that people are enjoying the outdoor dining option.”

On July 4, Jeannie’s will be celebrating seven years in Pittsley’s capable hands, with Karen Ault still by her side. Ault is especially helpful in coordinating Jeannie’s catering business.

Jeannie’s Place is “one of the few restaurants that has not raised prices in over two years. We have absorbed a ton of extra food costs related to COVID-19. I will eventually have to implement a modest price increase just to offset the craziness of the world right now but am holding off until the last possible minute,” Pittsley said. “I do not plan on becoming a millionaire serving breakfast, I just need for us all to make a living.”