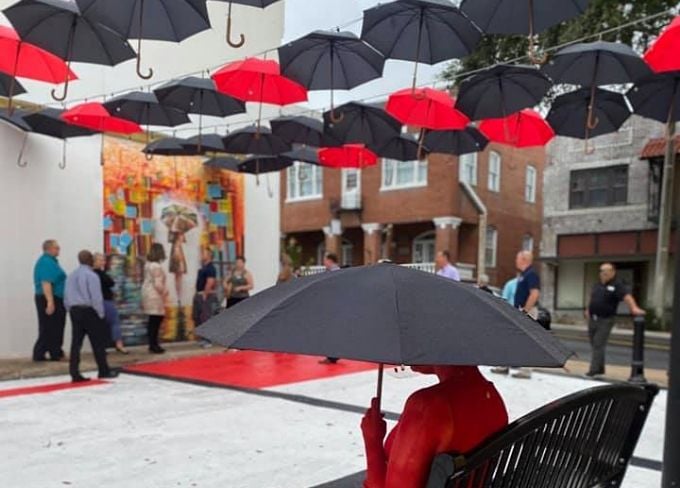 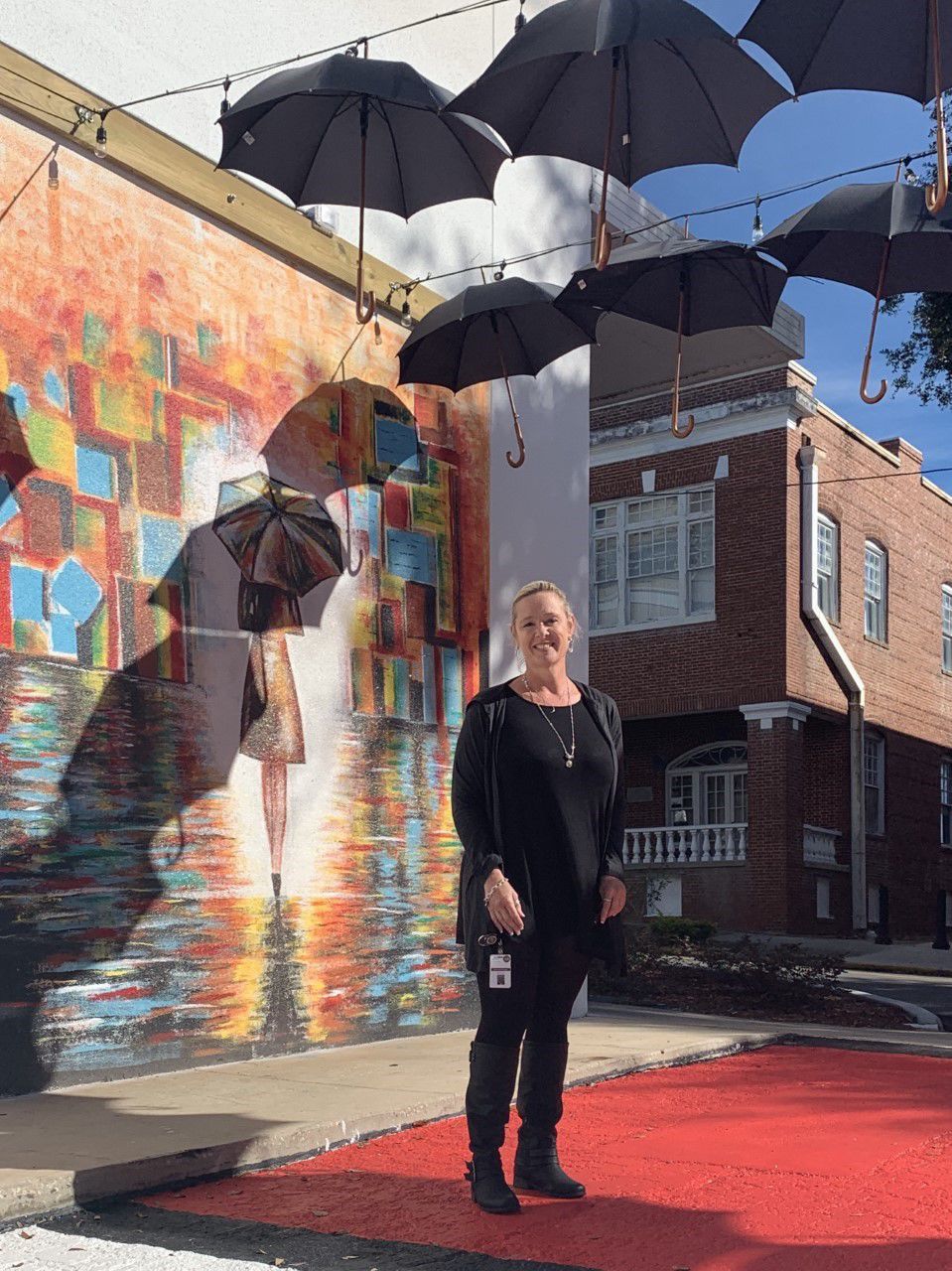 Jane Waters, the project manager for the Haines City CRA, says the project is supposed to “create something that popped and brought attention to the city.”

Jane Waters, the project manager for the Haines City CRA, says the project is supposed to “create something that popped and brought attention to the city.”

HAINES CITY – In a tucked away space in downtown Haines City is an art installation so interesting and unexpected it’s enough to stop traffic.

Seeming to float midair are rows of black and red umbrellas, with a brightly-painted mural as a complement. The painting depicts a woman walking away, holding an umbrella.

Part of the city’s “Art Alley” project, the installation — located behind the Citrus Growers Commerce Bank at 501 East Main Street — is described by city staff as just another addition to the growing number of works scattered through the city.

Take a stroll, either this way or that, and residents are likely to stumble across other works, including the city’s Wings mural project that features various types of wings — be it angel wings, butterfly wings or something else — painted throughout town.

So far, there have been four phases of the art installations in the downtown Haines City area and, according to Jane Waters, the works are a transformative tool in redevelopment.

Waters, the project manager for Haines City’s Community Redevelopment Agency, has joined forces with other art lovers in town to use the mediums to benefit the city.

“We see other cities like Mount Dora and Winter Park that have used art as a tool to bring people into the downtown area and, as a byproduct of that, sales to our businesses,” she explained.

Waters said that it took a group effort to make the umbrella project happen.

“This was a complete transformation of the space,” she said. “We wanted to create something that popped and brought attention to the city.”

Local artist Enos Torres donated his time to create the huge mural, designed on a wall that previously had been nondescript.

The Wings project has been included in Visit Florida’s “A Statewide Tour of Florida’s Mural Art,” featuring attractions from Key West to Pensacola.

“I wanted the umbrella project to be elegant,” Waters said. “People go to beautiful spaces.” Another phase of the art installations lies on a now closed street in the north part of downtown. A huge abstract design leaps off the cement and was designed by high school students and painted by elementary school children.

On the east side of town, a large mural was painted in a nod to the hispanic population of the town.

The installation of each phase is permanent, except that the umbrellas will change with the seasons — color appropriate umbrellas will be airborne depending on the time of year.

The Art Alley is part of a new, recurring monthly event in the same area. “Finally Friday” will be held the last Friday of each month and will feature an array of cuisine from numerous food trucks and other activities.

In February, the city will launch a campaign that allows residents to name the installation and name the completed piece.

“‘Art Alley’ is the name of an ongoing program which, through creativity, will revitalize hidden areas of our city, creating locations for activities, gatherings, photo opportunities and placemaking,” Waters said.