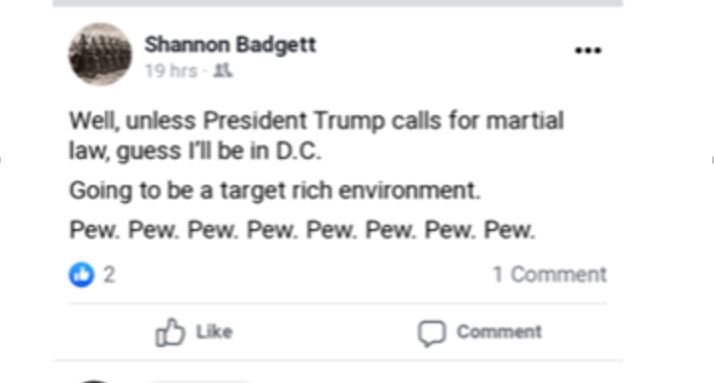 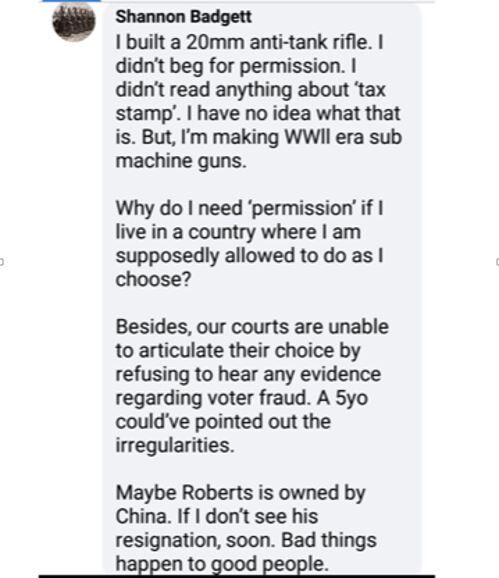 Haines City Police have announced an arrest made Tuesday, Jan. 12, of a local man for making threatening remarks about carrying out violence on the nation’s capital.

Shannon Badgett, 53, is being being charged with communicating a written threat to conduct a mass shooting or act of terrorism. The threats made via Facebook were reported by one of Badgett’s Facebook contacts.

Badgett’s post included a reference to the ongoing election controversies, “…our courts are unable to articulate their choice by refusing to hear any evidence regarding voter fraud.” Badgett also made posts about going to a “target rich environment” in Washington D.C. if President Donald Trump did not declare martial law.

The post adds “Pew. Pew. Pew” to insinuate the firing of shots.

He added that a lot of good people were going to die if “Roberts” did not resign – a possible reference to Supreme Court Justice John Roberts. In that post, Badgett claimed to be building an anti-tank rifle and sub-machine guns without applying for permitting. In his post, Badgett wrote that the government can’t tell him what to do.

Badgett, a former police officer in Ohio, was investigated by the Federal Bureau of Investigation on Monday after allegedly sending emails to a circuit judge in Nevada. Badgett denied sending those emails.

Family members told detectives that Badgett has been diagnosed with mental health disorders. There were no guns in the home.

Badgett acknowledged writing the posts, but insisted that he had no intentions of harming anyone. He said the posts were a way of expressing his frustration with voter fraud and that he was free to post whatever he liked.

Badgett was transported to the Polk County Jail with a Baker Act form. His mental health will be evaluated. A risk protection order was served on Badgett to restrict his access to guns and ammunition.

“Given the high political tensions of late, these threats simply could not be ignored,” Haines City Police Chief Jim Elensky said. “Our detectives acted swiftly to ensure that these posts did not escalate into actions here or anywhere else. For the safety of everyone around him, he will be evaluated mentally to ensure he has access to the help he needs.”